Posted on September 30, 2013 by Adrian Armstrong

Over the September Long weekend, Andrew, Ryan and I decided to head up to the UBC Varsity Outdoor Club’s Harrison Hut, located near Harrison Hot Springs about 75 km West of Pemberton. The hut is about 30 years old, but has seen very infrequent use in recent years due to difficult access following a landslide destroying a section of the access road a few years ago. Many volunteers with the VOC have done a great job working on a new trail, at this point there is a trail marked with blazes for about 50% of the trail, with frequent flagging tape for the remainder.

After a 90 minute detour to Darcy, (All the google earth research of peaks in an area does little good if you don’t read the road directions to the trailhead) we got started on the trailhead around 10:30am. The trail meanders through heavy woods for about an hour before meeting up with a logging road, then back onto some basic trail/flagged bushwhacking that includes plenty of side hilling.

Andrew on one of the dry river beds. 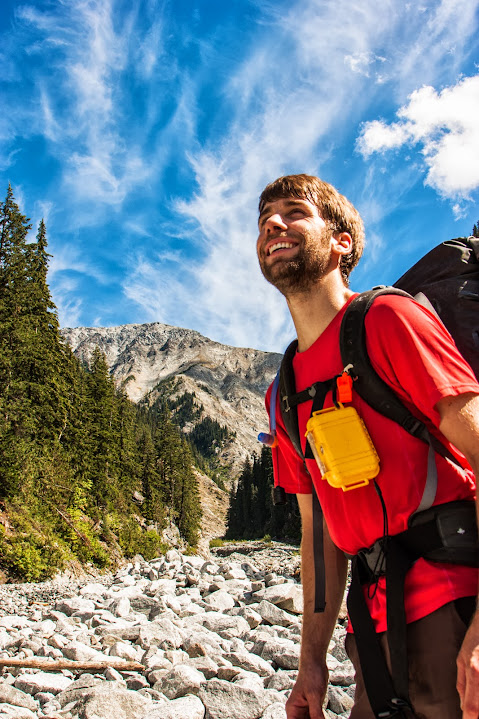 Access for our trip was complicated by the fast moving outflow from Barr Creek, which is crossed about 3km from the hut. We helped out with putting the bridge across this river section together over the weekend, but our first few crossings required more creativity. 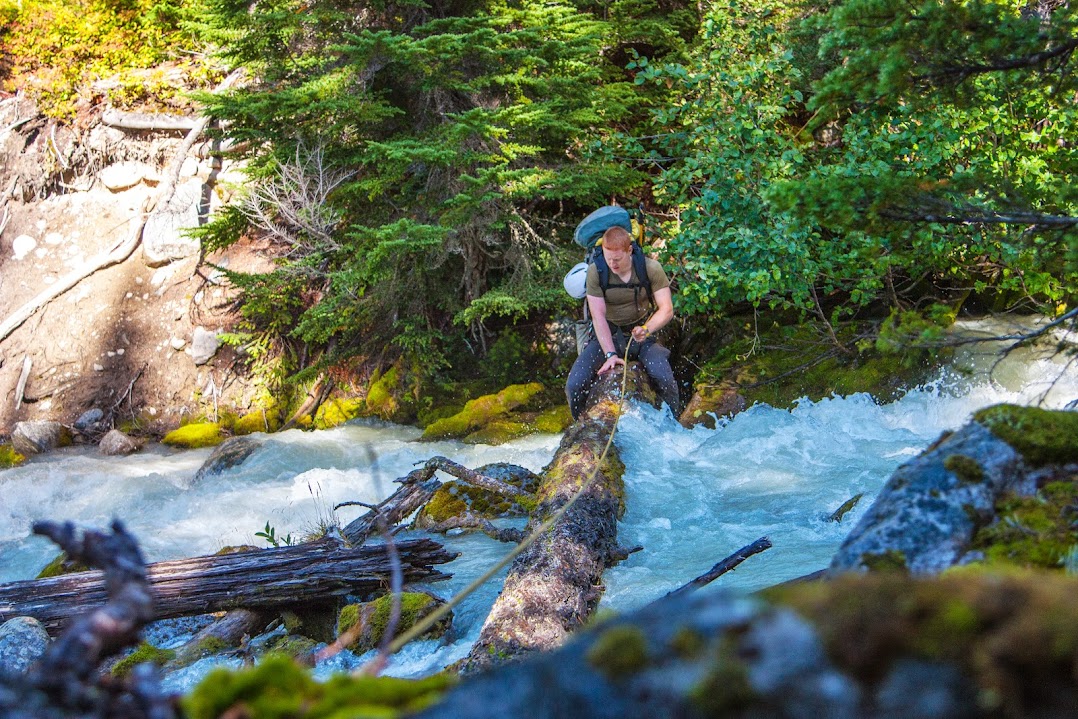 Total time from trailhead to hut was about 5:40, when we arrived we moved a bridge section most of the way back to Barr Creek, then returned to enjoy some view and rest our feet.

Resting our feet outside the hut with Zygo peak in the background. 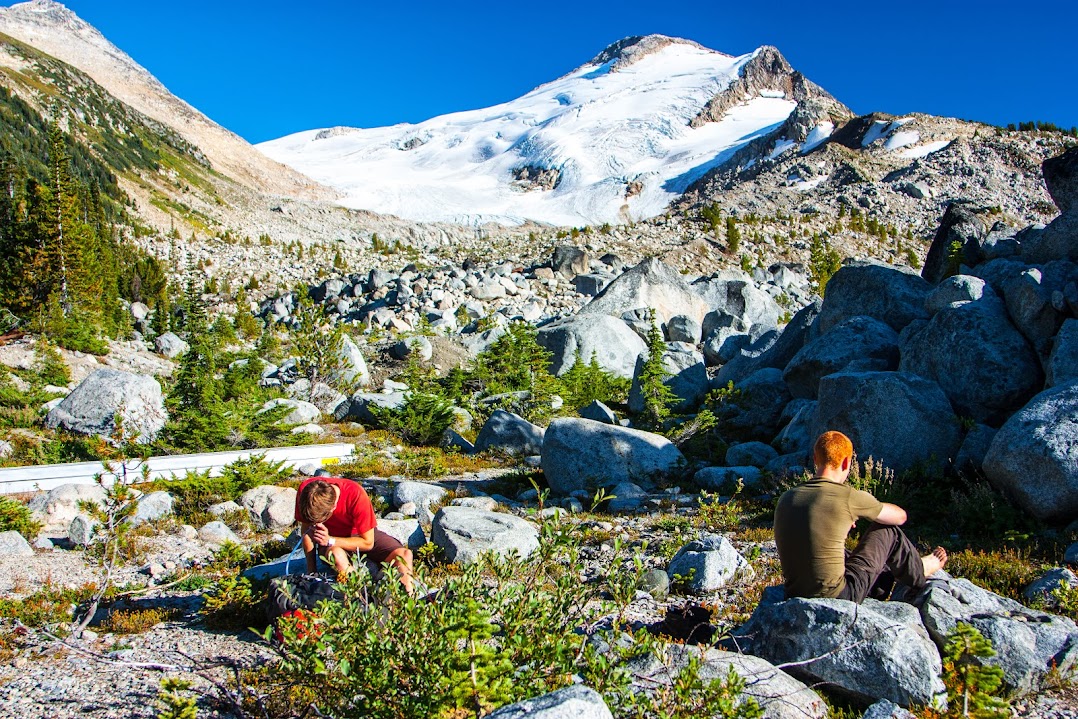 The Hut itself is a large gothic A-frame with a loft that sleeps about 15. 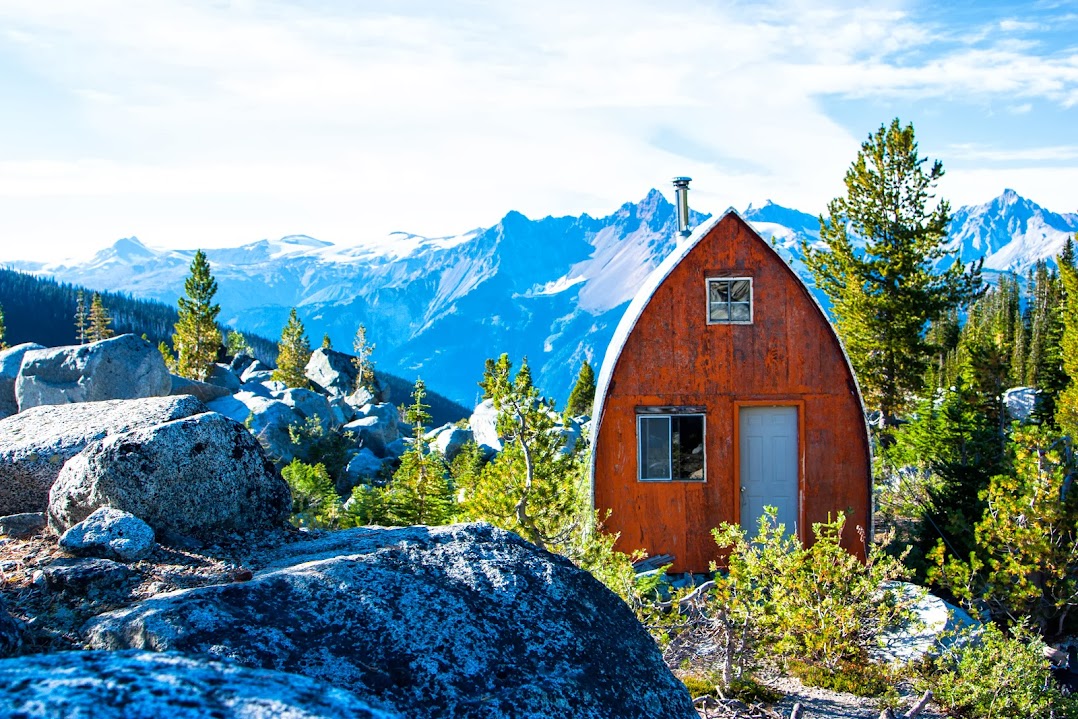 We enjoyed some dinner then went to sleep early with ambitious plans for the following day. 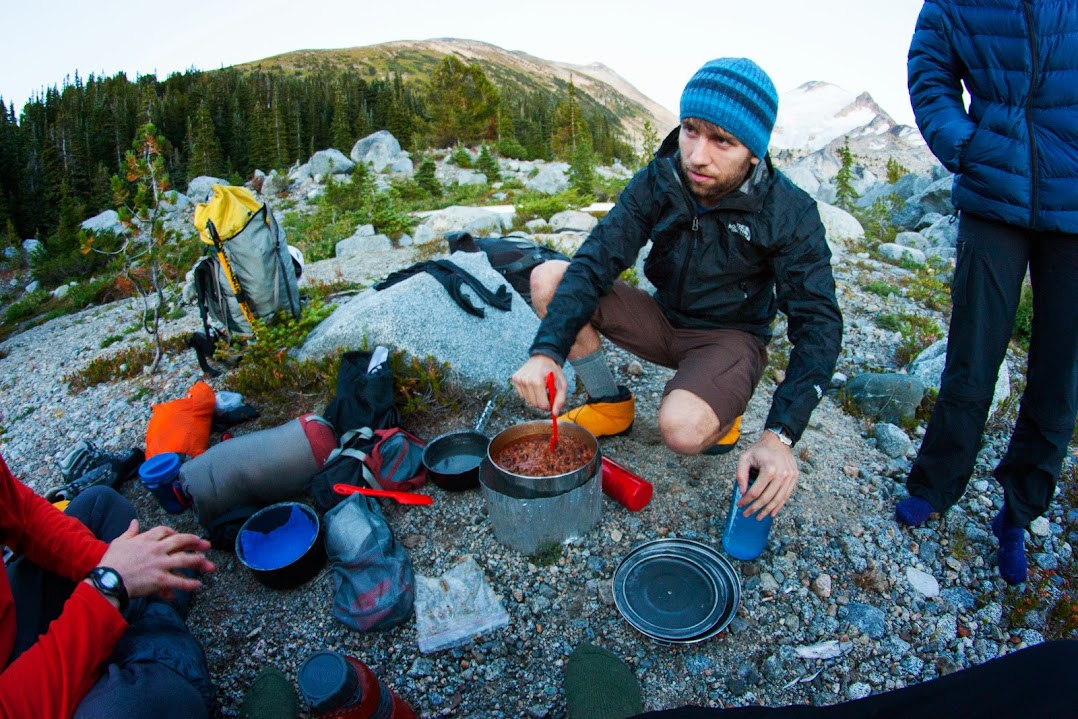 Our overall goal for the day was to bag Overseer peak, which is the highest summit in the Pemberton Ice Fields. Our planned approach was to travel up part way up the basin between Frozen Boot and Zygo peak, then ascend directly North onto the ridge that leads to Frozen Boot peak. Following this we would cross the mad Horse glacier, then summit Overseer and descend Overseer to the NE and reconnect to the route described in Matt Gunn’s scrambles book.

We got on the move a bit before 7 it was fairly fast going, so shots were pretty infrequent during the first few hours. There was some great light as the sun was rising over the mountains.

The view looking back towards Pylon Peak, just before we started climbing the ridge towards Frozen Boot Peak.

The view from the summit of Frozen Boot, looking North towards Mad Horse Peak (right) and Mt. Overseer (center). We would eventually cross the rocky section above the heavily glaciated terrain between the two mountains. 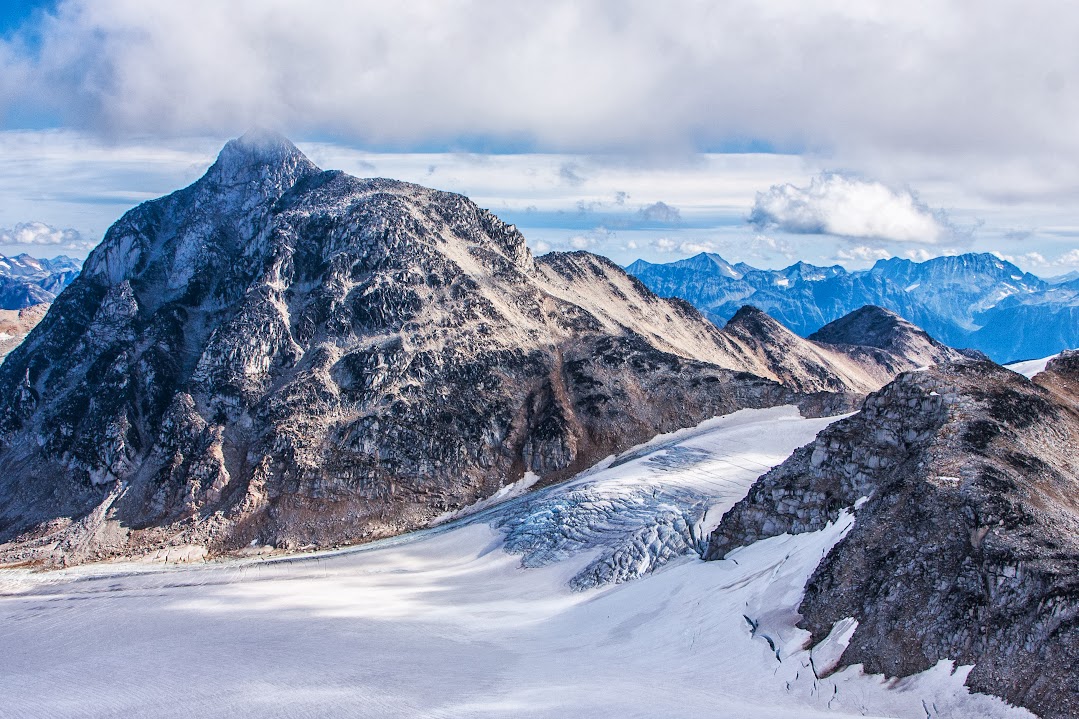 Downclimbing the North East side of Frozen Boot was fairly involved, with a lot of sidehilling over choss with plenty of exposure. To be honest, if we’d had a second rope, I think we would have rappelled at least one section, rather than side-hilling above some of the cliffs.

Starting down the N side of Frozen Boot. 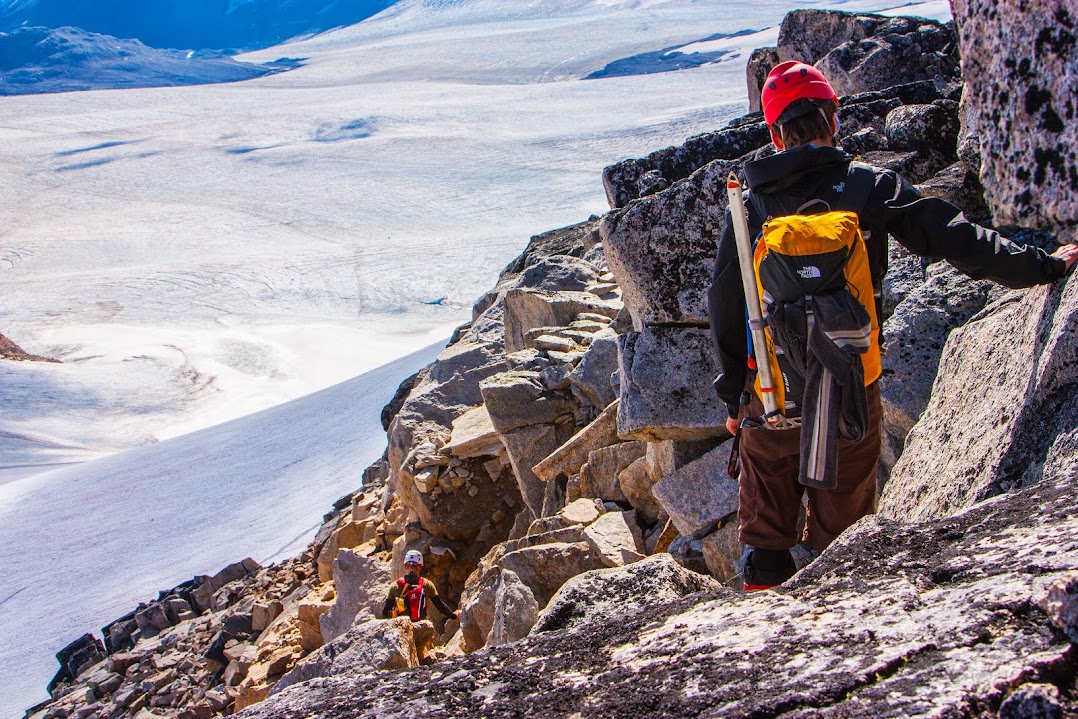 Time for some crampons and ropes as we prepare to cross the Madhorse Glacier.

After crossing the first glacier and ascending the ridge to Madhorse Peak, we cross a bit more glacier before getting to the rocky ridge between the two mountains. This section was heavily glaciated with crevasses running both parallel and perpendicular to the direction of travel. After reaching the rock we charged the 400 m up to the summit. It was approaching 4pm at this time and we were beginning to get concerned about our descent time and the possibility of still being on glaciated terrain, hours from as darkness approached.

Looking West from the summit 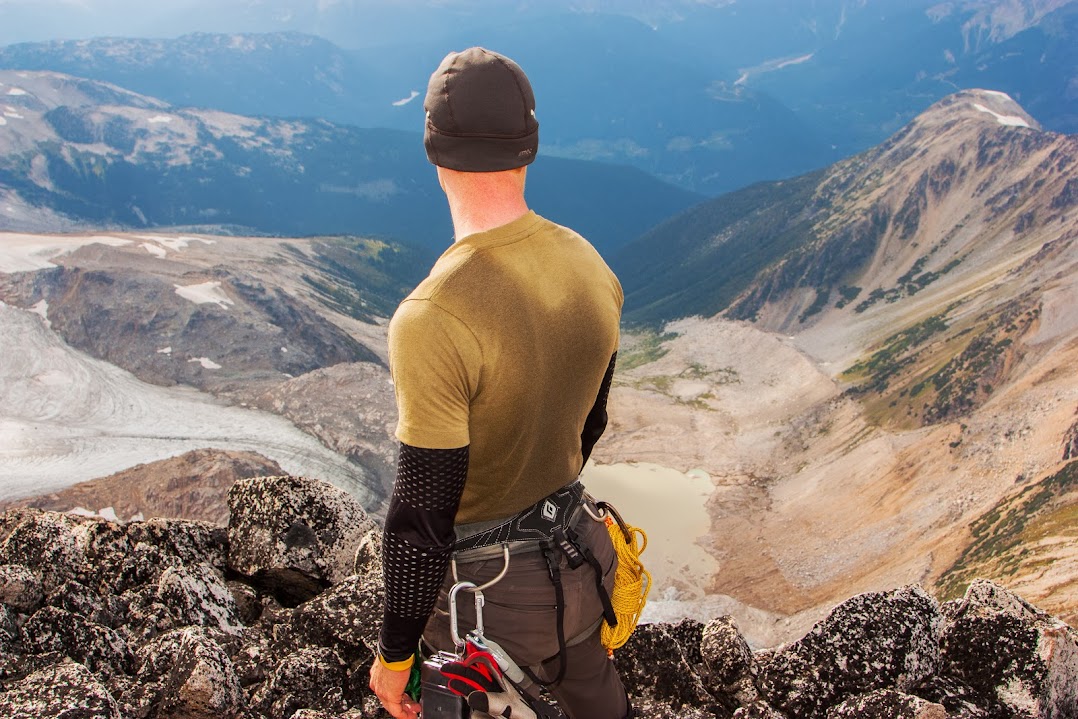 After a bit of looking around, we were not feeling overly confident about the descent route on the North East side of the mountain. Overall it looked fairly steep and glaciated, which was a bit out of our comfort zone without any running protection. We ended up downclimbing just a little bit further West than our ascent route, down a choss filled gully on a South aspect.

On the way back down a little west of our ascent route. The glaciated terrain and rock ridge are visible below us. 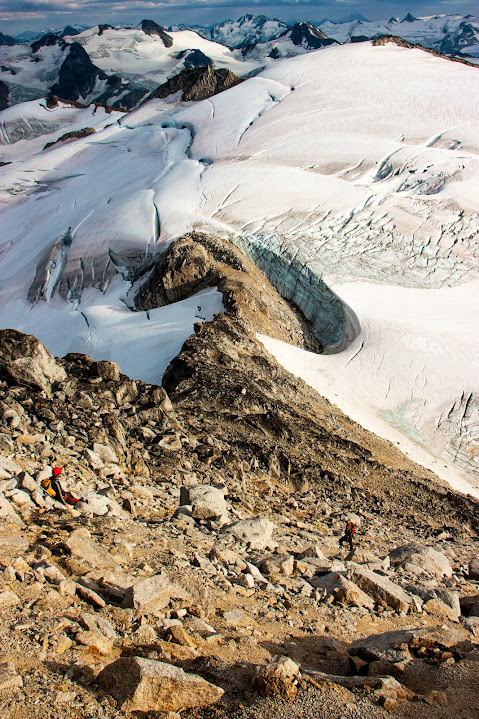 After getting out of the gully, we contoured around the boulder field s around the base of Mt. Overseer. This area was fairly unstable with plenty of fridge 1m across rocks moving and the occasional fridge size rock letting go in some areas.

When we finally reached a small glacial lake which fed Barr Creek directly south of Uriah’s heap, we thought we were pretty much home free, but found nowhere to cross the lake or creek. At this point it was twilight and full immersion to cross the lake or risking being swept downstream in the fast moving river below the lake seemed risky as we were contemplating spending a night out. In the end we opted to follow the creek downstream in the hopes of finding a log crossing, and with a worst case scenario plan of intersecting with the Barr Creek crossing we used the day before about 2 km downstream. Luck didn’t really shine on us, and about 2 hours later we found ourselves at the log crossing.

We cached some gear after the creek crossing and powered back to the hut, total time was a bit shy of 17 hours.

We decided to make dinner as we’d been moving for most of the day on about 5 cliff bars each. We crashed pretty hard and got a late start the following morning. Conveniently for us, the VOCers who were also staying at the hut had assembled the bridge so we managed to avoid a 3rd au-cheval style log crossing. A few hours of head down slogging later we were back on the road and heading to Whistler for a burger at Splitz.

Route for Day 2 prepared by Ryan S. The obvious disclaimers apply to this  that it should be attempted at your own risk and conditions may be different than when we completed our own trip