(The three explorers Roland, Nishant and I set off to obtain helicopter nets and then set off to Brew Hut. Our goal on this trip was to helicopter 3 metric tons of firewood up to Brew Hut. We were on the receiving end up at the hut, along with Marius and Adriana who would hike up after us. Group B for Bouncy and Beautiful were on the loading front at the bottom of the logging road loading firewood into helicopter nets. Stephanie had made mention of fire, Bruce Wilis, and madness on this trip, so naturally adrenaline levels were high. After getting up to the hut, two of us partake in nighttime meditation.) 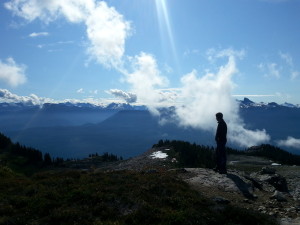 Serenity comes in the form of the glittering night sky. I join Nishant outside the hut as we marvel at the stars. The sight was wonderful. Gazing over my shoulder, Brew Hut was set against the splendour of the stars. The wonderful sights only in the outdoors are plentiful, and the night sky must be one of its most splendid. Nishant points out to me the Big Dipper and stardust. We wonder at how the ancients must have done exactly what we did, looking up at the night sky, admiring it, contemplating, luxuriating in its mystic quality. I grew up as a city girl and urbanity does not bring with it opportunities to enjoy starlight. For the first time I saw stardust. Starry, jewelled, glittery – descriptions conjure only half of the emotion brought upon by gazing up at the sky.

Cheese-rolling commenced in the morning. Our arms would soon be used up by the exertion of rolling three metric tons of firewood into piles by the hut, but that is getting ahead of myself. The helicopter rose from the valley as summoned, the first load of firewood rounds suspended in its net. I was simultaneously transported into both the James Bond and Hunger Games series. Brace yourselves! roared the windstorm brought on by ferocious helicopter rotors. And so we did, protective eyewear gracing our faces, feet planted firmly, faces looking up at the mighty machine. I hung on to my hat. Nothing would shake our resolve to roll the firewood round into neat piles. 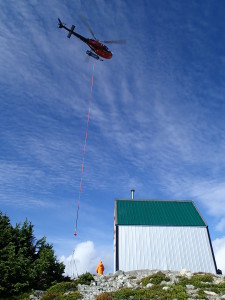 Except maybe casualties. Decades of traversing the backcountry had left Roland unscathed, but the helicopter came close to blemishing his record. As one of many loads of wood was lowered to the ground, misfortune almost struck. The aerial boulder-like mass of firewood swung at Roland, a gigantic battering ram on a pendulum threatening to pin him against the hut. O tragedy! But wait! With a wealth of experience of traversing the backcountry, Roland will let no mere helicopter trouble him. With the agility of the nimblest-footed mountain goat Roland leaps to safety, his neon orange jacket a dash of colour. The pilot swerves and the firewood hammers the hut instead.

After the excitement, we examine the hut. Relatively trivial dents, given the alternative. Marius later takes a hammer to the hut wall and turns the lip of the metal siding back towards the hut. The hut is almost as good as new and hopefully still keeps the precipitation out. 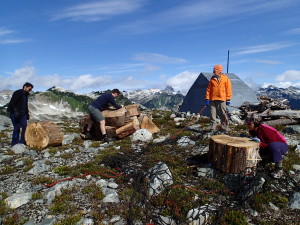 rength as we stack the wood neatly into piles. As I pushed against a firewood round willing it to move – apparently firewood is not responsive to mental urging – I indulged my inner kid as I considered how heavy a forest must be. If barely a section of a tree is that heavy, it must take a lot to lift an entire forest? How would I lift a forest? How could I lift the Earth? I imagined an Archimedes-style lever with the Earth on one end of it and a grinning Archimedes on the other.

After imagining lifting forests we decided to bushwhack through them. Sandra and Paul arrive by helicopter (!) just as we leave to summit Mt. Brew. Marius bravely led the way as we all pushed out way through brush and got on the summit. My list of firsts has grown almost as quickly as Marius and Adriana hike trails. See a helicopter in action: check. Play small part in improving the backcountry: check. Bushwhack: check! 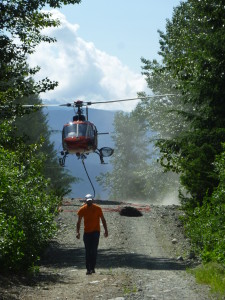 (Clemens looking badass. Refer to this video. Photo courtesy of Lia Dengler. I wasn’t actually in this group that loaded the wood into nets, but I couldn’t resist posting the photo. )

The bugs on the way down were bad. I heard after the trip that MEC has mosquito shirts for $12 dollars. The group were superstars – we waited to regroup even when the bugs were on a feeding frenzy. Bugs are a horror. They were the worst thing on the trip. Nietzsche claims I am made stronger as they didn’t kill me. Maybe being stronger means that I can bring death to bugs just by my presence. That would be nice.

Marius and Adriana headed off to Sky Pilot. Roland, Nishant and I head back to the city, stopping for requisite ice cream along the way. Roland showed me his sci-fi style yogurt machine (complete with circulation pump, thermometer, and heat regulator). And so we return to our regular lives, luxuriating in the afterglow of a wonderful trip replete with natural beauty, camaraderie, and Super Extreme Helicopter Action with Fire. 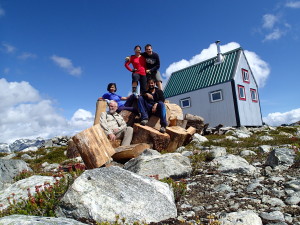