Brew Hut debacle lives up to its name

The day started bright and early, with my pack readied the night before and my lovingly prepared sandwiches, avy gear, and flask of rum ready by the door. This being my first VOC trip other than Longhike (which according to reputable sources “doesn’t count”), I felt the pressure to not contribute to any faff.

The notion of an incident-free getaway was quickly dispelled by the time I reached Sam’s house exactly on time, only to receive a panicked call from fellow driver and faffer extraordinaire Erin, who informed me that she had lost the keys to her Thule somewhere in the ill-remembered haze of the previous twelve hours. And so it was. Rides were shuffled, logistics sorted, and finally I felt the hit of my longed-after double double as we pulled into Squamish. 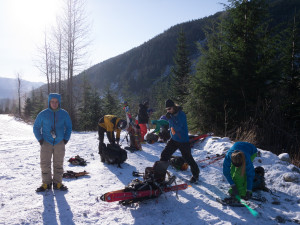 Arriving at the trailhead after making the mistake of following Erin’s car and speeding past the turnoff (by this point she had resigned to referring to herself as “Queen of Faff”), we proceeded to engage in a lengthy debate as to the merits of skiing vs. snowshoeing in what looked to be a meagre early season snowpack. Feeling rather silly, I constructed my best A-frame and shouldered my pack, trudging up the barely snow-covered logging road in heavy alpine boots. Erin opted for snowshoes, the only choice available given the rather ironic situation of having her skis locked in the Thule. So close and yet so far… 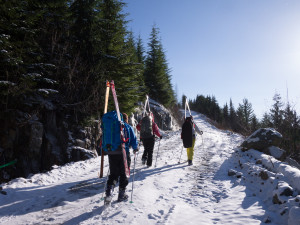 Some hours later, nearing Brew Lake, the skier’s efforts were rewarded with more snow and skinnable terrain. A beautiful high-pressure system meant there was not a cloud in the sky when we finally reached the safety and warmth of Brew Hut, just in time for a quick polka courtesy of Brody’s questionable but appreciated judgement in packing in a full-size accordion. 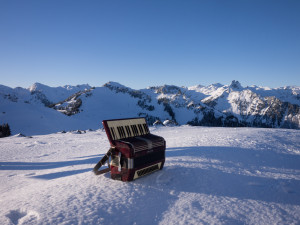 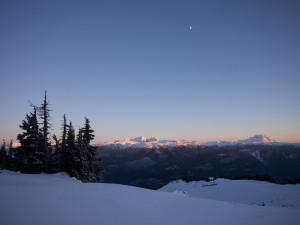 As the day wore on, a summit party formed with the intent of reaching nearby Mt. Brew exactly in time for what promised to be an epic sunset. The colours faded through to a stunning purple and orange alpenglow as we reached the peak. Celebratory high-fives all round! The mood of the party became increasingly elated as we each attempted to capture the light of the sunset filtered through the bottle of whisky inevitably brought along for this moment. 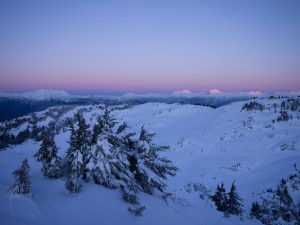 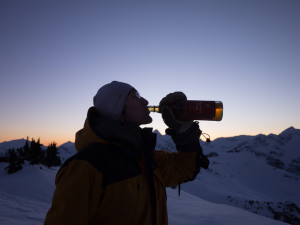 The rest of the evening was passed in drink and song, and finally we settled into bed, tired, happy and a little drunk. Unbeknownst to the party, disaster was about to strike, but not in the expected form of avalanche or injury. As Sam, Brody and myself (hereafter considering ourselves brother-in-arms) drifted off to sleep, we were suddenly and violently awoken by a spray of mysterious and foul-smelling liquid. Brody, who had made the unfortunate choice of sleeping with his head where Sam and I had our feet, quickly deduced the source of the disturbance. One of our fellow revellers, who shall remain unnamed, had imbibed past the point recommended by the alpine responsibility code; unable to reach the exit, he had proceeded to vomit upon the closest available surface, which was the three of us and our gear. 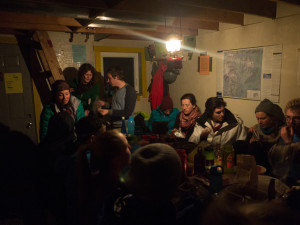 After a period of disbelief, the inhabitants of the hut sprang into action (with the exception of those who “couldn’t even right now”), and before too long the loft was cleaned as best as could be managed. Our slumber continued, punctuated now and then by the sounds of a distressed stomach emanating up from the ground floor, where our friend had been quarantined. The next day dawned bright and clear, and we geared up for the ski down. Several first-time tele skiers were among the group, and spirits were high but progress slow through the wind crust below the hut. Not blessed with patience for faffing about, and with alpine gear to speed my descent, I quickly abandoned the group to revel in my first backcountry turns of the season. 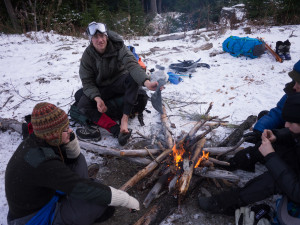 Arriving back at the trailhead, and knowing that a long wait for the rest of the party was likely, I happened upon the advance advance group (who knew snowshoers could beat skiers down?). As the chill of the afternoon settled in, we started a fire, sharing the remnants of our lunches and tales of adventures past. Finally the tired but satisfied skiers emerged, gear and people were shuttled about, and we were on our way, ready to feel the hit of a double double and the warmth of a cozy bed. A fine weekend was had by all, and the memories of the previous night’s incident only served to justify the name of this annual expedition: the Brew Hut Debacle. 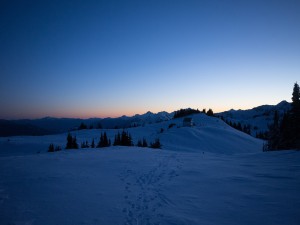 4 Responses to Brew Hut debacle lives up to its name