Something in the Water

*Refreshes forecast* yup… it’s still going to rain. What do we do when we can’t climb? We go drink in hot springs! With another successful Rock Party behind us it was time to honour the age-old VOC tradition of seeking out some hot water to get naked in. Ostensibly billed as some kind of “recovery trip” from the previous weekend’s climbing and shenanigans, we all knew what we were getting ourselves into. Party hats acquired, we all settled in and prepared for a 10AM bridge crossing time, surely one of the most relaxed timelines in VOC history.

Despite the carefree nature of the trip, Kevin and I did have some trip-leading trepidations. Our plans to visit Meager had been foiled in spectacular fashion a couple weeks earlier, when a trip into Harrison Hut had left several cars stranded by washouts. With more rain in the forecast we weighed our options. Considering the wisdom of crossing the Lillooet by canoe to be questionable at best, we had settled on Keyhole. Now, as my ever-faithful Blue Steel sped down the Pemberton Meadows road, I heard the news from Kevin: “yeah the road looks super duper sketchy, we are definitely bailing on this one… how about Tenquille?”

I consulted briefly with my lovely passengers Mikayla, Lianne and Mirko: there was absolutely no way in hell we were consenting to any activity that involved that much effort, not when hot water and nudity was still an option. A brief group meeting back in Pemberton over second breakfast confirmed this inclination. So, after much discussion of just how far and how crowded other options might be, we settled on Skookumchuck and all was well, we were almost away…

“Wait, has anyone seen Chrisel’s car?” Oh, no. Only a couple hours into the trip and we had already managed to lose an entire car’s worth of people. We called and texted to no avail, and realized that they had already lost cell service and were no doubt halfway up the road that looked in imminent danger of washing out. We were concerned for our friends, but there was not much to be done, and the party must go on.

After an hour of giving hell to Blue Steel’s suspension, we arrived at the campsite, where we were informed that “Sloquet is busy, and we’re having a pig roast”. Okay, we’re sold. We fashioned a tent city in the pouring rain, and did our best to cover some picnic tables with a patchwork assembly of tiny silnylon tarps, the irony of car camping with ultralight backcountry gear not lost on us as we lusted after our neighbours’ giant canvas fortress-shelter, complete with party lighting. No matter, there was hot water and plenty of beverages to go around.

Skookumchuck is one of those love-it-or-hate-it places, and it’s certainly a far cry from the rock pools at Sloquet or Keyhole, but I’ve always found the motley collection of cedar tubs, old Jacuzzis and repurposed septic tanks to be kind of endearing. In any case, there was ample room for twenty-something drunk twenty-somethings to strip down and pile in. Naturally the full events of the evening should not be described here or anywhere, but they did include a poolside guitar serenade in a thunderstorm, rather a lot of whiskey and a visit to the strangest of parties.

Those of us who made it to the pig roast will never un-see what they witnessed that night. As we walked into the Lewis Carrol madhouse of lanterns, chandeliers and formalwear, we were greeted by a man in a dress shirt ravenously tearing the flesh off a pig and dumping it into a bucket. He explained to us that he was in rather a hurry to complete this task, as the amount of hallucinogens that he had taken was making the experience a little bit on the intense side. We accepted his offer to consume a hunk of pig. It was pretty good. Two girls who had earlier in the night seemed entirely sane suddenly appeared with wild eyes and a machete. They told us, in no uncertain terms, that it was time to “EAT THE BRAINNNNNN!!!!”

And so it was. I watched in disbelief as this frenzied young lady hacked the pig’s head into a pulp, scooped out a piece of brain, and fed it to her friend, who immediately started retching. “Ahh, it’s like pork but, three times as much!!” Undeterred, the first girl grabbed a plastic fork and started doling out brains. By this time what was left of the pig’s head was on a stake in the fire, and, in keeping with the Goldingesque theme, chants of “ONE OF US, ONE OF US!” had begun.

Most of us escaped… but poor Mirko was not so lucky, and succumbed to being force-fed pig brain by this exceedingly well-dressed and psychedelic mob. Truly we had wandered into the darkest timeline. We high-tailed it back to the hot springs to recover from our ordeal, and watched the stars together until the whiskey was gone and our eyes were heavy.

So there you have it, our mischief was managed, and we left the next morning feeling connected in the way that only uh, getting very drunk in hot water and wandering into a cult ritual can. But, you’re asking, what about our poor lost companions? Yes, this already overlong tale has an epilogue; it turns out that our missing car had in fact gotten themselves into a spot of trouble as we’d feared. But I will leave that tale to Chrisel:

“The service road didn’t seem as sketchy when we got there. We reached the hot springs with a few other hikers but didn’t take a dip in ‘em.

The rain showed no signs of abating & there was a mudslide near the raging Lillooet river, so we took that as our cue to get the heck outta there haha. The service/access road was washed out near a bridge only about 10 km from Pemberton Meadows Rd .. we were that close to getting back out. Some 4x4s made it, but my Jetta was pretty susceptible to getting stuck so we headed back.

We were mostly good for food cause I had carried enough as well. The only issue we foresaw was our tent situation cause Angela and Kenta didn’t have tents. I could have taken an extra in mine, but our plan was to have one person sleep in the car. All that got solved after we got accommodation at a work-camp owned by the firm constructing the upper Lillooet hydro project.

It was pretty legit: hot showers, fresh towels, good food, and each temp-regulated room had a tv :)” 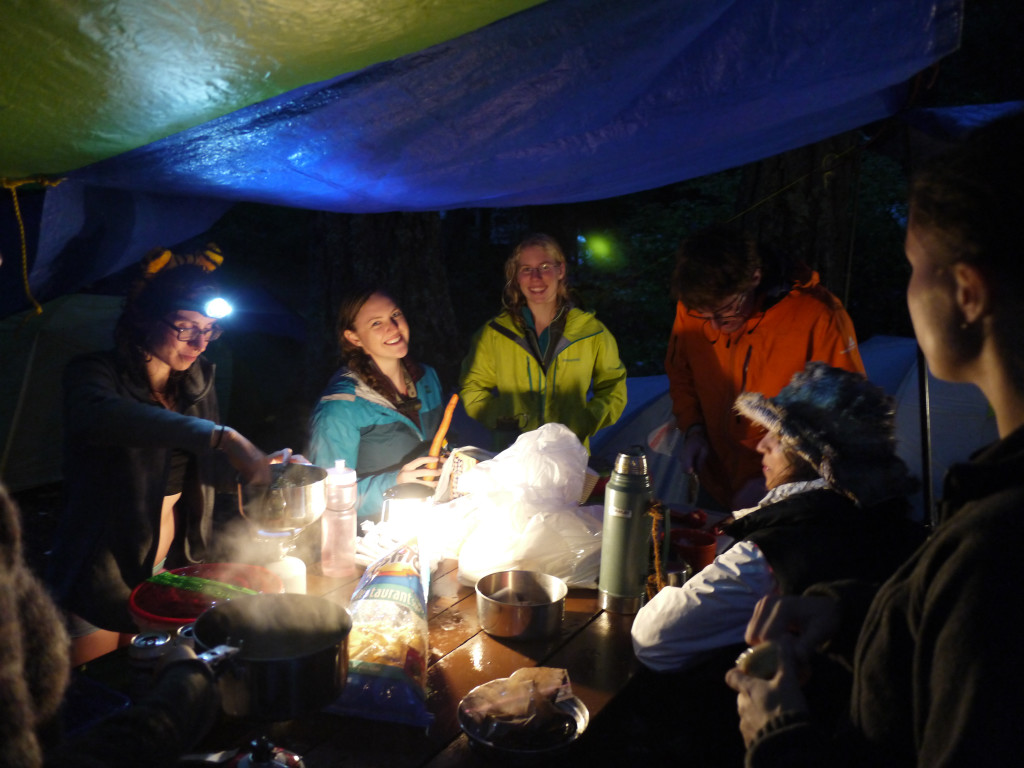 The Thanksgiving potluck in full swing 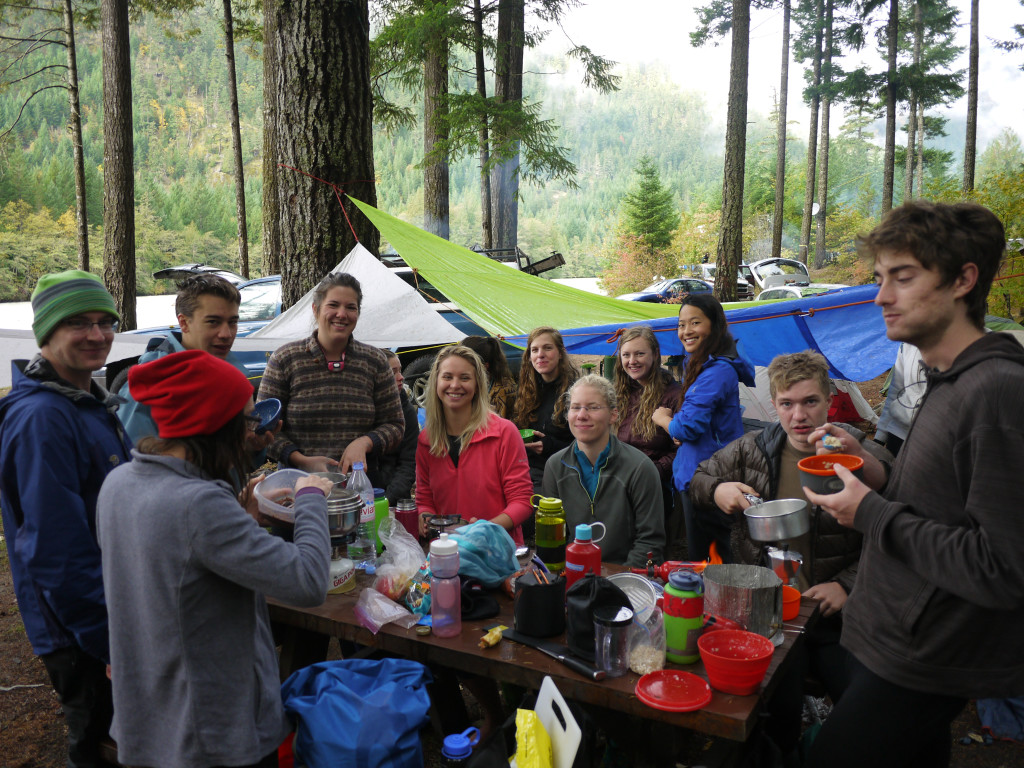 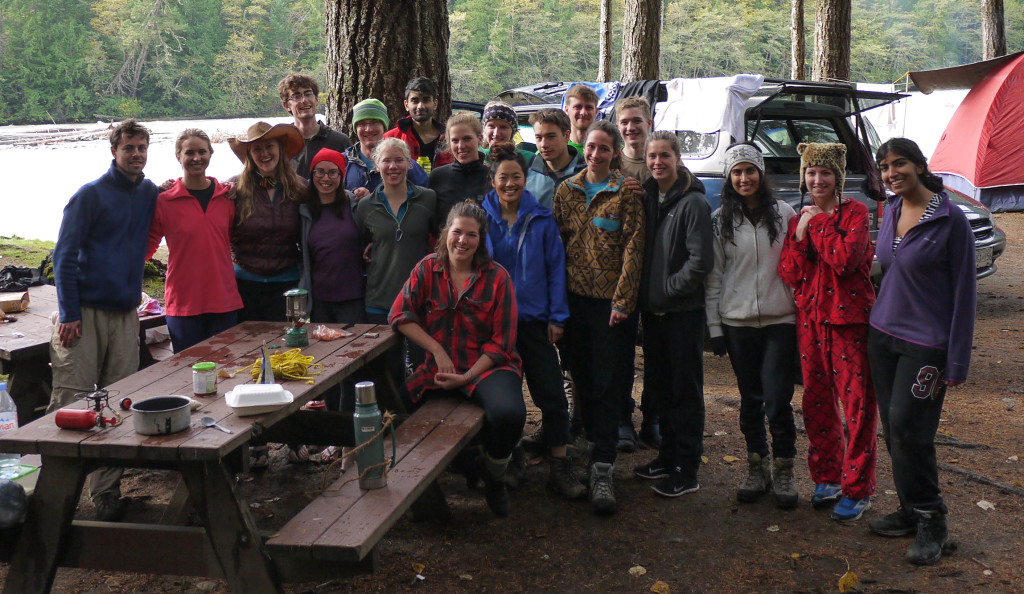 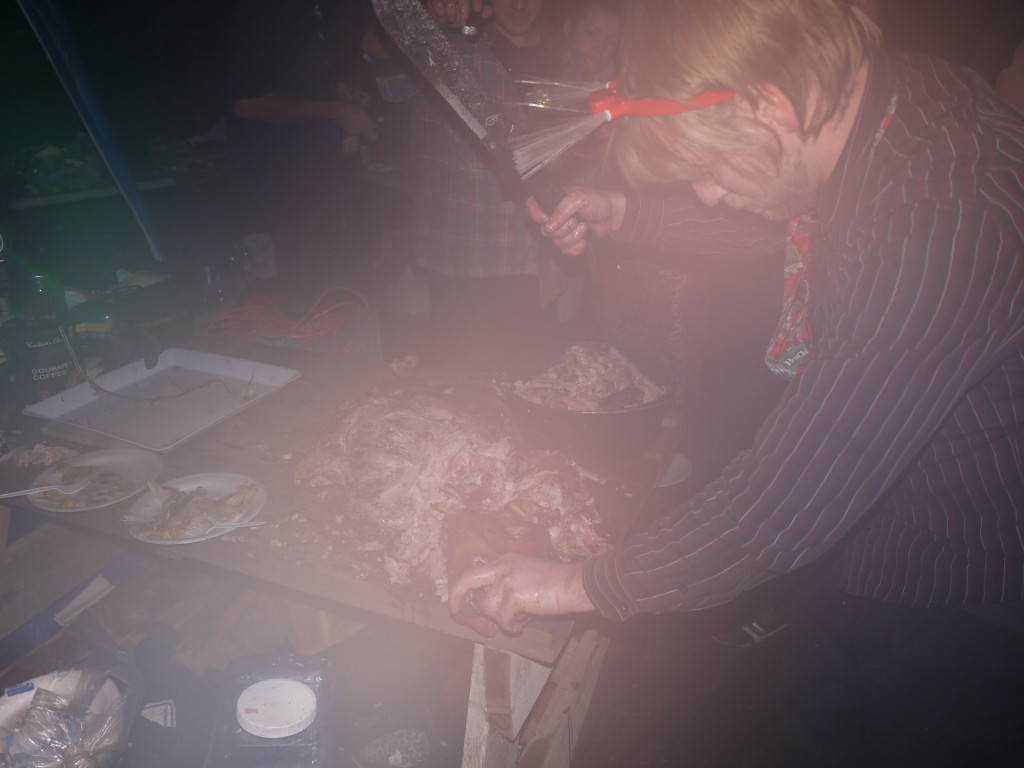 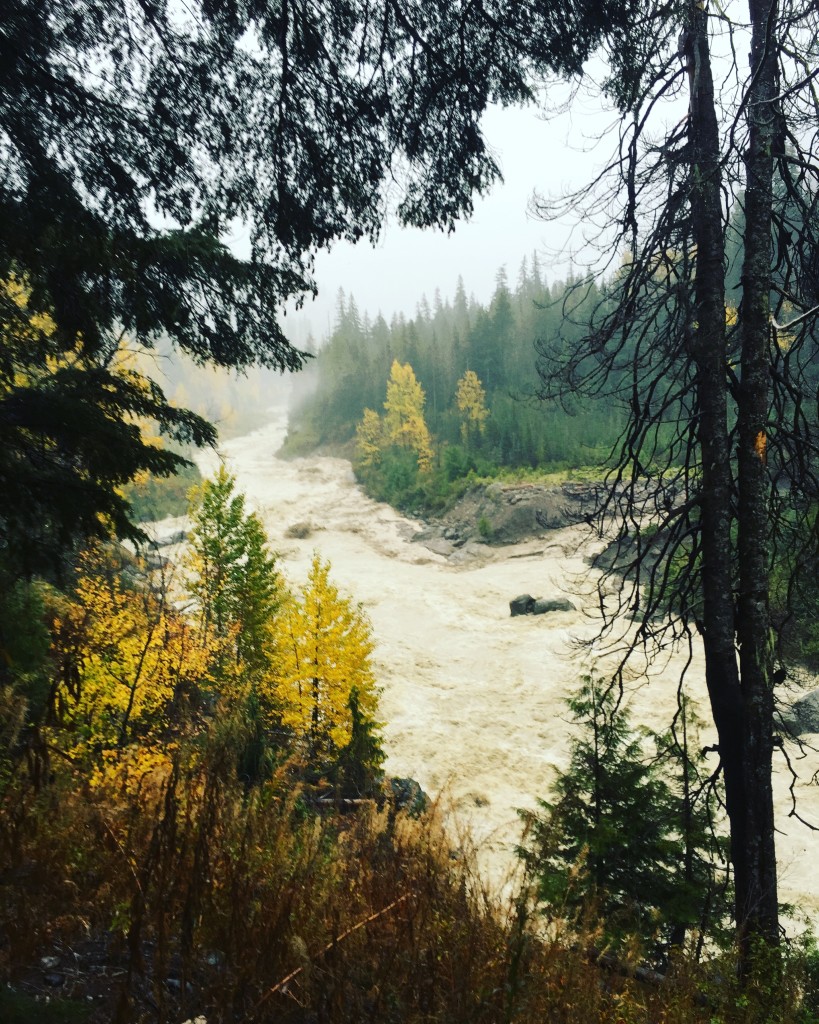 The raging Lillooet, which would later trap Chrisel and co. 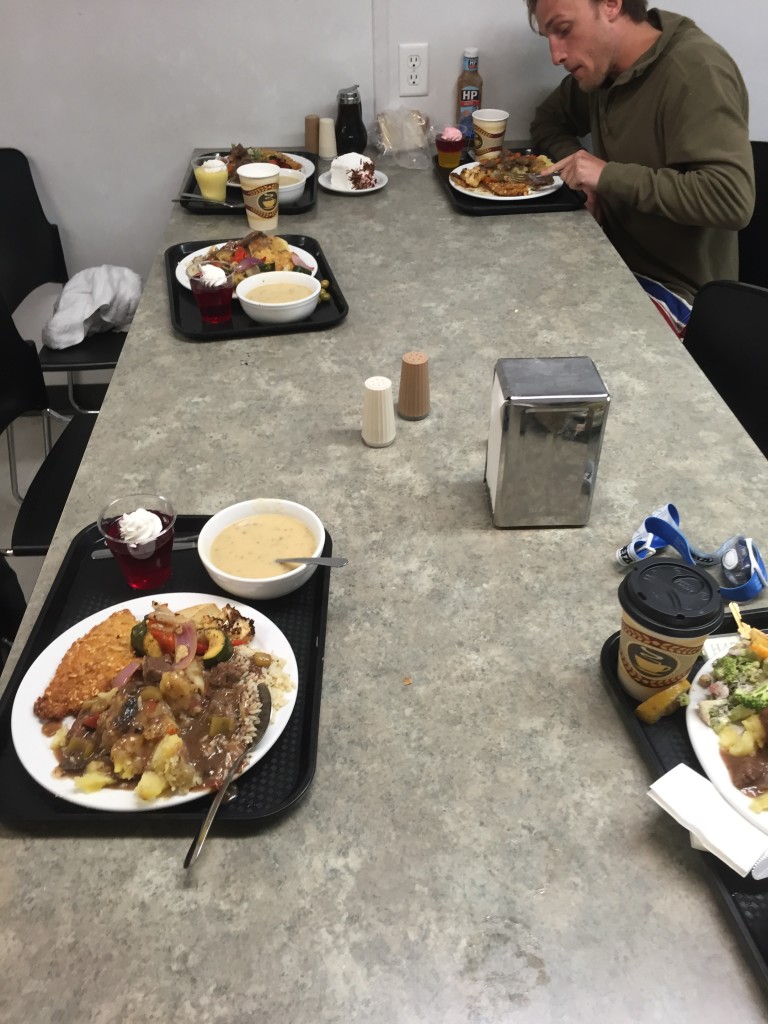 At least they got some tasty food out of it

2 Responses to Something in the Water