Preamble: Normally, I don’t write trip reports aside from an occasional drawing in a sketchbook; But maybe that’s a bad thing and maybe it’s feeding into the beginner friendly crisis. So here is one.

Sometimes I get restless, usually when it’s been pouring rain for weeks down low, and work is a blur of that warm, completely drenched feeling and the ominous knowledge that the snow won’t freeze overnight. So I decided it’s a good time to go to Phelix – there was a Saturday shift that would not suffer from my absence, and probably, probably I could tempt some people with all the powder that was very likely to be there. Which I did. In a turn for the impossible, one of my supervisors got a 4 day weekend; and after calling nearly everyone in our department to swap shifts I managed to get another friend the days off. And then a member of the EI Ski Team could come too! People – check, Car – check, Excitement – check. 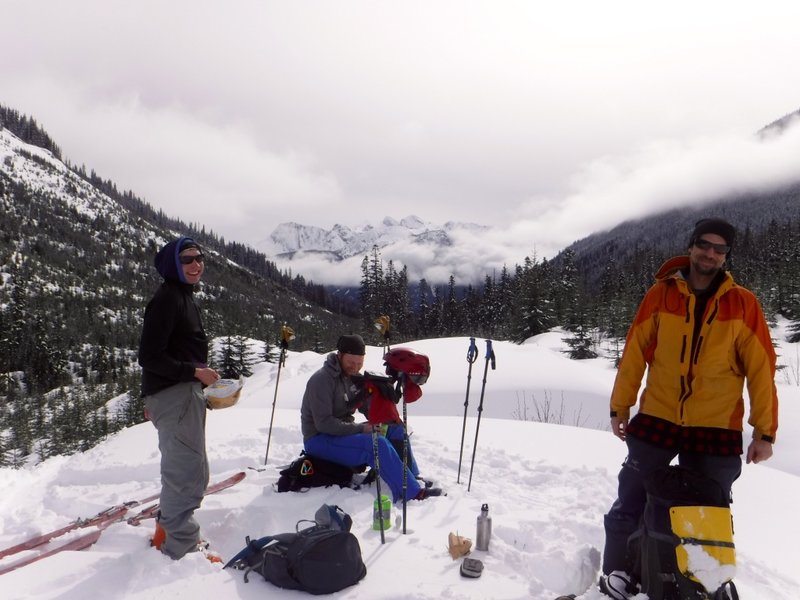 Lunch in the clearcut

The skin in was uneventful and serene. We skinned pretty leisurely, ate lunch in the clear cut, watched some avalanches across the valley and got to the hut with lots of daylight. I love going to Phelix for its snow covered beard moss, giant old growth, pillowy boulders, and huge tree wells that make your skinning anything but mindless. I got asked about the weather and foolishly sounded confident in explaining it would start storming at 3pm during which time we wanted to have gotten to the hut because it would storm for a long while. Hence began the mock TV anchor show “StormWatch 2016” where I got teased endlessly for being a weather nerd. In the end you could say we saw the first snowflake at 14:36 (of which I’m fairly proud, yet the 24minutes were still grounds for teasing for a while). It snowed and stormed on us for almost the rest of the time we were there. Garret, Mike and Nick went for a ski while I felt lazy and went on multiple water trips. No, let me back-track. I felt hungry as well and seriously motivated to do everything in my power to make this pasta happen for dinner. Mike had been talking about this pasta he was going to make since Tuesday night at work, so, it being Friday I had had plenty of time to dream about it, until the point where it was not just “dinner”, or “pasta”. It was the glorious thing I was most looking forward to upon getting to the hut. As a result of my daydreaming amplifying on the skin up, I had some intense motivation to go fish a chasm in a snow storm, refill everyone’s water bottles, and bring enough for the pasta. Despite my efforts the pasta still took over an hour to make during which Garret said my eyes followed Nick’s pizza wherever it went.

That evening, we found Fred – the fully functioning, living caterpillar, surviving through the storm (somehow). What he was eating and how he was surviving at negative temperatures we have no clue, but he was there. Now, before you take this as commonplace, you have to be able to picture Phelix. The lake is completely frozen, free water is pretty hard to come by and involves serious fishing down 4m through scarce melt holes. There is not a leaf or bud on anything deciduous. The view from the first floor of the hut is snow, and the needles on all the conifers are frozen with rime and melt freeze, then covered in snow. Maybe Fred was able to eat these, after he used his diamond hard teeth to get through the snow and ice? Anyway. We put him inside because not doing so would have felt evil. He may yet be alive, if he survived the slightly painful to endure guitar and ukulele playing and singing of Garret and myself later that night. 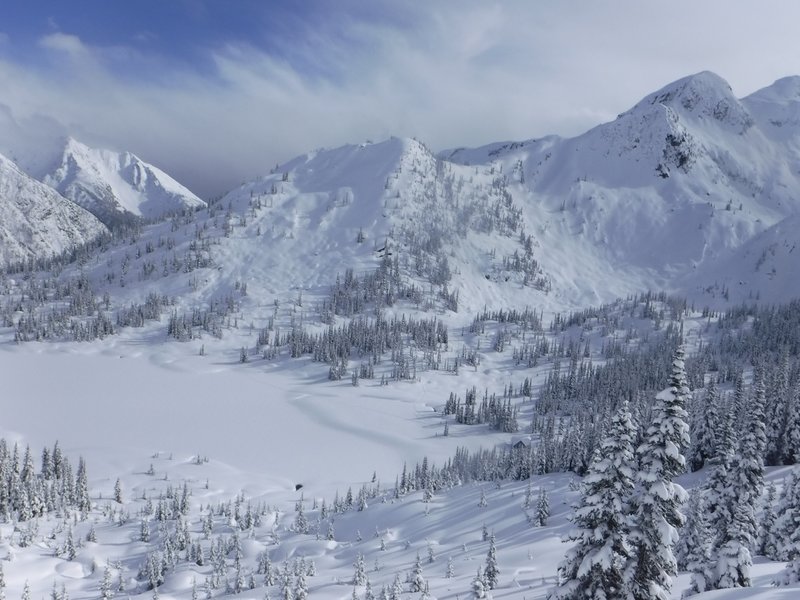 Window of sunshine in the midst of the storm

The next day we woke up to tons of new snow and skied cabin hill a bunch until even I felt confident that I would not die skiing away from the safety of tight trees and mellow angles. At that point, it got so foggy and opaque I proved to myself I would still be able to ski should I become blind. Nevertheless, the feeling of effortless flying through the mountains with snow shooting over your shoulders, grazing trees with your fingertips, and having friends to smile about it with is purely as amazing as it is addictive. If I had to invent a drug for depression, I would find a way to take that feeling and encapsulate it in a pill. We went inside out of the wind and ate the densest sandwiches Garret and Mike have encountered. I essentially put all the types of fat I had in my fridge on Thursday night at midnight inside them. Nick, Breanne and Geoff went to go ski some more right after lunch. In another act of softness, I opted to go shovel out the outhouse (which was unopenable and unusable by anyone wider than myself, Nick or Breanne) and screw the lower hinge back on. This is a temporary fix because the holes have lost their thread and could really use bolts instead of the screws we put in to replace those that managed to escape. After this I reconfigured the tie string keeping the door closed so that you still have the loop to go over the nail if you want, but it’s also clove hitched shut. Meanwhile, Mike and Garret dried in a sunny break and watched an American kestrel (bird ID by Mike) eat a hut mouse that was barely any smaller than the kestrel itself.

We skied some more, something that has now easily replaced Cabin Hill for safe fun in my eyes; and then we skied down. It was amazing…sometimes to make up for still not having any money to buy a decent camera I engrain mental pictures in my head. This is one: the hue of grey the sky was as twilight fell, while we were skiing the logging road, with snow covered alder framing an arch over me, the aftertaste of chocolate chips and sunflower seeds in my mouth, the comfortable pain of my feet in ski boots for yet another day, the cool breeze on my cheeks as snowflakes melted on them, the quietness of creeks silenced by the new snow, and the look of happy tiredness on our faces.

When I got home, I felt like I had been away for months and had the intense sense of worry that I hadn’t watered my plants in ages and that they’d be dead. In reality, I had only spent 1 night away, but I think this feeling is an awesome way to judge how a trip went.