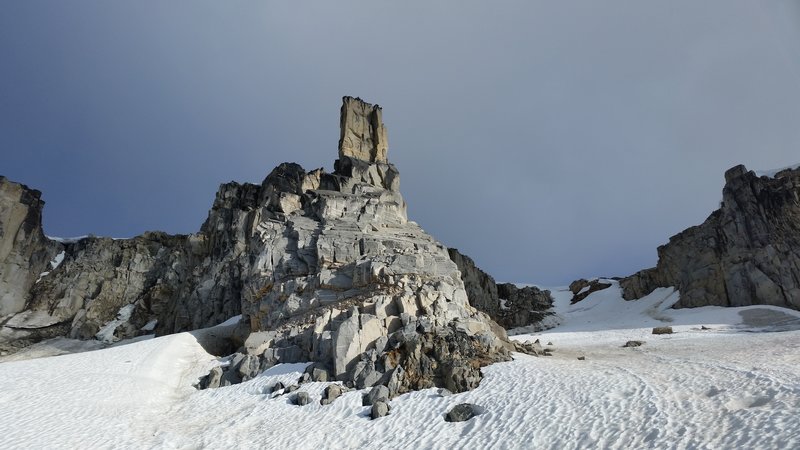 How it started: “Weekend plans?” – Nick

Some email faff, obsessive weather monitoring and a trip change later we were in downtown picking up Ben from work.  I was really excited. My memories of Harrison thus far only included rain, deluge, more rain, a helicopter and stories that most people thought I was making up. We parked at the usual spot, took the temporary trail (which is marked by four (4) large signs, and ample flagging that even says ‘TRAIL’ on it, in case one is somehow confused), and then rejoined the old trail. I promptly sank into a mud hole of which I really think there is thankfully no photographic evidence, and hiked to the end of the logging road where we bivied. It was an amazing sleep until it started to sort of rain. This was kind of expected albeit optimistically unhoped for and we ran (Nick), walked (Ben), and stumbled (Lea), in various states of awakeness to the trees just downhill where we slept in various configurations trying to lie on the closest we could get to flat ground. The moon was as bright as my headlamp. 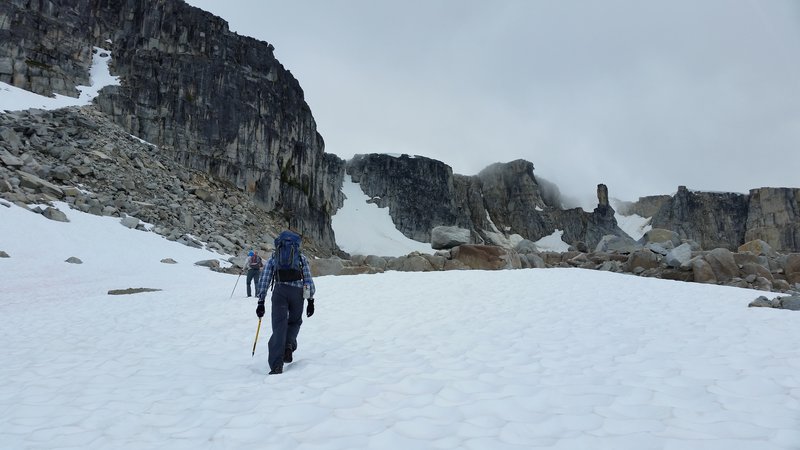 Nick and Ben with the Obelisk in the background

The next morning we got to the hut, admired the outhouse, had elevenses (at ten) and set off for the Obelisk. 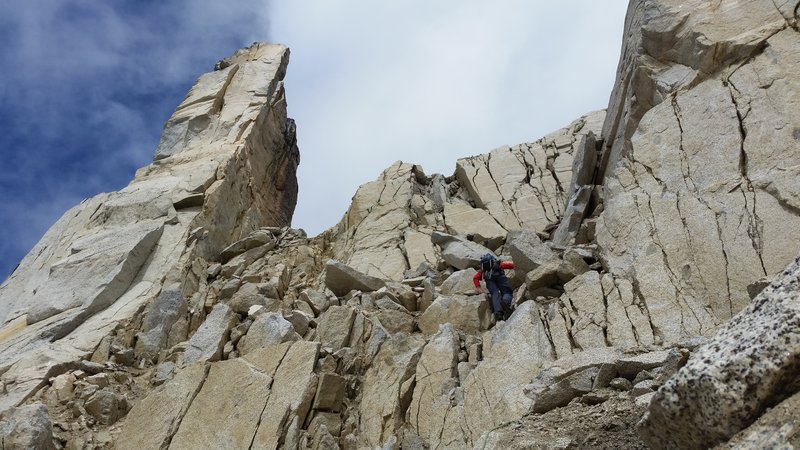 Ben on the first pitch, which we topped out to the right (just out of sight). 2nd pitch is the traverse from right, to left

The first pitch was decently terrifying. Nick didn’t seem fazed and lead it somehow finding good placements in an almost vertical choss wall. To me it already seemed ominous when Nick was a shade less than flying up it with ease. Ben and I spent most of our time hiding behind this rock that thankfully deflected all the toaster and shotput sized rocks coming down while Nick was leading (thank you Nick, thank you giant rock, thank you Nick again). Nick and Ben seemed fairly untroubled by the chossiness of all this so I just sort of assumed this must be what alpine climbing is like, and that I’d better just get used to it, but Nick made me feel better about the whole thing when he later said it’s the most heinous choss he’s ever had to deal with. Then Ben seconded it easily, and I cowered behind the rock alone. Then I seconded it. There’s something really nerve wracking about getting your hopes up thinking that that solid looking boulder ahead will be a good hand hold, testing it, and having it crush your dreams as it comes down, or comes apart, or wiggles or otherwise inspires fear. The rational part of me knew I just had to exert the minimal amount of force as equally distributed as possible across all my appendages in order to move up. I wished I had more appendages. Or less force to exert. I think that pitch is the closest I’ve ever come to crying on a trip – almost, in happiness every time I got to a piece of rock that didn’t give away, and almost, in terror every time it did.

I then lead the second pitch – later dubbed the choss-arête. It was a short downclimb, followed by a semi-graceful crabwalk across an arête with nice views of the various rock avalanches the amphitheater around us was sending down. I inwardly thanked Nick’s route-finding again, since it seemed like past VOCers had rappelled down some part of this crumbling amphitheater to get to the Obelisk instead of coming up the valley from below like we did. 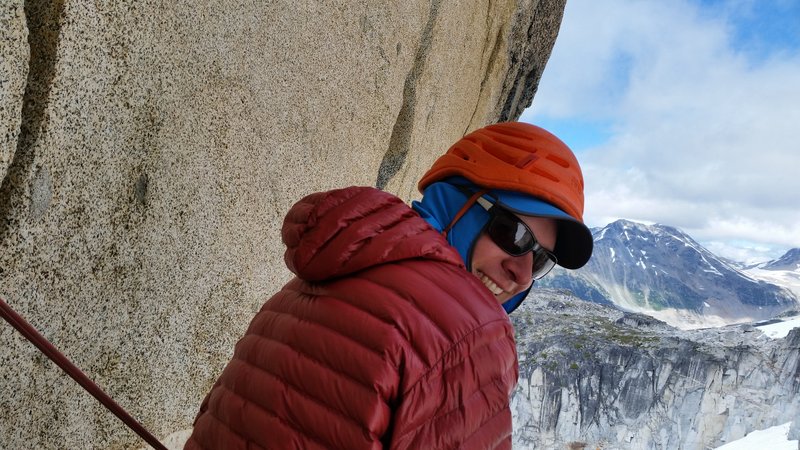 Nick and mountains at the top of the 3rd pitch

Nick then graciously lead the 3rd and 4th pitches to the top. They were pretty glorious cracks and totally deserve to be climbed more. At one point you could see right through the Obelisk! It was kinddd of amazing being at the top, to say the least, and being so happy to have made it totally overshadowed all the terror of the first 2 pitches. No falls were had, and the rappel down was nicely uneventful. We had an awesome dinner of 12pack-hot-dogs (Nick), salmon-cheese wrap #3 (Lea), and salty snacks (Ben). 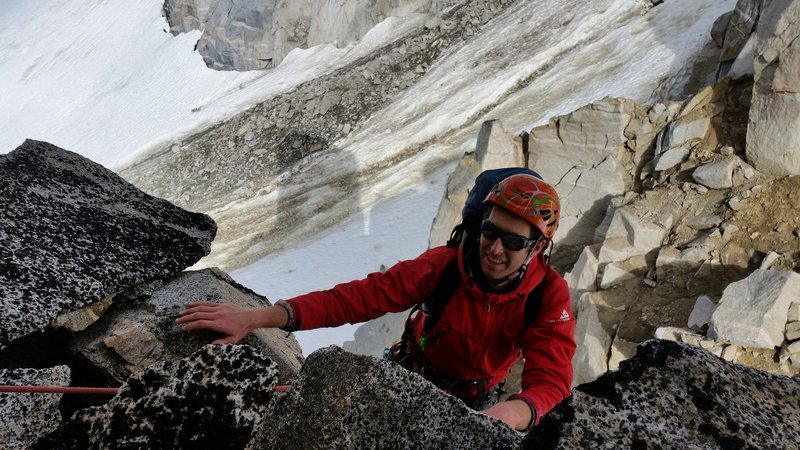 Ben topping out on the Obelisk!

The next day I took sunrise pictures, reveled in being able to see around the hut, and went back to bed while Nick and Ben scouted the route to Overseer. I think the guidebook was really ambitious in its time estimations but they had a fun morning hike either way. Then we hiked down leisurely, ate all the black huckleberries, blueberries, thimbleberries, raspberries, and salmon berries we could get, contemplated the advertised “HOT SEX” going towards the pools, washed (purposefully) in Pika cr. in an attempt to smell better, agreed signage for the Obelisk lookout would be a great mission, and looked at mountains. Right as we got to the highly promoted Temporary Bypass Trail, we saw Roland and co. below where the new parking lot is in the works. This was amazing and probably the greatest thing that could have happened at the time because the temporary bypass trail is as awful to walk as it is well signed, and Roland happened to be about to drive back to the trailhead. He even gave us a ride in the Jeep despite our aromatic presence questioning the legal seat limit. It was an awesome trip all around  : ) 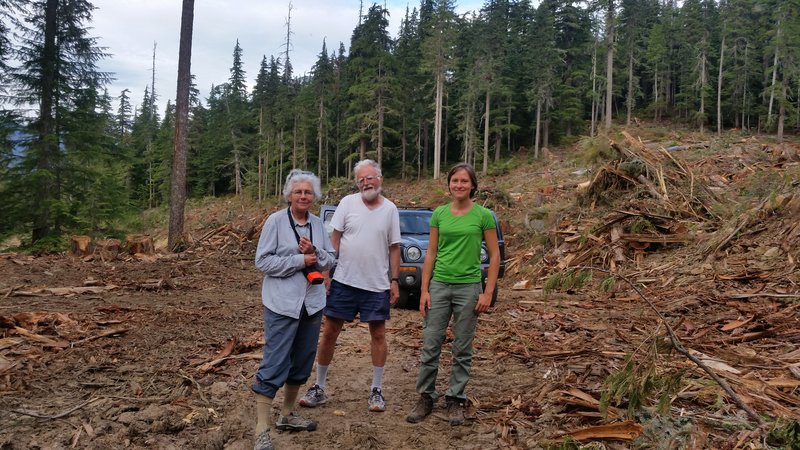 You can read about their trip  at