The preamble: Storm the Wall is this annual race where you normally make a team, and each person on your team does a part like the swimming, sprinting, biking, longer distance running and you all help each other get over the wall. The wall is this plywood vertical structure that’s 12’ tall. Unfortunately it only has steps on the back, no kind of holds, and you’re weirdly not allowed to go the reasonable way of laybacking up the side, or hacking up it with lumberjack spurs or knives or a pole-vault or anything. It’s decently iconic at UBC. Besides the team, you can ironwoman/man it. Or you can superironman/woman it where you respectively get no help at all, or you get the help of one person at the wall but only from the top. For most super ironwomen and ironmen, the way to get over that way is to run at the wall and dyno for your friend’s hand at the top. But it’s totally okay to be dyno-avoiding and go the static way of climbing up your awesome 6’4” buddy George instead – so that’s what I did.

The bit before the storming: I first asked UBC REC whether I was allowed to human boulder up George, and I got an ok with ominous warnings about how difficult it would be for both of us. If I was self-doubting before, I was positively half-bailing now… I really wanted to try it beforehand with a crash pad and no witnesses but after an evening of scoping out the wall, that didn’t happen. Something about a giant tarp over the thing at 9pm with typical coastal deluge, a police car pointed the wall’s way, a sketchy van crowded with guys moving random buckets right beside it, and partially, not wanting to get disqualified. Maybe all this was because decades ago some engineers made the wall a foot taller overnight and no one could get over it the next day? Anyway. Not having tried it at all, at the clinics I felt nervously trembly and I got even more nervous as George was hanging over the side and I couldn’t even reach his feet. The medic told me no one’s ever made it up that way so I felt even more self-conscious taking off my shoes under George at the edge of the wall. But there wasn’t a chance 5’1” of me could jump 12-minus-an-arm-length feet. However 5’1” me also couldn’t get George’s feet on tiptoes. Because being anxious does this to you, I had these visions of dislocating George’s shoulders since I was going to have to hop if I ever wanted to reach his ankles. Hanging there, George still convinced me it’d be okay if I totally shock loaded his legs with 110lbs. In the end I decided I’d feel worse if I left him hanging there and didn’t even try so I just jumped and made it my mission to get my weight off him as soon as possible.

Stop reading now if you don’t like it when people tell you how they did a boulder problem that you were just about to do, thus never giving you a chance to properly get frustrated about it. This is the climbing beta: 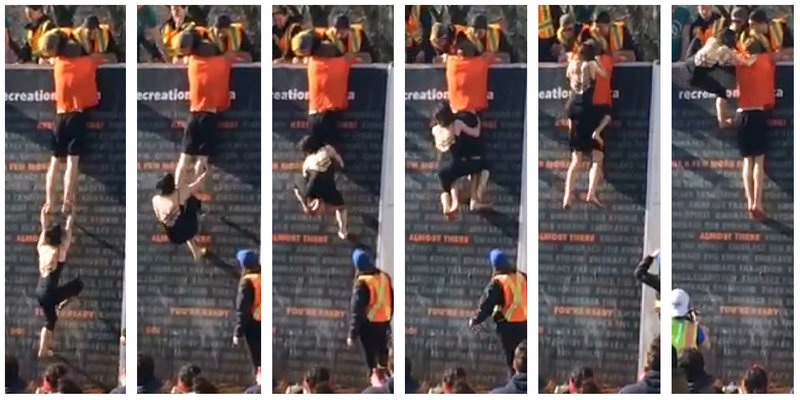 Video by Swantje Moehle; made into how-to stills by me.

Step 1: Find someone awesome like George. Grab their ankles, and smear up the wall a bit but beware of walking up the wall (UBC REC doesn’t like that). Awesome person like George: brace yourself.

Step 2: Match your right knee to your right hand by swinging your leg up so that your partner’s ankle is now in the crook of your leg. Bump your right hand to their knee. Awesome person like George: it really helps if you keep your feet in dorsiflexion.

Step 3: Match your left foot to your left hand. The next move is moving both your hands up to their hips (right first – because the knee around their ankle is a more secure hold than your other foot). Awesome person like George: ignore being tickled, and continue having amazing hips that double as great handholds.

Step 4: Change your right foot’s hold from knee-around-foot to foot-on-foot. The next move is reaching for their shoulders. Awesome person like George: Dorsiflexion to the max.

Step 5: Once you have their shoulders, shimmy up like they’re about to give you a piggyback ride. Awesome person like George: Hang in there.

The race – was pretty nerve wracking. I was really thankful not to be alone and that George was there because he’s solid like a rock. He totally thought I could pull this off the whole time and that really helped. He came with me to check in and was the best partner I could have asked for. By the time I got to the biking I was sorely regretting thinking I could do this without really running, or swimming beforehand. But he was there cheering the out-of-breath me, plopping the helmet on my head and excitedly telling me I was only 2 laps behind. Then I was on my mountain bike and for the first time I realized that I never pedal that thing fast – most of the time I actually try to be stopping so I don’t eat it off roots and rocks. I got lapped a bunch but it was pretty happy losing because George was still saying encouraging things like ‘Just one more!’. And then he was there with my open water bottle, taking my bike and still cheering. I high fived all the super ironwomen at the switchback as I ran behind them in the last stretch. I think I was second last at this point, going at my chill jogging pace. I made it to the wall and spent a bit trying to spot George in the shouting crowd and I half forgot to touch the wall. I walked and tapped it out of breath. After, I lumbered away thinking about how I could walk off the huffing until George got there. Yet as soon as I turned around, there he was hanging down. Crap so soon. But then we did it! It was kind of hard to think with all the shouting and keep track of what happened but at the bottom George said we won. Well, screamed it really, and so did I. There was a lot of pride and hugging and excited yelling going on. Followed by some trophy and t-shirt receiving, and by more excited hugging with the VOCers that came to watch.

It made me super happy that the girl who got second came to talk to us and said that next year she’s going to do what I did. Another girl also made it the same way after a few tips from me and with George helping as her partner too. I secretly really hope I started a revolution. Or at least inspired all the girls that don’t try it to think about trying it – genetically, you don’t have to be half grasshopper to make it! Most of it really is having an awesome teammate to help you along the way. 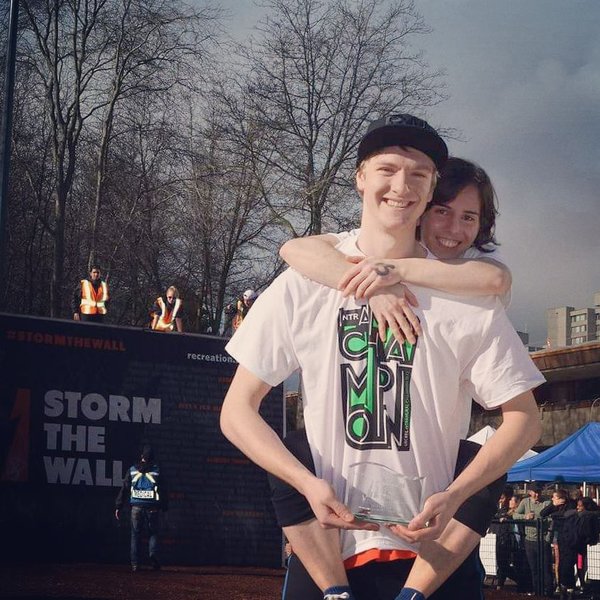 George and I after the race. Photo by my mom.