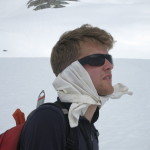 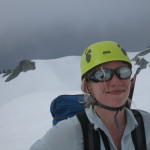 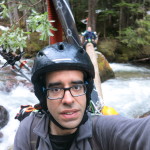 I remember the days when I used to hike in the Spanish Pyrinees in late spring seeing all those hardcore ski tourers carry their gear on a hot May day wondering why. Then in November 2015 I joined the VOC and soon thereafter started understanding what ski touring was all about. Despite what most people think, there is snow in Spain, and plenty of ski resorts.

Fast forward 1.5 years later, and I have been backcountry skiing a fair amount of weekends since October. Not all of these times have I actually managed to do any turns, but at least I wore the skis. Skiing in June, without ski lifts, would be a first for me.

When Vincent started the Mamquam-in-a-day email faff, I jumped at the opportunity and joined the trip. I hesitated initially because of my relative lack of fitness – not much skiing in May and not as much exercise during the week as I would have liked. But added bonuses of sleeping three in the back of Birgit’s car (I booked a spot in the middle, but somewhat got refused), being on a glacier,  first time June turns and excellent company were all difficult reasons to refuse.

Saturday 7PM and I am picked up and driven on the long Mamquam road until a barrier prevents us from going further. Highlights of the ride included seeing a black bear on the Sea to Sky, a chilled cold dinner and discussing route options. This would be my first alpine (ish) start, with alarms set for 4:40AM. It would be a long, but not too long, day to get up and down Mamquam Mtn.

Sleeping in the back of the car was not too bad, if a bit cramped. We spooned each other most of the time, except for when Birgit decided to sleep face up, then Vincent and I would spoon opposite sides of the car. It’s her car after all, so no complaints. Breakfast consisted of a good portion of cold oats, and some luke warm coffee. Birgit and Vincent had packed home-made crepes which was more appealing than my oats. I should learn for next time. Without much faff, we put skis+boots on the day packs and headed out. Despite being only a day trip, I had forgotten how heavy the skis/boot/skins/glacier gear combination is. 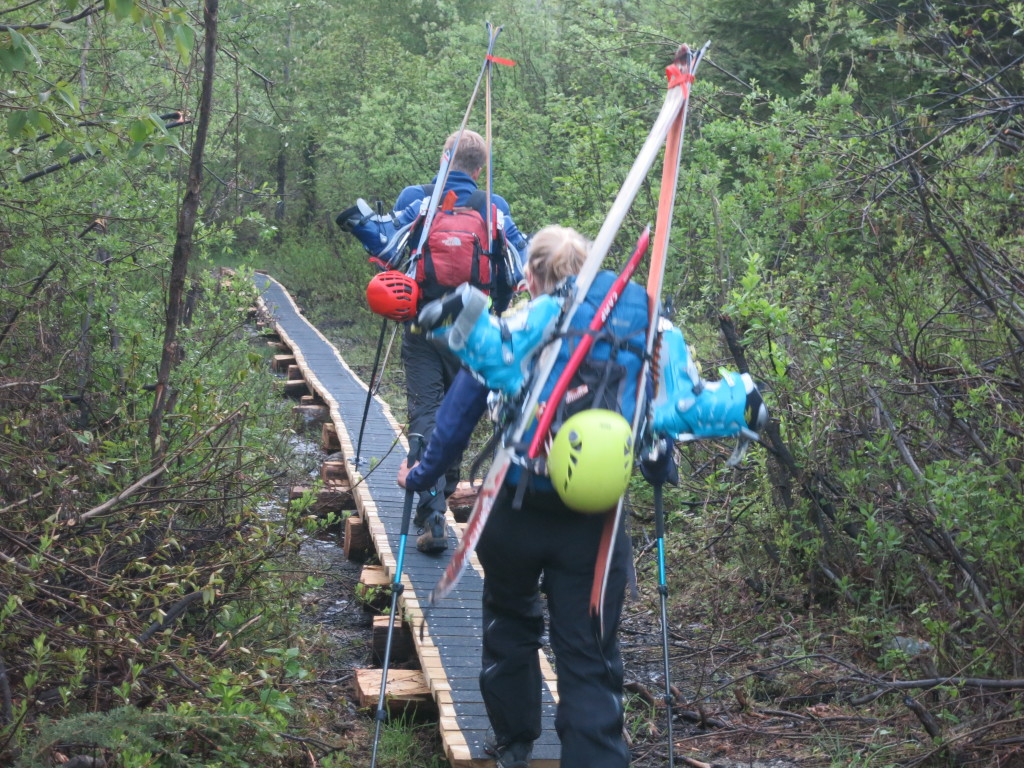 The first portion of the trail was rather lovely – the BCMC had been improving the access to their brand new Watersprite Lake hut, which the trail to Mamquam shares for a bit. But soon we turned left at the junction, and started the semi-bush hike through overgrown and wet alder. In under an hour we reached Paranoid Creek, located the fallen tree (apparently there was a bridge once upon a time) and started the steep climb through the forest. The log was rather cold, but not slippery, so wasn’t as sketchy as some reports had described. 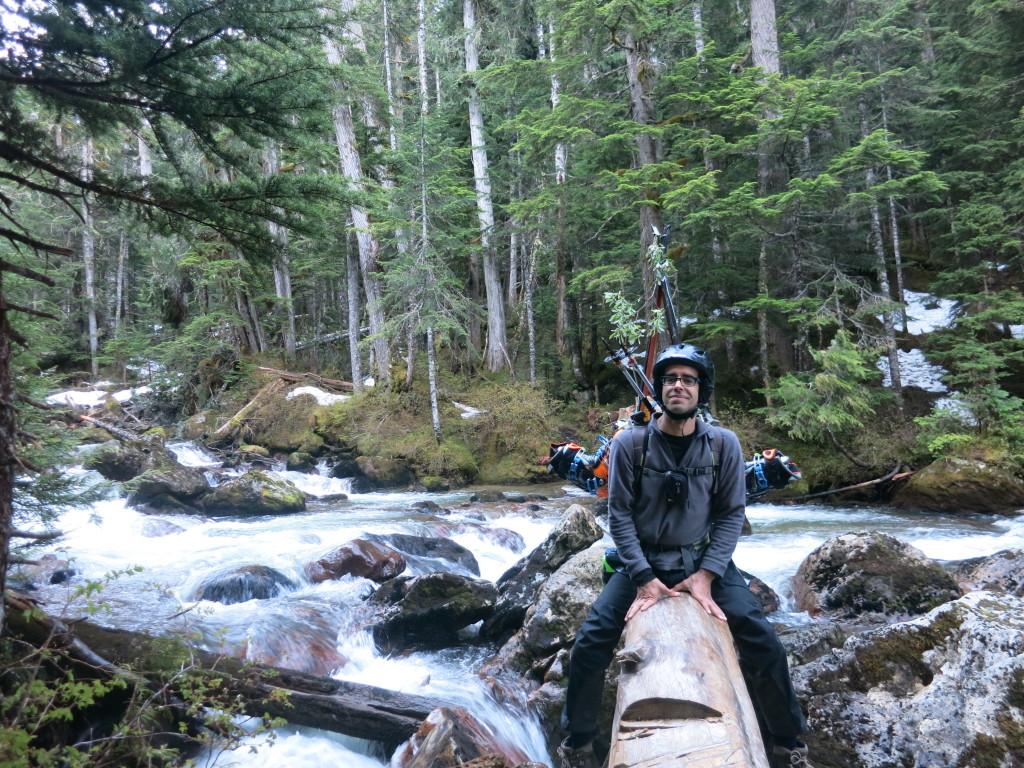 Two hours later, just before 9AM, and we made it to the top of the first bump. It was sunny, our hiking boots completely soaked, but we were stoked to see Garibaldi and Atwell from a different angle. We dropped our boots in a strategically sunny position (hoping they would dry for the way down), and figured no animal would like the scent of them enough to drag them around. Soon the views were impressive. We put skis on at 1400 m, but could have pushed it to 1300 m if we cared even less about our skins. It felt great to travel on skis, after all that slippery hiking. We were even treated to sights of a wolverine that stuck around for a while! 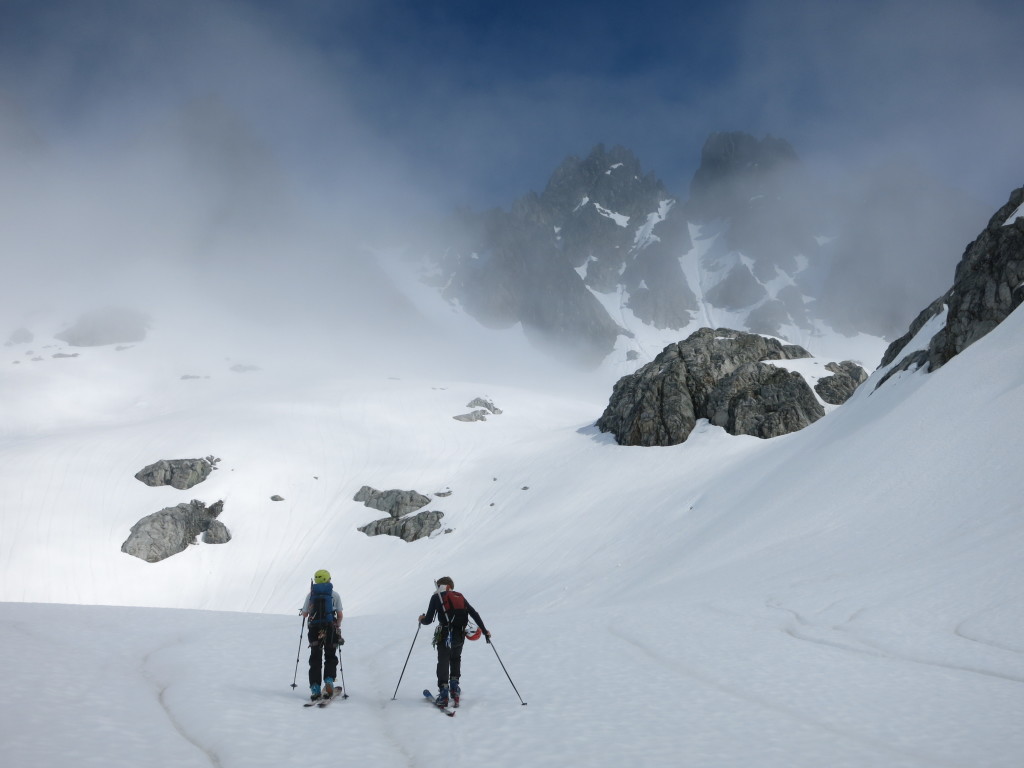 The kids making progress toward the summit, while clouds start to roll in

The forecast had been pretty good for Sunday, although I recall seeing clouds at 2000 m and clear at 2600 m. And this is exactly what happened – after the above photo was taken, we were engulfed in thick cloud. Lack of visibility prompted some faff to consider our options. In the end we decided to press on and hope the clouds would go away. The whiteouts only ended up lasting a few minutes at a time, and so we managed to see where we were headed. At some point it became too steep to ski without switching back a lot, so Vincent decided to boot pack. Birgit and I followed after some further faff. 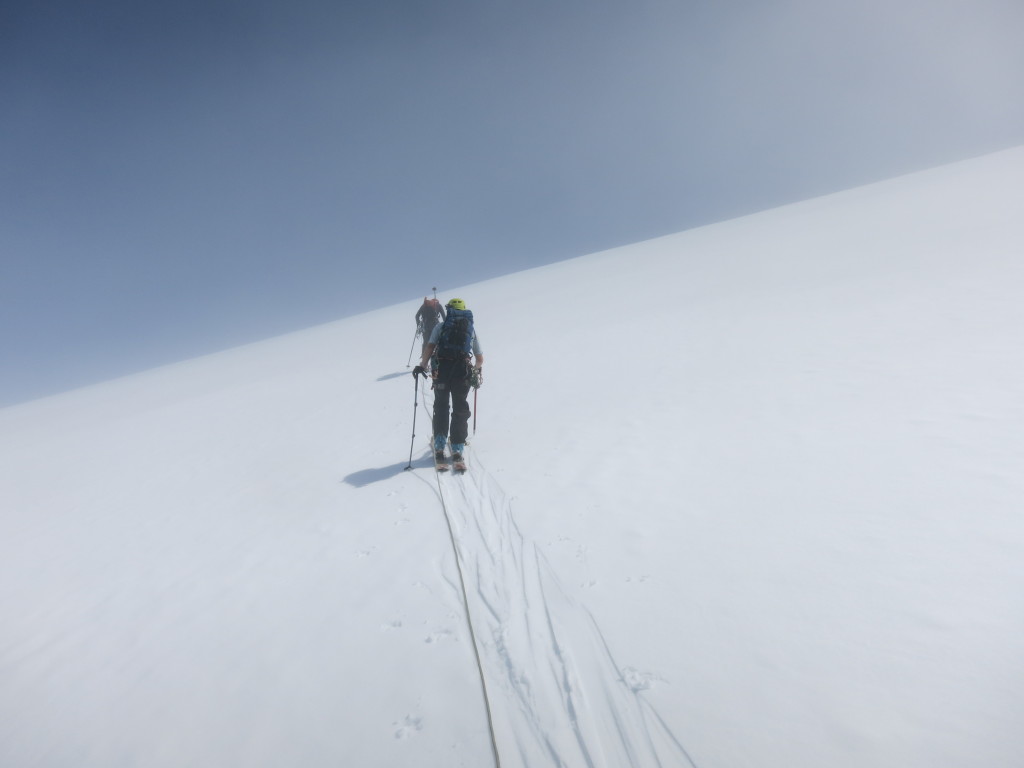 Roped up we went

Once atop of the steep hill, we realised we were likely on the glacier (by looking at maps and gps). None of us felt particularly confident in our abilities to assess whether or not roping up was strictly required, and with visibility not being the best, decided to make use of our  30 m ropes.

Indeed, mountain forecast had been spot on. It was clear above 2300 m, cloudy below. With high spirits, and baking in the sun, we pressed on, past Delusion pk and onto the final summit slope. At this point, we were still debating which one of the peaks was actually Mamquam, but as we approached it, it became clearer. Most of the climbing was over now, and we simply enjoyed ourselves, took in the views, and ate some more food. Not your every day lunch spot! 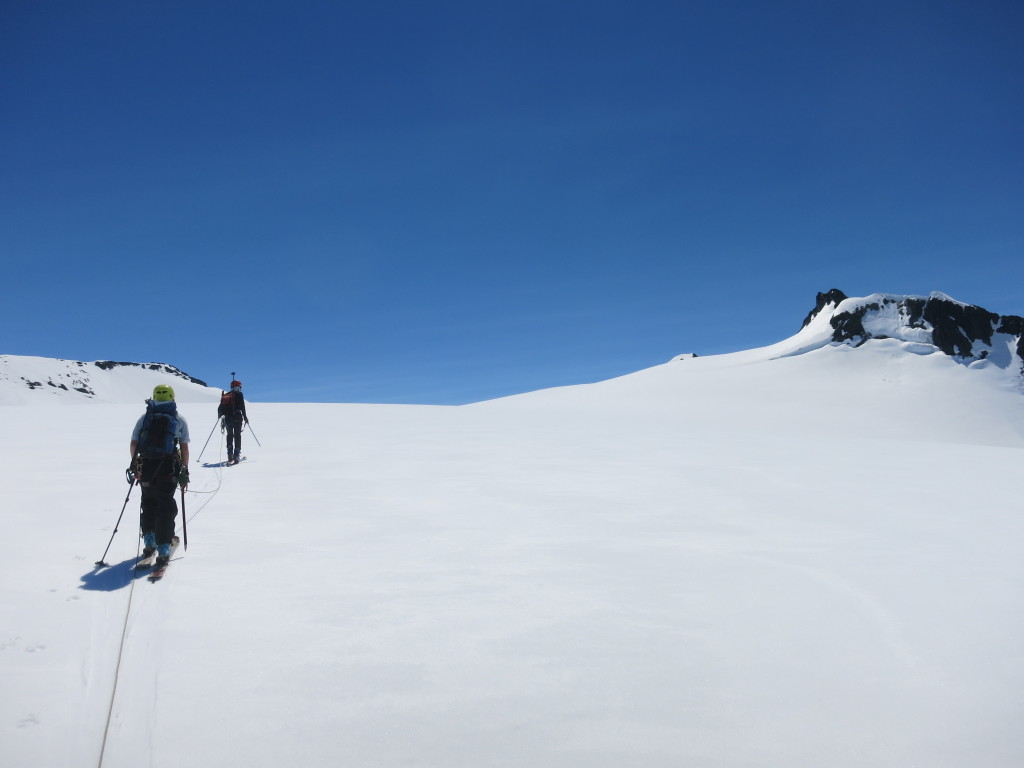 Delusion Pk on the right The final bootpack, skis left just after the bergschrund

The bergschrund was obvious, though still crossable with skis. The snow felt very solid, so we ended up bootpacking up to the saddle and left our skis behind. In retrospect, I would have probably taken the skis with me and enjoyed that extra bit of nice corn. 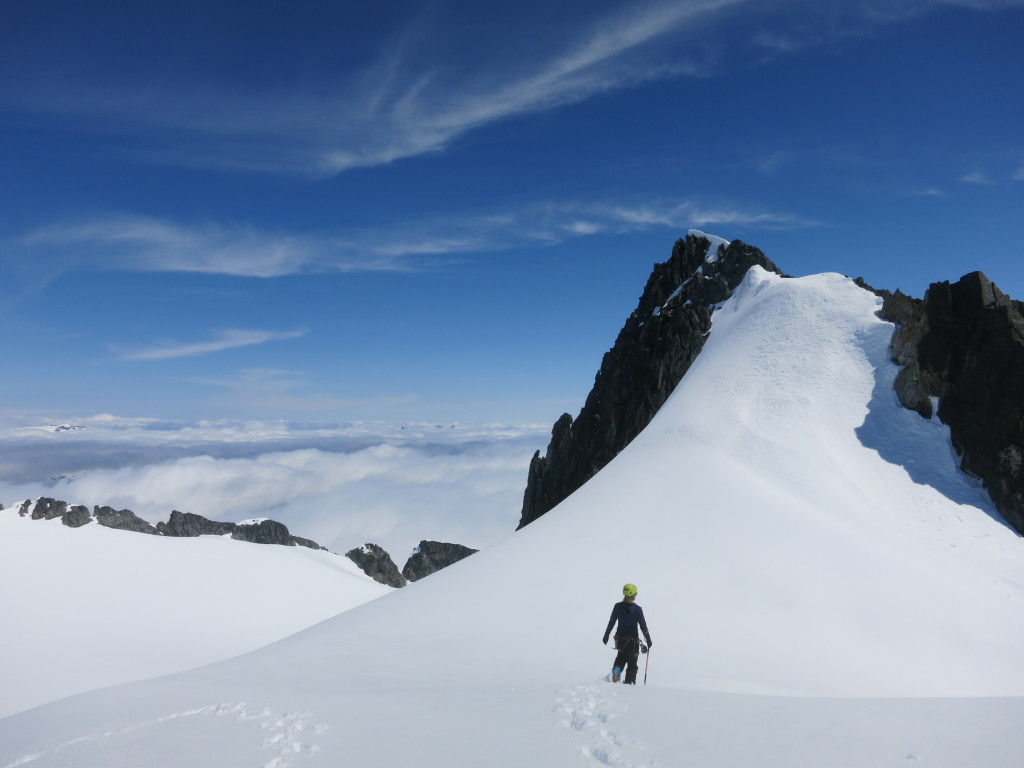 The last steep ish slope and scramble to the summit. Birgit leading.

Although I hesitated initially to climb to the actual summit, I soon saw how it wasn’t too sketchy once Birgit started on the slope. Vincent and I followed her beautifully made steps and soon were on the top. The view was incredible, as we were on the highest peak in the area. Garibaldi and Atwell were visible poking out of the clouds, the glacier beneath felt incredibly big.. For all three of us, this was one of the highlights of our ski season. Garibaldi and Atwell in the distance

It was close to 2 PM by the time we summited, and after some faff we started the boot pack down to retrieve our skis. We had almost 1300 m of downhill (on snow) ahead of us. The first section was awesome, with really nice spring conditions and great visibility. 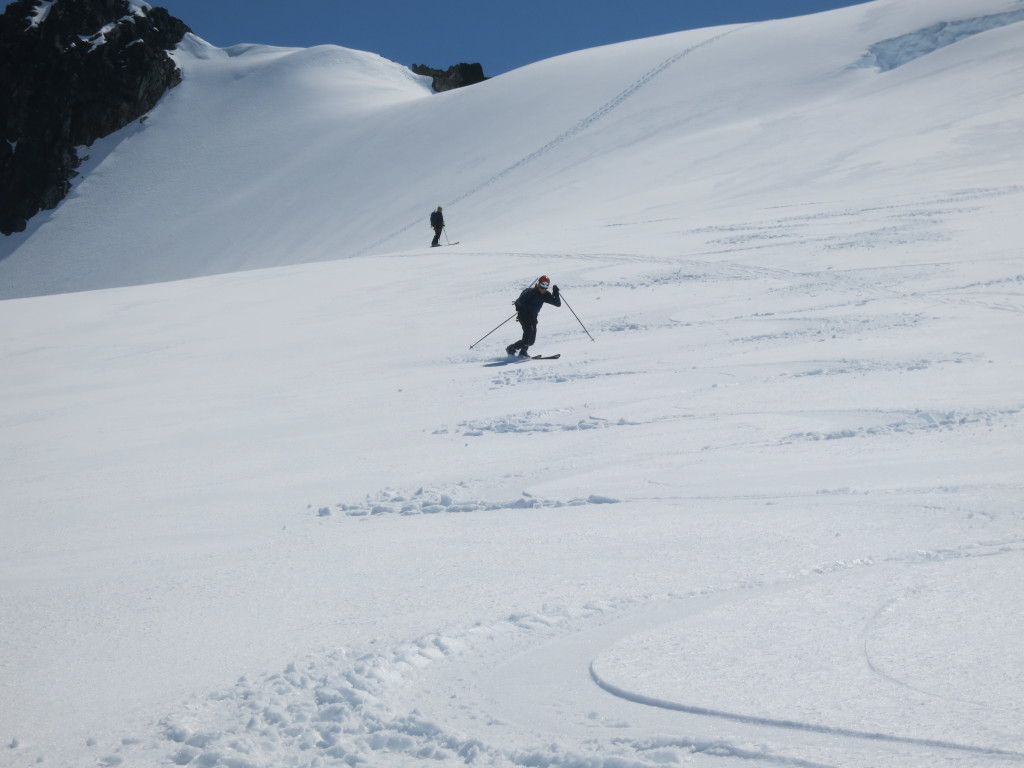 Vincent showing us how it’s done Soon we were back in the sea of clouds. Great to have the gps track to follow. It looks like Vincent is going to drop into a couloir, but it wasn’t so bad

Once in the clouds, and with reduced visibility, we simply followed our skin track. The steep boot pack we’d done a few hours ago, was rather nice to ski down,  I even attempted to do a few jump turns, which clearly still need some work. Slowly the quality of the snow deteriorated to very sun baked and at 1300 m, after plenty of survival turns in 30% snow and 70% vegetation, we decided it was time to transition back to soaked hiking boots. The hike down did not take long, though it was steep in parts and the kids slipped quite a few times – granted their boots had no grip in their soles.

Just before 7 PM we reached the car. All in all an excellent day trip. I look forward to exploring more of the area in the winter. Thanks to Vincent and Birgit for making it all happen! Full route below. 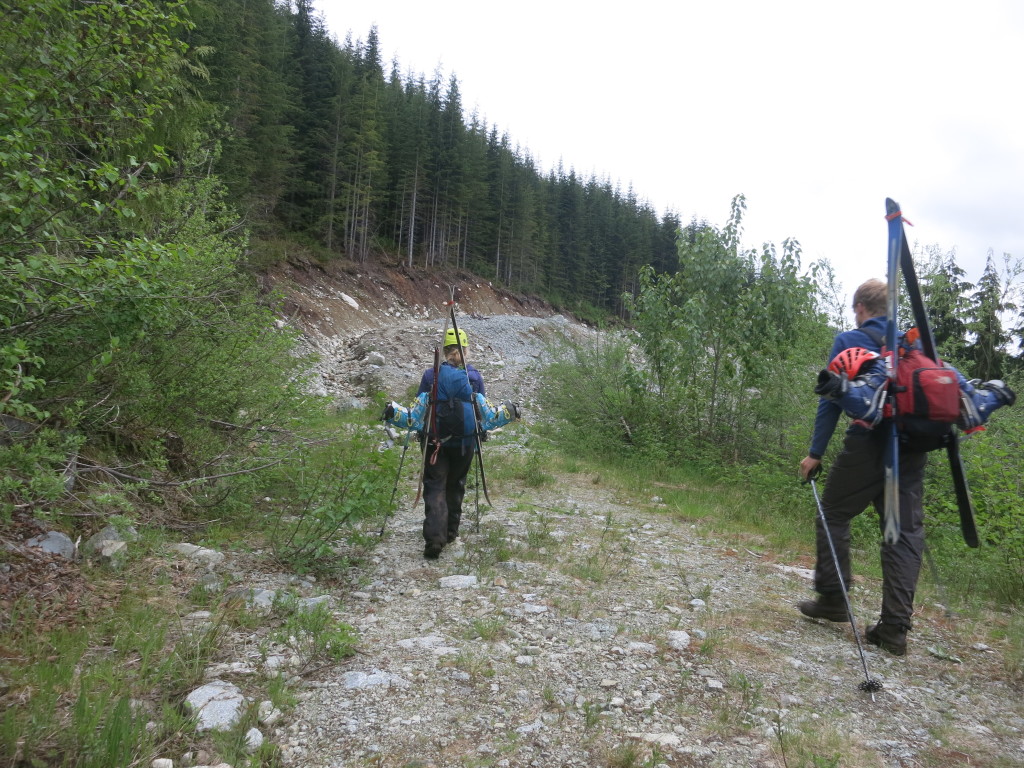 13 hours later and we are back