When I was thinking of a summer trip to do with a friend and kid free, the Tantalus traverse was the first to come into my mind. As I am not able to get out as much on bigger trips these days I wanted to do something that captures a lot of everything in one trip. Having done the traverse in summer 4 previous times I knew the route pretty well. Next up was choosing a partner to do it with. Rich was my first choice and he took no convincing at all. We had done the traverse together previously. So starting with an email on June 6 we began planning.

I made a detailed spreadsheet with all of the gear I was going to bring and later updated it with weights. I also put route and general information in there along with photos of the route and previous gear that I took. There is a lot of terrain covered and some key route choices that can save a lot of time. This is where the experience of doing the traverse many times is very helpful. There were 3 weekends I suggested as those would allow me to have the time off, Lena to be on call, and our in-laws to help out with child care if necessary.

The first weekend attempt didn’t materialize but the July 4-5 weekend seemed possible as even a guide had confirmed that conditions were getting good. Before the weekend though there was heavy precipitation that was landing as snow. We made the call not to go. Social media confirmed our decision when someone reported setting off a wet slide avalanche near Dione. The weather got better for Sun-Mon but we kept with our decision (not enough time for snow to melt) and from some people that did go it looked super wintery and not good for fast travel. We were happy with our decision.

The July 18-19 weekend approached and looked good. This is when we went. With most of the planning done previously we only needed a quick call to check in on a few things and set the meet up time. 05:00 we met at the Taylor Way Church parking lot. I made a mess while eating my breakfast on the drive as we listened to Tool. At the road to the cable crossing we stashed my bike in the woods along with a tupperware container of water and food for when we got out. After passing numerous cars and tents we parked at the Sigurd Trailhead. 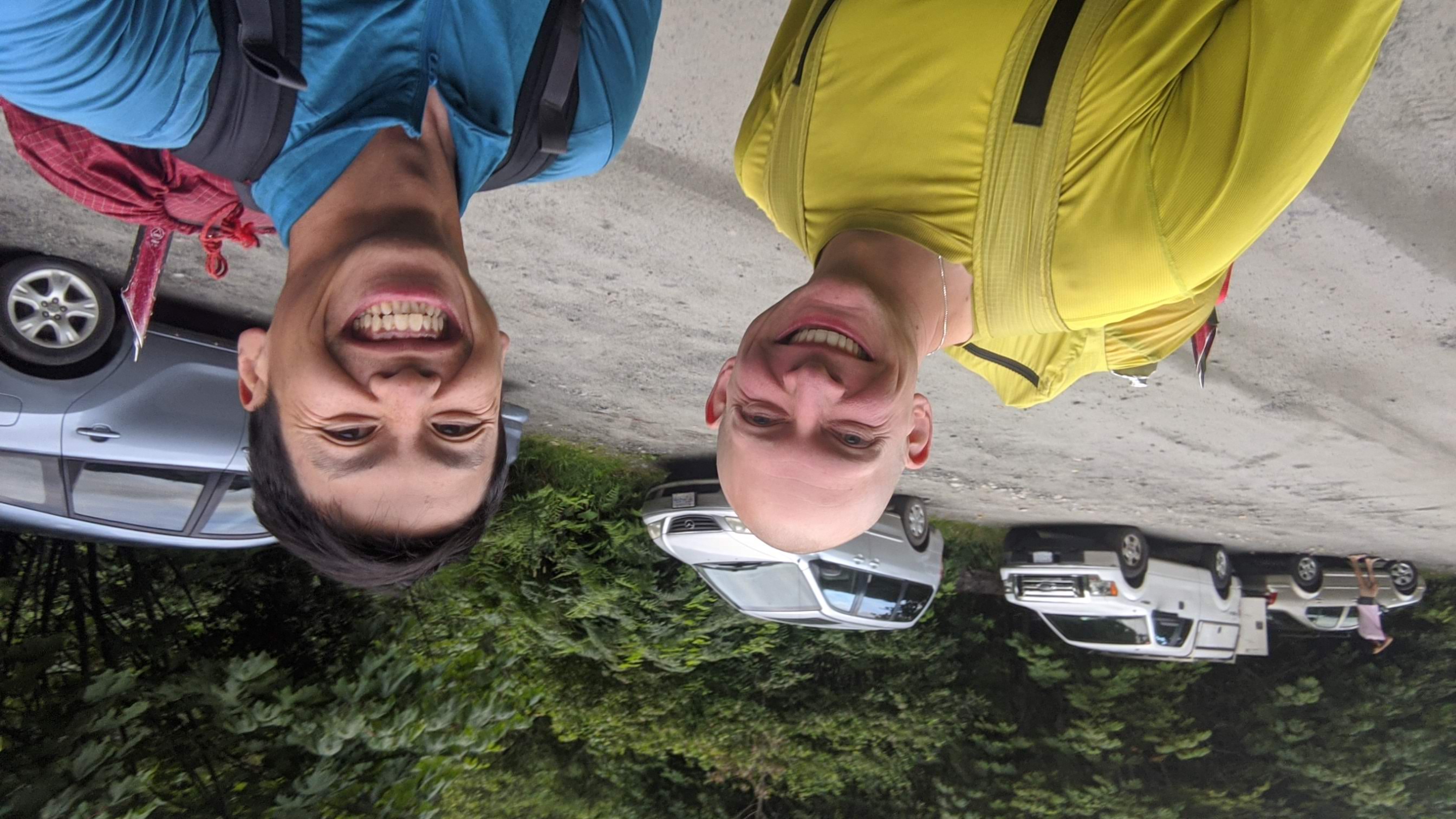 Sigurd Trailhead start at 06:45. Photo by Rich So.

Our approach for the trip was to bring overnight gear. We knew we probably could do it in a day but didn’t know for sure. Also, by bringing gear we had less pressure. If we did blitz through we didn’t have to use it. At 06:45 we started up the trail. With not having hung out much in a while we had a lot to talk about. While passing a group heading for the traverse, Rich was in the middle of saying, “I don’t really like exercise”. This gave people a laugh as we set a good pace past them. It took us ~2 hours to get to the old cable bridge crossing where we waded easily across.

At 09:17 we busted out of the trees and were in the debris slope beneath Pelion with gorgeous views. From there we followed the edge of the trees and made it to the ridgeline when it was easy. A snow plod took us up to the col where we started to see tracks of someone who was going up Pelion. While going down Pelion the travel was so easy I found myself occasionally running and boot skiing. We then cruised through the middle ground terrain and nailed the easiest route to the base of Tantalus.

A guided group had taken a helicopter at first light to the base of the North Ridge for the traverse. This helped us out by giving great steps up the steep snow to gain the ridge of Tantalus. Super fun climbing up ribbons of snow and past a really filled in bergschrund, thanks Junu-ary! On the other side of the ridge was another snow plod and it was hot. Rich was smart and put snow in a ziploc bag next to his body to cool himself down. I should have done something similar as I think I got a mild headache from the heat. I started doubting that I had brought enough food because I was suddenly feeling really hungry (I ended up with more than enough food).

Once off of that snow plod we were on the ridge proper. This is where the amazing scrambling begins. It was quite joyful and also a good recovery section as it is more varied and slower than walking on snow. It is also cooler as there is less reflection of light. This is just one of the many reasons to go on the trip, the ridge is stunning. I also had Will Stanhope’s words of wisdom (from his Zombie Roof Solo Video) in my head, “If soloing feels scary you are doing it wrong”. It is easy terrain but I didn’t want to be taking any unnecessary risk so kept checking in with myself. Also, we had hit prime conditions. Normally getting off a section of ridge to gain the last main section to the summit is hard. A short downclimb took us across instead of the usual rappel. From there we followed the guides tracks up a section of solid rock which sure beat the choss that I thought was the normal route. Thinking of it now I think that was probably the normal route when it was more snow. Anyways, it was great to learn something new about the route.

On the final section to the false summit we belayed. I had soloed it 3 other times and could do it again but especially being a father now I didn’t want to take the chance. Again, after that we then rapped down off the false summit which I had previously downclimbed. A quick trip up to the summit (at 15:45) had Rich pulling out his chocolate/almond/hazelnut pie (858 grams for the gram-conscious readers), the second time we’ve shared pie on the summit of Tantalus. Mmmmmm. From the top we could see the guided group walking off of Tantalus. Then we set off doing the raps, starting with one from the chain that “The Moose” had carried up from sea level, nearly twenty years ago! We found them fairly easily and didn’t have any stuck ropes (well one that was a little but we didn’t have to climb up to get it, just re-arrange and pull again). The descent off Tantalus is not trivial, and requires a high level of route finding to locate the rappel stations. Once again, it was helpful to have past experience to rely on to make this section efficient. We were at the top of the raps (two to three bolted rappels down a gully) on to the Dione Glacier by 17:45. 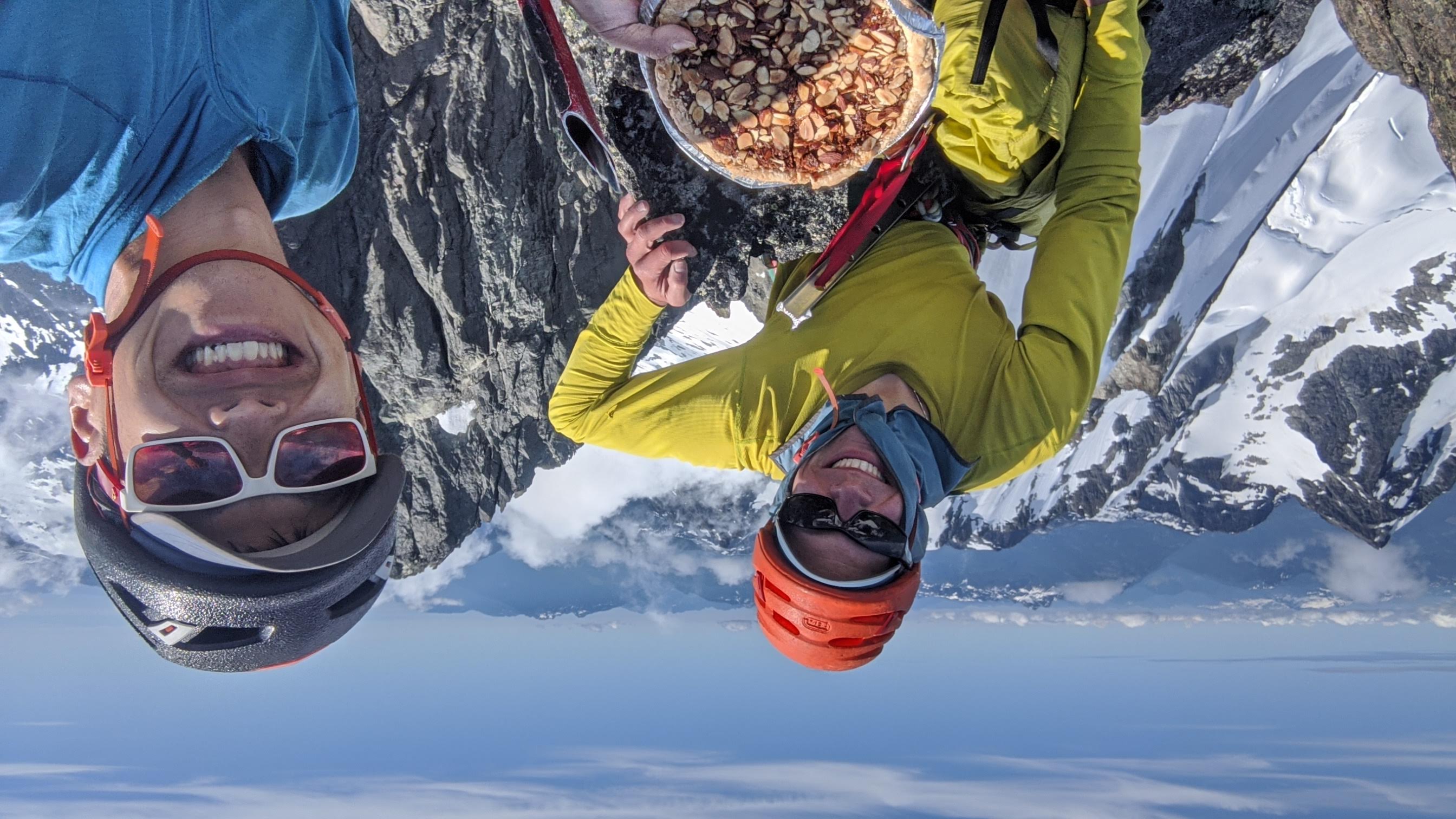 Summit of Tantalus. Photo by Rich So.

We made it to the Haberl Hut at 18:53 was where we had a bit of dinner (some bites of pre-cooked pizza). The beauty of having pizza for dinner, is that you can just stop and eat whenever you feel like it, and then keep moving afterwards. We chatted briefly with the guided group, but we were all pretty content to just eat quietly and take in the mountain views. Wanting to get the snow travel out of the way while it was soft, we continued on to the Russian Army Camp. It was cruisy travel and we then followed Eric Carter’s descent to the camp. The trail was a bit hard to find in the beginning but we were soon on it and making our way to the Lake Lovely Water Hut area. BC Parks would have a lot of work to do if they wanted to make the trail up to any sort of standards. Some items of note are a good chain hand over hand section, a swamp by Lambda Lake, a wet mossy down sloping slab, and some ankle eaters. Sure beats bushwhacking though so no complaints, it was just a fun topic of conversation while we bumbled with headlamps on.

We got to the dock just before 22:00,a 15 hour day. We could have moved faster, but it was just a really nice enjoyable walk in the park all day, the hours and elevation just all seemed to fly by in a good way. If we wanted to push we could have gone home but I wouldn’t have felt safe driving, plus, it was a beautiful camping spot! Unfortunately the dock was not installed so we dunked in the lake. We set up our sleeping gear on the dock which was on shore and had our pizza dinners. 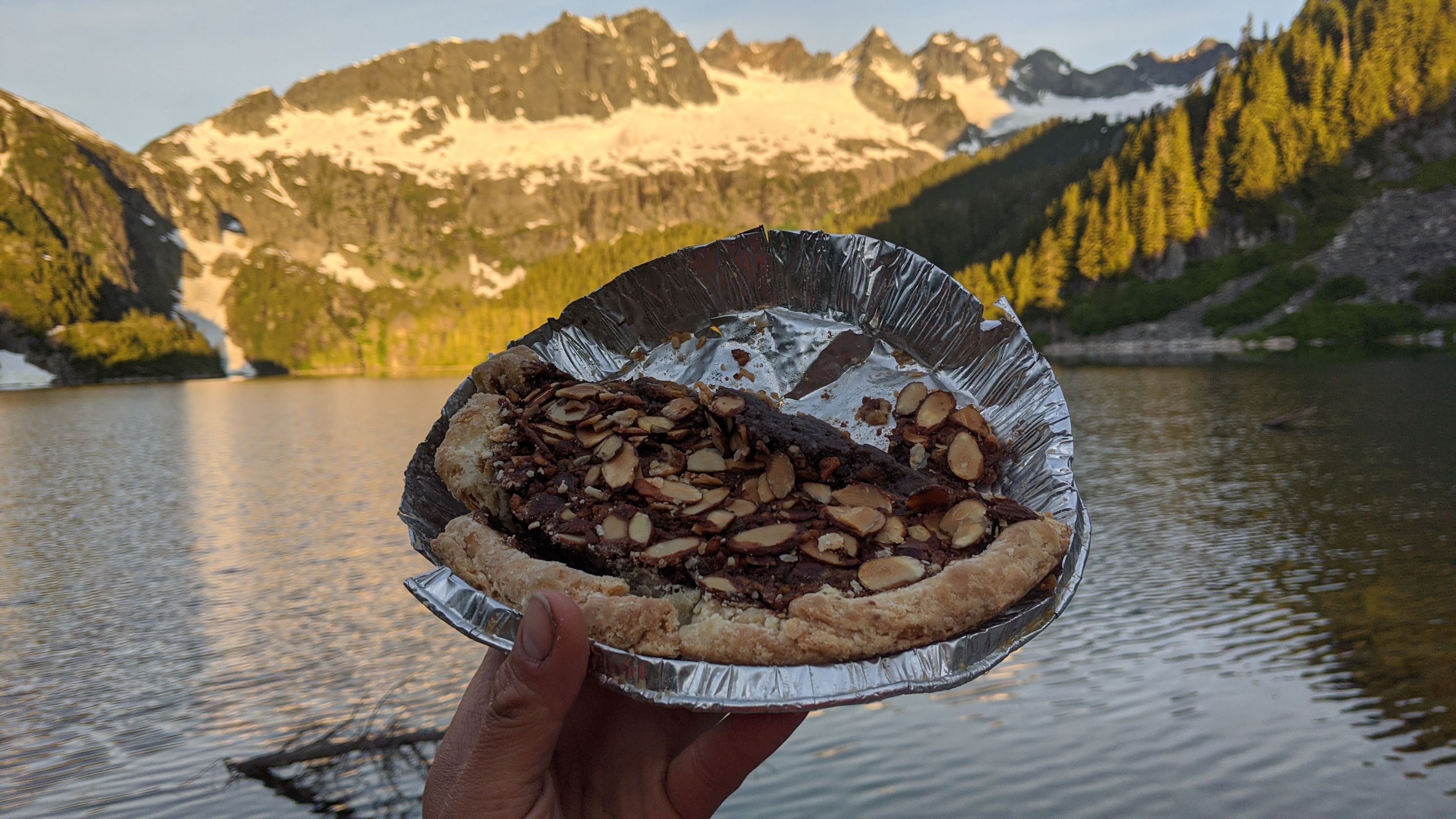 Crescent Glacier and Crescent Pie early in the morning at Lake Lovely Water. Photo by Rich So.

It was a clear night and we woke up at 05:00 to a great view of the LLW cirque. Eric Carter and a friend passed me in the morning, on route to complete the Lake Lovelywater circumnavigation in a single push After eating oatmeal in a ziploc bag along with some pie, we started down. The trail went by fast and we made it to the boat launch just before 08:00. I inflated my thermarest and floated across. The water level was higher than I had previously swam it in but knew I had a very high safety margin last time (i.e. I got across the other side with plenty of time). It worked out great and after getting to the other side I let out a whoop and Rich responded. I then happily floated down the rest of the river to the pull out at the cable car. 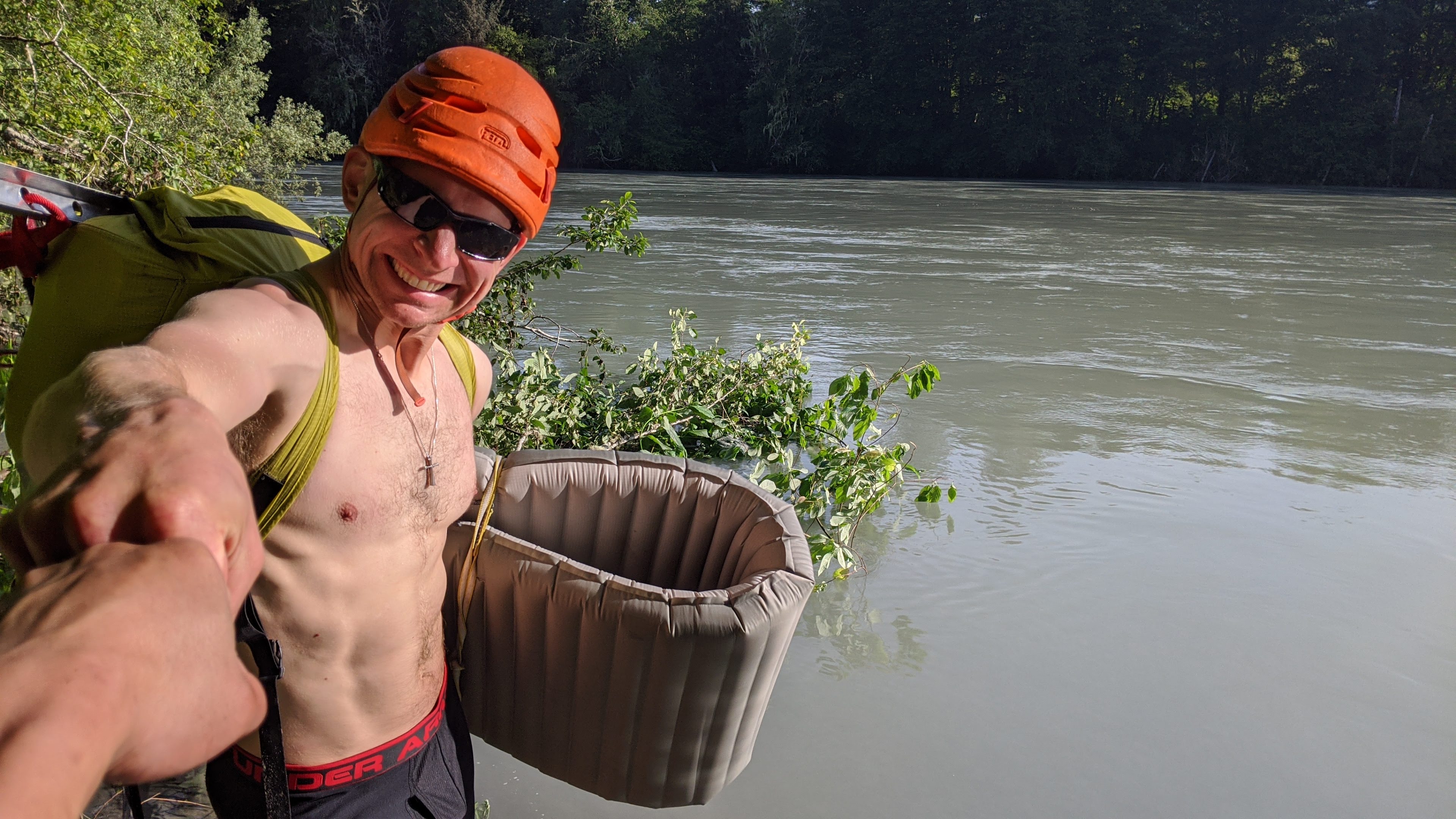 Ready to float! Photo by Rich So.

Once at the cable car tower I ran the dirt road section to the stashed bike. Chugged some water and grabbed a bag of almonds and cranberries. I then started biking the 20km while eating food. It was all going well until I turned onto the Ashlu Road. My bike stopped with the rear wheel rubbing. It is an older bike so no quick release. I kicked the wheel into place and disconnected the brake. This lasted for ~500m before it rubbed again. I repeated this once more but then it wasn’t working any longer. I didn’t have a wrench to align the wheel so I kicked it once more and walked the bike the last 1km or so which was a bit demoralizing. After driving back I picked up Rich and we were on our way home.

This was a fantastic trip with a great partner. We did some good pre-planning, waited for the optimal weather window, and had an awesome time. No pressure as we had bivy gear and no strava so just two friends out for a walk in a beautiful provincial park. If you have any questions about the traverse let me know as I love the area and sharing knowledge. All the pictures can be seen here: https://photos.app.goo.gl/p4vm7WeXtAdNqAHk9. The majority are from Rich So, they are the ones that are of smaller size.