On a smoky mid-August Saturday, a group of 5 VOCers crossed the Squamish River to the Lake Lovelywater trailhead and back again, using a large variety of methods. Since this day was 19 hours long and we never got further than maybe 4km from the cars, you can be sure that we are experts in the art of faff and the diversity of crossing methods.

We arrived in Squamish around 7am, and the faff began. Nothing out of the ordinary – we parked far away from the yellow gate as per the VOC Wiki’s recommendation, went over which gear we needed to cross the cables with, and walked a few kilometres to the cable crossing at the river. Nicole was the first of the group to cross. 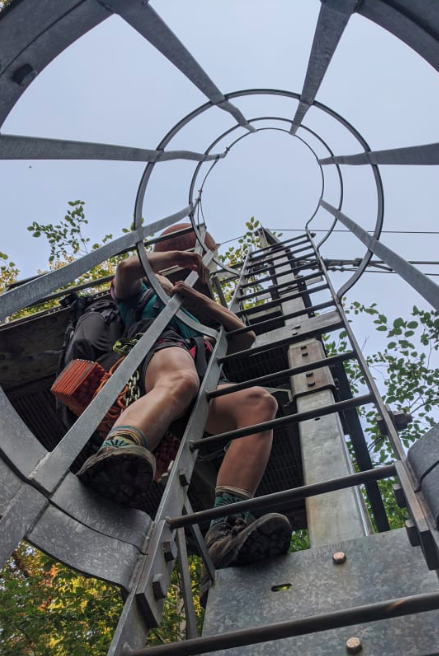 Nicole climbing the tower on the Squamish side 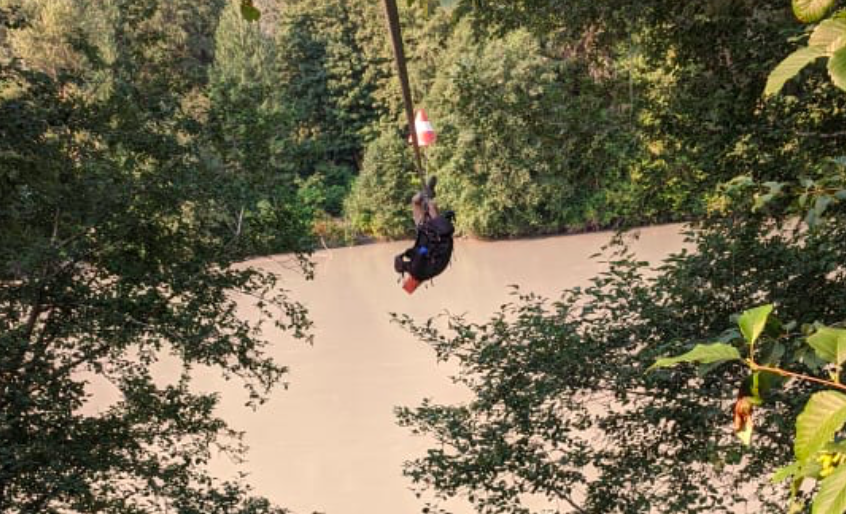 This is the classic method used to cross the river when no boats are available, and is described well on the VOC Wiki. Instead of weight-loading our climbing biners on the cable, we had bought small lengths of chain which we used to hang from. While very secure, this method still takes a while, especially with all the extra drag created by the chains.

A group we met later had bought large metal lifting hooks, which seemed to be a superior alternative as they caused way less friction.

After witnessing the faff, time, and effort needed to accomplish the Tyrolean, we became tempted (specifically Haley, Jacob and I) to invest in a pulley which would allow us to zipline across the cable. As I began helping MJ set up on the cable, Jacob went back to the car, and drove to Triton in Squamish to find the magic tool which we figured would remove all of the faff from the trip… 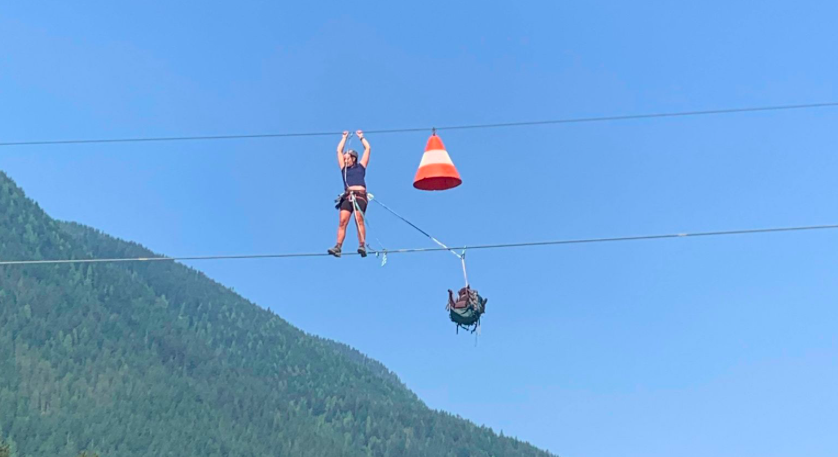 This involves walking along the lower wire while holding onto the upper wire. The pack and two personal anchors were clipped onto the lower (thicker) wire, while a shorter sling was clipped onto the upper wire. The upper wire has (4) aircraft warning markers along it, so any clips on the upper wire must be unclipped and moved to the other side of each marker. The distance between the two wires also increases a bit towards the middle of the wires, so shorter people may have a more difficult time reaching the top wire (or getting it if they let go while on a longer attachment).

MJ said it was near impossible to rest while crossing, as you always need to be hanging on tight to keep your balance.

While MJ was crossing, Haley managed to find another way across. 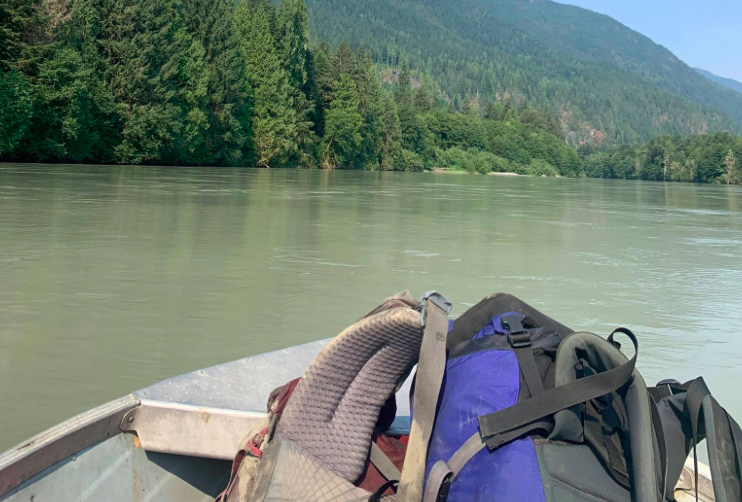 Hitchin a Ride, demonstrated by: Haley

This method requires a motor boat showing up and offering a free ride to the other side.

Since we didn’t want to leave Jacob alone on the other side, I stayed put and Haley went across with our packs.

Shortly after MJ had reached the other side, we got the text (“this thing is f*cking ridiculous”) that Jacob had purchased the ‘8-ton yarding block’ suggested on the VOC Wiki. Jacob estimated it weighed around 40lbs. He also went to Canadian Tire to pick up some fishing line, so that we’d be able to pull the pulley back along the cable for the next person. At 11:21am, he parked the car and began walking back to the river crossing. At 11:26am, we got the text “Soooo, there’s a bear on the service road”. He ended up backtracking and walking along the main road until the yellow gate, where he had to turn back into the woods. I started walking towards him on the dirt road with some chains and loud music and met him shortly. I offered to carry the pulley and he did not hesitate to hand the beast over. The weight made me begin to doubt its faff-annihilating capabilities. 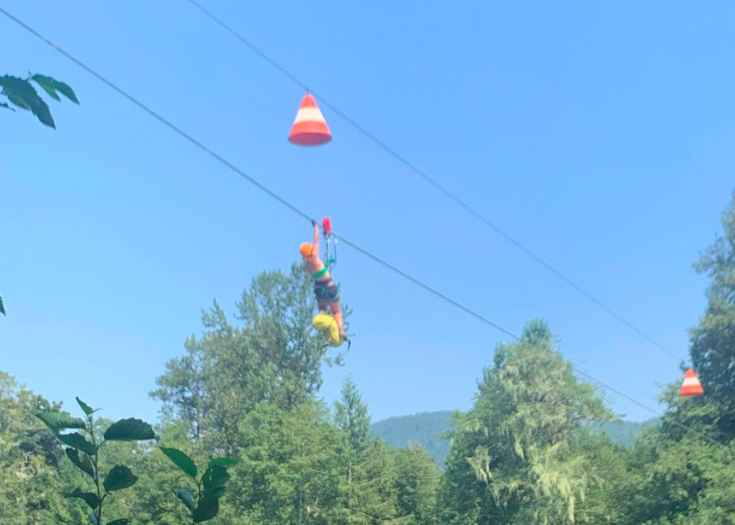 High stoke for the pulley may lead to this method, which involves a sweet 20-second zipline stopping at ⅔ of the length of the cable. It then involves a) realizing you cannot reach the cable to pull yourself the rest of the way, b) not having any extra gear to either bring yourself higher or to make a prusik to keep from sliding back, and c) not having gloves. AKA, deep regret.

Fortunately, there was also a pack attached with me which I could then ‘stand on’ to reach the cable so that I could begin pulling myself along the cable. This lasted very shortly, as I got to a point steep enough where I began sliding back, and my hands didn’t have as much skin on them as usual. At this point, a care package consisting of a sling, a full nalgene, and gloves assisted down the cable by Nicole was greatly appreciated, even if upon the first sip of the water Haley exclaimed that it was unfiltered. After clipping in closer to the pulley and making a prusik to keep from sliding back, this ‘method’ finishes a heck of a lot slower than it started.

This method might be for you if the fishing line attached to the pulley becomes caught in some branches, and after sending someone (MJ) out on the line to fix this fails, you can no longer pull the pulley back to your side. Instead, a ‘care package’ attached to the pulley is released from the opposite side and you must do the Tyrolean method along the cable until you meet it. At this point, you can then attach yourself to the pulley to have less friction (no more chains) as well as attach a prusik so that you do not lose progress.

Now we had all five of us on the other side of the river! Hooray! It was approximately 3pm. After some more lovely faff, we finally began hiking to Lake Lovelywater. It wasn’t long before some members noticed how smoky it had gotten, and felt it in their breathing or were feeling nauseous. The latest forecast (we still had cell reception) showed that the current air quality was very bad, and would not improve the next day. There was a long discussion including our current physical states, our future lungs, and the point of the hike if there was no visibility to do any fun scrambles. We decided to bail on the trip and head back to Vancouver that evening.

Unfortunately, when we got back to the river crossing around 5pm, traffic on the cables had picked up considerably. Fortunately, most were travelling towards our side (all originally planning on doing the hike, although two groups ended up just camping on the trailhead side of the river) – this meant that despite the failure of the fishing line, we could get people on the other side to travel back on the pulley, thus allowing another one of our group to use it. Of course, switching people and their packs off and on the pulley at each side made for copious amounts of faff (vs setting up your Tyrolean while the other person is on the line). Did the zipline portion of the pulley make up for it? Maybe. But also maybe not.

Having more experience with the crossing at this point, our methods for crossing on the way back were a bit more effective. 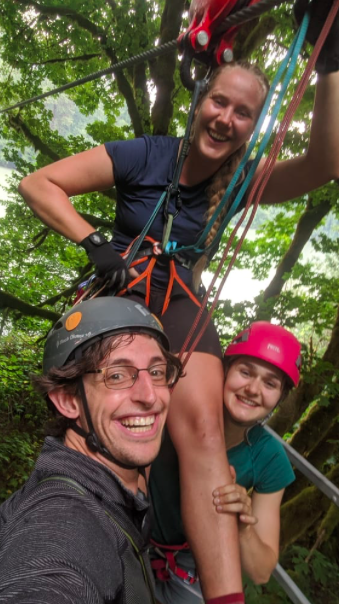 This method is arguably the fastest, and involves hanging very close to the pulley and then unlocking beast mode once the pulley slows down, using gloved hands to pull yourself the rest of the way to the tower (~30m, depending on how aero you were on the flying portion). Instead of losing momentum and faffing around to add a prusik, simply pull yourself and your pack without stopping so as to not start slipping backwards. It should be noted that once started, it is difficult to add a prusik, as your other hand would need to be holding on and keeping you from sliding back. Hence, full send or no send. 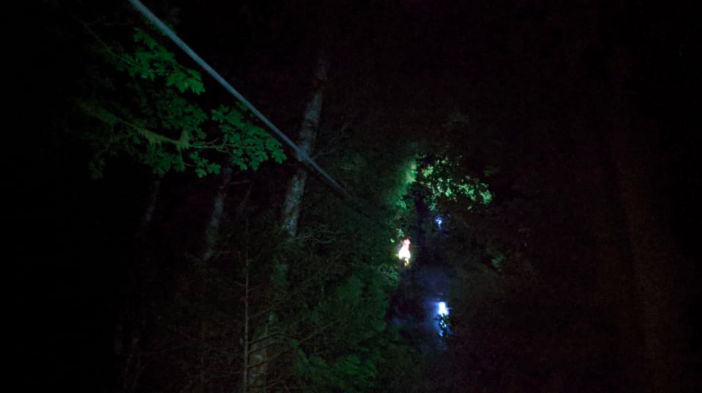 This method was the intention of most methods involving the pulley. It involves attaching a prusik on the cable after the pulley slows down, so that you can begin pulling yourself the rest of the way without sliding backwards when taking a break.

This method involves ferrying across the river in an inflatable dinghy with your hands.

I had bought a 15$ inflatable dinghy (off-brand Explorer 200) with the intention of floating on it on Lake Lovelywater in the evenings. I never intended to use it to cross the Squamish river, since I didn’t have a paddle, lifejacket, or any kind of backup. However, while waiting on the Lovelywater side of the river around 9pm, another group arrived by boat: one canoe, one dinghy with a kayak paddle, and one dinghy paddling by hand. They confirmed with us that there were no rapids downstream, and this was enough to convince me to cross by floaty. I borrowed their pump and blew up my dinghy, and at dusk I left a spot a few hundred metres upstream from the cable with myself, a fleece, and a pack of Reeses Pieces-covered peanuts in my dinghy. I was laying face down, paddling with my hands, and ferried over to the other side of the river rather quickly – a few hundred metres of river provided way more time than needed to cross. I am now fully convinced boats are the way to go to cross, although ideally not the ‘minimalist’ way. It should also be noted that sweepers were still a hazard, you should understand how to ferry, and the river may be a lot different in the spring/early summer.

Jacob brought my pack over when he crossed on the cable (thanks Jacob) and we had everyone back across around midnight. A cherry of faff on top was me losing my car keys for about 10 minutes right when we were ready to drive away. We met at the A&W in Squamish to return biners to their correct owners, and arrived back in Vancouver around 2am. 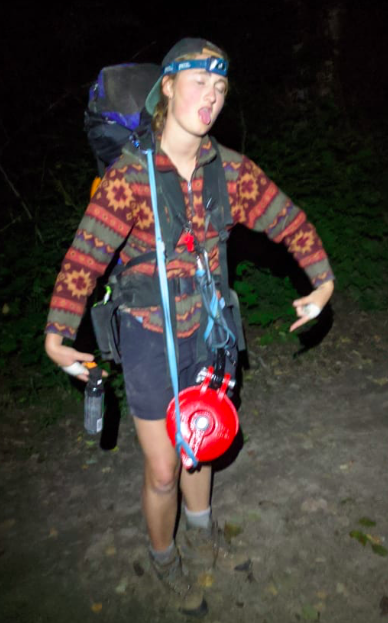 Me with the beast

A great day? A day indeed. Thankfully, Triton has since agreed to let us return the giant pulley, and we will begin tracking down whoever suggested that thing in the first place.

This entry was posted in Other, Trip Reports and tagged faff. Bookmark the permalink.