NMAG Trip: A Through Hike in the Land of the Midnight Sun

What: Laugavegur and Fimmvörðuháls trails

Where: The Highlands of Iceland

How: The Neil Mackenzie Adventure Grant

Snow, wind, rain, geysers, volcanic glass, black sand, Rhyolite mountains, 24hr sunlight. All of these were in abundance on the Laugavegur and Fimmvörðuháls trails in the highlands of Iceland. Thanks to the generous Neil Mackenzie Adventure Grant we (Linda Kiritchkov and Mason Slavner) were able to experience all of these things around the summer solstice in 2022! 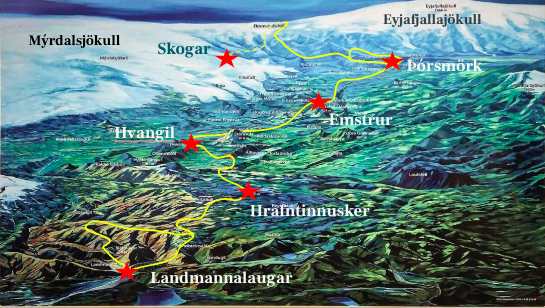 Note: Red stars may be smaller than they appear.

One thing you have to know about Iceland is that everything is wildly expensive. This led to quite a bit of dirtbagging (technical term), including spending the night before our adventure camped on a patch of grass behind a hill about 100m from the gas station/bus stop where we would embark on our journey to the interior highlands of Iceland. 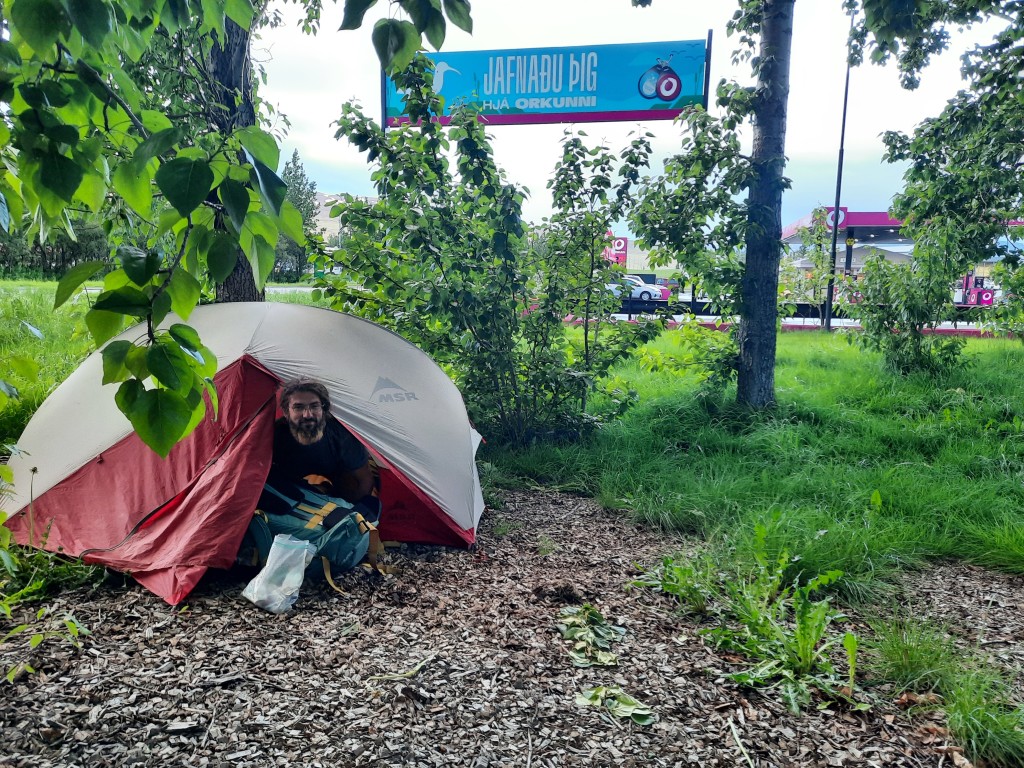 After a 3hr ride over streams and dirt roads on a very burly 4WD bus, we arrived at our starting point. We set up our tent and embarked on the Skalli loop. Hiking along the valley floor, then cutting up the side of one of the mountains in the range, we were rewarded with panoramic views of rhyolite mountains in every direction. On the return, the first of many geothermal vents popping out of the earth presented itself, steaming apocalyptically with yellow sulfur deposits accumulating at the mouths. Back at our base camp we decided to end the day by taking a dip in Landmannalaugar’s famous hot springs. Ignoring multiple signs warning us of “swimmer’s itch”, we soaked in a river of geothermally heated water until our fingers and toes looked like prunes. Landmannalaugar translates to ‘land of the peoples’ pools’, and it did not disappoint.

Knowing that we were about to leave the comfort of basecamp (a flush toilet, a large communal cooking tent etc.), we had a slow morning of commandeering free food from a basket that previous hikers offloaded unnecessaries into. Feeling excited to have more tasty snacks at our disposal, we headed back to our tent only to find that the wind had picked up so strongly that one of the poles poked and tore a gaping 2.5ft gash in the fly of the tent. Linda pleaded for duct tape from the SAR team on site, and we patched her Hubba Hubba so that it was stronger than ever. Now that we were truly ready (and 200g heavier), it was time to move.

We did not realize just how busy the Laugavegur trail would be. All of the pictures seemed quite wild, but the reality of the thing is that international adventure groups come here by the busload. To avoid the crowds and take advantage of the 24hr sunlight, we embarked at 4pm – a successful method for getting the trail mostly to yourself. Hrafntinnusker mountain campsite is a hillside strewn with sharp volcanic glass rocks the size of toasters. We checked in with the hut warden and they warned us that there would be yet more (and much worse) wind that evening. Thusly, we spent several hours constructing a wall around our tent with the aforementioned hunks of glass in an effort to stave off the 100km/hr winds that Hrafntinnusker had in store for us. Miraculously, we managed to survive the night without punching another hole in our tent. 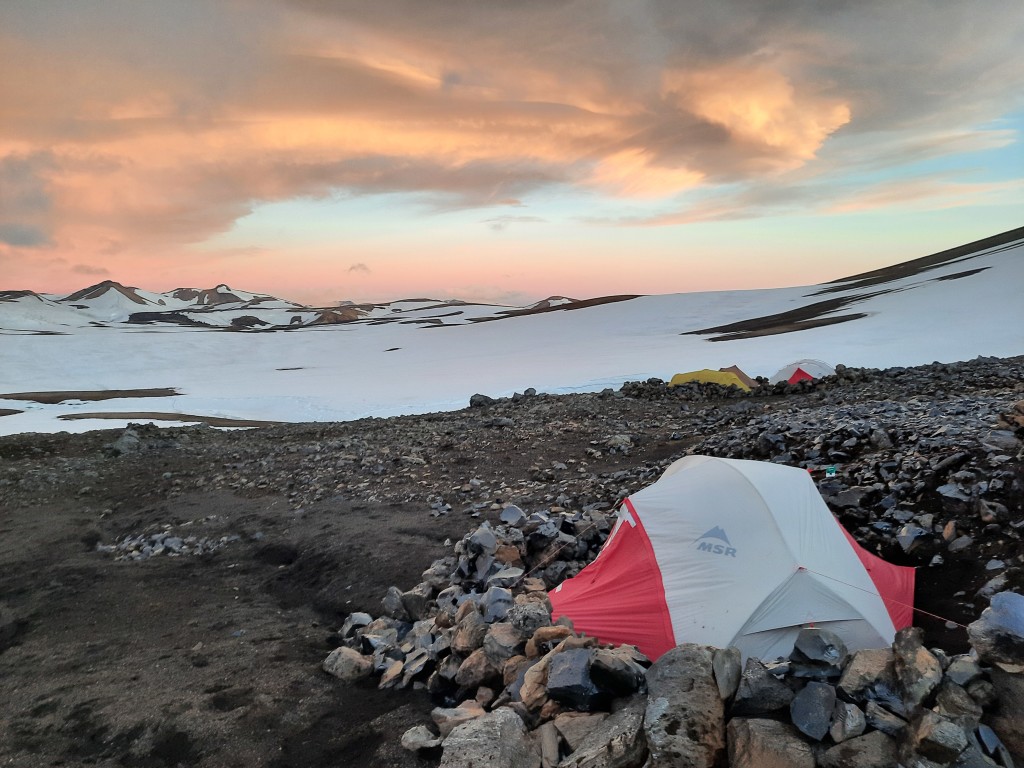 Playing house, building our wind barrier until past midnight – though you wouldn’t know it by how light it is.

Success – we survived the night! Another jaunt over mountain passes and snow-covered glaciers brought us to roiling steam and water vents. We arrived at the first possible site – Álftavatn – but it was horrendously busy so we decided to push onwards. We could not imagine how busy it would be on this trail during the peak of the season; we were only there one week after the roads had opened up. Most of the huts had showers, hut wardens, wi-fi, and 4wd access. Large tour groups would carry day packs, and their tour organizers would lug overnight gear and food in trucks from hut to hut. Not us though! We intrepid, rugged travelers carried everything we needed; a demonstration of our true grit. Under the strange twilight of midnight in Iceland, we successfully forded the first of several rivers on the trail and set up camp in a black sand valley surrounded by equally black mountains.

Fields of black sand are made by the erosion of volcanic rock and distribution of glacial outflow.

As we approached our second major river fjord, a French girl hiking in the opposite direction warned us about the cold water. “You will be screaming in pain”, she said, Frenchly. With mild anxiety we approached our target. Thigh-high water rushed along, and we shoved our pants into the top of our bag to make the trip. Perhaps Canadian glacial-fed outflows have prepared us better, or perhaps this particular Frenchwoman had a low threshold for the cold, but the water was truly not so bad. 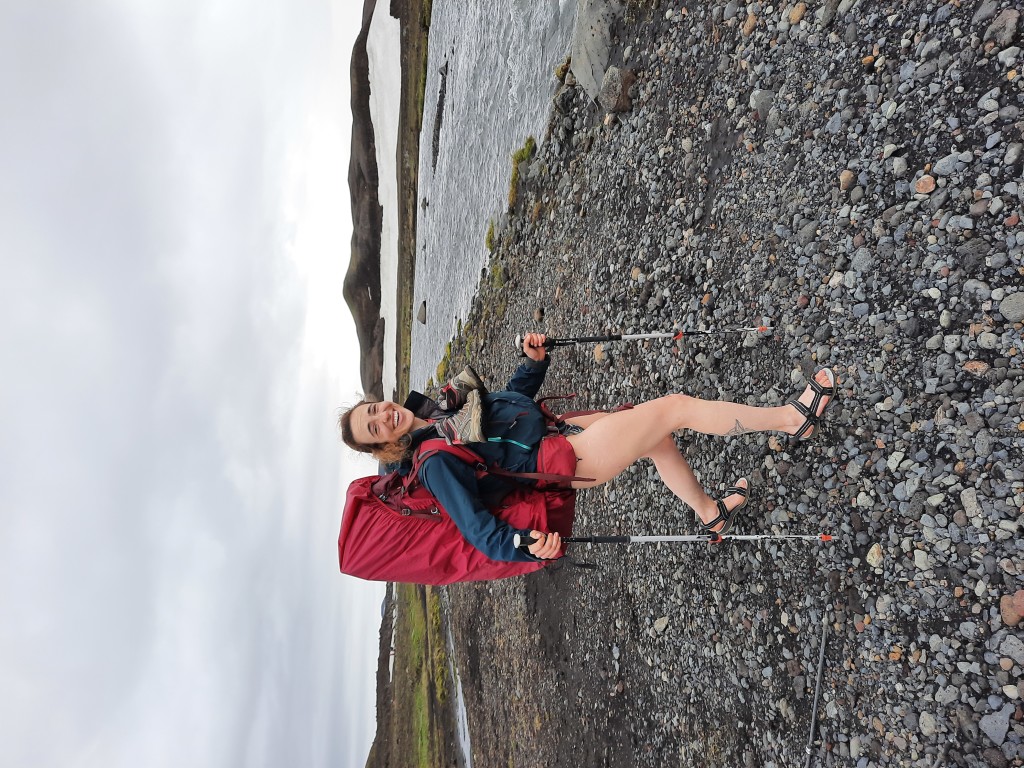 Our timing could not have been better arriving at the site, because nearly the moment we finished setting up our tent and creating a nice cozy nest for ourselves, more wind and rain swept in through the mountains. With each gust, the tent sagged notably inwards. Each of us made a silent prayer that this would not be the last gust Linda’s tent withstood. Needless to say, we spent the entire rest of the day in the tent. Mason read a book, and out of boredom and desperation Linda played backgammon against herself. 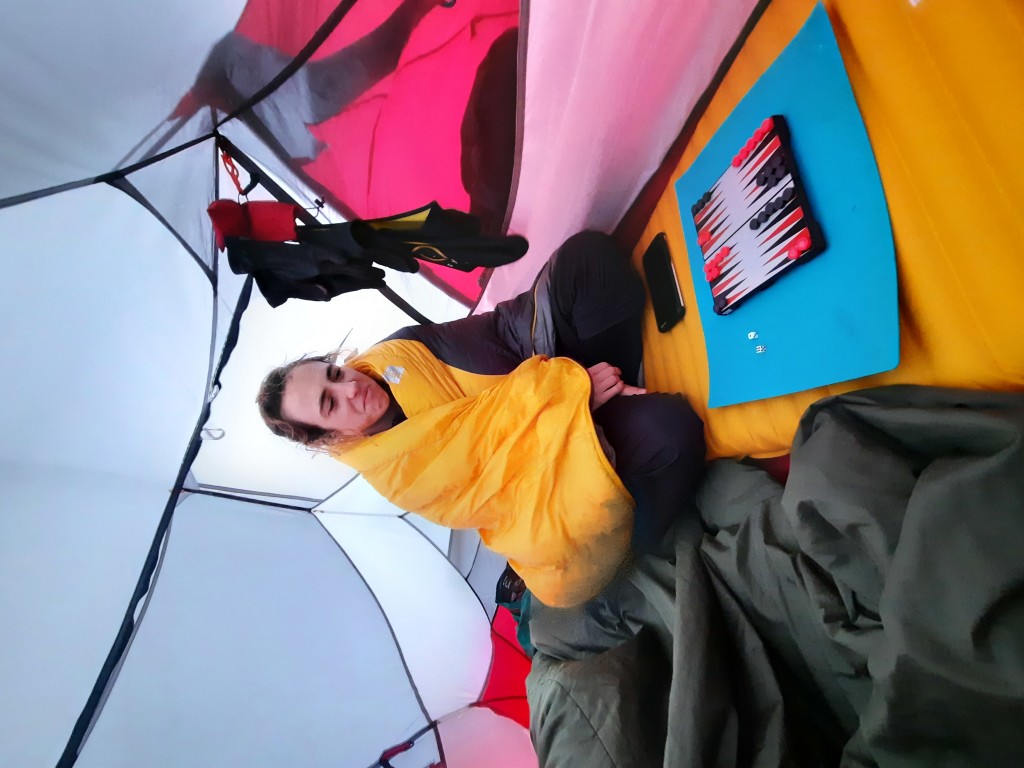 The true face of despairing boredom.

“Summer” really is a relative term, isn’t it? Most days we were on the trail were chilly, windy, and often rainy. One day Linda wore buffs over her gloves because they weren’t warm enough with the wind. Not today though. On day 5 we finally got the summer weather we had been waiting for, no wind, no rain, no clouds in the sky. And the entire 17km trek felt exhausting. Maybe it was the fact that we were both hitting a milestone on day 5; both of us had officially broken our personal records for distance on one continuous hiking trip. Or maybe it was the fact that we had reached a low point (in the valley, not in our moods). Either way, we were exhausted by the time we reached Þórsmörk (pronounced ‘thorsmork’). At the valley floor, things were much more lush and lively.

Þórsmörk is the end of the Laugavegur trail, and the beginning of the Fimmvörðuháls trail. There was a huge hut, a bus area, and people celebrating the completion of their hiking tours with drinks and revelry. Another perfect place to raid the ‘free food’ cupboard and rest our worn-down tushes. We bumped our camp over a couple of kilometers to be away from the riff raff and settled down for the night a little closer to the start of the next portion of the trail.

We opted to take a rest day at Þórsmörk. Having a day where we didn’t have to break camp in the wind and rain before lugging around heavy packs for hours was a dream. However, despite knowing that our last and longest day of the trip was still ahead of us, we decided to do a small hike in the area (because, apparently, we have no chill). Where the Laugavegur trail is much rockier and moonscape-ish, this portion was lush and green. We kept remarking at how Avatar must have drawn its influence from this place. 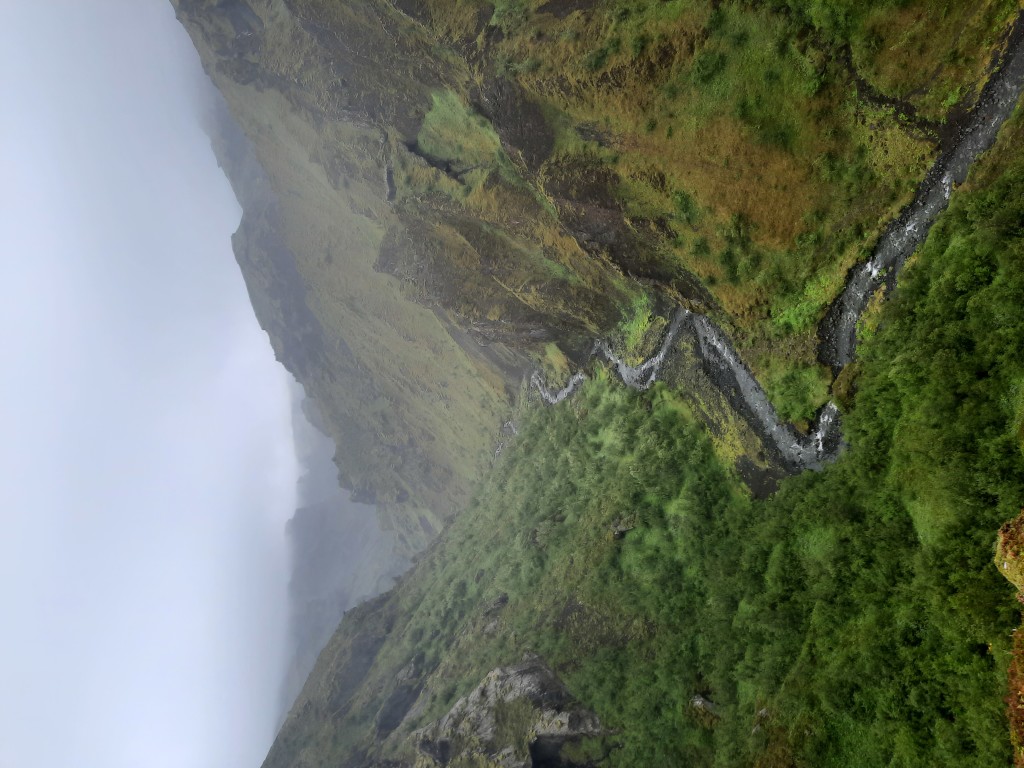 Even though we’d decided to stay at Þórsmörk that evening, we wouldn’t have had a choice either way. We learned that the Fimmvörðuháls trail had actually been closed for the day due to (you guessed it) heavy winds and rain. Apparently, multiple hikers had been trapped in the small hut at the peak of the pass due to the weather. That night we went to sleep hoping that the trail would be opened the next morning, lest we have to resort to walking back a few kilometers to the end of the Laugavegur trail in order to raid the “free food” bin once again.

Thankfully, that morning the park wardens informed us that they had reopened the last section of trail. With almost no food left in our bags, we tramped zealously up towards the famous Fimmvörðuháls. This portion of the trail is characterized by multiple beautiful glacier views and large volcanic craters. Unfortunately the first half of the day was incredibly foggy, such that visibility was nearly non-existent and we compared our view to being inside of a ping pong ball. Towards the top part of the pass, the trail beneath our feet transitioned from gravel into snow and at that point, we truly were inside of said ping pong ball. White surrounded us in every direction and we had no idea where we were going. Of course, posts were set up every so often along the trail to guide hikers, but with 50% of them being blown over by the recent storms and the fact that we couldn’t see more than 15 meters in front of us, they were incredibly unhelpful. After following numerous footstep trails through the snow in what was probably circles, a heavier rain came in, clearing the fog enough that we could see the next trail marker ahead of us. The rain continued unrelentingly until we arrived at a tiny, rugged hut about halfway through the pass. We warmed our hands, took lunch there, and steeled ourselves for the home stretch. 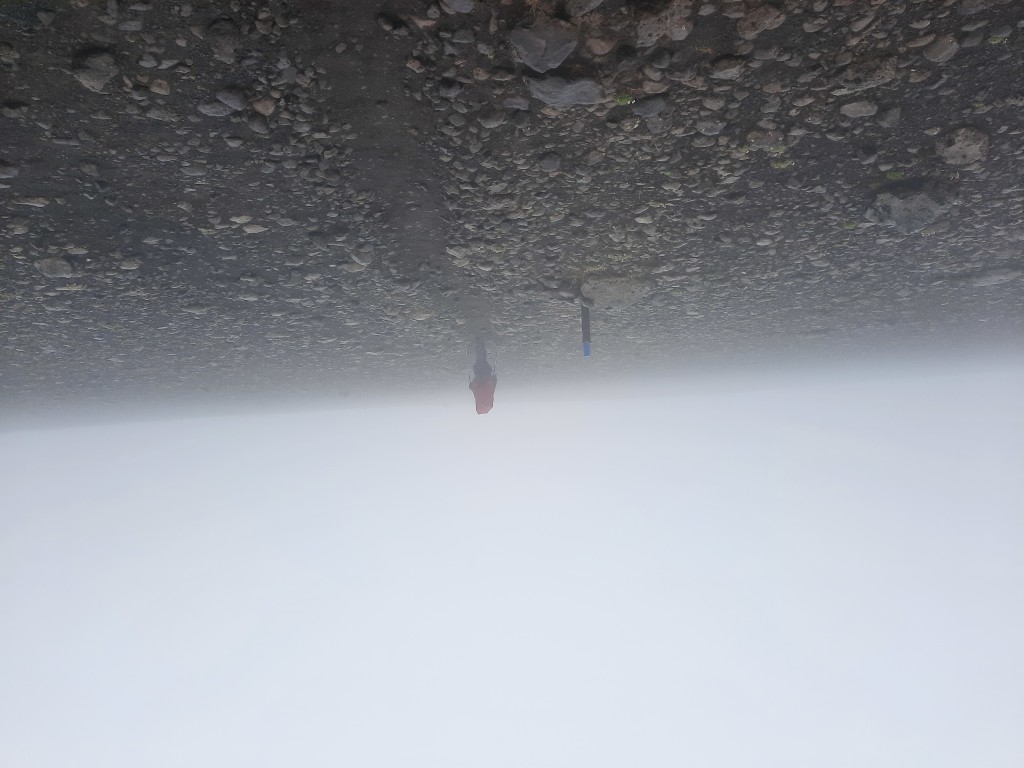 Linda’s over there, we swear.

Soon after leaving the hut, the clouds parted and we got our glacier views! As we descended slowly from the apex towards sea level, we saw literally dozens of waterfalls (somewhere between 30 and 40, we lost count). For the last 8km of the day, we hiked next to a deep, steep river with cliffs high on either side. Birds flew every which way, nesting in the holes bored into the rock by the river and we again remarked how similar the landscape was to that in Avatar. 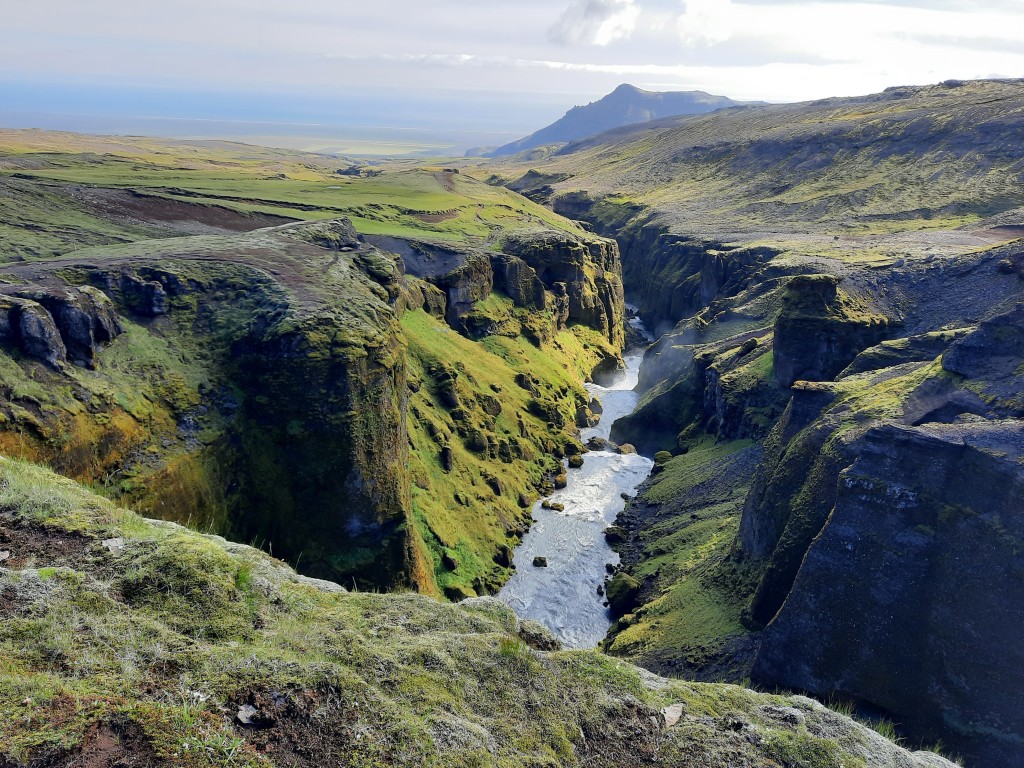 Seriously James Cameron, we know you went to Iceland.

The trail eased up as we got closer to the end. The angle became gentler, the trail flatter and more developed, until we eventually reached the top of Skogafoss – one of Iceland’s tallest waterfalls. After a congratulatory picture and a round-the-world high-five, we sat down to have our very last meal on the trail.

All in all, we hiked 107km, gaining 3580m and losing 3660m of elevation over the span of 7 days. We forded 3 rivers, crossed 2 glaciers, experienced 24hr sunlight, and pilfered countless items from the free food bins. We learned what “wild” means in Europe. We learned how to get along when you’re with the same person 24 hours a day, 7 days straight. Most importantly, we laughed, cried and sweated through another amazing experience, in true VOC fashion. 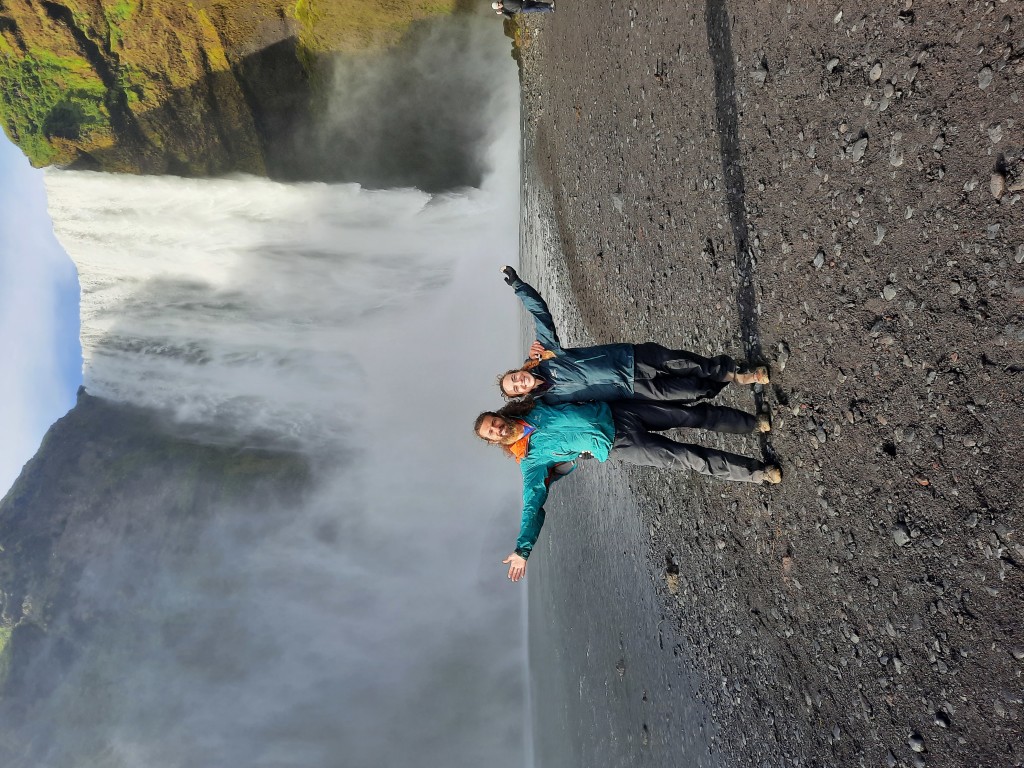 Skogafoss, we made it! 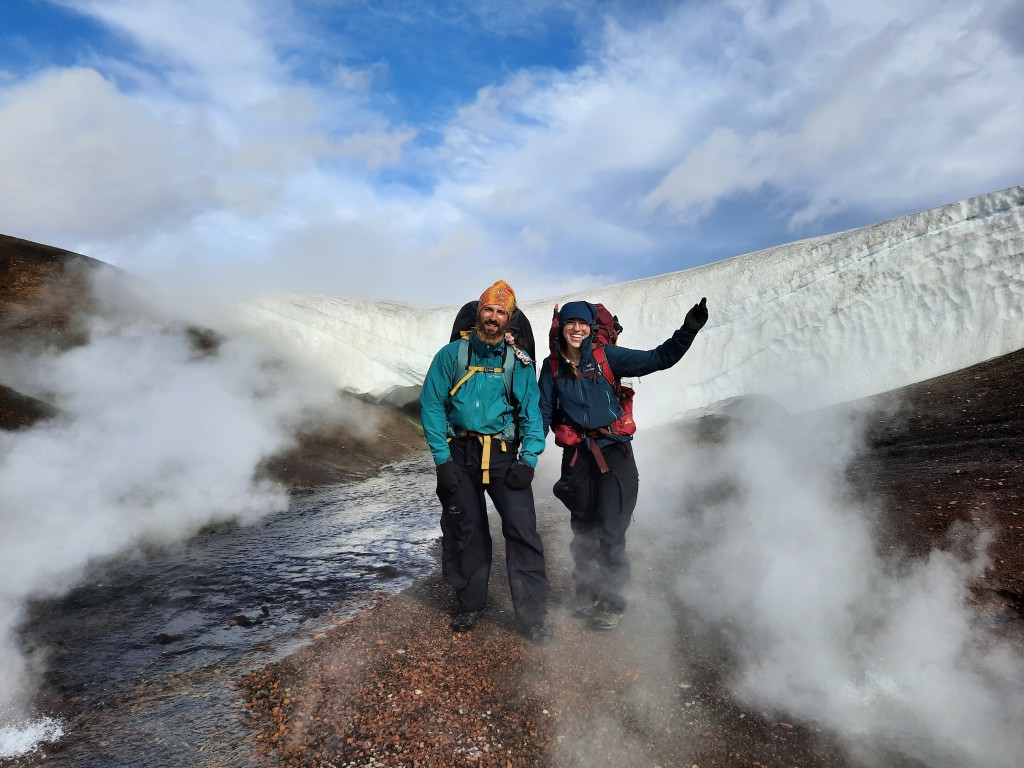 Steam vents we came across: don’t touch the water! We learned the hard way. 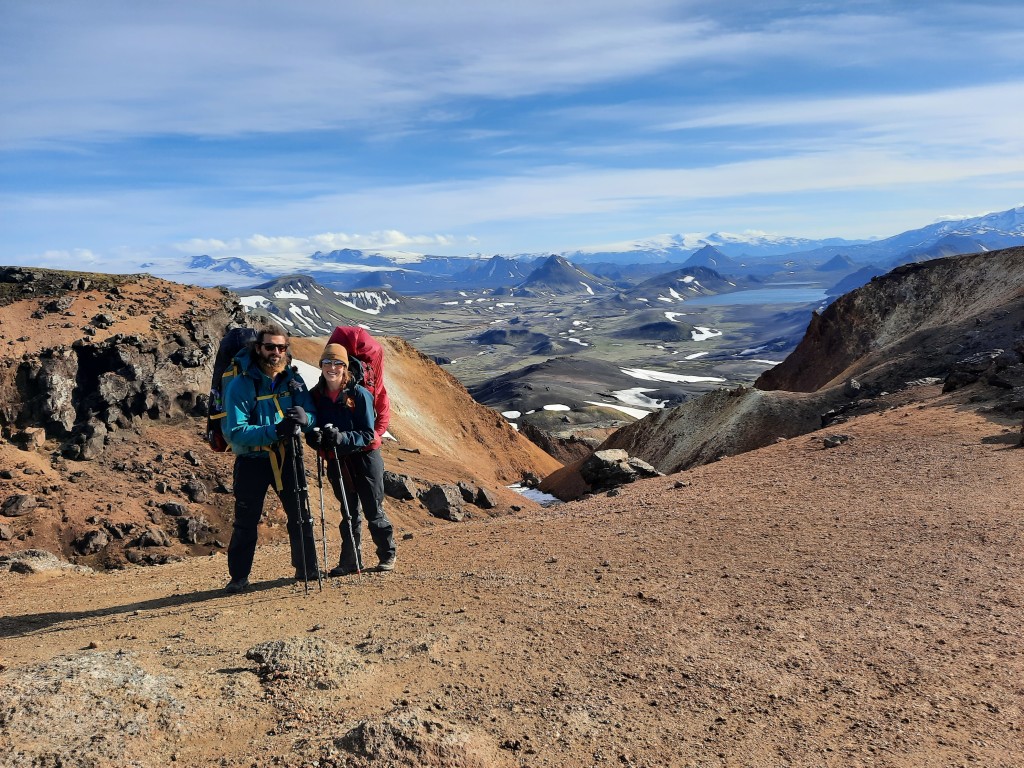 Excellent views as far as the eye can see.

One Response to NMAG Trip: A Through Hike in the Land of the Midnight Sun