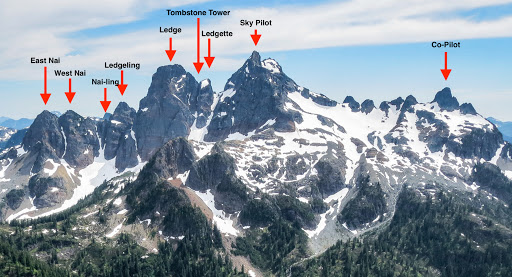 The Sky Pilot Massif with the various peaks and features labeled.

Sky Pilot (PD 4th class/low-5th) is a rising star in BC mountaineering, largely due to the opening of the gondola in 2014 and the influx of ascents made in that year. This has come at a very heavy price: in the first summer the number of ascents of Sky Pilot outnumbered those of the previous decade. Amongst mountaineers and in the climbing literature, Sky Pilot had a reputation as a serious albeit "easy" peak. Combining the mountain's reputation with very easy access and an increase in popularity has lead to 2 tragic deaths on Sky Pilot in 2014. It cannot be emphasized enough that this mountain requires helmet, rope, crampons and ice axes and more importantly the proficiency to use this equipment on glacier and mountain terrain. This is not a hike, and arguably is not even a scramble, but should be treated as an alpine mountaineering objective, involving glacier travel and exposed 4th class climbing

Take highway 99 from Vancouver and before entering Squamish pull out onto the Mamquam River Forest Service Road (2WD). Reset your odometer. Drive 3.8 km until fork and turn right onto Stawamus-Indian FSR. Continue straight until 4.9 km and you will cross the Stawamus River. Park here for low-clearance vehicles. Continue until 5.3 km at road fork and park here with high clearance. Follow the road for 4.5 km, the road forks to the left to reach the valley between SKy Pilot and Habrich. If you reach a bridge over Shannon Creek you are off route. Hike until the road ends at about 1225 m. Past this road there will be a gully which you continue 3/4 of the way up until the trial turns to the right through open forest. Continue on this trial until you reach a large rocky basin below the northwest face of Sky Pilot.

If you have cash to burn you can pay $32 a head and take the gondola up, saving a few hours of hiking.

Cross the Stadium Glacier towards the west ridge of the mountain. Climb the Pink Slab (4th class/low 5th, 50 m) to reach the talus field under gray cliffs. Continue scrambling up the ridge, bypassing the large tower on the south side to reach a chimney gully. On the tower summit, walk the ridge toward a second steep tower and then drop down right and traverse on the exposed south-east side. Continue on this section until you reach a shallow gully which leads into the main gully up to the summit ramp. Descend the same route.

Following the 2014 incidents, rappel rings have been installed above both the Pink Slab and the summit itself. Note, however, that they may or may not still be there when you go up there.

Parties should seriously consider bringing appropriate equipment and having the necessary experience to rappel the challenging and exposed slab on descent. It is also important to understand the less-obvious risks associated with steep snow slopes and glacier crossings, which have to be negotiated before gaining, and after descending from, the West Ridge.

There's some controversy about what grade the climbing part of this route should be. Alpine Select calls it 4th class. Some online sources call it low 5th. No matter the precise grade, this controversy should highlight that the climbing section is involved. Previous rock climbing experience does definitely come in handy. The footholds are good, but not particularly large. The descent is more difficult and more scary than the ascent. If at all unsure about your ability to downclimb, a rope should be used to rappel the pink slab.

The south ridge is the easiest route on Sky Pilot Mountain.

The south ridge route can be approached from Britannia Creek, Sky Pilot Creek or Furry Creek. The best current approach is via Furry Creek and the Wind Lake Trail to the Mountain Lake Hut.

Ascend the basin at the head of sky pilot creek, trending left up the highest ramp. From the col at the top of the ramp, climb 20m up the narrow ridge to reach easier ground (class 3). At this point, the route joins the West Buttress above the Pink Slab. Trend right to find a chimney leading to the top of the first tower (class 3), then bypass the second tower on the right side and climb the gully beyond to reach the summit (class 3).