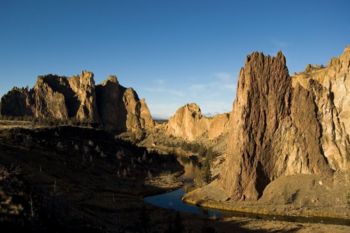 Smith Rock State Park is the premier rockclimbing destination in Central Oregon and is famous worldwide as an early birth place of bolted sport climbing in North America. Climbing is on two primary volcanic rock types. The welded tuff of the main formations provides knobby and pocketed face and irregular crack climbs at all angles and all difficulties. The basalt columns of the upper and lower gorges provide steep splitter cracks and delicate bolted face climbs.

Fall and Spring are prime seasons, winter can be cold and snowy but manageable, summer is formidably hot.

Top-ropeable climbs are limited in number as most formations are more than 1/2 rope length high. However there are numerous quality bolted and traditionally protected climbs at easy grades for the beginner lead climber.

Shortest Way (Google Maps)
The entire drive from Vancouver takes about 10 hours in good conditions (and with short border delays).

Alternate Way (Google Maps)
Depending on road conditions you might want to go through Snoqualmie Pass rather than travel near Mt. Hood. This route theoretically adds about half an hour.

Scott's Variation (Google Maps)
Both of the above options involve traveling through a high mountain pass, so if the weather looks bad (snow in the passes) you could consider a different route. This route theoretically adds about an hour. Though the road still travels through some high elevations south of The Dalles, the area is a desert and receives little precipitation. 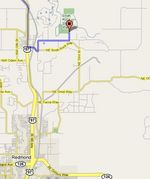 Camp at Skull Hollow/The Grasslands for free. There are pit toilets but few other amenities. There are fire-pits for campfires. No picnic tables or seats, so bring your own lawnchairs etc. There is no water supply at the campground so bring your own jugs to fill from taps in town or at the climbing area. This camping area is about a 10 minute drive from the climbing area.

There is also a walk-in campground right in Smith Rock park (right next to the day-use parking). Although this costs a few bucks, you won't have to do a daily commute to the crags. After you factor in the day-use fee you would have to pay if you camped elsewhere, gas, and wear-and-tear on your car it's probably the cheaper alternative. However, there are no fires allowed at this site, which may make for a chillier night.

There is a small grocery store in Terrebonne (20 minutes away), and a Safeway in Redmond, a little further down the highway.

The climbing area is almost entirely contained within Smith Rock State Park. There is a day-use parking fee at the park ($3US per car) which can only be paid by cash or cheque.

Bring American money and a passport. You will get hosed on the exchange rate if you try to use a debit card. Bring your climbing gear, camping gear (reasonably warm), and a guide book (at least a photo copy). Should talk around to share tents and stoves.