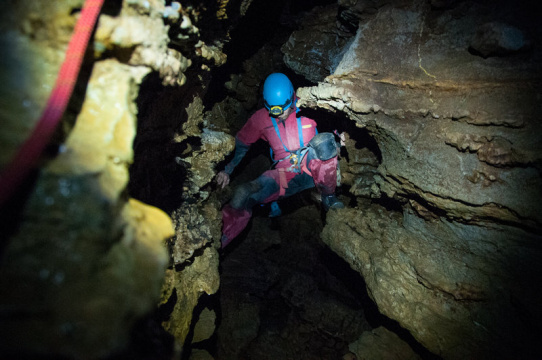 Stemming through a cave passage way at Horne Lake. Photo by Nick Hindley.

The art of fumbling around in the dark, trying out new positions, and exploring passages. You may get dirty, wet, and be left with sore knees by the end of it. A jouissance like no other. That's right, we're talking Caving. 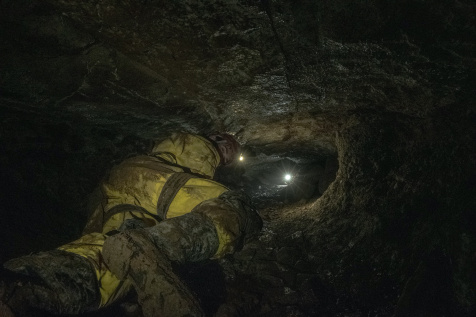 Crawling through the tubes. Photo by Jasmin Tordenro.
There is a huge amount of variability in the cave environment - even within the same cave - ranging from passages of smooth clean limestone, to tight muddy crawls, to large open caverns decorated with crystals. To move through a cave can demand every manner of twists, turns, squeezes, crawls, stems, climbs, slides, and swims, and squirms. An olympiad of mud and innuendo. Caving can be divided into two sub-genres; horizontal and vertical. Horizon caving is anything that does not require a rope and harness. Logistically easier to plan, but may involve more squeezes, crawls, and climbs. Vertical caving, as you may have inferred, involves mandatory rigging, rope descents and ascents, and is much more gear intensive. Both are rad.

There is usually one VOC caving trip per year - if you're interested, keep an eye out for Cousin of Cave (CoC) on the trip agenda. Scroll down to see more CoC!

For the most part, caving still resides in the era of 1960's rock climbing; ie. most of the gear you'll want can be bought at the hardware store for cheap. Fancy equipment does exist of course, but for entry level/ beginner trips like CoC, it's not necessary to spend a bunch of money. $25 at the hardware/ thrift store will improve your caving comfort considerably. 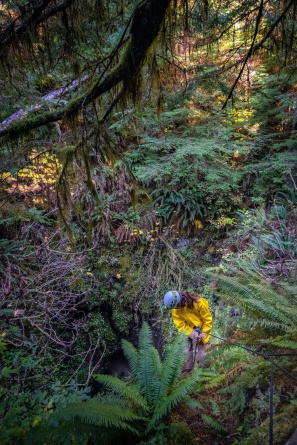 Rapelling into a sinkhole entrance on CoC 2018. Photo by Jasmin Tordenro.

Cave passages can be complex, tight, dirty, deep, long, wide, wet, and everything in between. Vertical passages and pitches are encountered often, demanding roped descent and subsequent re-ascent. Since ropes are almost always re-ascended (so you can get out of the cave), single ropes are left in place on descent by each team then removed once they have been ascended again on the way out. Sometimes squeezes may be encountered on-rope, as well as deviations and rebelays to help navigate vertically through the cave passage and minimize rope wear. Single Rope Technique (SRT) is necessary for ascending and descending ropes in-cave, and primarily involves the following;

The Reading University Caving Club put together a good resource on the basics of a 'textbook' caving setup, as well as some info on deviations and rebelays. RUCC’s Guide to Single Rope Technique

Usually there is an SRT Workshop run once or twice per year in the VOC, which covers the above topics, as well as useful knots, rigging techniques, gear (eg making cowstails), and other fun things like rigging tyrolleans. If you plan on attending CoC, you should either plan on joining the SRT workshop run prior to the caving trip or should be able to demonstrate your ability to the trip leader. 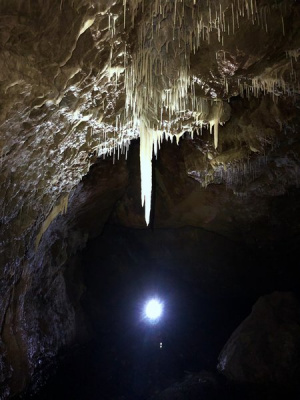 Caves can be incredibly fragile environments. Home to crystal formations such as stalagtites, stalagmites, phallagmites, soda straws, bacon strips, flowstone, popcorn rock, and various other pretties. The crystal formations in BC's limestone caves are generally made of Calcite. As H2O mixes with CO2 in the atmosphere and the soil, it creates a weak carbonic acid. This carbonic acid is able to dissolve the calcium carbonate (limestone), creating a bicarbonate solution which is transported through cracks in the rock until it reaches the cave environment below. When the solution reaches the air of the cave environment, it off-gasses, at which point it can no longer carry the molecules in solution, and they are deposited as calcite. 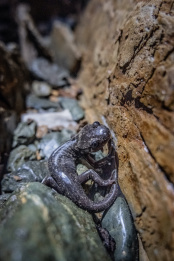 Calcite formations are incredibly slow growing and delicate; generally taking thousands of years to form. Be careful not to damage them! Calcite crystals are easily broken off when bumped with the back of your helmet, etc, halting any potential for future growth. Even touching them lightly can damage the crystals on a molecular level, slowing down future growth. Furthermore, the dirts and oils from our hands can stain them from their natural off-white colour, to a brown or black. It's a good idea to go with someone knowledgeable the first couple times you go caving to point out the fragile stuff, and avoid any damage to the sensitive cave environment.

Without the aid of regular atmospheric and biological factors to help break things down, anything left in the cave will not decompose the same way as it does on the surface. So leave no trace principals must be strictly followed, and it is important to pack out anything that you bring into the cave.

The caves also offer a niche habitat for various species, such as bats, salamanders, hellgrammites, springtails, and other creatures of the night. If you come across bats in a cave, especially during the winter months - don't disturb them! They are resting peacefully and waking them up during torpor can deplete their energy reserves.

There are many caves on Vancouver Island, however for conservation reasons the caving community can often be quite secretive. The best way to get involved in caving on the Island is to reach out to one of the Vancouver Island caving clubs, such as VICEG or the UVCC (UVic students only).

If you'd like a taste of caving in an easily accessible environment, Horne Lake Caves are a good option. There are paid tours offered, as well as some other easy caves that you can poke your head into for free. Other caves on the Island known to the public include Upana Caves, which is quite a long drive from Vancouver - and Artlish Caves Provincial Park, which is a very long drive and quite a bushwhack. 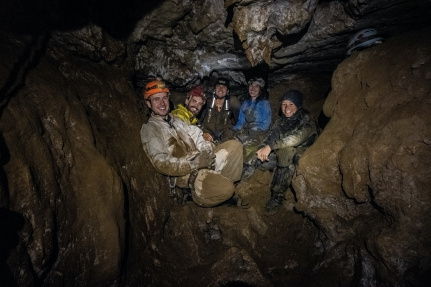 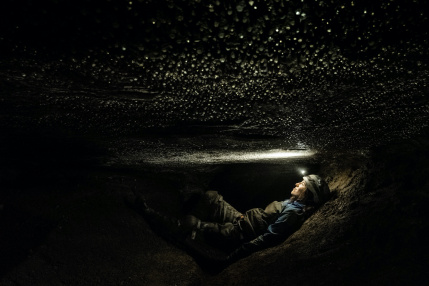 Cousin of Cave is an annual VOC caving trip, hosted by Nick H since 2016. It usually happens in mid to late October, with sign-ups opening in early September. CoC is generally in high demand, so be sure to jump on CoC sign-ups early to increase your chances of getting on. We travel to an undisclosed caving destination on Vancouver Island, usually meeting up with some Island humans out there that will help co-instruct the group with me. The exact destination and itinerary varies from year to year, but is generally as follows:

Friday evening: Leave Vancouver around 5:30 pm. Depart from the mainland on the ~7:30 pm ferry Horseshoe Bay to Nanaimo. BIG drive up Island to a caving destination. Expect to arrive around 2:00 in the morning. Set up car camp along logging road spur, pass out.

Saturday morning: Cook a nice camp breakfast, figure out where we're going. Split into smaller groups and roll out to some caves hopefully before noon.

Saturday day: Long caving trip. Up to 6 or 8 hours in-cave, or potentially a few hours in various different caves.

Sunday morning/ day: Wake up at a reasonable hour, all things considered. Caving round 2. Probably 3 or 4 hour round trip. Return to camp, pack up.

Sunday evening: Hit the road by 4:30 pm latest, get the last ferry out of Nanaimo to Horseshoe Bay. Expect to arrive back in Vancouver around 1 am. It is also reasonable to aim for an earlier ferry so this isn't such a late night, group preference can be discussed. 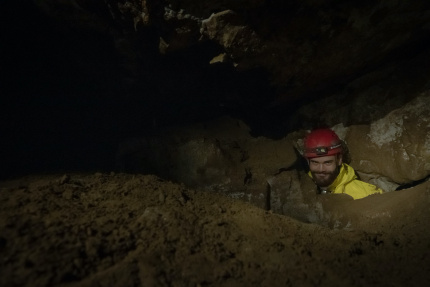 Cousin of Cave 2021 - An Exemplary Group of Swamp Rats
Retrieved from "http://www.ubc-voc.com/mediawiki/index.php?title=Caving&oldid=68829"
Categories: