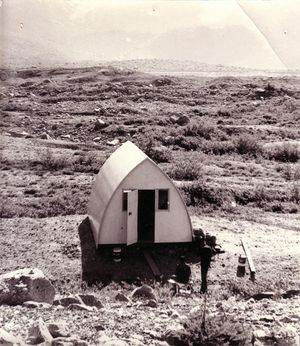 VOC has been going into Garibaldi Park in the spring for as long as anyone can remember. A short search of VOC archives suggests that the first VOC ski trip to Garibaldi was in 1942. Originally these trips stayed at Taylor Creek Cabin, and from about '55 to '65 we used the Airways Cabin. For the past three years, the Parks Branch has not made any winter shelters availble to us, although there are now six Government cabins at the West end of the Lake. Although camping on snow is a beautiful and simple way of life, it puts you very much at the mercy of the weather. Keeping this in mind, we now consider another trip.

Start of an idea

Five of us last January (1969) rode to the top of Whistler lift system with simple ride tickets, and after thawing our feet for an hour at the Round House, took off got Singing Pass, meaning the BCMC Russet Lake Hut (Himmelsbach Hut). That night, as we lay in our sleeping bags in the hut, at eighteen below zero, somebody suggested that VOC build one of these shelters. At Sphinx.

We all got back to Vancouver, and in due course the proposal was put to a VOC General Meeting, and received almost unanimous support. Convincing the Parks Branch, Department of Recreation and Conservation, of the value of our proposal took longer, but by early July (1969) we had their approval. They would fly the hut parts into the Park and would transport us across the Lake to assemble it. Much thanks is due to Alec Deas for handling discussions with the Parks Branch.

BCMS supplied us with plans and their beam laminating jig, and invited us to watch them prefabricate their latest hut in Ladner (Plummer Hut). Glue was bought, and a load of 1 x 4 KD fir, and the first beam was laminated July 7th, 1969. Thereafter, beams rolled off the form in SUB basement at the rate of one every two days (weekends and statutory holidays excepted). A typical weekday noon would find three or seven VOCers somewhat gooey with glue and scraps of newspapers, trying to get the next beam stuck together before the glue set or the lunch hour expired. The final beam was finished August 8th, 1969. At this point most of the crew left for a week's climbing in the Bugaboos.

The week after the Bugaboos, Ken Lefever, in Barb Fulton's dad's truck, spent a lot of time driving around the city and picking up bargains, donations, and deals on cheap lumber, hardware, paint. In the evening the prefabrication was going on, directed bu Barry Narod, with a cast of thousands. By the Thursday night of the same week we had it all prefabricated, assembled on the concrete pad outside SUB, disassemble, and taken back to the SUB basement (cage room), so that we could leave friday noon to climb Rainier.

Monday evening (August 25th, 1969), we loaded the whole lot, including paint, tools, and some food, onto a large Department of Physical Plant truck and five of us took off slowly towards Garibaldi Station. Just before the Second Narrows Bridge a 25-pound can of tools, nails and food fell off the truck and we retrived it. We passed through Squamish about midnight and noted that all the gas stations were closed. About five miles up the road we noted that all the gas stations were closed so we returned to Squamish. We went to the Police Station, they woke up the gas station attendent, he drove to the gas station and sold us some gas (there was a service charge). We continued. Around three a.m. we arrived at the general vicinity of Garibaldi station and started looking for the helicopter landing site. We drove up and down the valley, also back and forth. We tried to remember ever seeing the helicopter up there. We got out of the truck and wandered throught the dewey grass until our shoes were soaked. Finally, we said, "Let's leave it here; the helicopter pilot can find it." We unload the truck, took it back to UBC, and got home at 6 am, in plenty of time to go to work.

For the remainder of that week the weather was too rotten for flying, but by Saturday (the first day of our planned week for assembly) the helicopter arrived. Two VOCers flew in with the first load and helped unload subsequent loads; two of us stayed at the bottom to load; the rest of the crew hiked in and were ferried across the Lake by the Ranger. Many loads of Government supplies had to be flown in first, and it was not until late in the afternoon that the first load of hut materials went in. There was a tense moment when a load of plywood started to rotate under the helicopter and we thought he might have to drop it. When he got back from that load the pilot explained politely the necessity of centering the plywood accurately in the sling. That night, as it got dark before all the material was flown in, we spent in rather unsophisticated Parks Branch cabins. We finished the flying the next day. The last load contained the two people who had been loading the helicopter. They were "treated" to a ride straight up the face of the Barrier and about ten feet away from it (maybe fifteen?).

The final assembly took seven days by an average of seven people per day.

It is hoped that more of these high altitude huts will be built, and that VOC will continue to do its share. (Do you have any suggestions for a site for the next one?)