How to get there

Take Highway 1 east to hope, then highway 5 north. After 30 minutes from the junction between Highway 3 and 5, you will pass through an avalanche tunnel. Approximately 3km from the end of the tunnel, and just before the south face of Yak Peak, take the Zopkios Ridge exit onto a small gravel road. Turn right towards two large gravel sheds. In the past, the trail started just west of the maintenance shed, after crossing a creek. To access the new trailhead, turn right instead of continuing up to the maintenance shed. Follow the gravel road, which parallels the highway, until the landing at the end. It's about a 2 or 2.5 hour drive from Vancouver. Needle Peak is located within the Coquihalla Summit Provincial Park boundary, so open fires are strictly prohibited. 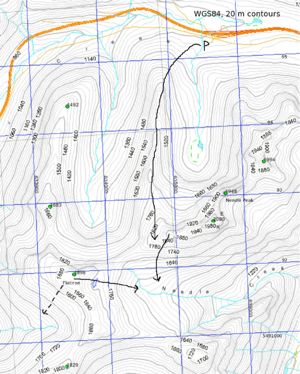 The easiest way to get to the top of Needle Peak is via the West Ridge. At the end of the road, there is a sign which says Needle Peak trail. The trail crosses a creek, and head into the trees following orange markers. Once out of the trees, the trail crests onto a flat bench. Follow the trail south along the sparesly treeded ridge, which leads to a bench and eventually the toe of the west ridge. There is some moderate scrambling here, and routes are possible to the left or right of a large round boulder. Follow an akward left trending crack with slopey holds to easier ground. Continue along the ridge crest for 500m, until the base of the summit pyramid. Follow a ramp right of a large block into a gully. Ascend the gully over boulders to a chimney, which is the crux of the route. There is moderate scrambling here, with little exposure. From the top of the chimney, follow ledges and ramps to the summit. (A short version of Matt Gunn's route description). This is only the easiest route and many variations are possible on the ridge, so go explore and have fun. 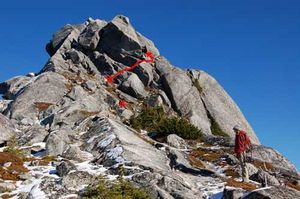 Base of the Summit Pyramid, West Ridge Route‎

Other routes on Needle Peak include the north ridge, which has some 4th class sections.

There it lots of good skiing in the alpine around needle peak, especially to the south in the big bowl between Needle and Flatiron Peak. Flatiron is easily recognizable by the radio repeater antenna on the summit. The approach to the alpine follows the hiking trail more or less. One section of the hiking trail is particularly steep with many tight trees - on skis this is best avoided to the south (climber's right) where there are some more open meadows that make for easier skiing.

Four of us (Richard So, Natalie Stafl, Mahdi Eynian, Andrew McGechaen) piled into Andrew’s car early Saturday morning en route to Needle peak. A prudent stop in Hope for buckwheat pancakes with blueberries (or waffles with whipping cream for those without intolerance to lactose) provided the fuel for an absolutely beautiful day. It was a bit chilly, and as we crossed the tree line, we came across quite the unique ice formation. In a puddle of all places. It really is worth mentioning… After all, how often do you come across a triangular chimney poking out of an otherwise two dimensional block of ice? We lent it a pair of snazzy sunglasses and shot some photos before mercilessly abandoning it to melt in the sun. I always manage to forget just how many mountains there in BC so views on clear days like Saturday never cease to amaze me. A rather friendly retired park ranger listed off a handful of Himalayan animals (aka the names of the surrounding peaks) as we stood on the summit trying to fend off a persistent chipmunk that made repeated attempts at our lunches. Some pretty sweet group shots were taken at arms length after experimenting a bit with the angles. A couple of patches of snow provided the fodder for a perfect October snowball fight. We were even treated to a crash course in Persian (complements of Madhi) on the way down although I believe only Richard actually picked any of it up. A slight detour to some historical tunnels on the drive back was well worth it. Highly recommendable in fact. (With the added bonus of free karma for passing along a parking permit we didn’t pay for). A rusty old bolt and some piton scars traveled up one of the vertical faces preceding the second tunnel. (The marks were questionable though and we spent some time debating whether they were in fact piton scars or just a dam systematic network of spider webs). The ride back to the city was a good opportunity to catch up on some sleep and was punctuated only by the distinctive odor of Chilliwack. All in all a day well spent.