In 1950 an engraved gold watch was presented to Don Manning, the Club Architect for his very outstanding work on the Mt. Seymour cabin.

Another long-tradition skiing race, but oriented for cross-country skiing. The annual VOC Steeplehase race first began in the early 30's near VOC's Grouse Cabin. The race started at "the end of Thunderbird Ridge, go over the peak of Dam, over the peak of Grouse, across the Plateau and down to the "Vee-O-Cee" (Grouse) Cabin"[1] and combined multiple "obstacles" on the way. So long was the race that participants had to bring a sleeping bag!

On a particular note: there's a wild speculation that the origin of the name Thunderbird for the UBC teams came during the 1933 race after some skiers suggested the name[2]. 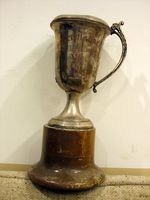 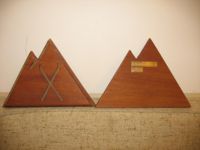 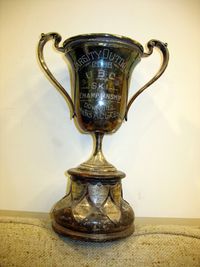 In the spring of 1932, the first annual Dam(n) Downhill alpine classic began on Dam Mountain (beside Grouse). It quickly became the skiing event of the year for the VOC. The race was then held on Mt. Seymour's Unicorn Run, usually in late February, once the club moved to their new cabin on Seymour in the late 40's.

The following winners were obtained from the VOC Journals and/or directly from the trophy. 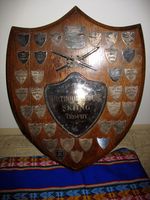