The Waddington cabin (nowhere near Mt. Waddington, by the way) originated with a number of symbiotic ingredients: $2000 that was left over from the Whistler Cabin settlement, a keen 1994-'95 club president (Blair Hammond) with a vision for a new VOC hut, and an offer that couldn't be refused from the Workers Compensation Board of BC (WCB). After input from some coastal mountaineering lords (John Clarke, John Baldwin, etc.) and an informal selection process (which failed to include a summer visit to the site), a forestry permit application for the cabin was submitted. The permit application stipulated a cabin with a wood-burning stove that would be located at the east end of the first of two lakes up the Northwestern-most draw of Phelix Creek.

The Worker's Compensation Board was key to the hut project, and many thanks go out to the staff at WCB and especially Brian Gawley for supplying the hut and keeping faith in the project when it appeared on the verge of collapse (on several occasions). The initial agreement was that the VOC would pay for the transportation of the hut, and the WCB would supply the materials and labor to construct the cabin. The VOC couldn't refuse, with helicopter costs estimated at around $6,000m with a MAXIMUM of $10,000, Even if the cabin went over estimated weight, the club would easily be able to pay the transportation cost.

The hut being build by WCB

Plans were drawn up, a chalet was created on paper, and all appeared to be proceeding smoothly. The hut's weight was estimated (by the VOC, as it turns out) at 6,000 lbs. In early 1997, the hut fattened up somewhat, as the estimate (this time by WCB) was suddently 12,000 lbs. Nevertheless, the club could still afford it. Alas, in the spring of 1997 construction was completed, and the final verdict was a hefty 23,000 lbs. In the words of Dan Perrakis, "the cost of transporting the hut was formidable for a student-run club". The excess weight wouldn't be the only challenge to surface. The WCB was responsible for finishing the hut to "lock up" which meant that they would be working on site in Phelix Creek.So why was this big a big deal? Remember that the WCB is the Worker's Compensation Board, and they are big on safety. The WCB needed to obey their own rules, which included considerable engineering approvals, massive safety requirements, and only paid employees on site. The VOC members were to be excluded from working on the hut until it was more or less complete. Additionally, the hut was to be reconstructed in the backcountry by injured, rehabilitating workers. As a result of these conditions, it was concluded that the only safe way to proceed was to fly the frame in as one solid piece, with two additional bundles coming up later. The frame weight was 12,000 lbs, and only the Skycrane helicopter (with a startup cost of $10,000) could lift this. That meant that the hut was going to cost $18,000-$20,000 just in transportation costs. The VOC budget could not conceive of where to get this amount of money out of the original $6,000 budgeted for the project.

Well, early spring became midsummer, which gave way to early fall. Some funds were found, but well short of $12,000. Under the leadership of Dave Dexter, a route was cleared into the hut site, and the foundation posts were installed late in the fall. Both of these events created more hurdles than would be expected. The VOC and the Ministry of Forests had some problems to work out.

The first problem was that we applied for a hut permit, not a trail-building permit. When confronted with a Ministry officer's question "just how much trail work has been done to date?", the VOC put a stop work order on the trail-building and read the Forest Practice Code guidelines. The wonderfully bureaucratic conclusion we came to was that we required a permit.

Problem number two was in regards to the specific hut location at the site. When Dave Dexter led his merry troupe in to mark the site for the hut, he found the east end of the lake covered in massive boulders. In response to this, the diggers elected to put the foundations at the west end of the lake. This wasn't a problem as far the club was aware. However, forestry had other thoughts. The permit application (which still hadn't been formally issued) stated that the cabin would be at the other side of the lake, and the powers behind the desks were not amused to hear otherwise. The permit was re-scripted and redistributed to the MOE, anthropologists, and whoever else bothers to read these things. In the end, the problem faded into the paperwork, and the permit arrived eight months later, a total of two years after the application was submitted. It is interesing to note that if the application were submitted today (1999), a permit would not be issued as the Squamish Forest District has stopped issuing any permits for this type of project until skier/snowmobile conflicts and other backcountry tensions are resolved.

The following winter will likely stand as the critical time for the cabin. While the structure began to rot (hence, the metal bracket holding one of the corners together in the hut), the project itself was derailed on more than one occasion. In addition to the aforementioned problems with forestry, questions regarding the desirability of huts to the VOC, the dilemma of getting a loan to pay for the hut, and the logic behind spending $20,000 on a public cabin rose frequently. Other options for the hut project were examined.

The idea behind replacing the Slocan Chief Cabin in Kokanee Glacier park was thrown around. It was also heard that the Boy Scouts were interested in taking it off of our hands. Additionally, I was in contact with a group of people at Manning Park who were wondering just how they might get a hold of the cabin. There was (is?) talk about a hut system in the Similkameen River's headwater basins within Manning Park. In the end, the VOC appeared committed to the project, agreeing unanimously to take out a $6,000 loan if needed, and increasing fundraising efforts. By this time, we had already raised Longhike tickets by $10 a head and cut the new gear budget by $2,000 in the name of the new cabin.

By the spring of 1998, thanks to fundraising efforts, a good deal of wizardry by treasurer Joanna Wood, and the premise that a loan could be obtained, the VOC was ready to see the hut installed. Word was out that the Canadian Skycrane Sikorsky-64 was going to be in the Phelix Creek area at the beginning of May and the hut could be flown in on May 10th. There was one problem remaining: the foundation posts were buried under 3 meters of snow. Soon enough I found a solution. Nine keen VOC members would go up and shovel out the foundations during a five-day break during the April exams.

It took one day to find the foundations through probing and test pits. It then took another day and a half to remove 3 meters of snow. As had become the norm with this project, things did not go as planned, and the hut didn't go in on May 10th. The helicopted company wasn't keen on placing the hut in a 3-metre deep hole that only had 20 centimeters to spare on either side. In addition, the bundles that would make up the walls and roof were to be left on the snow for a month or two, which was felt would contribute to an unacceptable amount of rot.

The summer began soon enough and WCB was keen to see this thing leave their work yard. The VOC was also growing tired of "the hut issue". A new idea for flying the hut in was needed. I finally followed up on an issue Roland Burton had raised with me on a few occasions: could a Bell 214 helicopter lift part of the hut? As most suggestions Roland Brings up, this was a good one. We determined that the hut could be lifted one bay at a time and put in place on the foundations.

I spent a good portion of July on a radio phone calling in from work in order to get things organized to put the hut together during the last week of the month. With the WCB officially divorcing itself from the project when the hut left their works yard, the VOC was even able to be involved in the construction. But thankfully, WCB agreed to give four of their employees extra paid holidays to come along and tell us how to assemble the chalet. Roland built the outhouse, table and chairs, and even went and followed my advice and got a wood stove for the hut.

We assembled at Birkenhead Lake Park on Monday, July 27th , 1998 and began to put the hut together. The following week saw many dawn to dusk days during which the hut was moved to the alpine and finished to the weatherproof stage. Four of the WCB staff came up for the first five days and told a small committed contingent of VOC'ers how to put the rest of the jigsaw puzzle together. The only minor problem during the week was the unplanned removal of part of a sketchy roof from one of Birkenhead Park's sheds by the downwash from the big helicopter. Given the previous problems with the cabin, the week went by with an amazing amount of good luck. 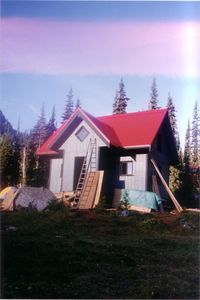 The actual installation of the hut can be pieced together in the hut log book and I will save you from repeating in here. However, the story of the hut's stove shouldn't be left out. The club applied for a Mountain Equipment Co-op Environment Fund grant three times in total. The first two applications were turned down, but each time we were encouraged to re-apply. The third application was successful, and the grant helped cover a much-appreciated portion of the bill; however, it had one condition, which was discovered on Friday three days before the hut was transported to Birkenhead Lake Park. A wood stove would not be permitted in the hut, now or ever. The club needed money and no real plan for keeping the hut stocked with wood. We were committed to not burning local wood, which meant that firewood would have to be flown in at an estimated cost of about $1,000 a year. We agreed to the MEC conditions and took the money. As a consequence, the wood stove travelled as far as Birkenhead lake Park only to return to Vancouver. Two kerosene heaters were used to heat the hut instead.

The cabin was completed at the end of a one-week push in early September and since then has seen lots of use. The kerosene supply that consisted of six 20 L barrels was down to one barrel by the beginning of Spring Break, and the outhouse was full and out of commission. These problems and debates about flagging a winter route and flying in supplies should provide enough fuel for a few executives meetings and other heated conversions. But I think that I am getting use to this, as it seems to be the nature of cabins. So why bother with them in the first place ?