This page is all about wilderness navigation for hiking, mountaineering and ski touring. 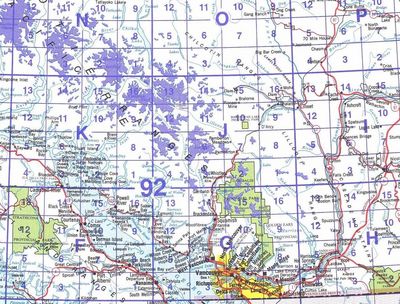 NTS Index Map of SW BC

Most recreationists in Canada use the National Topographic System (NTS) 1:50,000 mapsheet series. These maps are convenient scale that covers a large area but also shows sufficient detail.

NTS maps come in 3 different forms. Usually each map is only available in one form, but sometimes you have a choice

NTS map contour intervals are 100 feet on the old maps, and 40 meters on the new maps. Bold contours are every 500 feet or 200 meters. The metric maps use the NAD83 Datum (same as WGS84) whereas the maps with contours in feet use the older NAD27 Datum. All maps are marked with Lat/Long around the edges and a 1km UTM grid across the entire map.

The data for TRIM maps is freely available online. See the Online mapping page for details.

The earth is essentially a sphere, so it makes sense to measure your position in terms of angles. Latitude is your north-south position. The equator is 0 degrees, the north pole is 90 degrees north and everything else is somewhere in between. Each degree is divided into 60 minutes, and each minute into 60 seconds (written like this: 49 30'45"N). For convenience, a nautical mile is one minute of latitude.

Longitude is your east-west position, measured from some old observatory in Greenwich, England. Longitude is demarkated in the same way as latitude using degrees, minutes and seconds. The distance between two lines of Longitude varies with Latitude, getting smaller and smaller as you move towards the poles. This makes calculating distances between two points based on their Lat/Long coordinates troublesome.

It is always necesary to specify E or W with longitude and N or S with latitude, although in all of North America it is always N and W, so sometimes the N and W are dropped.

Coordinates on the map are given as eastings (x) and northings (y). The UTM easting is roughly the distance from the zone’s central line plus an offset of 500 000 m to keep all the numbers positive. Since the coorinates are given in metres on a flat plane, it is generally easy to calculate the distance and direction between two points. In UTM Zone 10, the central line is at -123 degrees longitude. The northing is roughly the distance along the surface of the Earth from the equator. An offset is also added to the northing for zones in the southern hemisphere. It is important not to forget to specify which zone a UTM coordinate refers to for complete accuracy.

For example consider the coordinate reference GR946718. 6 digital Grid references are always given to the nearest 100 m, you can expand the x coordinate to 94 600. If your map has x values running from 464 000 to 500 000 then you know the full x coordinate is 494 600m. Similarly the y coordinate can be expanded to 71 800 and if the maps y values range from 5 456 000 to 5 483 000 you know that the full y coordinate is 5471800m. NTS maps helpfully truncate the coordinates printed on their map grid, so the first two numbers of the truncated UTM x and y coordinates allow you to easily find the 1 km grid you are interested in and the third number is an estimate to the nearest 100m within that grid.

Maps show three different north arrows and the relationship between them.

A datum consists of a description of the shape of the Earth (usually an ellipsoid with a semi-major and semi-minor axis) and information about how this shape is tied to the Earth. Therefore, with a datum, latitude and longitude have a meaning in 3D space (on the surface of the ellipsoid) that can be then located on the Earth's surface.

For general backcountry travel, it is only important to remember that there is a slight difference between NAD 27 and NAD 83. If you have an old map that uses NAD 27, the coordinates will not match what your GPS displays. You will either have to convert the coordinates to NAD 83, or ask you GPS to display coordinates in the older datum.

If your route travels along a contour line, the route is essentially level. If you cross contour lines you will be traveling either uphill or downhill. The spacing between adjacent contour lines indicates the slope of the hill: lots of lines close together (or missing) indicate a steep slope, while few contour lines spaced far apart indicates a very low slope. You can calculate the percentage slope by counting the number of contour lines, multiplying this number by the contour interval to get the change in elevation (vertical distance) and then dividing by the horizontal distance (and finally multiplying by 100% to convert the number into a percent).

The pattern of contour lines, combined with the location of rivers and lakes, on a map can tell you what the terrain features look like as shown in the following images (pictures stolen from Touch, Wilderness Navigation Handbook).

Fundamentally a compass does one thing – it points North. Once you know what direction North is, you know all the rest of the directions by default. The difference between north and your direction of interest is called your bearing – it’s usually measured in degrees (360 all the way around), and sometimes degrees are divided further into minutes (60’ per degree). Your compass will allow you to ‘save’ a bearing by rotating a dial (containing the meridian lines and the orientation arrow – these line up with north) set within the compass housing relative to the base plate (which you will point in your target direction). There are lots of things you can do with this knowledge, but most require only four fundamental skills (in addition to your own cunning), outlined on the next page. So, I’ve already lied (sort of) – a compass needle does not point North. It points towards Magnetic North. Unfortunately Magnetic North and True North (the geographic North Pole, and usually ‘up’ on maps) are not the same place. Magnetic Declination is the local difference between True North and Magnetic North. Unfortunately you can’t solve this problem by printing a map with Magnetic North at the top, as Magnetic North changes slowly over time (over the course of history the earth has even flipped polarity entirely, but don’t fear – this happens of a timescale of hundreds of thousands of years).

(If you’ve never used a compass before I highly suggest you scan this section, then read the section on the four basic skills, then re-read this section. If it doesn’t make sense on the first scan do not fear.)

If you don’t want to deal with Magnetic Declination you should move to Dryden, Ontario where it is negligible. If you live, say, in Vancouver then, as of August 6, 2009, the local declination is 17˚ 38’ East (17 degrees 38 minutes) – this is a lot, and will put you way off course if you don’t deal with it. For up-to-date declinations in Canada try this website: http://geomag.nrcan.gc.ca/apps/mdcal-eng.php. To add further complexity maps often have their Grid North somewhat different than True North as well. This information will be printed on the map. A declination of 17˚38’ E means that a compass needle will point to the east (right) of True North (as opposed to the other way around). There are a few ways of dealing with this, in order of complexity (obviously only one these methods should be used at a time…):

Taking/Following a bearing in real life

Hold the compass level in front of you at arms length, pointed away from your body. If you have a sighting mirror fold it back so you can see the compass dial in the reflection and look down the sighting notch in the top. Turn your whole body, not just the compass in your hand.

Taking/Following a bearing on a map

Traveling in a straight line

Presumably if you need a compass, you can no longer see your destination. Hopefully however, you have the correct bearing on your compass – either because you took it earlier when you could actually see your destination (before the whiteout, bushwhacking, darkness etc.), or because you have a map and know where you are currently and took your bearing from the map. This means you must now follow this direction, and not get off-course, or your bearing will no longer be useful.

Sometimes you want to know where you are on a map – and with some creativity this is possible. Simply restrict your possible locations, and find the intersection of these possibilities. Good restrictions can come from:

When traveling along a bearing, you might not know when you will arrive at your location, since you likely will not be keeping track of your exact distance traveled. Therefore you should steer towards a catching feature, such as a lake, river, road, etc that you will be unlikely to miss. When you arrive at your catching feature, you should then know where you are on the map.

Often when trying to find a point feature (your car, a hut) along a linear feature (a road, lake shore) you may not know which way to travel once you intersect the linear feature. The car could be to your right or left. In these situations, you can introduce a deliberate offset to your compass bearing. If you add 5 or 10 degrees to your bearing, then when you hit the road you know that the car should be to your left down the road.

Besides using the compass to sight to something, you can also use it to sight backwards to an object. This can be useful if you want to check that you traveled in a straight line (sighting back to the position you were at or along your footprints in the snow). It can also be used to get around an obstacle: sight to an object on your direction of travel (i.e. a tree), move around the obstacle on your path and then take a back bearing to the object from the other side of the obstacle. Once you have moved to a position where the back bearing lines up with the object, then you are back on your original path. On most common orienteering compasses, a back bearing is achieved by lining up the red end of the compass needle with the black end of the orienting arrow (180 degrees off of normal). Be careful, since lining up the north end of the magnetic needle with the south end of the orienting arrow is a common mistake when taking forward bearings.

A Global Positioning System (GPS) is a handy device that uses the distance from three or more satellites of known location to calculate your position on the Earth. In mountainous terrain, 4 satellites are needed to also establish your elevation, otherwise large horizontal error will occur. The functions of a cheap consumer GPS generally include:

With a GPS it is generally possible to find locations (ex. huts) in bad weather and whiteouts (when surrouding references needed for compass navigation cannot be seen). Map and compass skills are still important for situations when the GPS decides to go on strike. GPS's tend not to work well when dense forest or mountains are between you and the GPS satellites. The elevation calculated by a GPS also tends not to be very accurate unless many satellites are available.

While a GPS will tell you where you are in a total whiteout, it does not know the locations of hazards like crevasses or avalanche slopes, which may be difficult to see until it's too late.

If you need topo maps for the US (eg Washington), you could install the Northwest Topo maps:Northwest Topo maps. They are also fee and work with Garmin/mapsource. At the link above you can find the download file and instructions on how to download them.