May Long at Skaha Bluffs

Team Sexy Sunglasses (Christina, Greg, Sabrina and Yvan) packed into the (tentatively-named) Blue Bullet right after work Friday and, longing for dry rock, headed for Skaha.  Sabrina is American and Christina is fresh-off-the-boat from Germany, so naturally the conversation revolved around why Canada is better than those two countries.

The rest of the car was unable to confirm, but apparently Germany has us beat when it comes to booze prices (much lower) and line-ups at restaurants (unheard of).  The US was the clear loser: 1 point for Trader Joe’s and a half-point for some coffee shop in Seattle that’s pretty good. 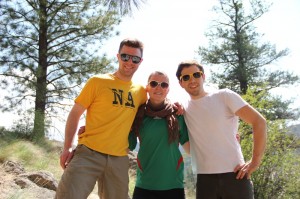 Showing off our sexy shades

We set up camp in our secret ninja campground and fell fast asleep, only to be awakened by the buzzing engine of an ATV.  From our tents, we could hear the ATV sitting idle right by our parked car.  Then the engine turned off, making it sound like the driver was scoping out a break-in.  At this point Yvan and I got out of our tents to kick some ass, but before we could get in view of the car, another car came driving down the logging road.  This seemed to spook the (presumed) douchebag on the ATV, who took off down the road in some haste.  Super sketch.

Awaking after a cold-ish night (“It was the second coldest night of my life” – Christina) we faffed around, narrowly avoided a head-on collision with a moose on the logging road, and then managed to snag the very last parking spot at the crags around 11am.  Despite the crowds, we had two incredible, warm days of high-quality climbing.

Yvan was the superstar, kicking off the day with a smooth lead on “The Raven and the Bear” (10a) in the “Raven’s Castle” area.  Wanting a bigger challenge, he moved on to leading high 10s and 11s, which I was more than happy to haul my sorry ass up on top-rope.  The day ended with a swim and a chili cookout at Skaha beach.  We went to sleep early, vowing to be less lame the next night. 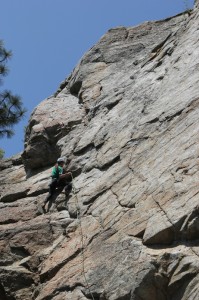 Christina leading "The Raven and The Bear" (10a)

Sunday was even better than Saturday, with cloudy-but-warm weather.  We woke up early to a horrible wail that sounded like a cow falling from an 8-storey building.  While unpleasant, this gave us time to hike to “Claim It All” Wall, where Jeff Taylor and Yvan continued to push the envelope by leading “Press The Flesh” (11a) and “Colours of the Wind” (11a), respectively.  I was feeling pretty good when I was able to grunt my way up “Press the Flesh” and only lean on the rope once.  That feeling quickly evaporated when Christina blew up the same climb in record time, totally smooth with no help from the rope.

“That was SO easy!” - Christina, after schooling me on “Press the Flesh”

The rain started to fall Sunday evening so we stormed the Barley Mill Pub.  We ordered one pitcher of local brew before a valve in their beer room exploded and they stopped serving everything except Canadian and Kokanee.  We quickly bailed on this dire situation and, once again, went to bed early. 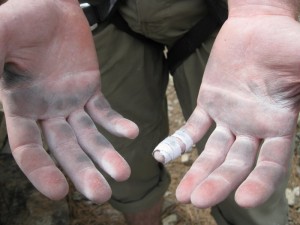 Yvan needs to clean his rope

Monday: Crisis on the Coquihalla

The rain continued to fall on Monday so we spent the morning at Fibonacci Cafe discussing how hardcore we are over organic fair-trade rooibos tea lattes.  We followed that up with some wine tasting at Mission Hill Estate.

I was beginning to enjoy our relaxing trip home when, 50 km South of Merrit, Yvan announced we were “pretty much out of gas.”

We came up with a brilliant plan to gun it for the Coquihalla Summit and then coast in neutral all the way to Hope.  The “fuel empty” light came on right around the summit.

Greg:  “Doesn’t coasting in neutral mess with your steering?”
Yvan:  “No, I think it just makes it harder to brake.”
Greg:  “Oh ok, that makes me feel much better.”

In the end, Yvan managed to coast for about 60% of the way, kicking it back into gear for the flat sections.  We were biting our finger nails the whole way down, but we managed to make it to the first Petro-Can in Hope without incident.
How close were we to actually running out on the highway?  Hard to tell.  The fill-up was about 44 L of gas and the internet tells me that a Mazda 3 has a 55L tank.  However, the “empty” light was on for at least 50 km and fuel guages are notoriously unreliable on hills. Yvan was actually visibly upset that we didn’t run out.  After cranking up 11s all weekend I think he was looking for one last adrenaline rush.
Regardless, we celebrated with Banana Cream Pie and Apple Crumble at Home Restaurant.
This entry was posted in Climb, Trip Reports and tagged bear, boat, Climb, climbing, Coquihalla Summit, dry, fall, hike, Hope, leading, rain, Running, Skaha, Skaha Bluffs, Weekend. Bookmark the permalink.