As plans for the destination of G2 ran through a series of locations, any serious goals were thrown out the window. It was for this reason Lachlan, Neil and I found ourselves hiking up to the Wedgemount lake campsite friday night, packs loaded with technical ice tools, more than enough ice screws, a rack of rock pro and a couple pickets for good measure. Hell we even stopped in Squamish to pick up a few pins. Ok, pins were secondary to samosas but still. We were ready for anything. If nothing else, I would make damn sure to swing my tools at something, be it ice or rock.

We made good time getting to the camp and went to bed early having settled on attempting the NE arete of wedge the following day; A supposed classic of british columbian mountaineering. Our 6am wake up time rolled around and I can’t say I was disappointed when Lachlan informed me that I could continue sleeping due to the unpleasant weather. 11am had us trudging around the lake, with plans once again scrapped and with us simultaneously ready for everything and nothing. Once past the first lake a second comes into view, capped with a stunningly ascetic ice cave formed by the toe of the glacier. Anyone who walks around the corner, sees something like that and isn’t instantly struck with the completely irrational desire to climb it, shouldn’t be allowed to call themselves a climber. The seed was planted. 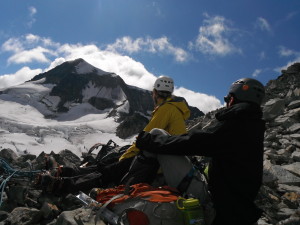 Eventually, on the half-assed pretense of scoping it out, we made our way up the beginning of the alpine ridge that is the NE arete of wedge mountain. De-stoked by the presence of a rock band replacing the snow near the top, we decided it was too late to keep going and that in all likelihood we wouldn’t be bothered to hike all the way back up again the next day. A few crevasse laps killed some time, but the swings were lacking and only left me feeling empty and deeply unsatisfied. The ice cave in the back of my mind only serving to fuel the longing. Surely there was a way. A plan was necessary. 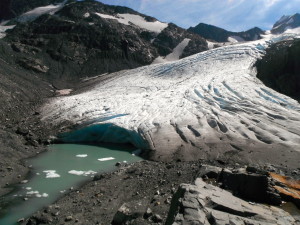 We made our way back to camp making sure to examine the structural integrity of the cave on the way, while also pondering the feasibility and logistics of top roping it. The main issue of which seemed to be getting back on the steeply overhanging wall. Back at camp, after a few cups of tea too many, the stoke was raging and I couldn’t help but tell everyone who would listen that we were going to climb the very feature they were surely dreaming of. There was no way out now. It had to be done.

The next morning I found myself roped up and being lowered over the lip, held by a 4 screw anchor and one half rope. Stoked! “Lower, lower, lower”. I used my tools to keep me close to the wall as I descended, already starting to feel the familiar pump setting in. By now a crowd had gathered on the opposite side of the lake, clearly jealous. “Alright stop!”  My feet half a meter or so above the foggy lake water, beautiful blue ice arching above me. Kick, kick, swing. “Ok, climbing!” Swing, kick, kick, pop, sploosh, gasp. I was in the lake. Not just like my feet dipped or up to my waist, no, I was swimming. Tools in my hands and crampons on my feet. As it turns out half ropes stretch a lot. Now you might have seen that one coming, doubtlessly half the audience had in fact stopped to watch some stupid ice climber go for a swim. Any logical person knows that if you play with fire you’ll get burnt or in this case, if you play on ice above water you’ll get soaked. Here’s the thing, climbing, along with most other adventure sports, can hardly be considered logical and in truth, it wouldn’t be the first time I have found myself fulfilling the role of Guinea pig; testing the unknown lip or line for the greater good. Anyways, back to me in the lake. Apparently, Neil, my belayer, was alerted to my condition by the unmistakable gasp originating from the horde across the lake. However, he could do little else besides attempt to pull any last bit of stretch out of the rope and wonder exactly how wet I was. It was up to me to get out.

I have never had to make a tool placement from the water before. Lets just say its interesting. Especially with an undercut ice face making it necessary to get as high as possible out of the water while swinging. Needless to say, I ripped my pants. At this moment, thrashing around, trying and failing to climb out of the water, a normal person might be thinking something along the lines of “Oh Shit! Oh Shit! Im in the lake! Im in the lake! Get out! Get out!” Instead, the only thing passing though my mind, as my body functioned nearly autonomously, was, “Huh I’d have thought my feet would have been a lot wetter by now.” Once again we come to the conclusion that perhaps I may be somewhat lacking in the normality department. On an aside Nepal Evos are awesome. 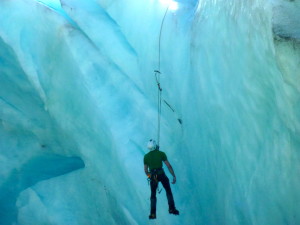 Eventually I managed to get high placements solid enough in the poor ice to pull my self out and get my front points in above the undercut. Pretty much instantly I was pumped. The rope ran up a steep bulge to the right of our intended line and if you have ever tried to climb featureless overhanging glacial ice you’ll know it doesn’t really work. Pulling up on a tool puts an outward force on the ice and your tools pop. Somehow I managed to reach a small shelf in the ice, get some solid placements and work my way high enough that I could fall without ending up back in the drink. Wildly pumped, I hung and shook. A couple attempts following the rope up the bulge and I knew it was not going to happen. To the left was a small corner and a series of diagonal shelves. Following this natural flaw, despite the potential pendulum fall, got me to the top. Soaked, shivering, stoked! “Who’s up next?” 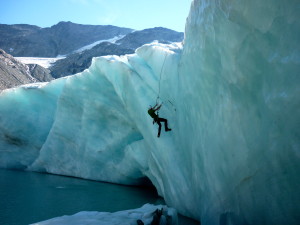 Lachlan and Neil seemed somewhat reluctant, but after adding a directional screw and deciding on only lowering to the shelf which started the corner system about half way down the face, we each ran a couple more laps. Before we knew it, our screws had melted out (note to self: use V-threads next time) and that was that. Amazing climbing. Stemming, torquing, steep but with good placements, up a beautiful line. The only thing lacking was the purity doing the whole thing on lead. It was totally, with out a doubt, worth it. We finished the day of with some dry tooling, making sure to incorporate a piton into the anchor for the sake of completeness. Then it was back to the car and sitting in traffic on the way home, dreaming of the next irresistible line. The next big challenge. 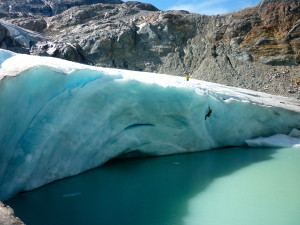 Turns out the next big challenge came sooner than expected and it took a bit of driving in circles for Neil to find where he lives.