This year the Lead Ladder weekend took place on July 2-3 and was again a huge success. On Saturday we practiced gear placements at the Sugarloaf area in Murrin Park and on Sunday we set out in teams of two students and one instructor to do a trad multi-pitch climb. Two of the trip reports from these groups can be found below, while a third trip report will be posted at a later time.

On behalf of all the students I would like to thank Jon for all the time and effort he invested into organizing the Lead Ladder course and teaching us the skills required for multi-pitch, trad climbing. A big thank you also goes out to the instructors, Jeff, Manu, Phil and Omid for volunteering their time and expertise, and to everyone else who helped make this such a successful and fun course.

Something you never, ever want to hear halfway up your first 5.8 trad lead: “You’re off belay”… Me: “I’M WHATTT????!!!!! No no no no I’m not at the anchor yet, I’m just trying to get a piece of gear in!!!!!!”. Lead Ladder 2016 had some heart pumping moments, but all in all, it was an incredible learning experience with inspirational people.

After day one I was as fortunate enough to be paired with Geneviève and Manu. Geneviève was by far the better climber of us two students, and so it was wonderful to watch her climb and let her lead the harder sections. We owe a huge thank you to Manu, who was an incredibly patient and skilled instructor who gave us excellent guidance and made us both feel at ease on the rock. Together we successfully climbed Diedre in just over 5 hours. At the start of the day, Manu speedily led us up Rambles so we could get to Diedre before anyone else and then after climbing Diedre, Manu led Geneviève up Boomstick Crack.

A lovely scramble with one difficult move getting up onto a ledge. Manu belayed both Geneviève and me at the same time which was really cool to see! 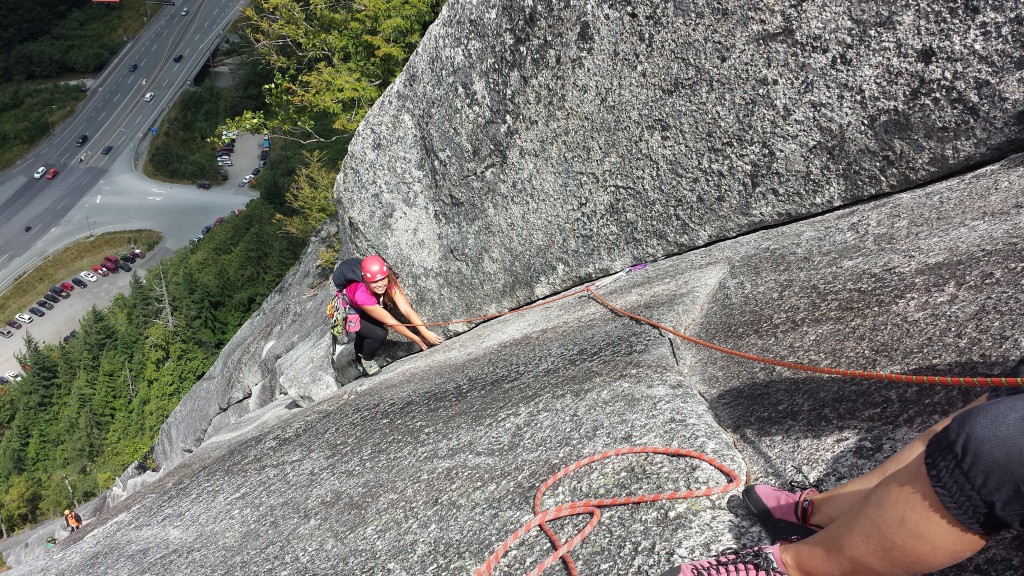 Roseanna on Diedre – photo by Manu

Geneviève confidently led the first pitch of Diedre (5.7), and then I led the 5.6 (which was basically a scramble; I put one cam in for kicks). Geneviève then went on to lead the first 5.8 quickly and with ease. Her gear placement was superbly spaced and placed; she made it look easy! I was so inspired that I thought I’d give the next 5.8 a go. All was going swimmingly (apart from the dialogue I mentioned at the start of this report haha) until I spotted what I “thought” was the anchor. Manu told me that the anchor was to the right, and I saw one that really was to the right; it required a traverse along a tiny micro ledge (rock raised by a few mm), 2-3m from the last gear placement. So after a lot of self-talk that mainly consisted of me telling myself to toughen up, I shoved a few mini-cams in the crack, and started the traverse. Slowly, slowly, I inched my way across, and as soon as I was in arms reach of the anchor, I reached over and clipped my safety in with lightning speed. Phew! I then set up the anchor and belayed Manu up. When he got to my last gear placement, he looked up and said, “Zee anchor is 3 m above you, 2m to zee left”. Ah crap. I’m on the anchor of some hardcore sport route. Damn, damn, damn! This is where the 6ish pitches bit comes in. Manu then climbed across what he described as my “ballsy” traverse, to my anchor. What to do, what to do? “Aha” said Manu “I know vhat ve can do!”. Both Geneviève (who must have been seriously confused by this point) and I belayed him as he led the last 3 metres of the 5.8 and set up the real anchor! We took him off belay and he took both Geneviève and I on belay and we climbed up to meet him. That 2nd 5.8 pitch took as long as the last 3 pitches combined! Oops, my bad!!!! My nerves were shot by this point and so Geneviève led the last two pitches; a seriously strung out 5.6 with minimal protection and the final 5.8, with a nasty move at the end to get up to the belay station in the trees! 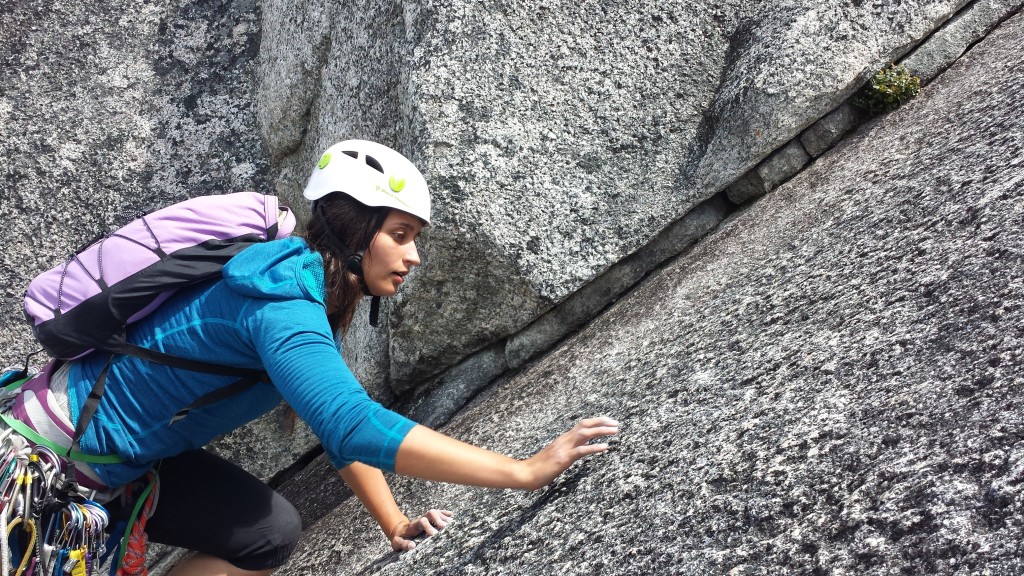 Both Manu and Geneviève seemed to have boundless energy and so opted to do the while I sat and pondered life in an extremely satisfied state. It sounded like it was a nice but very windy, exposed pitch led by Manu which was meant to be two pitches, but they did it in one (coz they’re cool like that). They also had a hairy traverse to get down from the climb, but this time with zero protection.

We then climbed down from the Apron and got back to camp just after 5pm. Perfect! And we didn’t lose any of Manu’s rack! Yipee! It was so great to talk to everyone when they came off their climbs; it sounded like everyone had a wonderful day, pushed themselves, and learnt a lot; AND there were no tears shed! Thanks everyone for the amazing weekend, and special thanks to all the instructors for giving up so much time to teach us! See you all on the rock!

DISCLAIMER: I accidentally signed up for Lead Ladder 2016; I never intended to learn trad as the mere thought of it sent shivers down my spine. I honestly thought this was a sports leading course where I could refine my sports leading skills!! So glad I dived in the deep end and did it anyway!!! 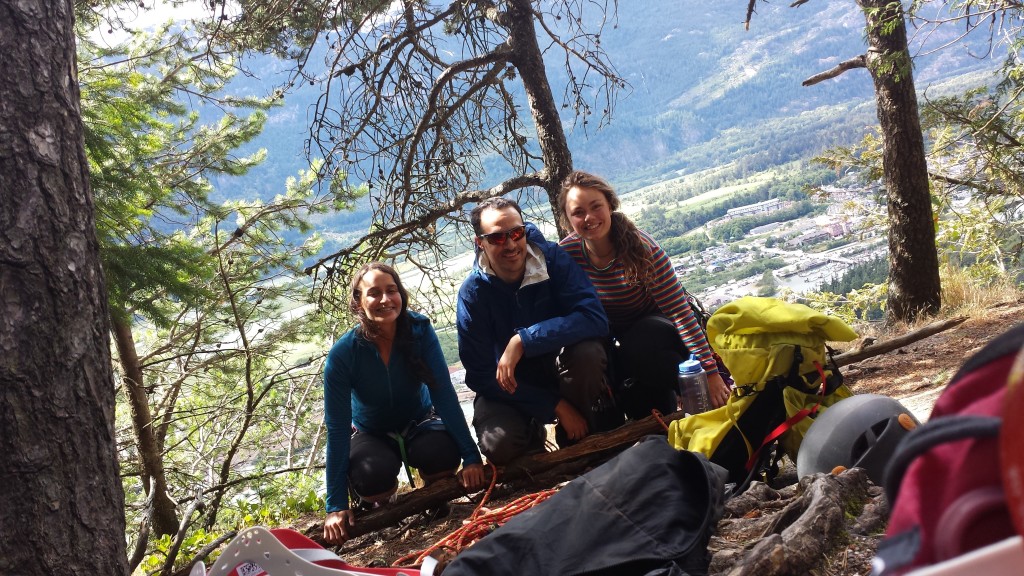 The team after climbing Diedre

After a long and incredibly informative Saturday spent learning all about trad gear and placements with John, and a few easy leads, we felt almost ready to go out and tackle a multi-pitch. In truth I was still not quite comfortable leading, and was still trying to figure out all the optimal placements, and wrap my head around climbing with only little bits of metal I had jammed into the wall as protection. Towards the end of the day John had decided, along with Jeff out wonderful instructor, that may partner Mike and I would be well suited to Calculus crack. With that in mind we set off to camp and make some food.

We awoke to a wonderful sunrise coming in over the mountains, packed quickly, and headed off to begin out climb! Calculus is a well-protected crack running up the apron, with good gear, and patches of good climbing. Allegedly. Somehow during the night before after much rambling and confusion we had convinced ourselves to instead climb another route. Eurpoa, the climb we had chosen, is the exact opposite of what you would want for a first gear lead. While the climbing is not very tough, it is very awkward, full of loose blocks and goofy holds, along with a low angle making any fall on these protruding holds quite dangerous. The rock is loose, the route is not always apparent, and despite having been cleaned there is still a fair amount of vegetation present. The guidebook reminds us that the route is actually a coalition of climbs called “the crap crags”, which any reasonably level head individual would have taken as a warning.

While in line for the washroom before we left, I found myself talking to a girl from California out to climb for the day. I told her that today would be my first trad multi-pitch. She asked which route we were climbing, and not recognizing the name I described what little I knew about it from the guidebook to her. “That sounds terrible” she said. “Not terrible” I said, “adventurous”.

We lost the trail on our way to the base of the climb, and eventually wandered out the trees at the base of the Tantalus wall, which we followed all the way to a little corner, which is the first pitch of the route. I was decided on as the one to lead the first pitch, as I didn’t think I would do so well on the second. I racked up all the gear, and started my way up. As a climbed further I began to realize what loose rock really meant. There were loads of places where I would have loved to place some gear, but which hollow resonations from the rock warned against. Aside from one really good cam, I felt that most of my gear was fairly marginal, a fact that started to get to my head. With more experience I’m now sure that I could have placed better gear, but dealing with loose rock, and trying to find the route after just having learned the basics of placing gear was maybe a little much.

I ended up off-route before the end of the first pitch, but with a little desperate scrambling was able to rejoin the route. At this time it became apparent that my remaining gear, which consisted of some nuts and a few large cams, would not be enough to finish the pitch. Instead a gear anchor was established mid-pitch, and used to bring up Mike and Jeff.

We all decided that this climb was a bit ambitious for a first outing, and, after some frank discussion, opted to abandon ship. Jeff did some rather bold exploring and found a very nice tree that was at just high enough off the ground so that we could use it to rap down with two ropes. This was a valuable learning experience in how many things can go wrong in a single climb, and how to recover safely from these occurrences.

We arrived safely on the ground around 1:30-2:00PM, and elected to use the rest of our time to climb Rambles, a short and easy multi-pitch on the apron. The sun was fully shining around this time, the climbing was fun and non-threatening, and the gear was apparent and solid. It was overall a relaxed and enjoyable outing, the perfect counterpoint to a very tense morning.