Posted on September 21, 2016 by Elliott Skierszkan

Short Summary and Beta: Geneviève Savard and I (Elliott Skierszkan) did a trail run up and down Black Tusk with fantastic weather. The roundtrip took 5 hours. Beta: there is lots of it online, but the jist of it is to be careful to choose the correct ascent chimney for the final scramble up Black Tusk: it is the one absolutely furthest left (northwest) when approaching from the Taylor Meadows side. More importantly, be sure to descend the correct chimney on the way down as it can be a bit confusing up there and the wrong chimneys lead to serious exposure. Bring helmets for loose rock, do it when crowds are low (i.e. early, and mid-week ideally) and only try it if you are comfortable with difficult scrambling and routefinding!

Due to a scheduling conflict, I was unable to make the annual Black Tusk Trail Race Hannah organized last Saturday (expect to see another TR on this topic soon…). Last year I had participated and it was a total BLAST. It also poured rain on Saturday, just like in this year’s version of the trip! However, lovely weather came to the region the week after the official VOC Black Tusk Trail Race, and I figured after too many rainy/foggy hikes this summer, I should make the most of the good weather and go for it.

I posted an announcement on the trip message board seeking partners for a mid-week trail run up Black Tusk, and Geneviève responded. Awesome! In fact, she also had regretted not being part of the Saturday trail race (having been put off by the dismal weather forecast).

We left Vancouver early morning on Sept 21, starting from the trailhead by 6:55 AM. I needed to get back to the city by 3PM for an appointment, hence the early start.

The sun was just rising over the mountains, revealing a blanket of early season snow over the Tantalus Range as we drove along the Sea to Sky. Once on the trail, we grunted our way up, reaching Taylor Meadows in about 1.5 hrs. Regardless of the number of times I have hiked Rubble Creek switchbacks, the vibrant mossy old growth forest there never ceases to bring me wonderment.

When we reached Taylor Meadows and looked up at the Black Tusk, covered in White Snow, we had worries that the apparently loose and exposed scramble to the summit might already be out of season!!

In any case, we pushed on. As we were plodding along towards into the alpine, the distance between Geneviève and I increased a little. As we re-grouped and checked the time (wary of our turn-around time due to my appointment), we decided to run at our own paces towards the summit and hopefully manage to get up before time ran out. 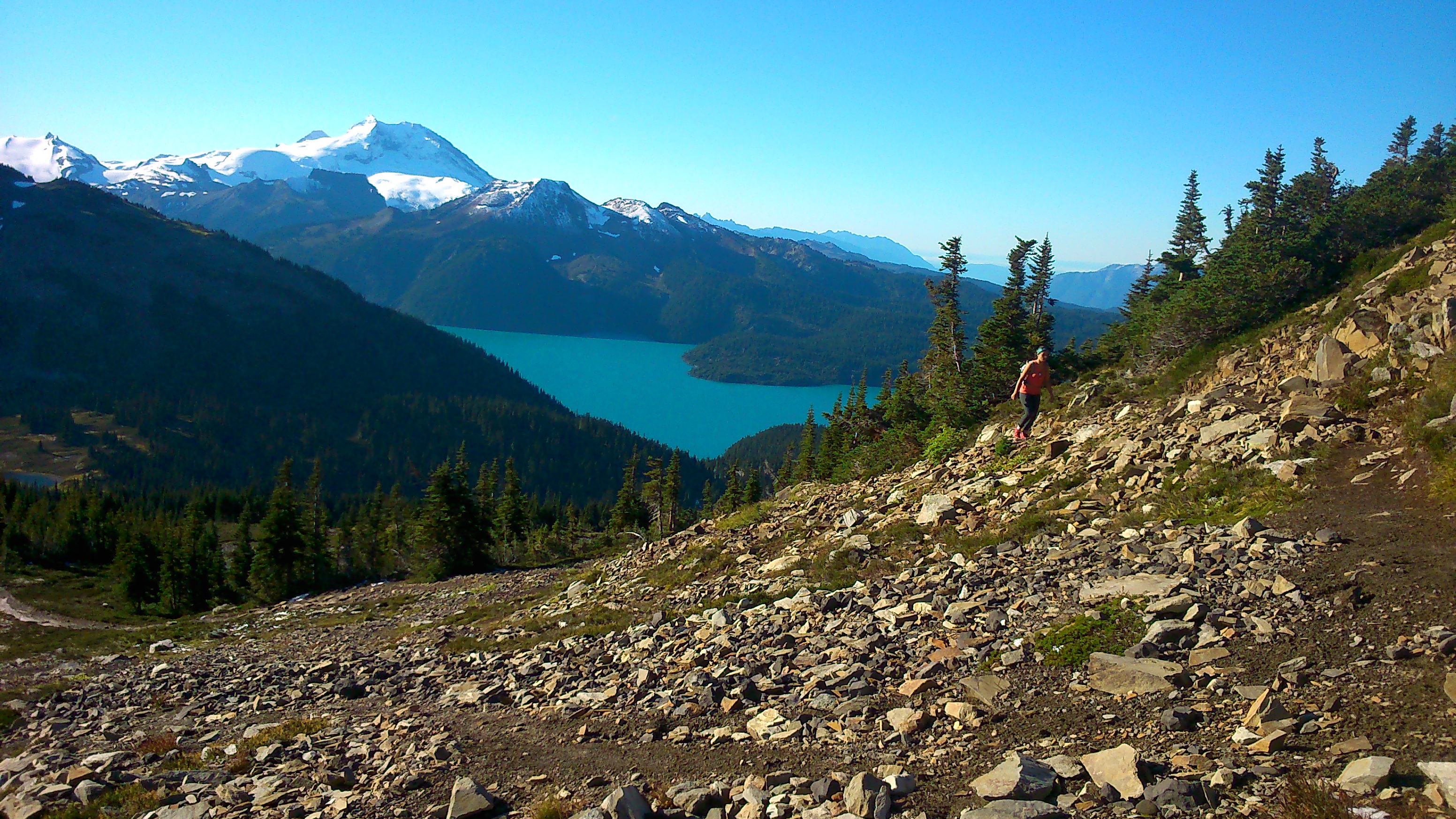 Geneviève running up towards Black Tusk, with Garibaldi Lake behind.
Photo E. Skierszkan.

By 9:30 AM I was at the infamous chimney giving access to the summit, having traversed the scree slope below the summit pinnacle which was covered in a few inches of fresh snow from last weekend’s storms. Peeking in to the chimney, I was quite relieved to find it mostly snow-free, so I donned my hardhat and up I went.

Having read about the chimney a fair bit the day before, I was somewhat apprehensive about the loose rock and exposure.  Actually, the ”difficult” section seemed to go just fine and I did not feel exposed or insecure. All of the holds I tested and weighed seemed much more solid than I had envisioned based on other reports… Perhaps because it was cold and all of the loose rocks were frozen in place. As I plodded along the chimney, things got a little bit icier and snowier and therefore a little bit dicier and spicier, but I felt comfortable and so continued on, eventually topping out and completing the more easier walk to the South summit of the Tusk, which had a dusting of fresh snow covering it up.

I stayed at the summit just long enough to take a couple pictures and then headed back down, because I was keen to find out if Geneviève had decided to go for the summit scramble or not as she was about 30 mins behind me.

Upon safely finding the (correct) descent chimney and downclimbing back to the scree slope, I found Geneviève already on her way down just a few meters away. We stopped briefly to debate whether she had time to try and get up the summit and down, but decided against it as timing was a bit tight for my appointment. In retrospect, it would have been tight but possible …

Instead we rested, at and enjoyed the phenomenal views (Sky Pilot, Wedgemount, Spearhead, Tantalus, Garibaldi, etc) below the summit pinnacle. Every time I am in Garibaldi, I am in absolute awe at the majesty of the place. The fall reds and the blue of the lake and the sprinkle of fresh snow in the alpine made for an absolutely gorgeous sight! I noted that the N. facing snow slopes below the Tusk had ~5 cm of fresh blower powder, and 200-300 ski runs are available for those willing to hike a long way with skis for very early season (late season?) turns.

After this, we began the descent. With the bluebird singing and the awesome colours I think we both felt like we were merrily frolicking rather than trail running down the mountain and enjoying the awesome sight of the snow-clad Tantalus range in front of us. 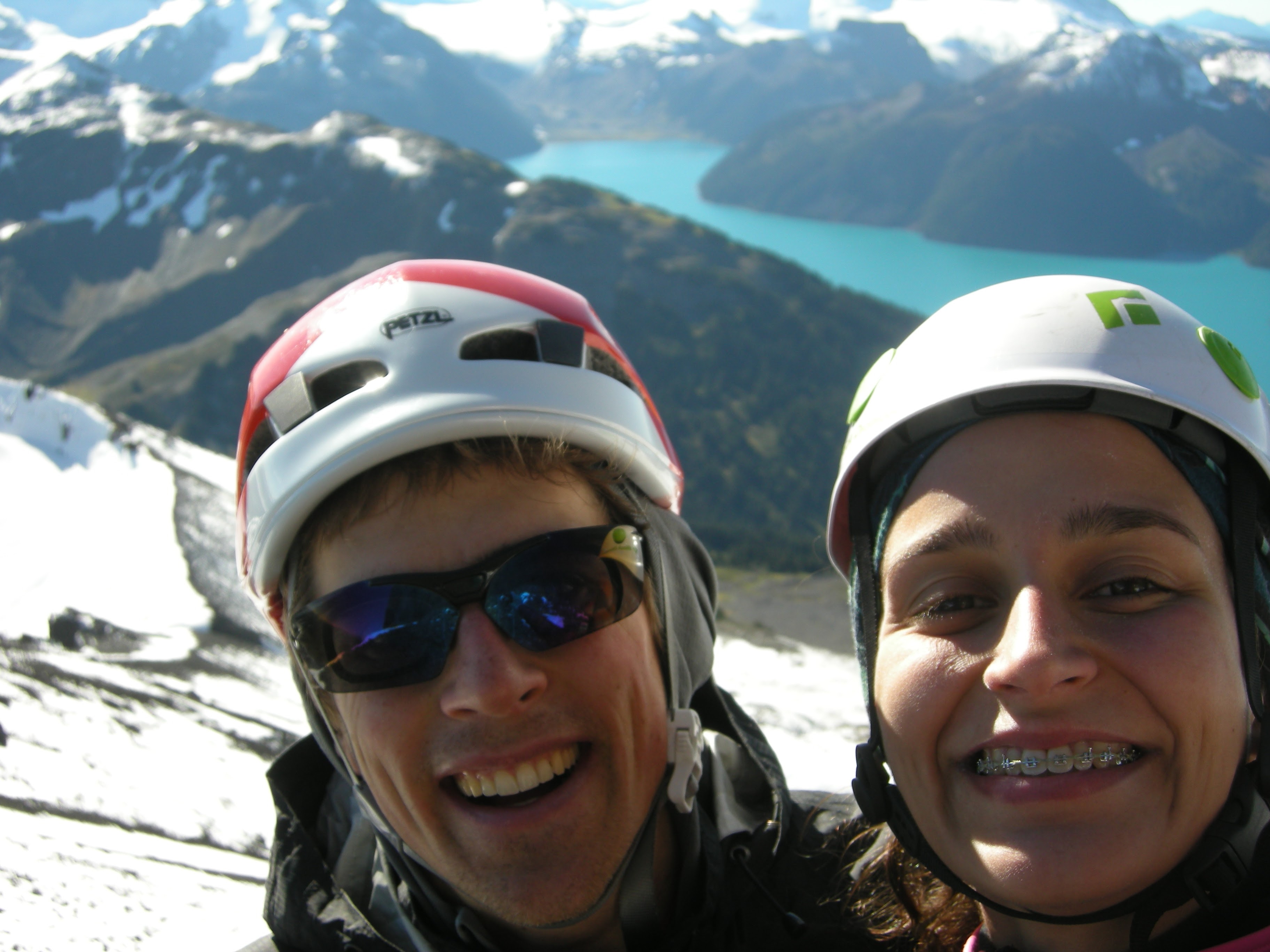 This was an awesome day out!
photo G. Savard

We made a brief stop to chat to the BC Parks Ranger. I wanted to ask him about how to legally ”backcountry” camp in Garibaldi with the new reservation system, which basically limits people to reserving sites at one of the official walk-in campgrounds. He conceded that there was no way to do this at the moment, and that mountaineers and hikers wanting to explore the true backcountry at Garibaldi at the moment basically had to book one of the official sites and just do their own thing in the backcountry. He explained that they were working on some sort of solution, perhaps including a ”zone” where wild camping could be allowed with a permit (that’s what they do, for example, in Banff NP). I also suggested to him that Parks should offer some sort of annual pass for frequent visitors, rather than have frequent users pay $10 each night the want to camp, which ads up if you like Garibaldi Park or are planning a longer trip there. By the way, has the VOC formally engaged with BC Parks on this topic? If not, we should get on that (I would be happy to draft a letter with some opinions and feedback if required).

Other than that, we cruised down the switchbacks, probably passing about 100 hikers or so (on a weekday nonetheless!!) and made it back to the car by 12 PM, completing the 29 km and 1,700 m elev. gain roundtrip in 5 hours (3.15 hrs up, 1.5 hrs down and some breaks in between), and leaving me enough time to have a shower before my 3 PM appointment in the city. Amazing how fast it goes when you are trail running rather than hiking! A highly recommended trip!

Thanks to Geneviève for a great outing and for making the most of absolutely beautiful weather conditions.