Not the Cream of the Stonecrop (Stonecrop Glacier Jan 4, 2017)

There had been almost no snowfall  all year! (since Dec 30, 2016) and Avvy conditions were looking pretty stable. Unfortunately, the alpine winds had been super heavy. Specifically North/ Northwest winds. -> (The concept of wind direction always confuses me, however Google confirms this to mean blowing from the North to the South.)

For the first time in a very long time, I was back attending lectures rather than doing clinical rotations.  I hadn’t called in sick for 1.5 years. I felt that I had earned some “Self Care” time. Anyways, the forecast called for bomber visibility and slightly warmer temperatures (-15 vs -25 at the top). Our only fear was super wind scoured slopes from the 40kmph+ alpine winds.

Nick Gobin and I decided on a ski descent of Stonecrop Glacier on Slalok mountain. John Baldwin lists this descent in his maps as purple (to indicate that it is a steeper descent;  40 degrees plus). Our hope was that because it is north facing, it would be less wind scoured/packed/destroyed than most other steep stuff.  (I’m not convinced that we truly understood the concept of wind direction at the time of trip planning) 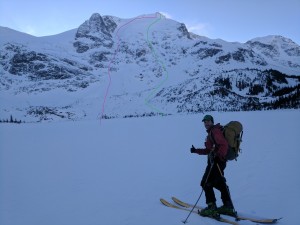 Nick at Upper Joffre lake, en Route to Slalok in the background. At this point, we saw two different potential lines, traced in purple and green.

Anyways, Tuesday night I had a kerfuffle locking my keys in the car. I have now learned the best method of getting my car unlocked ( (1) Put a wedge in the door, 2) slide boxing tape through the driver door to raise the lock button tab.) After slight technical difficulties, I was able to get about 6 hours of sleep before my 4:45 departure.

04:45 I left Vancouver to pick up Gobin. A clean and empty Sea to Sky Highway allowed for expedient travel up to Squamish. We stopped by Timmies and loaded up on breakfast sandwiches, terrible coffee and a lunch for Nick. Soon after, we stopped in Pemberton. Remarkably, gas there is the cheapest I’ve seen in the province. Here, I opted for a second, far superior cup of coffee from McDonalds. There were also funny signs in the convenience store. 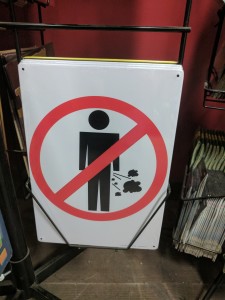 Ahem* (I definitely contemplated buying this for a backcountry hut. It might discourage people from bringing textured vegetable protein)

We arrived at the Joffre trailhead in solitude at 08:10. It looked a lot more tranquil than it does at other times of the year… 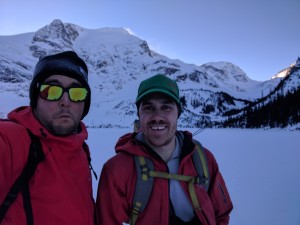 Nick and I stop for our first (of many) selfies.

In my brilliance, I decided to take the summer trail to “Catch up” to Nick, who had left about 5 minutes before me. He took the proper winter trail. After 20 minutes of skinning, I discovered my error and doubled back to relocate Nick.

A little more faffing and we were back on track.

Still keen on the speakers of my new Google Pixel phone, I briefly polluted the air with some Ed Sheeran.

Ed Sheeran “Produced by Avicii” – Not sure how I feel about his latest shift to pop country.

I aqueisced to Gobin’s request to silence my device.  Joffre is about the least remote destination I’ve been to that still doesn’t have cellphone service. I wonder how long it will stay gold. (Incidents like labour day seem to foreshadow busyness to come)

We followed an interesting interpretation of the Joffre lakes winter trail for a ways. Eventually, we decided we could do better and make our own. When we got to the upper lake, we had a good view of our intended line. We scoped it out, then worked on our selfie skills. Nick and Crevasses. Skinning up left of the Matier Glacier.

2/3 of the way up, at 10:50, I found a nice boulder. We hid behind it to shelter ourselves from the wind. Turns out, Nick had forgotten his lunch. Fortunately, I am related to my mother. I usually pack too much food.  I laboured in the wind shadow of our boulder to spread peanut butter in -15 C. We shovelled down our PB and banana sandwiches then donned mitts to complete our ascent. Some boot packing was involved. Steep, Icy  side-hilling is hard without ski crampons. I forgot mine after my new year’s ski trip. Nick didn’t bring any either.

Panorama of Joffre and Matier. Taken along the bootpack up the ridge of Slalok.

At the Col we contemplated Aussie Couloir.  Both Nick and I have still not skied this classic. Nick aptly described why he is in no rush to ski it.  It’s not going anywhere. He could still do it when he is 60. And finally, he could fall down the whole thing and still be okay.. Also, he has hopes for some couloir linkup he calls the “Triple crown.” Menacing clouds kept us from trying to over extend ourselves.

We stuck to the game plan. Slalok, then out.

Our chosen ascent route involved a lot of boot-packing. This gave Nick time to catch up and rest while I patiently kicked many steps. I probably should have taken out my ice axe for this part. By the time I clued in to this, however, I decided that it was safer to continue without it rather than to take it off of my pack in an awkward position.  This is something I often do, so hopefully I clue in next time. Its always easier to get the axe out ahead of time.

The ridgeline up to the summit was very windy. It was the coldest part of our trip. We elected to climb to the very top of Slalok peak and start our ski descent from here. Summit views were pretty. Nick has more selfie coordination than I do. 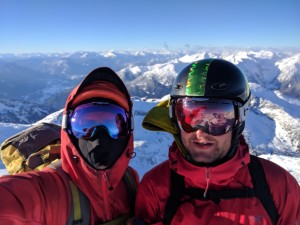 One (of many) Summit Selfies. Needless to say, our fingers were cold. 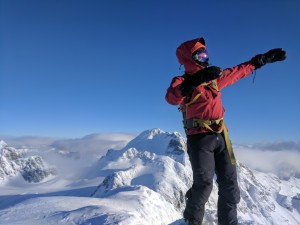 Nick “Cranks that” Soulja Boy on the summit of Slalok. Matier in the background.

We skied from the very top. 3 absolutely terrible turns lead to approximately 257 mostly terrible turns. Conditions were not good. There was plenty of firm wind crust. Some of it breakable, most of it was not.

We opted for the skiers right couloir finish to the Stonecrop which was an aesthetic line. There was some slough to manage in the tight sections. We could safely link about 4 turns before pausing to let the snow slide past us in the narrow chutes. 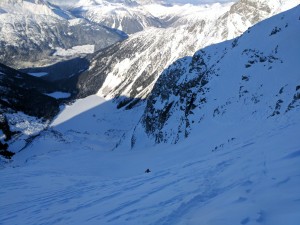 A long way down to the lily pads of the Joffre Lakes. Look closely and you will see 5 pixels representing Nick Gobin’s torso. 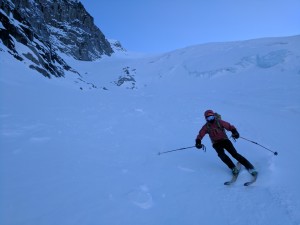 Nick Makes Variable breakable crust look not so bad. Bare Ice of the Stonecrop Glacier in the background. 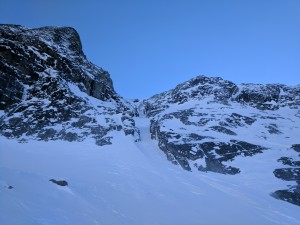 Nice view of the skiers right couloir. About 220 cm wide in the narrow bits. 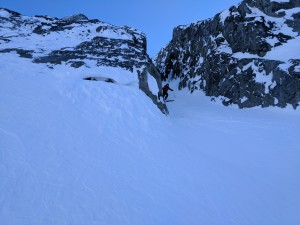 Post Ski Selfie. The line we chose in purple

We got down without incident. The best snow of the trip was through the trees between Upper and Lower Joffre lakes. The bases of my skis got covered in water/ice after crossing Middle Joffre. Fortunately, I packed my GSI pot-scraper*. This nifty device doubles as a ski scraper and made short work of the ice.

We arrived back at the cars at 15:30. ~9hours round trip. Fortunately, this was much better time than if we went at the rate suggested by the Joffre lakes time estimate signs. 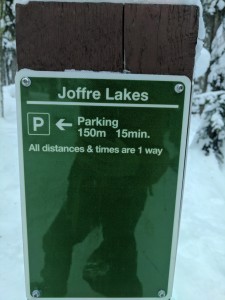 ~60 times slower than Ussain. at this rate, the trip would have taken us > 30 hours.

On the way out, we listened to a bunch of music. Coincidentally, I saw my first ever bobcat run across the duffey lake road. It just so happened, that this occurred while we were listening to the song, “Wildcat” by Ratatat.

Overall, Nick and I had a fun trip. We still have plenty of lines to ski in the Joffre group alone. Next time, I hope we find better snow.

*Disclaimer, I do not receive any endorsements from GSI, although, it would be pretty sweet if I did. Their pot-scraper is basically a glorified spatula without the stick. It is extremely useful.