I was extremely excited to finally do the Neve Traverse! After several months, a few changed dates, and being postponed once or twice, we finally were able to get out and enjoy this classic ski traverse. As the organizer for the trip, I was really unsure of how many people were going to show up for the pretrip meeting after being posted for so long. I guessed that maybe a total 5-6 people would show interest, but ended up getting around 11-12 people that were interested! Due to the group size, the first thing we did at the pretrip meeting was split up into two groups of 5 or 6 people. With the avi conditions + weather conditions, it was found that many people wanted to do Friday – Saturday, instead of Saturday – Sunday. Because a couple people could not go Friday, this was how we decided to break into the two groups. The other big issue we had was vehicles. We seemed to be tight on car spots. Unfortunately, I do not have a roof rack on my car and the back seat only folds down as one unit. Therefore, I can only drive two including myself. I ended up with the group of 6 that wanted to go Friday – Saturday, so we just had enough spots for everyone including Gabe’s car with my two-man situation.

I cannot vouch for the second group and hope they can fill us in on what they ended up getting up to! I hope they can comment bellow, or create another trip report!

For the group that went Friday – Saturday, we had a good start, making it to the Garibaldi Parking lot at 7:00 am. We ran into Nick M, who modestly told us he was going to do the Neve Traverse there and back in one day, what a guy! Our group consisted of 5 guys Mirko, Matthias, Alexandre, Gabe, and Lukas, and 1 girl, myself! After unloading the crew, Gabe and Mirko left to do the car shuttle to the Rubble Creek Parking lot. Mirko kindly offered to shuttle my car so I could get a head start on the skin. Thanks Mirko! I am a little slow and Mirko is a fantastic skinner. We had a chill start, leaving around 7:30 am. We agreed to meet up again as a group at Elfin Lakes with our drivers. The 4 of us got to the Red Heather shelter just after 8:30 am, and the Elfin Lakes shelter just before 11:00 am. It was absolutely clear, sunny, and quiet during this part of the day. Mirko and Gabe arrived at the Elfin Lakes shelter about half and hour after us. Unfortunately Gabe found he was having tendonitis problems and did not want to further aggravate it. We were extremely sad to not have him, but agreed that he should do what was best for him. He chose to stay the night at Elfin Lakes and ski down the next day. He agreed that he would pick up the rest of the group Saturday at the Rubble Creek side when we were finished. While we had a quick lunch break, we discovered that a few of us did not have things we needed, like a harness and some alpine gear, while not needing other items now like a tent. This was the time to sort all that out with Gabe!

The rest of the crew then headed on. I was then the only Canadian left in a group, with members who were Swiss, German, French, and Bulgarian! After some route finding, we made it to Ring Creek, which can be one of the notable problem areas. By this time, it had warmed up quiet significantly! We were not expecting it to be so warm, making the avi-conditions definitely considerable. This can be a problem especially going into more intermediate terrain. We needed to traverse across this run-out area where we could see that several slides had already been triggered, before going down across the creek to the other side. This section of going down to the creek and getting up onto the glacier was definitely the most sketch part of the trip. After we had all crossed one, by one, Alexandre was the last one to cross. About 3 minutes after he crosses the shoot (and some of us skied), a fast wet slide avalanche comes down the mountain! Fortunately everyone was safe in the trees or already at the bottom of the hill. Nonetheless, we were slightly shaken and uncomfortable with the warming conditions for the rest of our day and need to recollect as a group. After some disagreements and agreements between group as to our decision making, we crossed the creek extremely conservatively and made it up onto the glacier. Once we were out of this zone, the skin was mellow across the glacier. Further on in the day, I had started to hit a wall, this was apparent near Mount Garibaldi where we had discussed camping out at the junction with the peak and the trail meet. The plan was to do Garibaldi in the morning, so the guys decided to camp further up near the peak. That night, we all enjoyed various forms of pasta, fresh, and dehydrated, while enjoying the panoramic view. Unfortunately before bed, I found myself having a bad case of diarrhea. I would go to the bathroom, then 2 minutes later, be like ‘shit…’ no pun intended, and need to go again. This was the unpleasant part of the trip for me after going to the bathroom like 4-5 times. I generally do not like to leave such trace, but I was kinda desperate. I was already dehydrated, not wanting to lose more water, and really wanted to go to bed. I ended up just laying down, hoping things would settle, which worked. 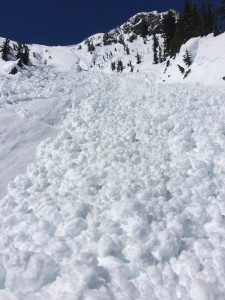 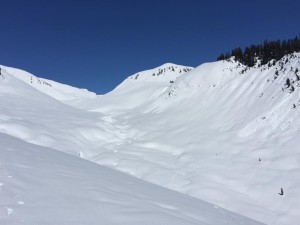 The next day, 3 of the guys got up at 4:30 am with all their alpine gear headed up to Mount Garibaldi at 5:00 am. While I was indecisive about my decision to not go, in the end, I won’t complain because I did get my best sleep for the night between 5:00 am – 7:00 am. The guys got down around 7:30 am. The summit photos looked spectacular, I was pretty jealous. I was told that Lukas triggered a small avalanche/ sluff on the ski down. The consensus was that it was an icy wind-loaded steep slope which moved due to the weight. Once everyone was safely down from the peak bagging, we all got packed and were ready to keep moving. Fortunately, it was mainly downhill to the lake from there. We were a pretty fast skiing group, and made it down pretty quickly. Unfortunately, the snow itself was extremely hard and icy, but we still enjoyed the ride down nonetheless. The lake was long, flat, and uneventful. Past the lake, things were starting to cloud over and the way down was starting to turn to rain. We quickly moved down the switchbacks and made it back to our cars at about 2:00 pm where we were able to meet up with Gabe again! It sounded like he had a chill weekend, and was able to make some new friends. We were wet and tired, so decided to finish off our trip with some Mag’s! 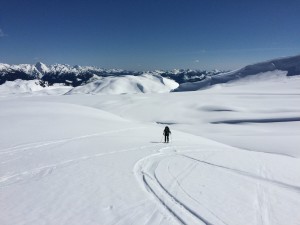 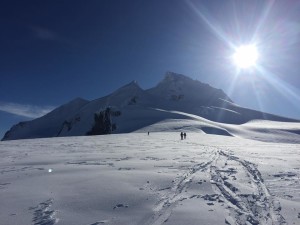 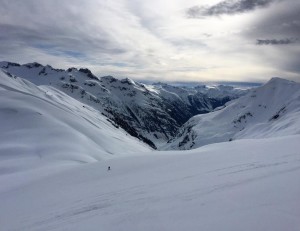 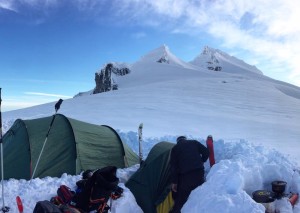 I know that this trip was called the ‘Tweed-Clad Old Skool Traverse,’ but Il be honest and say no tweed happened. I wanted to get to Value Village before the weekend but unfortunately didn’t have time to Thursday. I hope to hold a Centennial trip in the Summer so maybe I can do a better job of convincing everyone to dress up next time.

I wanted to thank the European ski crew for my first experience at Mag’s and being patient with me during the traverse! Hope to see everyone out again in the near future!