Posted on November 14, 2017 by Martin Carnogursky

This was a short workhike on the weekend of Nov 11, 2017. Our crew was Jodie Nowell, Tom Curran, Cassandra Elphinstone, Fabian Frank, and myself (Martin Carnogursky). We drove up early on Saturday morning. The road had patchy snow starting at the turnoff at the Birkenhead park gate. We were expecting a lot of deadfall, but someone had been through with a chainsaw and cleared all the deadfall before the first vehicle bridge. We think it was sledders because the cutting stopped at the turnoff before the third vehicle bridge, and some cutting continued on their turnoff.

We drove to the 4WD parking lot and made a plan of attack. Jodie and Tom proceeded up the trail to take care of any leaning trees and annoying brush. Fabian, Cassandra, and I drove down to the last vehicle bridge (the one just after the sledders turnoff). Fabian walked ahead to saw the larger alder while Cassandra and I fired up the two brush saws. Unfortunately, the VOC saw had a crack in the fuel tank, and our duct tape fix couldn’t prevent fuel leakage. So, I continued sawing the small alder with my brush saw while Cassandra got the larger diameter alder with the loppers. We cut our way down the road and spent the day making our away to the slide path that avalanched last year. The road was widened by ~5 feet on each side. We found the most efficient way to clear this section was to have a brush saw clear away all the <1″ diameter alder, then someone with loppers cut the larger brush, and one person would pick up the carnage. We also cleared several other sections between the first bridge and the mentioned slide path.

Overall, I’d say the section between the two vehicle bridges is done. There are a few patches where the alder goes up against your car, but it’s only on one side and in the winter it won’t lean much because it’s short.

On our way down, we encountered a couple that had driven a bit too far off the edge: 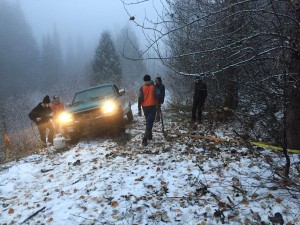 We spent some time getting them back on the road and turned around, and it was dark by the time we finished.

On our way down, we sawed as many problem trees as we could, but unfortunately didn’t brush out the sides. There should be a lot less blockage once the snow comes now that the leaning trees are gone. The section between the washout and the first bridge needs maybe two days of a 1 brush saw + 3 loppers + 3 picker-uppers + 2 bow sawers crew to clear out the brush, but it’s not nearly as bad as the section we cleared.
In this part, there are larger confiner saplings mixed in with the brush. I think that if the alder is taken out, not a whole lot will grow back.

With all the precipitation in the forecast, we didn’t want to suffer through a second day of clearing, so we went down to Tsek Hotsprings to warm our bones.

Thanks to the sledders, or whoever they were, for the work you did ahead of us! Thanks to my fellow alder-slashers for helping make the ski out better! +8 Gnar points for everyone!

Now all we need is a few good dumps to convince the mountain sharks to enter their hibernation.