Philippe LeBillon, Lukas Schreiber and Alex Wharton kayaked from Jericho to Squamish at the end of August to begin the end of what had been a fun filled VOC summer. Similar to the previous two summers in Vancouver, smoke from forest fires had smothered the city for several days in August, and up to several days before the trip we were worried that we were going to have to cancel our trip. It would have been quite dangerous to paddle in limited visibility, and plus once smoke gets in your lungs, the particles apparently never get out! Another source of concern was the potential for rough conditions in Howe Sound, as sadly over the years there have been fatalities in Howe Sound when kayakers have been caught in rough conditions. Our plan should the wind become too strong and the water too rough to continue kayaking safely was to hug the east coast of Howe Sound after we passed Anvil Island, and that thus we could abandon our trip and take refuge near the Sea to Sky highway should conditions become dangerous.

Philippe, Lukas and I departed Jericho early on a cloudy morning at the end of August. Amid light, intermittent rain we began our journey across Burrard Inlet towards Point Atkinson. Several weeks ago Alex and another group of VOCers had paddled from Jericho to Gambier Island, and the water had been quite rough around Point Atkinson on that trip. This time the water surrounding Point Atkinson wasn’t rough, and we were met by a group of seals just beyond Point Atkinson. Thankfully no freighters were leaving Vancouver harbour as we were crossing Burrard Inlet, but we had our VHF radios tuned to the marine transportation channel just in case. After Point Atkinson we continued on towards Bowen Island and then Gambier Island. Between Point Atkinson and Gambier Island instead of having to be sure to avoid freighters, we had to contend with BC ferries going to and from Horseshoe Bay. Although we encountered several ferries, we were sure to stay well clear of their paths. We stopped for lunch on the northern tip of Bowen Island. 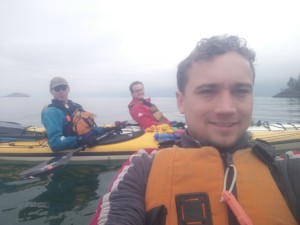 Philippe, Lukas and Alex pose for a selfie

Next we continued along the coast of Gambier Island towards Alvin Island. The marine weather forecast had predicted that the wind in Howe Sound during our trip was going to reach twenty knots, so we were a little worried that the conditions in Howe Sound would be too rough for kayaking. But, surprisingly, the water was almost perfectly calm. After Gambier Island we continued on to Anvil Island, and as we approached the harbour on Alvin Island, a woman was sure to remind us that Anvil Island is private property and that we weren’t allowed to get out of our kayaks and walk on the island.

Originally we had planned to camp at Thornbrough Channel campsite at McNab Creek (a campsite on the Sunshine Coast just north of Gambier Island), but as we approached the campsite, we realised that it was still quite early in the day, and we decided to continue on. As we reached the northern half of Howe Sound we were a little worried that strong winds would make kayaking too dangerous to continue, but contrary to the weather prediction, the wind continued to be dormant and the water continued to be calm. Eventually we reached Zorro Bay campsite and decided that we were getting tired and elected to end our paddling for the day. At the campsite we were greeted by a family who lived in Squamish who was spending a few days camping at Zorro Bay. The dad told us that he was once kayaking in the Saint Lawrence River and saw a blue whale from his kayak! We thought that seeing a blue whale from a kayak would be very scary, and we were very glad that a blue whale in Howe Sound would be extremely unusual. There was a decrypt cabin at the campsite that looked long abandoned. I was a little worried about the rain that was forecast for the night, because this was the first time I was going to be sleeping in my hammock in the rain. I set up a tarp above my hammock and thankfully stayed very dry throughout the night.

The next morning Lukas supplemented our breakfasts with fried eggs, something that I had become quite used to from my previous trips with him that summer. After breakfast we left our campsite and continued our journey to Squamish. For the first time on our trip the water became a little rough as we approached Woodfibre (Ilya, if you read this, you’ll be very jealous that we got to Woodfibre – something that you tried to do several times on a mountain bike), although the conditions weren’t close to being dangerous and kayaking in rough water for a while was in fact quite fun. Just as when we were at Anvil Island the day before, at Woodfibre someone was sure to tell us that we weren’t allowed to get out of our kayaks and explore the plant.

Soon after Woodfibre we contacted my parents to arrange for them to begin their drive from Vancouver to collect us and our kayaks in Squamish (my parents are really great about these kinds of things!). We enjoyed some beautiful views of the Chief as we approached Squamish, and seeing the Chief made another idea pop into my head; I thought that it would be fun sometime to kayak to Squamish in a day and then to climb the Chief the next day! I doubt that that will ever happen, but something that I am very interested in doing now is to kayak all the way to Squamish and then back to Jericho over a weekend. I think I’ll have to wait until June, when the days are longest, though to post that trip! 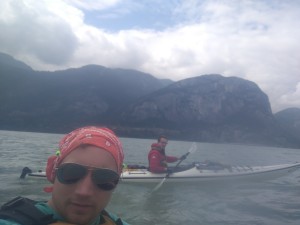 Lukas and Alex in front of the Chief

Overall this trip was a very fun one, and there are certainly more fun kayaking adventures to come!

This entry was posted in Paddle, Trip Reports and tagged kayaking, overnight, Squamish. Bookmark the permalink.

One Response to Jericho to Squamish Kayaking Trip