Mostly written by my cousin and workhike participant Teagan Dawson (a non-VOC member…gasp), with posting and contributions from me (Declan).

As a newcomer to the VOC, this workhike up the old Mt Brew trail was eye opening in a number of ways. Cassandra organized this workhike to find and work on an alternate trail to Brew Hut — but I came for another reason: procrastinating on all the work I had left back at home. As it was, the hike was not only a great way to procrastinate, but also a great way to meet some awesome UBC folks, see some stunning views around Brew Hut, and learn some VOC vocabulary and customs.

Haley Foladare, Declan Taylor, Erica Haugland, and I (Teagan Dawson) left North Vancouver a little after 8am, and made it to the Brew FSR in good time (accounting for a stop to meet up with Tom Curran and Cassandra Elphinstone at Tim Hortons in Squamish). Reaching a bridge on the decommissioned road, we noted the absence of an intact road way (sketchy rotting wood instead) but the presence of some very sturdy support beneath (Tom: “check out those I-beams!”). While we felt good about the bridge holding up under the weight of the car, we decided not to on the grounds it would be too embarrassing if anything went wrong. We donned our packs and started up the logging road.

The weather outperformed the dreary November forecast, and the warmth and sun put us all in good spirits as we headed up into the forest. As this was a work-hike, we paid special attention to any and all details – whether that be a tree lacking a marker, a log in need of a good saw, or a twig just begging to be lopped. It was here that I learned my first VOC word: faff. As I was to discover, there would be many chances to experience faffing first-hand. 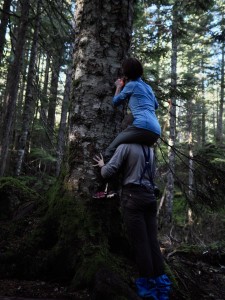 Declan and Teagan getting a trail marker up to viewing height (faff). Photo Cred: Erica Haugland

After giving the trail a good sprucing up, we stopped on a beautiful mossy outcropping to take in the views and the gorp. We learned the trail was not so disused as we thought; here the first of several hikers passed us heading up to Brew Lake. Perhaps to be helpful VOCers, or perhaps to assert our dominance, we removed a large log that was blocking the trail, in an impressive feat of sawing from Tom and Declan, and some heartwarming teamwork to swing the log off the trail.

It was then that we determined that there was around two hours of daylight left, but several more hours of hiking to reach the hut. We resolved to pick up our pace as we came to the first major boulder field. Eventually, with the sun setting, we reached the alpine. It was here that we found that our faffing about had given us an unexpected gift.Dusk fell as we navigated around Brew Lake; a giant golden moon began to rise. 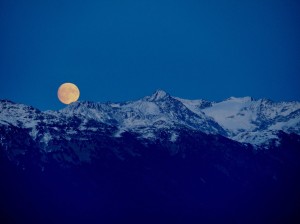 Erica and Declan whipped out the ol’ picture-takers (fancy DSLRs), while I mustered the energy to keep on the uphill trek under the moonlight. Those of us who had elected to bring snowshoes (Declan and Cassandra) sped across the snow, while the rest of us became intimate with a non-VOC-specific word: postholing. 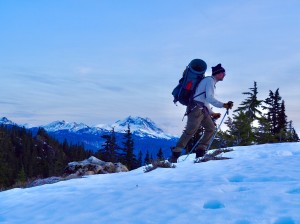 We made it to the hut just as I was considering getting out my headlamp, and were greeted with a bright, warm, jam-packed room. There were 18 at the hut that night, so several of us decided to sleep outside; I was especially impressed by Haley bivvy-ing in a summer bag.

As I didn’t sleep outside, I was awoken around 7am by approximately one thousand people leaving the loft. Before we could start our hike back down, however, there were several things that needed to be done, including Declan and Cassandra racing up to Brew Peak, and a survey of the Shit-O-Matic outhouse. I had been briefed on the Shit-O-Matic the day before, but as I was not a true VOCer I mournfully left the observations of the outhouse to the others. Declan contributed his videography skills to updating everybody on the inner workings of the outhouse. 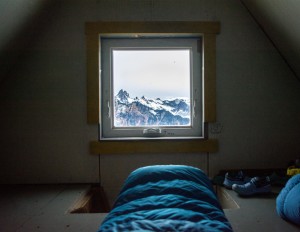 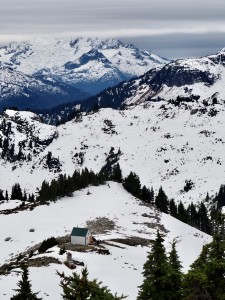 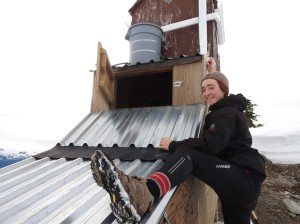 Declan deciding how up close and personal he should get with the shit-o-matic. Photo Cred: Cassandra Elphinstone

We started the hike back down, and soon the siren-song of the iced-over lake proved to be too much for both Tom and Declan, who jumped in with grim enjoyment. An enthusiastic attempt for Cassandra to join them was made, while Erica, Haley, and I made sure to give off our strongest no-ice-water-swimming-today vibes. 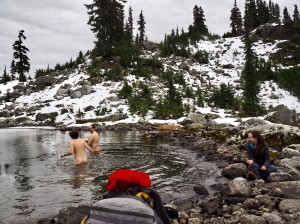 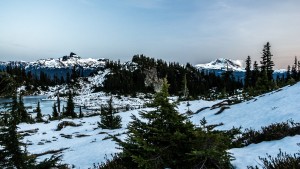 The hike down had a lopping team, a trail marking team, and a Haley/Cassandra team. We felt lucky that the rain started after we down-climbed the massive boulder field en route. Erica, Declan, and I kept ourselves entertained by telling each other Never-can-tell puzzles. 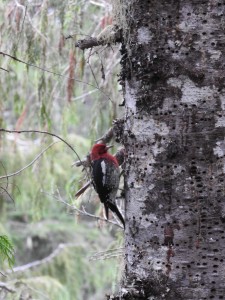 Birds go to work to – this one’s made lots of progress. Photo Cred: Cassandra Elphinstone

After two days of outhouse-discovery, we had one more adventure left: attempting to find Mags 99/Sunny Chibas for a feast of chimichangas and tacos: Declan and Haley working together to navigate may just be worse than one or the other by themselves.

I had a great time with some very friendly and accommodating VOCers (thanks especially for the ride there and back, and all the chocolate). I’m ready to get out there again and use my fresh knowledge of Squamish backroads and restaurants, the inner workings of UBC outhouse politics, and a newly-expanded vocabulary.

This entry was posted in Hike, Trip Reports, Workhike. Bookmark the permalink.