Maybe don’t try to drive to Cape Scott in October

Over Canadian Thanksgiving, I was compelled to try to get to a place I’ve been trying to go since I heard about it: Cape Scott, a provincial park on the very tip of Vancouver Island. The views are meant to be astounding, the trails surprisingly mellow but extremely worthwhile, the forest teeming with mushrooms, you can basically see Japan from there, and other wonderful facts. The only trouble was that it was 495 kms from Victoria to Port Hardy, after which another 60 on logging roads, and that the forecast called for 50mm of rain in a day. Foolishly, I thought: I’ve spent a lot of time being damp and (cynically) cheerful in Canada, this will be fun. It was, kind of, but – don’t do it.

The drive up to Port Hardy itself was long but uneventful. We stopped to sleep at Cedar Lake rec site (Canada is so big and so full of cedars and lakes that there are two Cedar Lake rec sites. I mean the one not outside Golden), which contained many signs like “be mindful of the migrating toads” (which instantly made me resentful that I couldn’t find any, seasonality be damned) – it’s lovely, free, accessible, has cedars and a lake, and is in general highly recommended as a layover for any north Island jaunts. (So, at least one “what to do” as opposed to “what not to do” came out of this trip.)

The next day found us looking at Port Hardy and Port MacNeil, which were exactly what we expected, enjoying the extreme friendliness of the locals at the grocery store where we picked up the obligatory sidekicks, etc. Then came the logging road. At this point rain progressed from drizzling to pouring and the sides of the adjoining hills were a good “natural laboratory”, as certain folks say, in fluvial geomorphology. It was all starting to appear eminently dumb as an idea (and the second half of the expedition made me keenly aware that it was in fact *my* dumb idea (fair)), but here we were. I had driven roads like these often before, but usually in an F350 and not a Toyota Matrix (that winner of the sensible-fuel-efficient-occasional-trips-to-IKEA-and-picking-someone’s-children-up-from-soccer contest), and was quite keenly aware of my lack of radio / lack of Stanfields / lack of four wheel drive compared to the occasional other traffic. 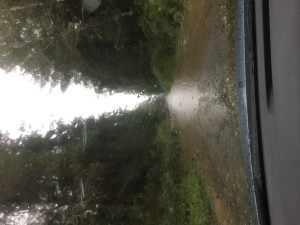 It went…kind of ok. There’s a weird “drive too fast and you get water in the engine & are well fucked, drive too slow and eventually you will stop driving altogether” balance to strike. Opinions on where that balance is differ; this difference of opinion was voiced. Anyway, we made it, drove another ~5 km, found a bridge, and also a river that was…livelier than maybe usual. It was the sight of several 50-or-so-year-old conifer trees just chillin’ in a meter-plus high stream that convinced me: ~550 km or so from home, we were making an about-face and Not Going to Cape Scott Today. We were, of course, encountering Mr. Puddlestream again, though.

The second journey through Mr. Puddlestream went again a bit ok. (I crossed myself, which the rest of the expedition found unnecessarily dramatic but I used to race track against Catholic school girls and thought it was cool when they did it so whatever.) (Driving 15 km/hr in first gear worked. Adding that datapoint to the set, hoping to keep n low though.)

We now found ourselves well up-island with no plans at all except maybe to fuck off and have a shower. We visited the Port Hardy museum (Ilya – ok, so it’ll have fishing nets, old white settler people furniture, kelp, and rocks. He was bang-on & experienced a bit of social stress when he disappointed the woman running the place by not buying the book about the time her grandfather was shipwrecked here even after showing kind and polite interest.). We went to the local tourist centre, asked whether people drove the Port-Hardy-Cape-Scott logging road in fall, got told ‘no, it washes out every single fall and like maybe the helicopter will come get you but really also maybe not’ by a very polite woman who was doing a reasonable job of restraining herself from adding ‘also don’t stick any of your appendages in a blender or drive your stupid car straight into the ocean’, thanked her, left, debated why A&W was so much better than McDonald’s (only slightly more expensive (29 cents difference for the combo meal) and you don’t feel like a trashcan greasefire after caloric intake!), had a proper A&W commercial moment when Ilya bit into his Beyond Meat burger and said wait they gave me a regular burger even though they hadn’t, and in general puttered south. After 500+kms in a day, I topped off the day’s harmless but persistent failures by behaving like a European at a four way traffic stop (rules- different!) and getting yelled at by some dude with a truck lift such that his wheel well was roughly my eye-height in my eminently sensible Matrix. (He was right; I was wrong. It’s funny in retrospect. Retrospect is great.) 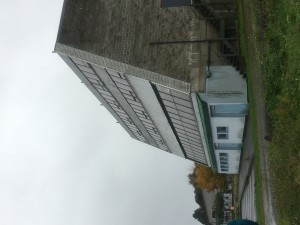 Anyway, the rest of the weekend passed uneventfully. Providence rewarded us for turning around with a remarkable white chanterelle and lobster mushroom harvest at a provincial campground. We got home, worked on pet projects, rode bikes sensible distances, drank ok coffee, made mushrooms on toast, and in general enjoyed the feeling of not being stuck 37 kilometers up a heavenforsaken logging road somewhere. 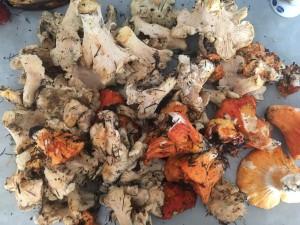 Could this 1000-km detour have been prevented with a judicious look at the forecast, a realization that most of Cape Scott is at sea level & so probably turns into a bog-lake in these conditions, & in general a good dose of common sense? Heck yes; hence the reason for this trip report. Don’t do it. The mushrooms and mist were nice, though.