The Price of Powder

Having experienced not one, but two Snowmageddons in the month leading up to New Year’s, there was a strong suspicion among us VOCers that the somewhat remote slopes around Phelix hut could become powder caches. With this in mind, a trip for New Year’s was promptly planned by Melissa.

Several sleepy cars left Vancouver around 6.30 on Friday morning, with the plan to all meet up at the Pemberton McDonald’s and drive up to the trailhead together, as there was concern that Daniele’s tiny M&S-outfitted car would not make it up the road. Unfortunately we all forgot about the ritual mass exodus to Whistler and got stuck in an entirely avoidable traffic jam, delaying our arrival by an hour. We finally made it to the trailhead around 11, and threw on our overnight packs, skis (or snowshoes) and beacons, excited to start the day.

Then the faff commenced.

‘TEN MINUTES’ yelled Melissa. Rhys checked his watch – it was 11:30. We began to place bets on how long it would take to actually get moving. Twenty minutes later, we set off. By this time, it had started snowing pretty heavily, and the group quickly became spread out, with Alex, Maiya, and Ana hard charging in the front, determined to set a new FKT (faffiest known time). Rhys, Ivan, and Melissa formed part of the group in the back.

Our aim was to reach the hut by nightfall. For those of us who had been to Phelix before, the approach seemed a lot shorter in our heads, and we were confident that we could reach the hut reasonably fast. Adding to our delusion was the fact that the first half of the “trail” follows a flat logging road: since most humans are proficient at walking on flat ground, everyone was able to clear this section in record time. As we passed the gate to the second lot, we encountered some pretty beat-up looking skiers heading down who laughed maniacally when we asked them what the conditions were like for the rest of the trail.

Rhys and co took a quick lunch break at the upper parking lot before continuing through the boulder field into the trees. Needless to say, the rest of the approach was a struggle. The boulderfields were covered in a thick layer of powder, and navigating the kickturns became challenging. Many blisters were spawned here by the members of the hard-charging group. There was no respite from the suffering: after the boulderfields, the trail got steeper, narrower, and, to top it all off, Nature decided to place small icy benches here and there, forcing people to take off their skis, step up, then struggle to put them back on in knee deep snow. Everyone’s blisters soon developed their own blisters: a fascinating, yet sadistic phenomenon.

Somehow spared this torture, Ana decided to break away from the group and continue on ahead. Sometime around sunset Rhys’ group heard a chilling scream, which they put down to one of two things: either Ana was being mauled by some animal, or she was relieved that she had reached the lake. As it turns out, neither was true: she was simply releasing her frustration at having to break trail in the dark. Not long after, the group was overtaken by John, Christian, Lea, Claudia and Daniele, the snowshoeing group.

After a hideous final two kilometres – which included blind a traverse across the lake – Rhys’ group reached the hut. Somehow the others had only arrived around ten minutes before them, having tried to go through the trees instead of straight across the lake. 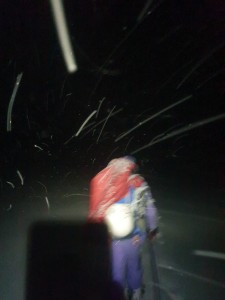 Wet and tired, everyone collectively realized that there was no firewood. Lea and Rhys volunteered to cut some logs, only to find that the large axe had broken. Reduced to using the hatchet, they used the textbook technique of hammering it into the logs with the other end of the large axe head, eventually cutting enough to actually start a fire.

The others arrived soon after. Alex and Ana pulled out bottles of scotch, and we all had our long-awaited dinner (Scotch included) before promptly passing out in our sleeping bags upstairs, dreaming of powder and blue skies.

We woke around 9:00 after  a surprisingly decent sleep. At about 11:00, a couple of snowshoers (Rhys and Adi and co) left to go and see the upper lake. A group of skiers  (Alex, Ana, Maiya, Ivan, Melissa, and Zosha) decided to go run laps up and down Cabin Hill.

Snowshoers: Although it’s only half a kilometer away, the going was fairly tough as we had to break trail through deep snow all the way – as well as find a trail that was far enough from the stream to prevent us from falling into it. Upon reaching the lake, we discovered that it had a thick layer of slush above the ice, which didn’t exactly inspire confidence. Adi, however, was unburdened with the fear of an icy death and confidently trekked out to the middle. We returned a couple of hours later and, after finishing lunch, decided that we couldn’t be bothered to do anything else that day.

Skiers: We had an adventure wading through steep powder before eventually finding a faint skin track up Cabin Hill. Once on the track, the going became ridiculously easy. The powder was cushy and soft, and we skied the most perfect pillows coming down some moderate westerly slopes. Following our Fearless Leader (Alex) we tried some jumps off the cliffs at the top, face planting into some delicious pow. Everyone had a fantastic time as the snow quality was top-notch. After a couple laps we headed back down to the hut, eager for some food and scotch. 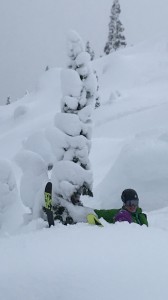 Once everyone was back at the hut, the New Years festivities began. Melissa had wisely called in some reinforcements to haul up more food and alcohol, and this brave duo (Berto and Adam) soon joined us. We threw two tables together in the middle of the room and decked them out with our own potluck items and shared drinks. A healthy fire was soon started in the fireplace. Scotch, wine, and ouzo began to flow freely.

Rhys discovered a dusty wizard hat and promptly appropriated it.

Ana dumped a packet of cider powder in a liter of Alberta Premium, and the fumes from this eminently drinkable concoction left many a VOCer light-headed.

A scrabble game began in earnest, and the half-drunk players created very highbrow words such as “fap” and “yeet”. 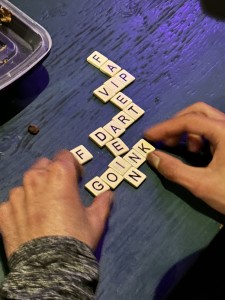 Adi had brought some quality smoking material and several of us joined him outside in the cold to puff puff pass.

Several poor taste sheep jokes were made at the expense of Rhys (his very Welsh accent was a source of amusement).

Close to midnight, Adam, having imbibed a witches’ brew of various beverages, began earnestly trying to convince others to strip naked and run around the hut several times at midnight. When asked why he thought this would be a good idea, he shrugged: “My train of thought has left the station!”

We weren’t sure he’d follow through on his plan, but gathered outside at 11:30 anyways. Sure enough, Adam was there, starkers in the New Year, ready to go. God bless the warming power of scotch! He ran a stumbly lap around the hut in knee deep snow before falling, dick first, into the icy path at the door of the hut. Rhys, clad in his stolen hat, acknowledged the absurdity of the moment: “Don’t mind me,” he laughed, “I’m just standing here in a wizard hat, watching Adam with his cock out”. Adam, freezing cold, attempted to climb the ladder to his sleeping bag upstairs whilst clutching his clothes against his naked body in a futile attempt to preserve whatever modesty he had left. Unfortunately, he was too drunk and dropped all his clothing off the ladder, and was then forced to walk down entirely nude to retrieve the items.

The night progressed in a drunken blur. There was dancing, mulled wine, and an apparently orgasmic back massage given to Ana by an inebriated Melissa. Sometime past midnight, Rhys decided it would be an excellent idea to take several long exposures of the moonlit mountains by plunking his phone into the snow. The phone died, but he was unperturbed. “That’s a problem for next year,” he said, about 5 minutes before midnight. 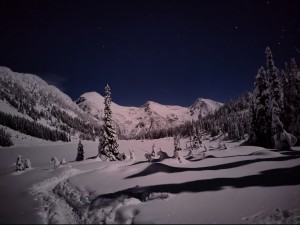 When midnight hit, all of us gathered inside for a very cheesy rendition of Auld Lang Syne (what does this song even mean??). VOCers in various stages of inebriation then made their way upstairs into what would turn out to be a very pungent medley of wet socks, sweat, and farts.

The beautiful weather prompted the skiers to wake early and get as many runs in as possible. 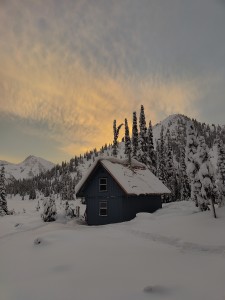 A small group (Ana, Ivan, Adam, Zosha) had to leave and began the descent: about half the group left that morning, making Adi and Rhys the two remaining snowshoers. Some of the remaining skiers ran some more laps. 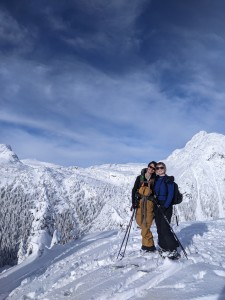 Bluebird powday: what a way to start the year! PC Melissa

Snowshoers: After some discussion, we decided to go back to the upper lake and try to climb the south col of Mount Gandalf. Rhys had his reservations due to the avalanche conditions, but agreed to go and see how it looked. When we got there, suspicions were confirmed: Rhys didn’t want to go anywhere near the top of the col. Even after considerable explanation Adi seemed oblivious to the risk, so he tried to go a bit further up while Rhys waited, Gandalf hat donned, and ate a sandwich. About fifteen minutes later Adi returned, having not made much progress, and we both decided that Cabin Hill would be the wiser choice. The climb up Cabin Hill was more difficult than expected as the snow was so deep, but we made it after just over an hour. The sun was setting by this time, so we decided to make a fast descent. Rhys returned to the hut with Marko, Nelson, Berto and Alex, while Adi insisted on trying to climb the south col for the second time…in the dark.

That evening, a decision was made that  it would only be wise to reduce the load for the next day by finishing off the mulled wine. This led to some pretty energetic (read: atrocious) renditions of quite a few songs from the hut songbook. Apologies to the people who were trying to sleep.

Adi and Rhys being the only two snowshoers, they thought it would be wise to leave before the skiers – who they thought would inevitably overtake them. This was discussed with the others and it was decided the snowshoers should leave around an hour before them, while the skiers would go up Cabin Hill and ski down the other side, thus avoiding most of the forested section that had caused so many problems on the way up.

After keeping a good pace the entire way down, Rhys was confident that he  would reach a warm car with skiers waiting. They reached the car just under four hours after leaving the hut, only to find that it was empty. The skiers still hadn’t arrived by the time Adi got down, about ten minutes later. It would be about half an hour before they saw Alex, who told us that Melissa had had what he described as an ‘epic’ in the woods. 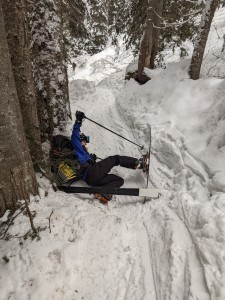 Unskiable terrain leads to many views like this on the downtrack. PC Melissa

As it turned out, they decided not to ski down the other side of Cabin Hill and therefore found the forested section somewhat difficult.

You know the descent is bad when the snowshoers are faster than the skiers!

3 Responses to The Price of Powder