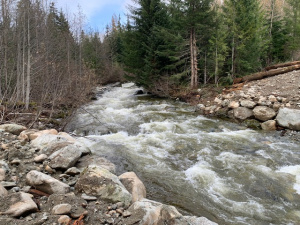 Nov 2020 Update: Bridge across Roe Creek was removed on Oct 26th. You can no longer drive the road to the R200 turnoff. Creek can be more than a meter deep after a lot of precipitation. The VOC is looking into options for a foot bridge.

The Roe-Brew Trail first came to light around 1999, but it wasn't until 2006 that it transitioned into a winter trail and then until 2011 that it also became a summer trail. The history of the trail construction can be read here. The trail can be both hiked and skied.

The trail starts off the R200 Branch of the Roe Creek Road in the middle of a cut-block (circa. 2012). Look for the orange diamonds on a large stump about 50m up road from the 9.5km rock. The trail wraps around the broad ridge running south from Mt. Brew on a bench, connecting with a meadow system just south of Brew Lake. Along the bench the trail ducks in and out of patchy forests and the tail end of some talus slopes. At the meadow, the trail gradually turns left up towards Brew Lake.

From Brew Lake the trail turns West-North-West into the alpine and haphazardly travels up through thick heather and gentle boulder fields before turning North towards Upper Brew Lake. The trail passes the lake on the east side and continues north up towards the saddle of the bowl. At the top of the saddle, the trail turns east and the Hut will be visible a few hundred meters up on-top of a bouldery ridge. In summer, there will be a small glacial tarn below the ridge in between you and the Hut. This is the drinking water lake so fill up here before travelling the last 100m up to the Hut.

By any access route, the final alpine section before reaching Brew Hut is an off trail hike (or ski) and there are no flags or markers. In good weather, navigation is relatively straightforward, however, whiteouts conditions are common above Brew Lake and so good navigation skills can be necessary to reach the hut. A map (92 J/3) and compass are essential to have along.

The trailhead can be accessed via the Roe Creek Road. 4WD Parking is at 9.5km and 2WD parking is at 5.9km (from Highway 99). At the 4WD parking, walk up the road about 50m and look for orange diamonds on a stump that mark the beginning of the trail.

The historic route from Roe Creek was to go up the Roe Creek logging road branch R-200 to it's end, and then climb up onto the top of the ridge that runs south from Mt. Brew. The ridge can be followed up to the alpine west of Brew Lake, and there are several places to drop off the east side of the ridge towards Brew Lake.

While this route is much safer than any of the other access routes to the Brew Hut, avalanches can still pose a threat under unstable conditions. The avalanche hazard along this route is similar to the avalanche hazard along the marked winter route to the Elfin Lakes hut in Garibaldi Park. The route crosses several open south facing talus slopes between 1150m and 1300m elevation. These slopes are steep enough to avalanche under the right conditions. Since the slopes are at low elevation and sheltered from the wind, only rare circumstances would create avalanche hazard. The slopes are south facing so they frequently see pinwheeling and small wet loose snow avalanches, but these types of slides are generally not very dangerous here because of the small size of the slopes. The CAA below treeline avalanche hazard rating is applicable to these slopes.

None of the slopes are very large, with a maximum height of about 50m and thus they are not capable of generating avalanches larger than size 2. The first of the slopes at 1150m is difficult to avoid. This slope is 31 degrees. The remaining ones can be easily bypassed in the forest on the downhill side.

The alpine section of the route from Brew Lake to Brew Hut is very open terrain. It is possible to navigate this section without being exposed to any avalanche slopes, but it is also possible to wander into avalanche start zones, especially in poor visibility.

2011 September 24 - Phil Tomlinson
A large VOC crew of 14. Permission was recently granted to upgrade this trail for summer use. This was the first trail workhike conducted with that in mind. Much of the trail has already been worn in from informal summer season use.
2008 August 23 - Scott Nelson & Roland Burton
Cut remaining large diameter logs that were laying across the trail. removed stumps from trailhead to start of bench system. Put some logs across wet areas to bridge snow: slide alder patch between 1st and 2nd rock slides, stream between 3rd and 4th rock slides, Removed 2 standing trees with red tape plus several standing dead that were on or adjacent to the trail.

This section describes the trail pre-2013. Logging during the summer of 2013 has pushed the trailhead almost to the base of the first rock bluff.

Datum for all waypoints is WGS84. There are presented in order of usefulness.

These waypoints (WGS - 84) have been tested in a complete whiteout. Taking a topographical map to accompany these waypoints is a good idea.