Lessons Learned in an Intro to Backcountry Skiing

Posted on January 28, 2012 by Frans Kouwenhoven

Trip Report by Kate and Frans.

After spending most of Friday on campus in the rain and not knowing whether the trip was even going to happen or not, I was finding it somewhat difficult to work up the motivation to get ready for the trip, but it turned out to be a great weekend! After a number of destination changes due to the less than ideal avi forecast (I lost track of them all), we ended up heading toward Iago along the Coquihalla Highway. Driving conditions were interesting on the way there, but Helene’s new car Bambi did brilliantly and we all arrived safe and sound (although Helene’s back was stiff from stress). It was the sort of morning where when you’re home in the city you look out your apartment window and cancel any outdoor plans you may have had, but once we started it just added to the charm. Snow was falling, the powder was deep and I felt like I’d just stepped into a Christmas card.

The skin up to the campsite was beautiful.  Snow was falling, the temperature wasn’t too hot and wasn’t too cold, and everyone was enjoying themselves and the fresh mountain air. 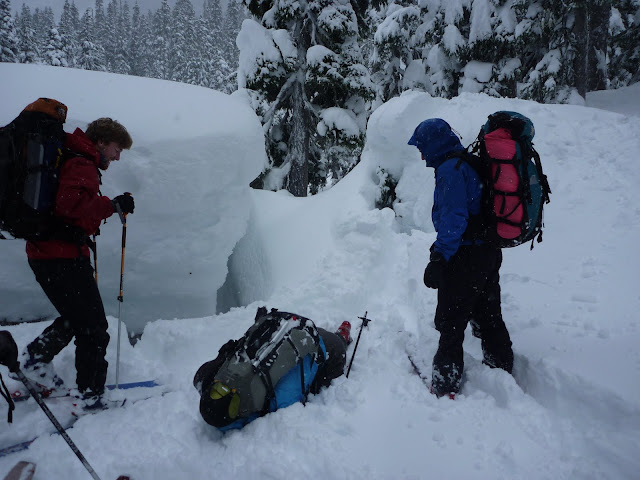 We stopped for lunch along the way and ate Olek’s chocolate without telling him and waxed our skins to prevent snow from building up. We reached the campsite in good time, and I had way too much fun learning to fill bags with snow and bury them instead of using pegs and using skis to prepare a tent platform (it’s the first time I’ve camped on that much snow!). I had less fun once I took them off and tried to walk around though.

For myself, the entire weekend was a great learning experience.  The first decision to icksnay the 2.5+ hour drive on a snow swept sea-to-sky just so we could find some high risk avalanche slopes reminded everyone that the trip begins before you ever get in the car; however, most of the lessons I learned started rolling in once we got to camp.

Lesson 1: Picking a flat spot to pitch a tent will save you a lot of time and energy grading snow.  That being said, Brett and I still had a damn sexy camp site.  It just took a little longer.  And was a little harder.  And ended up a little slanted.  But it was still sexy!

A couple of the guys tried to dig a hole to find a river but just ended up with a very deep hole and no river. But it kept them out of mischief so I guess it served its purpose! 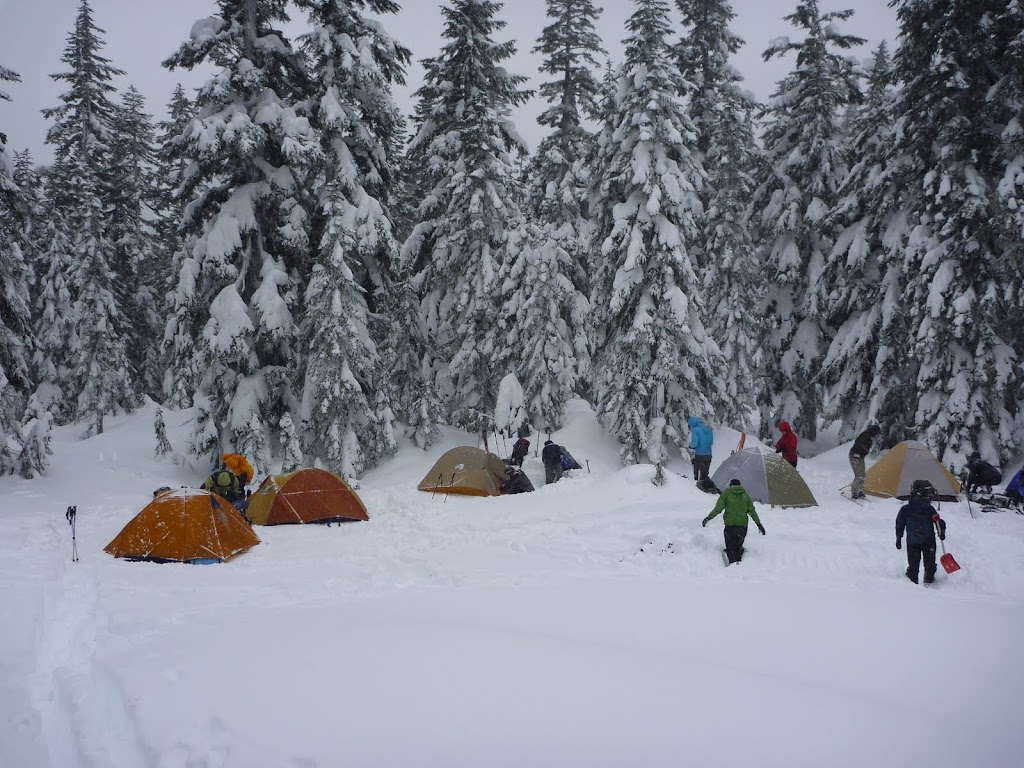 Finally we were all ready to go ski something! I had my first try at breaking trail, stuck at it long enough to try and prove I wasn’t a wimp and then gladly handed over to Jess when she wanted a go! At the top we dug a pit to see just how sketchy conditions really were – we decided to stick with very shallow slopes. Thanks to Knut for a very detailed description of what he was doing and for answering all my questions!

For those who are curious about the results, Skyler, Marius, Noriko and Adriana performed both a compression test (CT4 Q1) and a Rutschblock test (RB3).  Results are what I recall, someone can feel free to confirm/correct them and add more information.  As Kate said though, we were not skiing any slopes > 25 degrees today.

Then we got to ski! All those people who’ve had to patiently wait with me on previous trips while I fall at every corner, you would have been so proud of my beautiful tele-turns

(Well, they were a lot better than before anyway!) Although skiing through trees in the dark is still a bit of a challenge…. When it came time to skin up again I tried to do it without taking my skis off but instead ended up with everything covered in snow when I lost my balance!

Lesson 2: If you’re going to ski in the dark with trees everywhere, at least do yourself the courtesy of equipping a modest headlamp.  I’m not really sure if my batteries were running low, or my headlamp just didn’t have the lumens necessary for this particular activity, but – and this might just be me – repeatedly running into branches you can’t see and skiing extremely conservatively (read: falling in the snow… a lot) is not fun type 1!

Somehow though, it is fun type 2: While I was definitely wet and miserable when I got back to camp, by the next morning I was happy to have had the experience.  Funny how that works :).

Back at camp we had to just about dig out our tents before enjoying a delicious dinner to the melodic sounds of Skyler’s ukulele – which he somehow managed to play without losing his fingers to frostbite – and topped it off with some spicy mulled wine and Baileys infused “warm” chocolate. 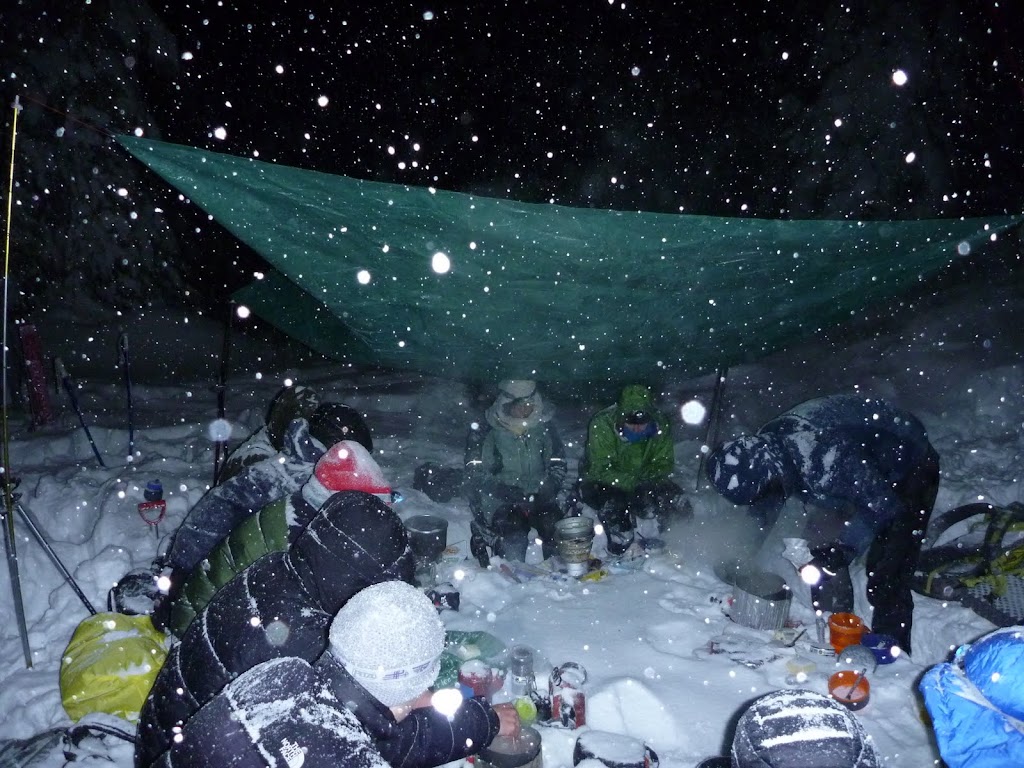 It was a little bit wet. Photo: Adriana Muja

Lesson 3: When you go to bed in your tent at night and it is snowing outside, make sure you’ve set up your fly correctly so as to prevent the snow from gathering on ventilation holes.  This is key to living.

I woke up sometime in the middle of the night and noticed that even rolling over in my sleeping bag was causing me to need a while to catch my breath.  I though to myself: “Wow, I think that we’re running out of oxygen in this tent.  I guess this is good practice for when I go to the Himalayas.”  Then I went back to sleep.  Some time later I awoke again and had to go the bathroom.  I saw Brett was awake, now also breathing faster than normal.  He told me he had been “considering opening the tent door because it felt like we were asphyxiating, but didn’t want to wake [me]“.  I don’t want to assume the lack of oxygen was already playing a part in our thought processes, but it very well may have been.  In the end, we did open the door (good thing I didn’t have a pee bottle) and the added oxygen was extremely satisfying.  We brushed the snow off the outside of our tent and slept much better the second half of the night.

Next morning we went back up the skin tracks and continued on past the pits to the peak. A few hardy souls decided to race on to Great Bear peak for a challenge, while the rest of us skied back down. This was my kind of skiing, not a tree in sight!

A group of us had such a good time that we hiked back up to the top from near the tree line to get in a few more turns.  The snow was amazing and the skiing was excellent. 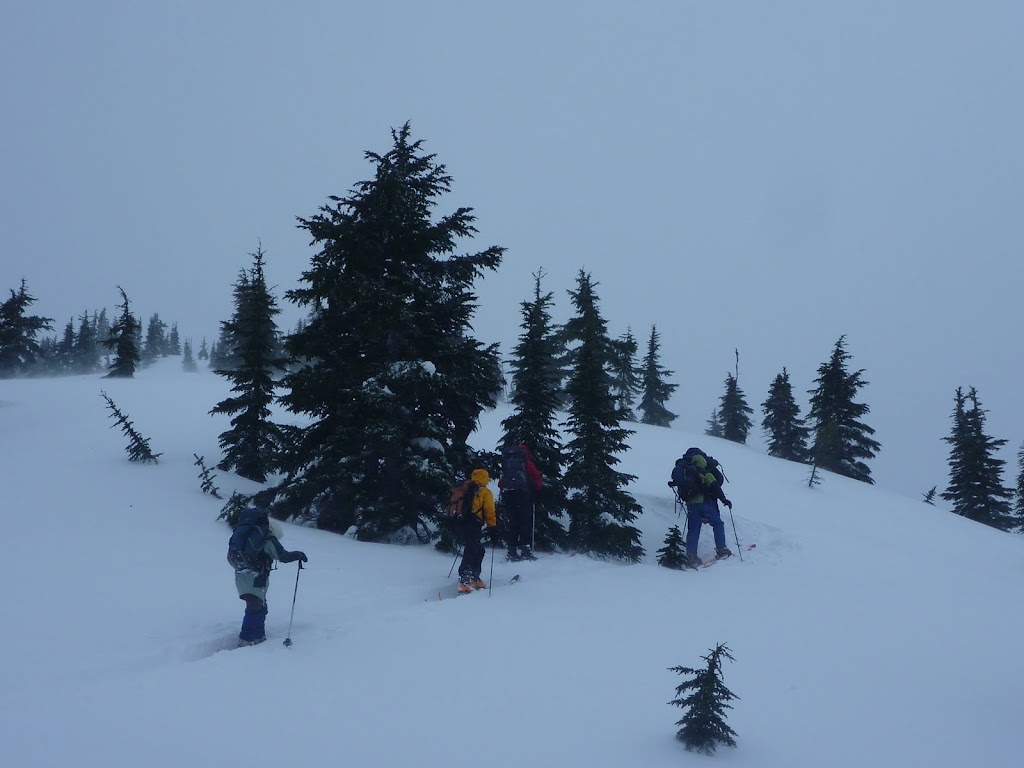 Then the trees came back and I used my tried and tested face planting trick as a method of cooling down, possibly a few too many times… I now have a very sore neck and shoulders. I did however master putting on skins without taking my skis off. Don’t bother, it is far more effort than it’s worth!

Lesson 4: VoC trips don’t disappoint :).  Saturday night, things were looking grim for my overall satisfaction with the trip.  After my not so awesome skiing in the dark (see above), I came back to camp and soon discovered that neither my jacket, nor my pants, were as waterproof as I had thought.  This led to a cold, wet Frans – not often a happy fellow.  However, Sunday turned everything around.  Skiing through trees is a lot easier when you can see where you’re going and pick nice lines.  While the evening of day 1 may have been full of type 2 fun for me, day 2 was nothing but type 1.  I gained a lot of experience skiing in powder, my faith in telemark was restored once Skyler imparted the wisdom of “Back foot, back foot!” and even face planting to the laughter of my peers was met with smiles of my own.

Once again back at camp we packed up and had a photo with Knut’s beautiful VOC sculpture. Artem then tried to jump over it and instead ploughed straight through and landed on his head in a hole on the other side! Unfortunately we have no video footage of it so you’ll have to use your imagination, but I promise you you’ll laugh.

Once we set off again I cooled off with a few more face plants, but I managed to do some beautiful turns down a nice little slope, even with the pressure of everyone standing at the bottom watching me! (Although I did wobble somewhat at the end…. I stayed on my feet though!)

Back at the car for dusk, we figured the adventures were over but we still had the road back to travel! Bambi once again proved her worth, even when we couldn’t see out the windscreen because the washer jets weren’t working! We relieved the tension with a Disney sing along :). Dinner at the Home Restaurant in Hope was delicious, Frans and I somehow volunteered ourselves to write this, Noriko nearly forgot her wallet, we filled Helene up with coffee to keep her alert for driving and we all made it home safely at the end of a wonderful trip full of lots of Type 1 fun! 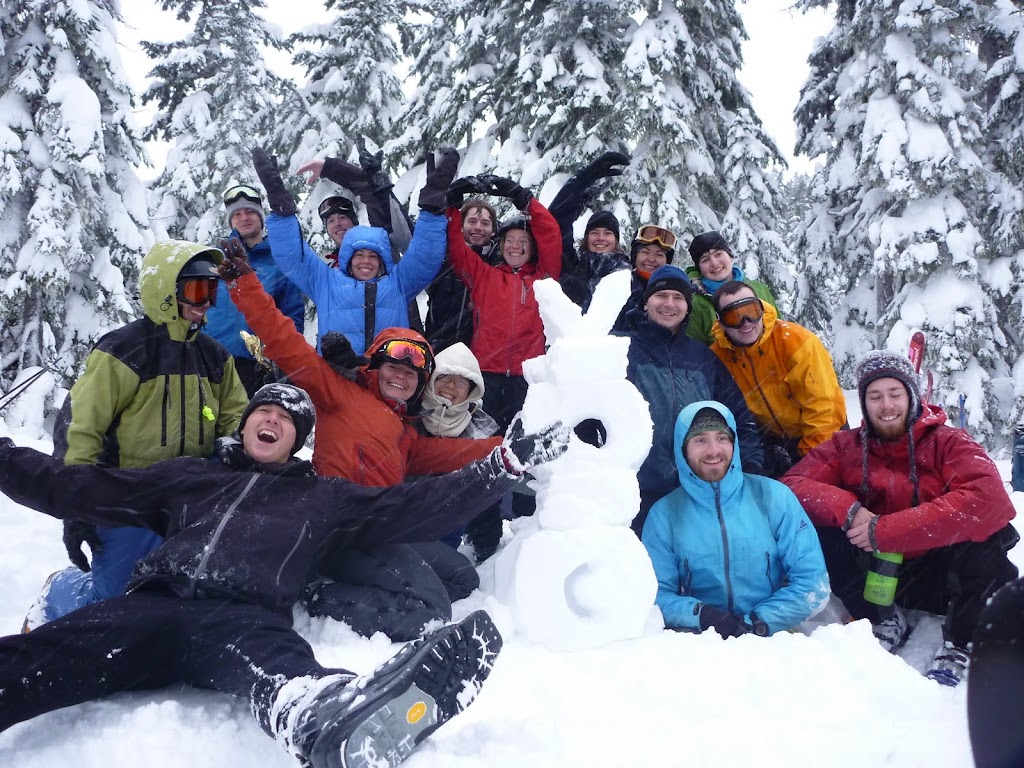 One Response to Lessons Learned in an Intro to Backcountry Skiing