On Saturday Feb. 25th a group of five VOCers including Jess, Diego, Ian Ryan and myself headed towards Joffre lakes to summit Mount Cayoosh and do some skiing, or in my case rather more or less controlled falling down snow slopes. The avalanche danger was predicted very low, which made it the perfect weekend for this undertaking.

Upon arrival at the parking lot we saw that we had not been the only ones with the idea of spending this weekend in the mountains. The parking area was crammed with cars and we had to park a little to the side as there was no space left. Fortunately we had planned on camping and therefore did not need to rely on securing a space in a hut.

The first part of our way lead along a logging road. It was surprisingly warm and we had to stop several times to drop layer after layer of clothes. After a while we had to leave the logging road and skin up a forested slope. This is where I took my first fall. It must have looked quite spectacular as I landed right on top of Ian’s skies who was skinning up behind me.

As we went on I began to realize that this was not going to be an easy trip for me. The others seemed to skin up effortlessly, whereas my legs were starting to show first signs of fatigue. I was therefore very happy when we decided to set up camp close to a frozen lake and continue with only our day packs.

As we proceeded towards the summit of Cayoosh our way became steeper and steeper until finally with only a couple of hundred meters left we had to take our skies off and continue on foot. Ryan and Ian carried their skies all the way up to the summit, but the rest of us left them in the snow below.

When we finally set foot on the summit there was only about half an hour of daylight left. The view was amazing, but we did not have much time to spare. We took a quick group picture as proof of our heroic ascent and then started our way back down. 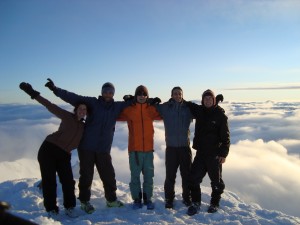 Group picture on the summit of Mount Cayoosh

As it was already getting dark we had to use headlamps to find our way back to camp. The descent took quite a while the main reason being my poor skiing skills (Thanks everyone for being so patient), but we all managed to ski back to the campsite. Some of us more elegantly than others, though.

Dinner consisted of tortellini and a whole square foot of brownie that Jess had carried in. We retired to our tents soon after. The next morning saw us doing some more runs in a nearby valley until we decided that it was time to return to the car.

Returning to the car involved going down the previously mentioned logging road again, which by that time was completely covered in ice. I do not know how everyone else managed to stay in control of their skies, but whenever I tried to snow plow my skies were caught in old icy tracks. The only option to reduce my speed seemed to be to fall every once in a while. Preferably sooner than later, because I kept getting faster by the second. I was therefore very happy when the “logging road ordeal” had an end and we finally arrived at the car.

On our way back to Vancouver we decided to stop by the Shady Tree for dinner, where we inevitably ran into some other VOCers. I am sure the others will agree when I say that we all had a great trip.

One Response to Skiing Trip to Mount Cayoosh