The horn blows, over a hundred paddlers all around me start paddling like mad, and I think to myself CRAP, as my left hand is in my poggie, and the right one isn’t yet.

But lets rewind to the start.

The day is December 9th, the 7th annual Deception Pass Dash. My second time. It’s a yearly event that takes a huge group of paddlers over a 6 mile long course through the beautiful and swirly waters of Deception Pass, Washington. The turning point of the race is around the top of Strawberry island which is situated in the fast flowing Deception Pass. The diabolical concept of the race is that it is timed to start 15 minutes or so prior to tide turning, and the longer you take to get to the top of Strawberry Island, the tougher it becomes to get there at all, due to the current getting stronger by the minute.

One of the things that makes sea kayak racing interesting is the unpredictability of conditions you’ll be facing. In my experience this often means wholesale amounts of headwind that makes one quietly curse the race, the weather gods and that guy in front of you making it look so much easier. A solid mix of Type 1 and Type 2 fun.

This year’s race attendance was a bit down from last year, largely attributed to the race changing organizers last minute and uncertainty on whether it was actually going to happen.

The one good thing to come from this is that Caitlin and I were allowed to camp right at Bowman Bay, as guardians of the fleet of boats dropped off the day before the race. Normally there are plenty of volunteers for the position and you have to stay in the nearby state park or bunkhouse.

The night’s cold changed to a light morning drizzle, and the crowd gathered for the event.

As always, it was great to see some familiar faces, ogle at some shiny boats and wish people good luck while secretly hoping you’ll get to the finish before them.

After a short warm up I got in the lineup towards the rear left. Some time around the 1 minute warning horn blast I realized that I probably put my hydration pack upside down on my back deck and feverishly tried to flip it over, without any luck. It ended up being fine once the air pocket came out of the top.

The starting horn caught me slightly by surprise as I expected a 3-2-1 countdown that never came. The first leg of the race to Deception Island went clean enough, but having rounded the island we hit some moderately strong headwind on the long straight-away to Deception Pass. Some people pulled ahead, as others fell back, some people searched for the most efficient and sheltered route along the sides, most went straight on. I lost a couple spots, which I later regained towards the end. I felt sorry for the Stand-Up paddle-boarders, who act like a giant sail on their boards. Yet the fast ones were every bit as fast as the kayakers. Mighty impressive.

I was happy to finally reach the wind shadow of the Pass. The next leg of the race to the turning point went clean, including the “Crux move” when you break out of the eddy and sprint against current towards Strawberry Island.

Returning to Deception Island, with the current and wind at my back I caught up to a couple racers that passed me earlier on and passed them as one was visibly exhausted and another managed to let the current turn his boat and (harmlessly) hit a rock.

Then it was time to face the headwind one last time on the final straightaway to the finish.

I held on to my position and was glad when I finished, somewhere in the middle of my class. Good times, had by most. About ten percent never finished, and the last few that did got mighty exhausted. The After-race BBQ sandwiches were delicious. We chatted for a bit with people and then headed back home to Vancouver.

I will pray to weather gods for bigger waves and less headwind for next time. 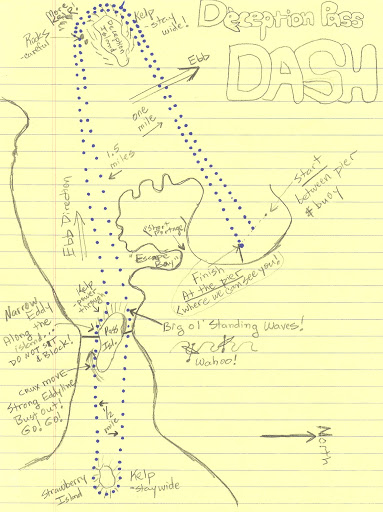