Posted on December 5, 2012 by Marie-Eve Myrand-Lapierre

Rain and a lot of snow… pretty much the same weather than the last attempted trip to Brew Hut two weeks ago. Because we were only 5 instead of 20, we came to the conclusion that we would be faster, and after all we only have 5km to ski… yes, sounds quick and easy… We wanted to cross the bridge around 8am, but Phil Tomlinson said: “are you sure? You know, there is only about 20 minutes of day light…”. So we decided to cross the bridge at 7:30am instead… But we should have crossed the bridge around 5:30am… you will understand why.

We drove up to the bridge. We started to hike around 9am. There wasn’t enough snow to ski from there, so we attached our skis. Matt had a very interesting way of doing it… 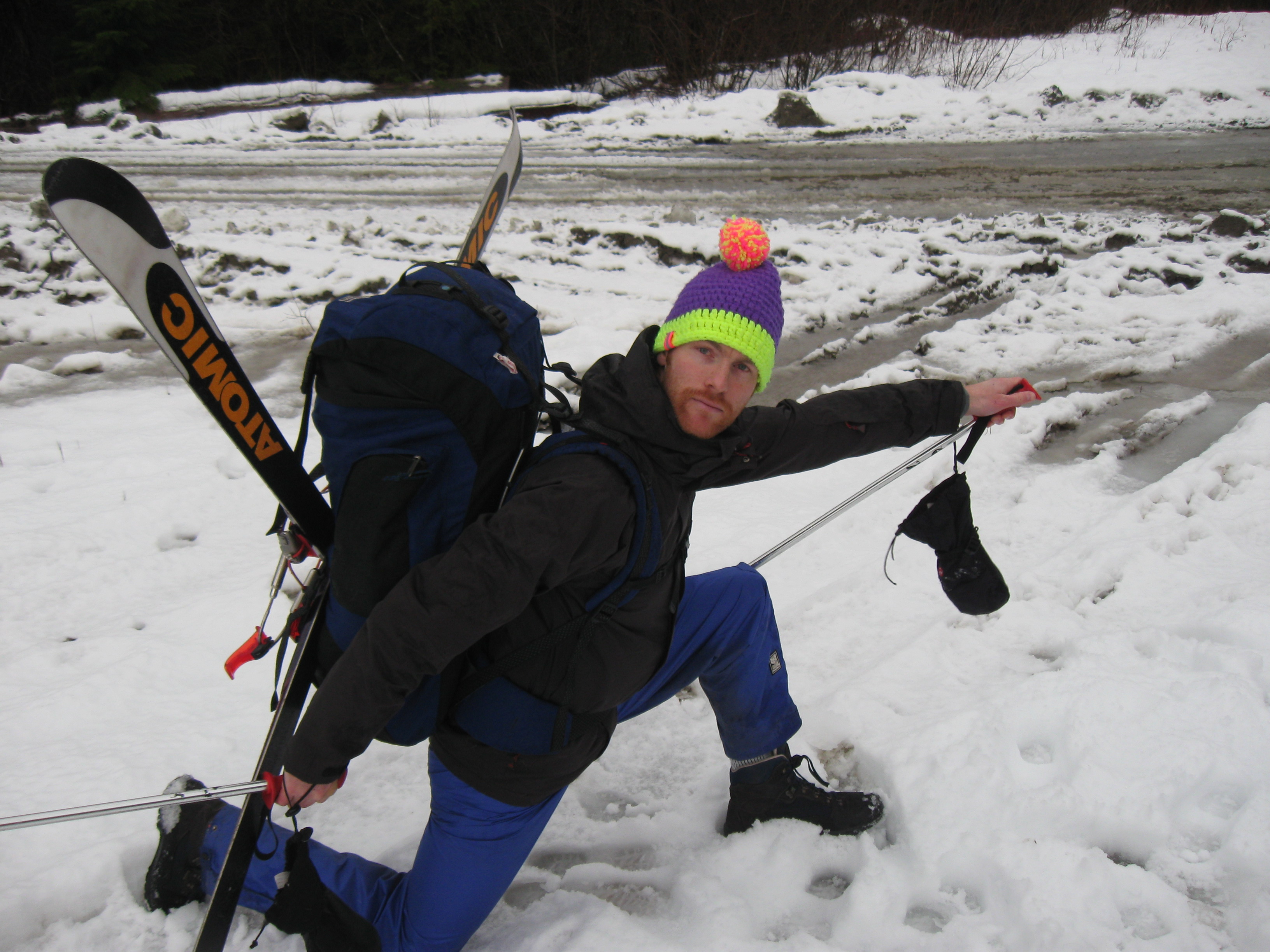 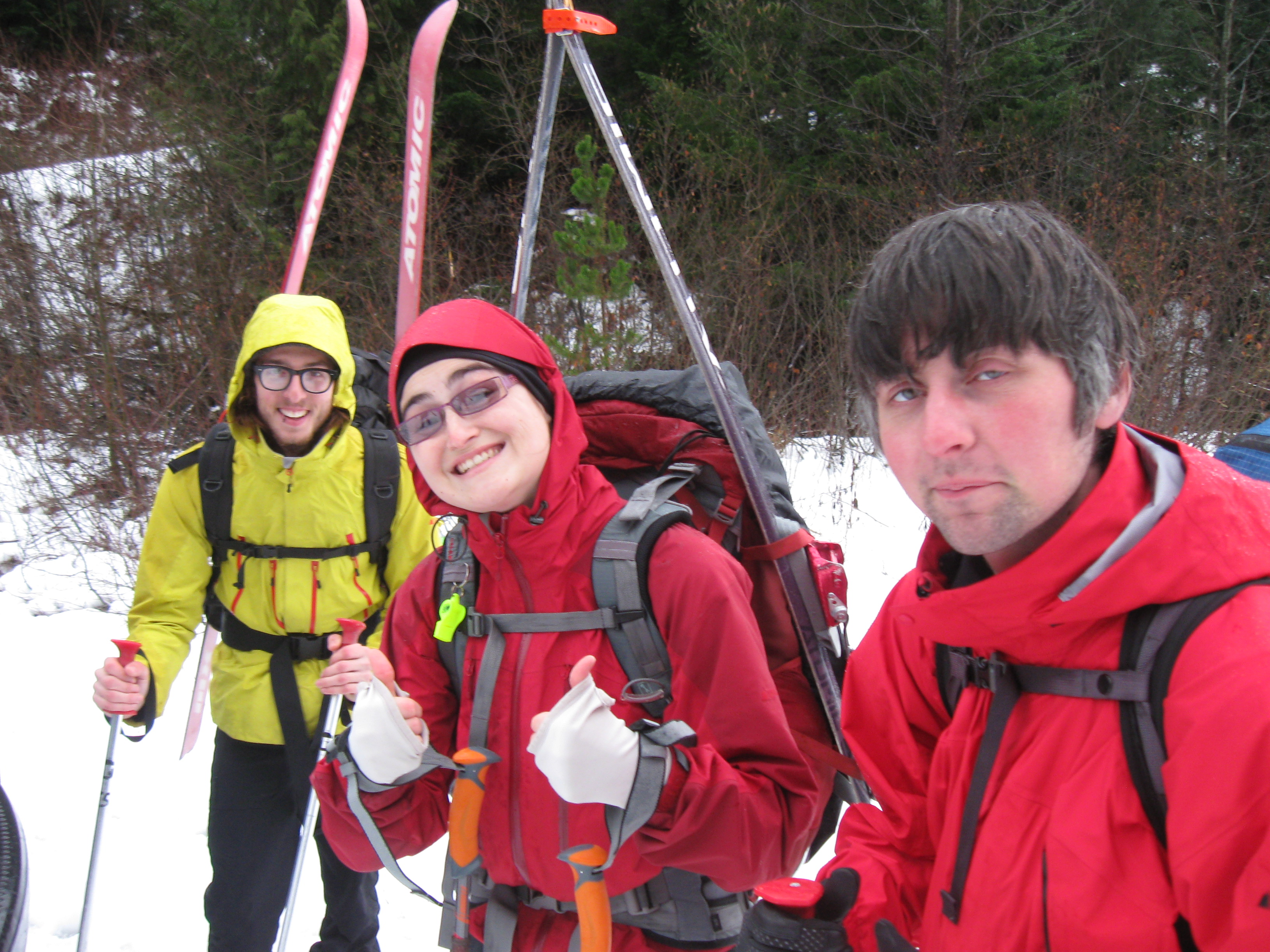 I had a lot of troubles with my ski boots in the last few trips, so it was the third pair I tried. I tried to hike with them, but it started to be a bit painful, so I switched to by running shoes. Ross and Matt started to hike with their hiking boots right at the beginning, assuming it was going to be faster. Not long after that, the show started to be quite sufficient to ski. I wore my shoes just long enough to make them soaking wet. Ross didn’t want carry his hiking boots, so it put them beside a tree. 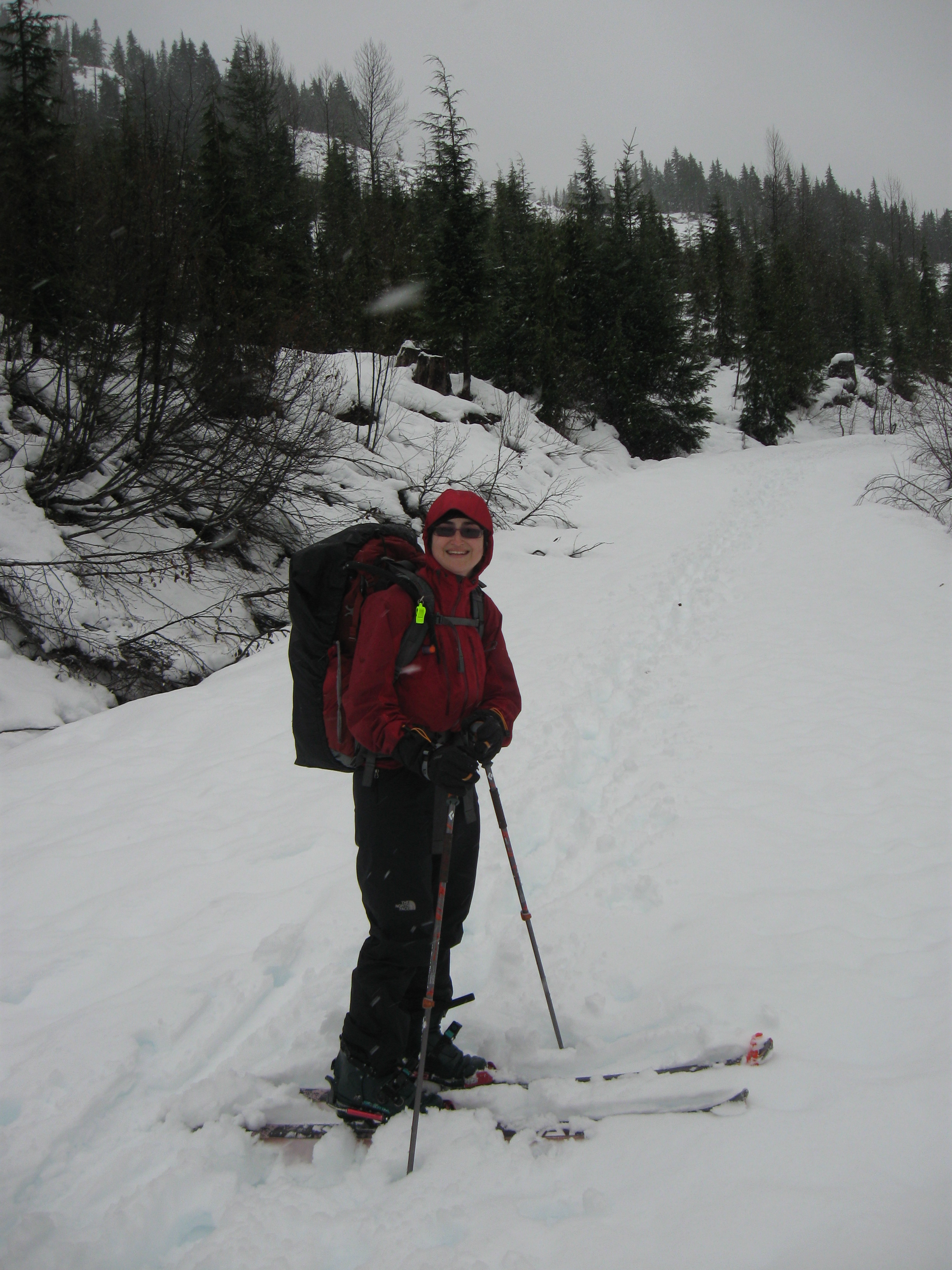 The beginning was quite challenging. We had to break the trail with 30cm of powder. Quickly, we reached the forest. There was less fresh snow accumulation, so the trail was way easier to break. And we were following two nice split boarders which broke the trail for us. Around 2pm, we reached the meadows. That’s where things became quite interesting… 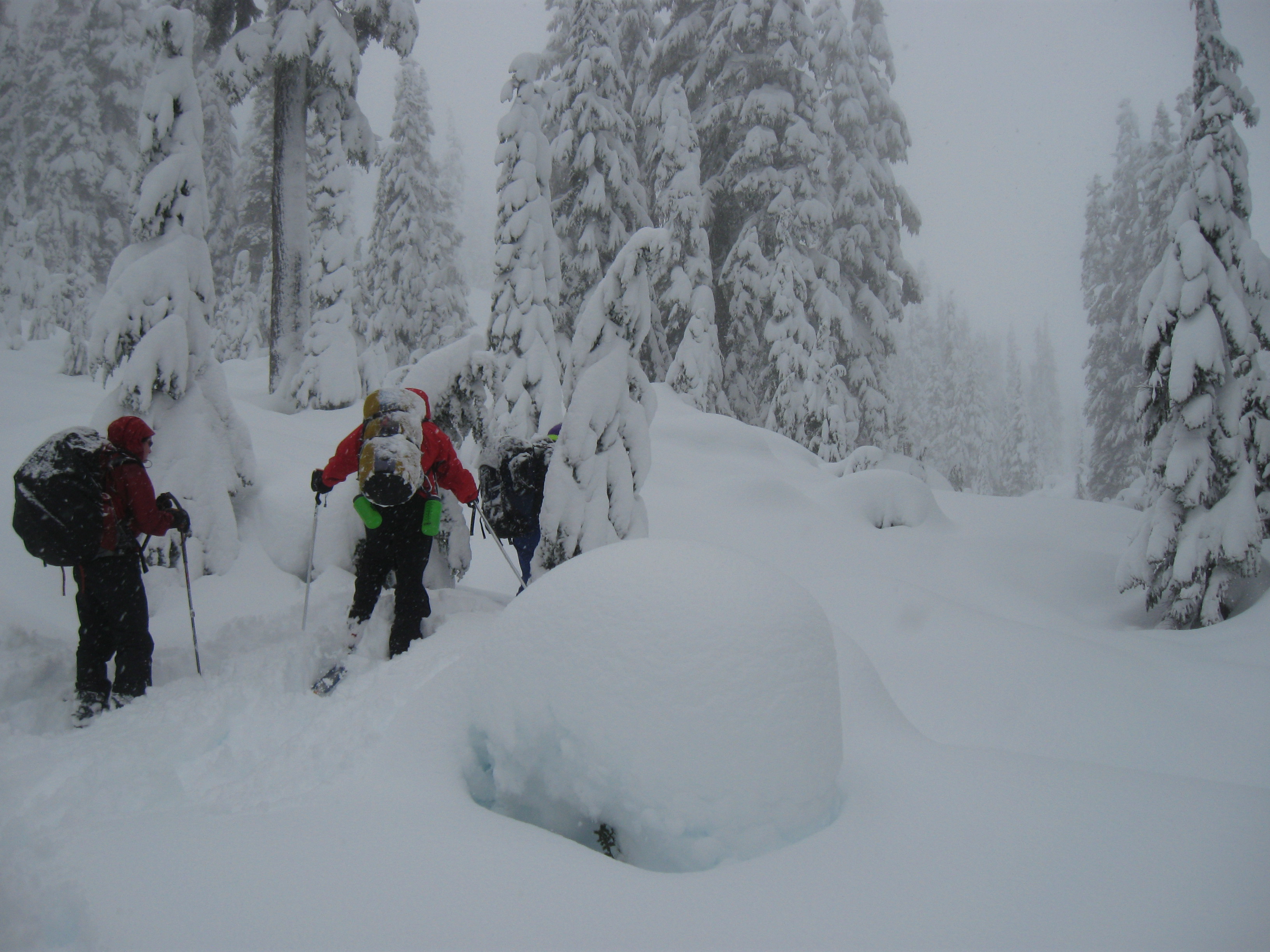 It took about an hour to ski 200 meters. According to Jeff calculations, at this pace we would arrive at the hut around midnight. Ian came to the conclusion that there was no point to turn around; we did more than half of the way.

Jeff took a few minutes (more than a few… around 15 minutes) to find and add a layer. When he reached us again (which was not that hard considering our pace), he discovered that we were not on the right way. We were on the other side of the lake, heading on the wrong direction. Well… we turned around and decided to always wait for Jeff and his GPS (of course, he was the only one to have a map and a GPS…). This is where I decided to stop to pee. I really enjoyed this moment, especially with the snow storm. Sometimes, I wish I could be a guy… 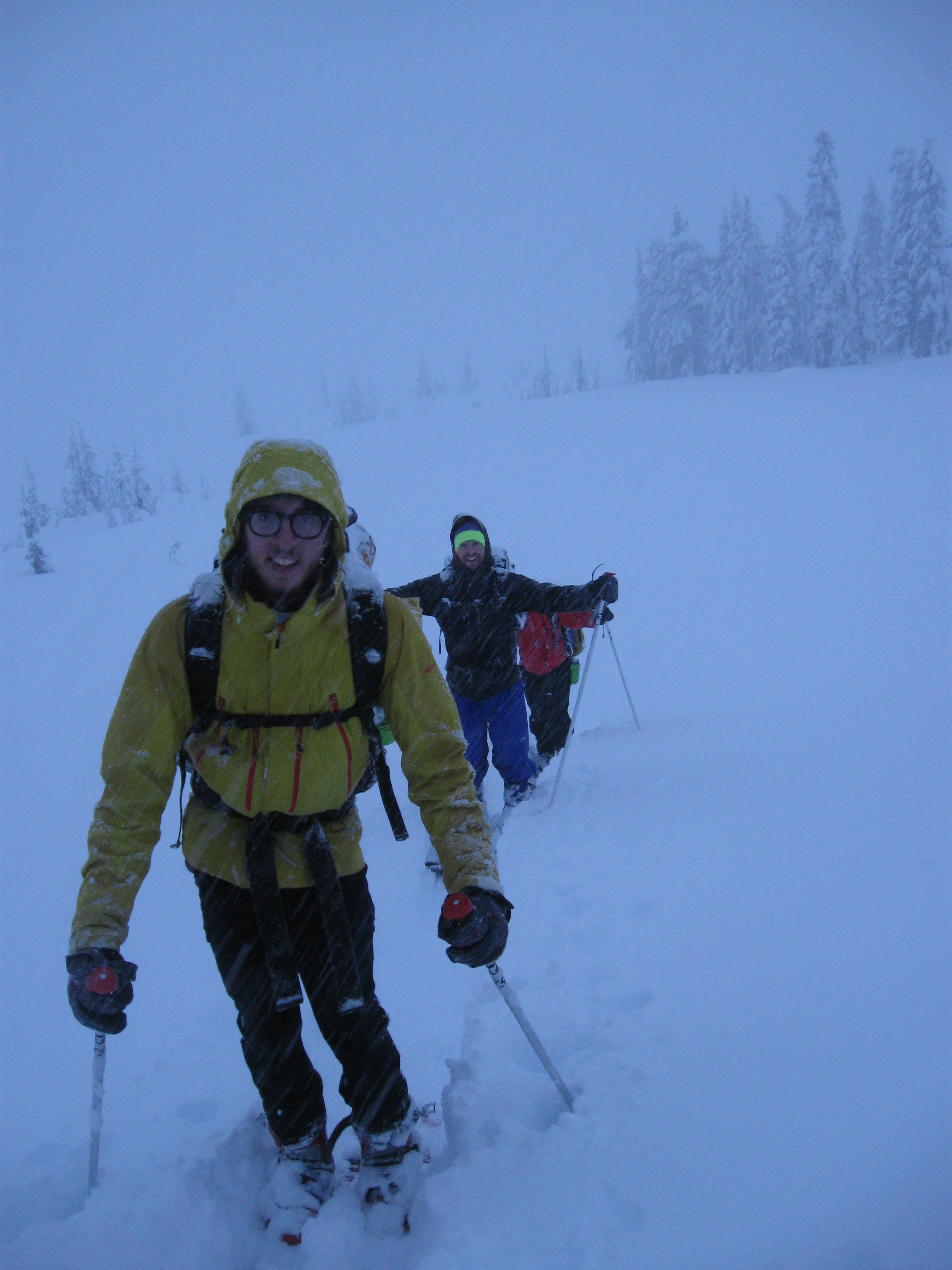 This is where we discovered the super power of Ross. He was not breaking the trail, he was destroying it. We made a lot of progress at a satisfying pace, until he got tired and I had to take the lead. Well, I didn’t stay there for too long… on my defense, I was on a very steep slope! 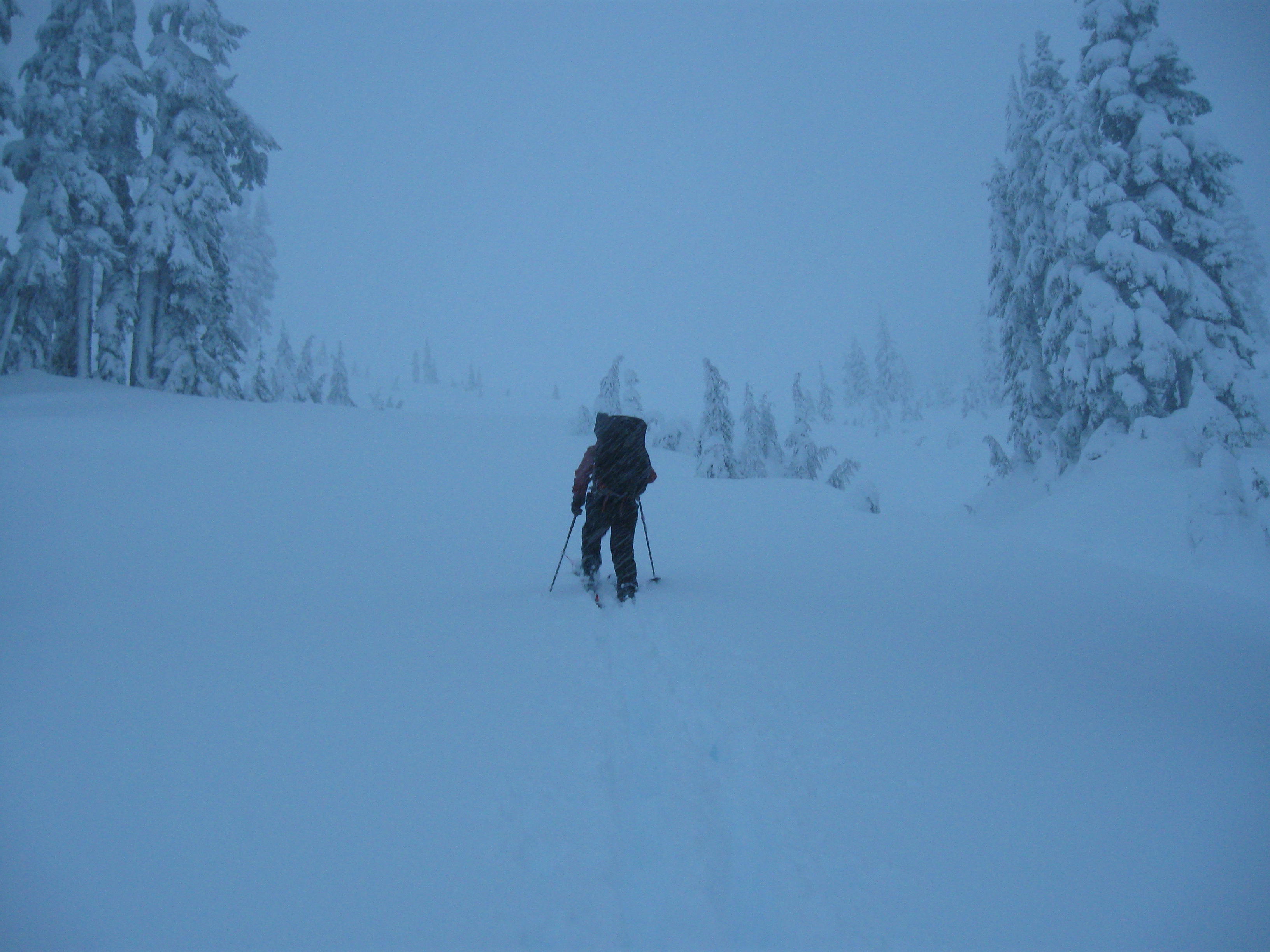 This is the moment where Jeff can of scared me: “The snow sounds like a tambourine, it’s not stable. I want to make a pit”. My knowledge in avalanche is quite limited. He told me it was just for his curiosity, because the slope is not steep enough to be dangerous for avalanche. Yeah!

We had only about 1km to do after the sunset. We had to find the hut in the dark (which didn’t make a difference because it was whiteout anyway…). At some point, Jeff’s GPS told us we were very closed to the hut, or even right on it. We looked a bit around, and there was no trace of the hut… This is where Jeff realised the GPS wasn’t on the right coordinate mode, and the hut wasn’t located at the right spot. So we followed the new direction, and around 7pm we finally found the hut. 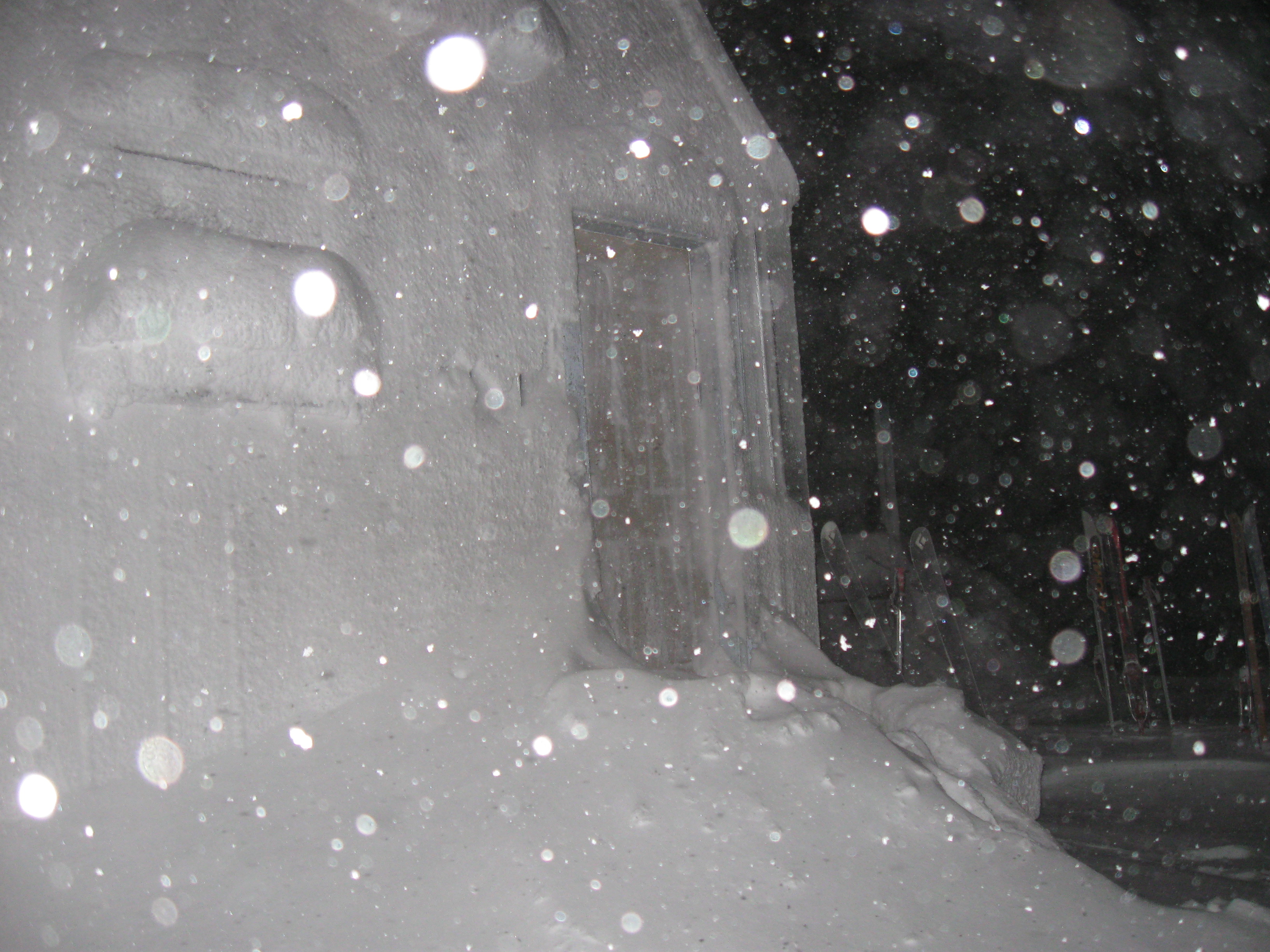 After an hour, we realised that Matt smarties were not enough and we decided to finally cook. We began by 12 huge tasty fatty spicy Italian sausages. That was delicious! We wrapped them in tortilla to contain the juicy fat. After, we cooked some pasta. When we considered that they were ready, some guys went outside to remove the water… and the pasta. Ross thought the pasta were so light! Quickly, they tried to take the pasta back in the pot (before the big storm blows them away). We heated them again, add the sauce, and it was finally were delicious! We finished this fantastic meal with a chocolate fondue. When I googled it, they said 120g of chocolate was enough for 5 people. Well, I brought 400g just in case, and it turned out to be just enough!

Pee was of course a big challenge for me. Reaching the outhouse was quite hard; I had snow above my knees. This is not ideal when you tried to dry your gear. So I decided not to reach the outhouse, and brave the storm for few minutes. So Jeff told me about the rule of the hut: left is white snow, right is yellow snow. I wished I knew that before I filled the pot with snow for the pasta…

We finally went to bed around 11pm (or 12?), and wake up around… 10:30am. I confess, I was awake a bit before that, but I was waiting for people to go off of bed, so I enjoyed my warm sleeping bag longer (and I had no idea of the time…). Ross wake up before us, and started the fire. We then took our time to cook and clean the hut, and we left around 12:30. Being lazy wasn’t the best idea ever. The wind was very strong, and it was whiteout again. That wasn’t the best ski ever, we had again 30cm of new powder snow to break, and we had no idea of what was in front of us. 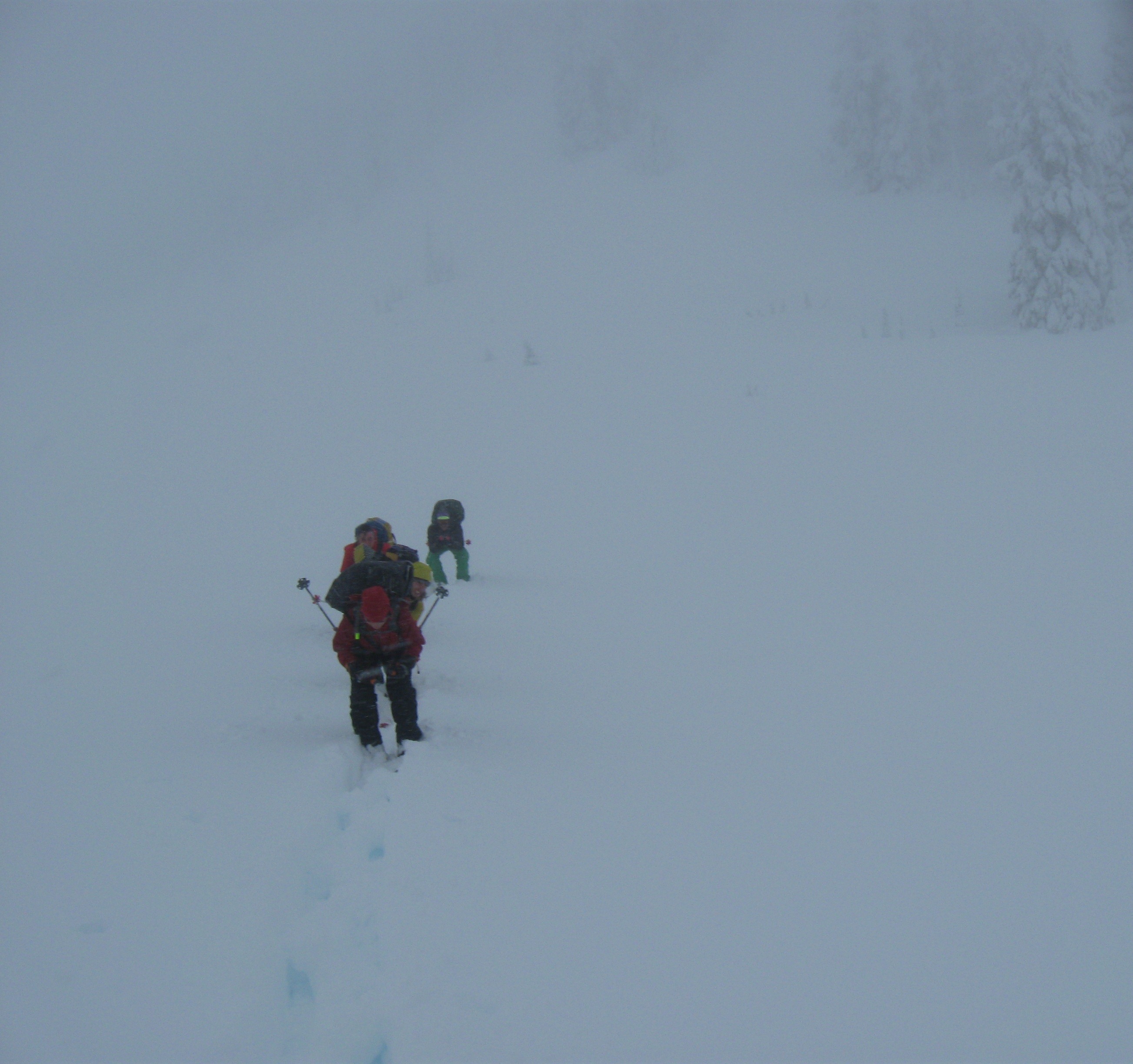 When we reached the kind of flat part of the meadows, we had to break the trail again. It was  bit faster than the day before, because we were overall going down. Ross showed us some of his falling skills (ok… I did a bit too!). 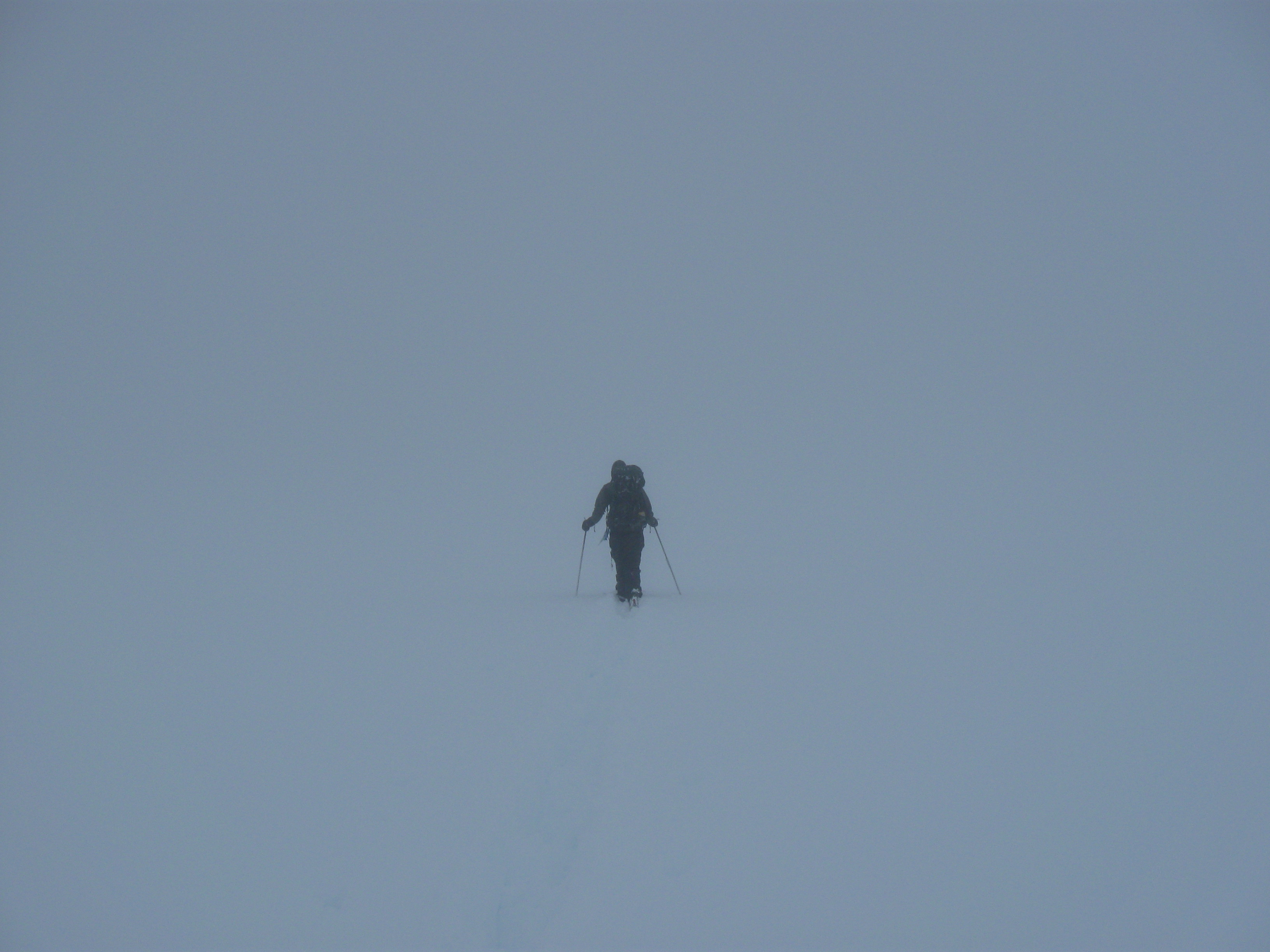 We were hoping to reach the logging road before the dark, but it didn’t happen. On the logging road, we were quite happy that a big truck broke the trail for us. Ross missed the junction where he left his boots, so he had to turn back a bit. We were able to ski all the way down (except the last 50 meters). Around 8pm, we finally reached the car.

Because of the snow (slush is more appropriate), the guys had to push the car. Then we stopped the car so the guys can enter it, and it was stuck again. So Jeff pushed the car, and then jumped on it while it was still moving. We were then all very hungry (we didn’t stop at all to eat), so we stopped at the McDonald in Squamish. Then we came back home safely, and Matt and Jeff returned the rented car 4 minutes before the time limit.

One Response to Brewski Brew Ski