Little did we know, that Diego and my chatting at Phelix hut about going to Squamish on the first weekend in the year would become reality…

After returning from an amazing four days of skiing, my stoke to slay some more pow was through the roof. Soon after our return to the civilization, I used my time at work to look up avi conditions and options for a nice daytrip on Sunday. While the danger in the alpine was considerable, the lack of precipitation meant a nice day out in the sun. Quickly, I started an email thread to gather fellow skiiers.

It was soon after, when Diego gave me a call to make me aware of the rising freezing temperatures, it was going to be +5C around 1500m, and reminded me of our chatting about rock climbing. It didn’t take him long to convince me, that rock climbing in fact sounds like a great option, and my stoke started to grow. Mentioning our plans, it was easy to fill my car with five fellow climbers and it didn’t take a lot to convince Alfred to join us with a second carload. At the same time I heard that filling a Modo-van with 7 people to ski at Baker seemed difficult – what a strange Winter…

So I found myself driving over the Lion’s Gate bridge at 8:30 heading towards Squamish, I must confess that I quite enjoy the late start of a good cragging day J During the ride, we realized, that between the five of us, we had 4 ropes and 5 racks. This somehow quickly translated into the idea to try some aid-climbing.

Upon arrival in Squamish, Artem and Kat went on to Krack rock and Diego, Sam and I planned to aid up Mosquito and join the two of them. During the gear-faff, Alfred and his companions, Elize, Jim, Luka and Tianna passed by and Sam decided to join them to go to Burgers and Fries. 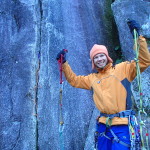 In the meantime, Diego started leading the first pitch on aid and Alfred got stoked to try it as well. While Diego continued his quest upwards, Alfred quickly decided that it was a stupid idea and went on to Burgers and Fries. I followed Diego up. We enjoyed our two pitches of aiding, both lead by Diego and little did we know that when we topped out, almost 4 hours had passed. This was quite and eye-opener. Nevertheless, it was a great experience. Being new to the idea of trad climbing, those two pitches of aiding gave me great confidence in my cam-placements. Hanging full weight of the double-zero feels quite amazing. And our last tri-cam was epic, too bad I thought about my camera too late. 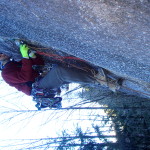 After topping out, Diego and I joined the rest of the group at Burgers and Fries where each of us got three more leads in. Diego also got a chance to reveal the power of Hexes… 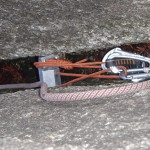 We got rewarded by a great sunset over Howe Sound. We met Artem and Kat back at the car and rounded the day with a good pint at the Brew pub topped up with some Samosas on the way home. 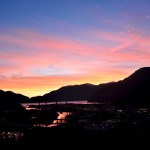 All in all, we had a great day and got super-stoked for a successful rock climbing season 2014.