Ian and I awoke in Calgary hearing that the others (fresh from Vancouver) were ready to go from Canmore. The plan was to skip the crowded and easy-to-get-to-crags along the Trans-Canada highway and go straight into the Ghost Valley. We hurried into his truck, then waited for the others at the access road. 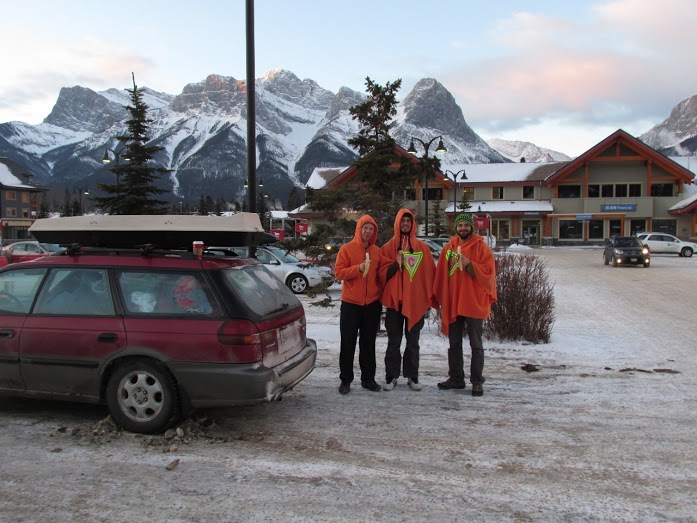 The road in to this remote valley is rough, with guidebooks varying from 2wd-okay-but-not-friendly to 4WD-killing. With the floods in the area last summer, we were unsure how far we could actually drive. Typically, the road isn’t plowed but is on the dry side of the Rockies, windswept, and blasted by Chinooks. While this weather makes most of the road drivable, it can mean that there is a giant snowdrift at the top of the hill and creeks to ford with treacherous ice banks.

With 2 trucks and a Subaru Outback, we drove along the access road, only getting the Subaru high-centred on snow once before the big hill dropping into the valley. Once in the valley, we parked it and took the two trucks. We bypassed a piece of washed-out road and headed into the north Ghost, occasionally getting hung-up in deep snow drifts. Finally we were stopped by some gnarly creek crossings. Here we set up camp in the gathering dark, knowing that we’d have a bit further to walk to the climbs, but could walk across a nice ice bridge over the creek and along tire tracks. We had a nice fire and made plans for the next days. 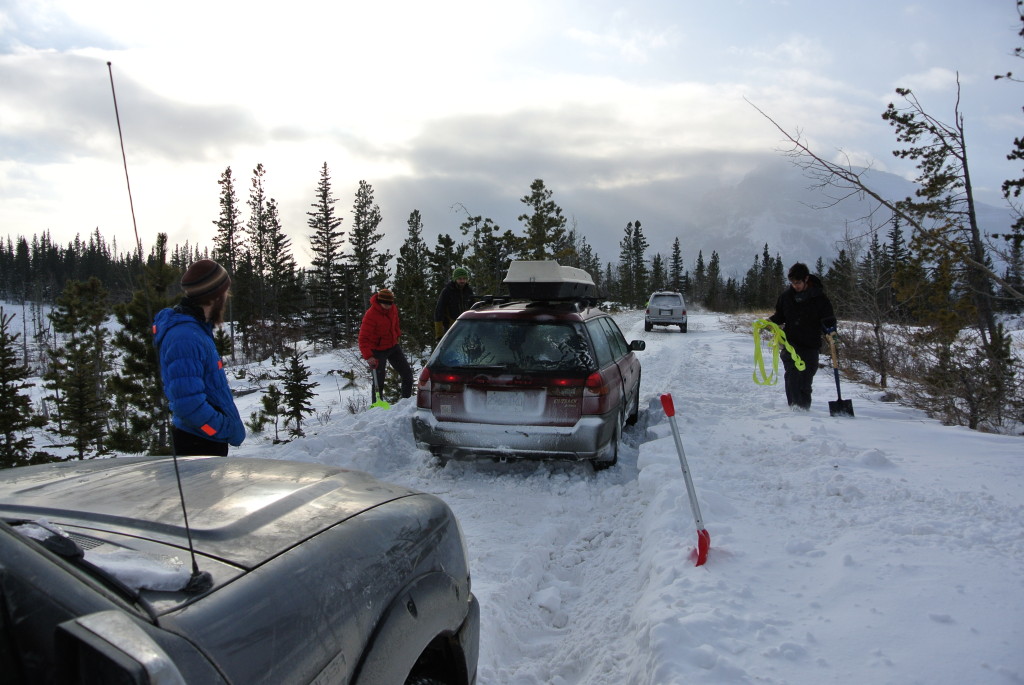 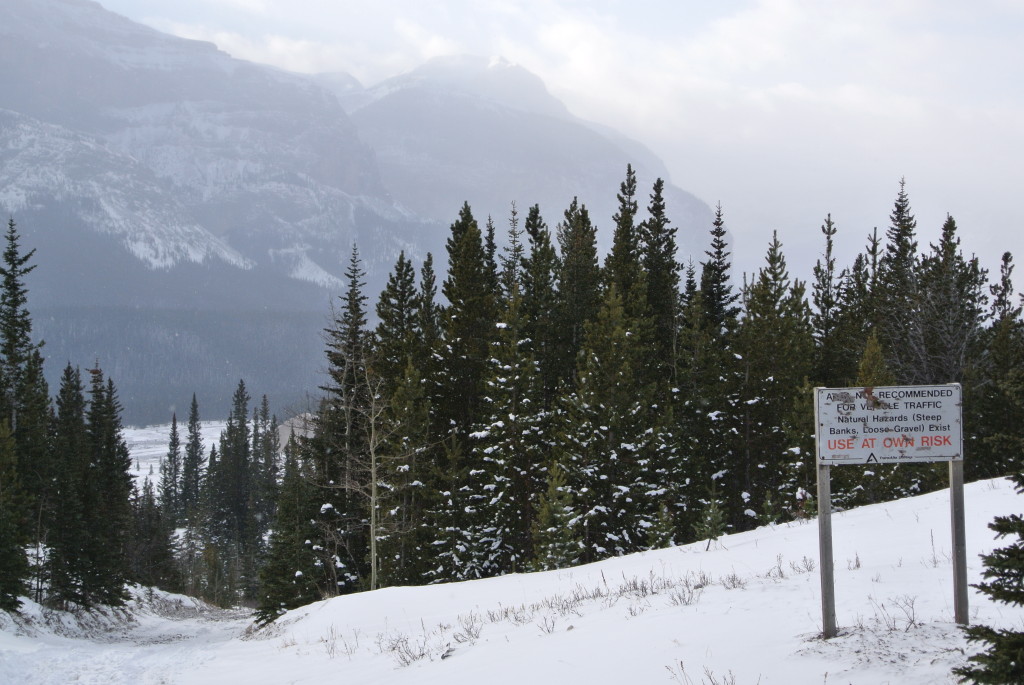 Top of the big hill with a sign modified to say “recommended traffic.” Sounds legitimate to me! 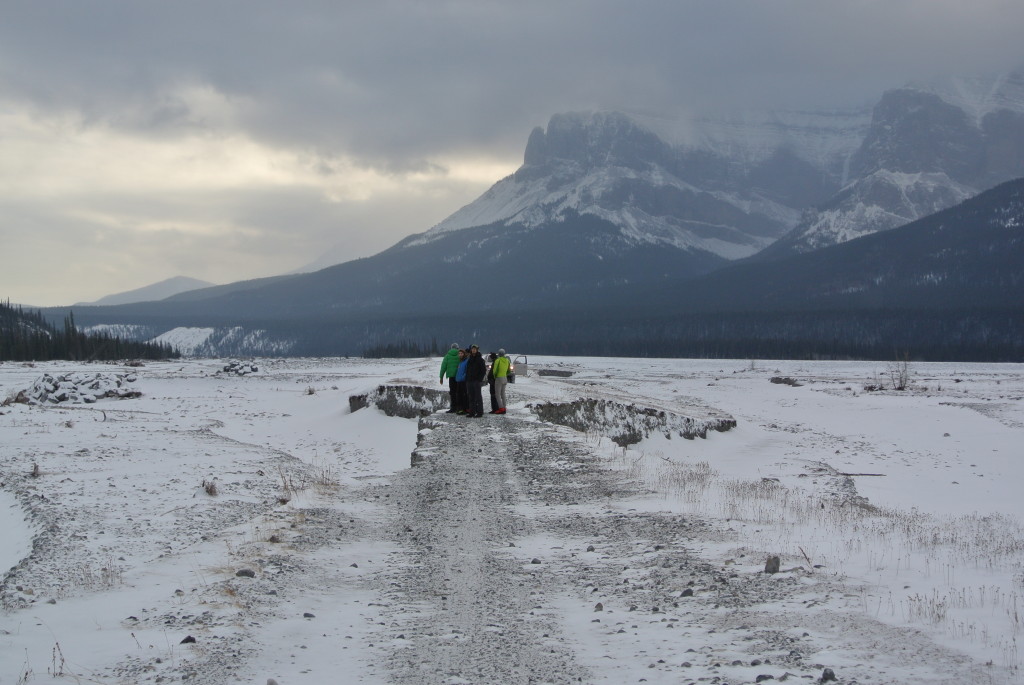 The next morning was quite chilly and beards quickly froze up in the pre-dawn approach (much, much to cold for faffing, but we had a ceremonial faff regardless). We made the 6 km hike to the Good, the Bad, and the Ugly (GBU), a prominent crag just off the access road (now washed out near the diversion dam). We split up into three groups. Artem, Stuart, and Jens went up the canyon This House of Sky (WI3). Clemens, Steph, Julien, Neil, and Lachlan went to the Valley of the Birds, with many single pitch climbs (a bird smorgasbord as described in the guidebook!). Ian and I went the farthest, to Beowulf (WI4) down the valley to a slot canyon with a 4 hour approach from the camp (yuck!). 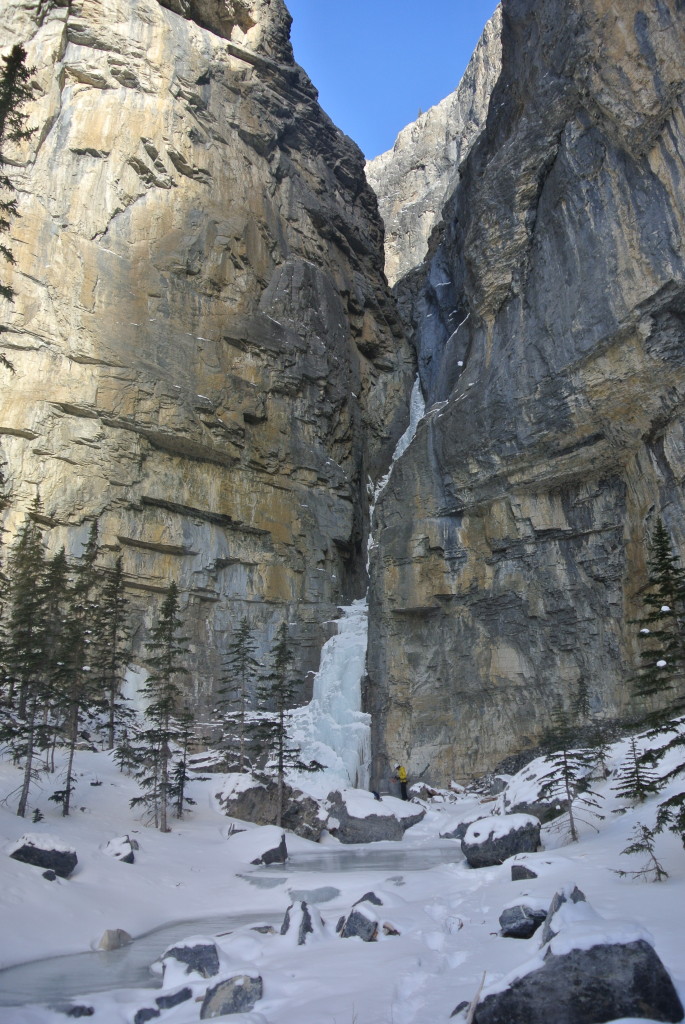 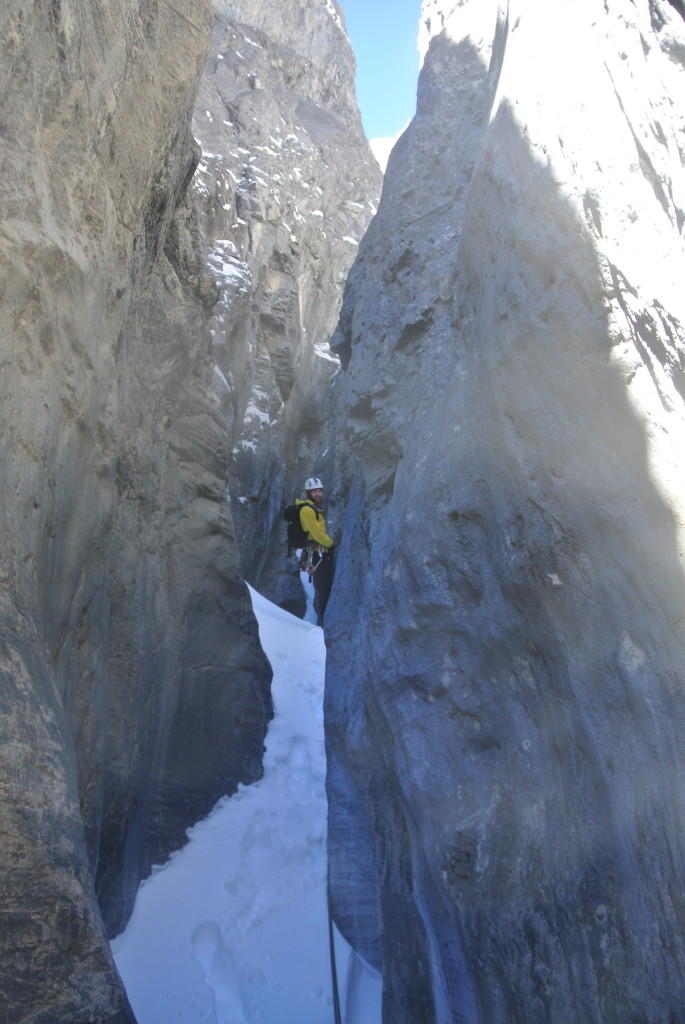 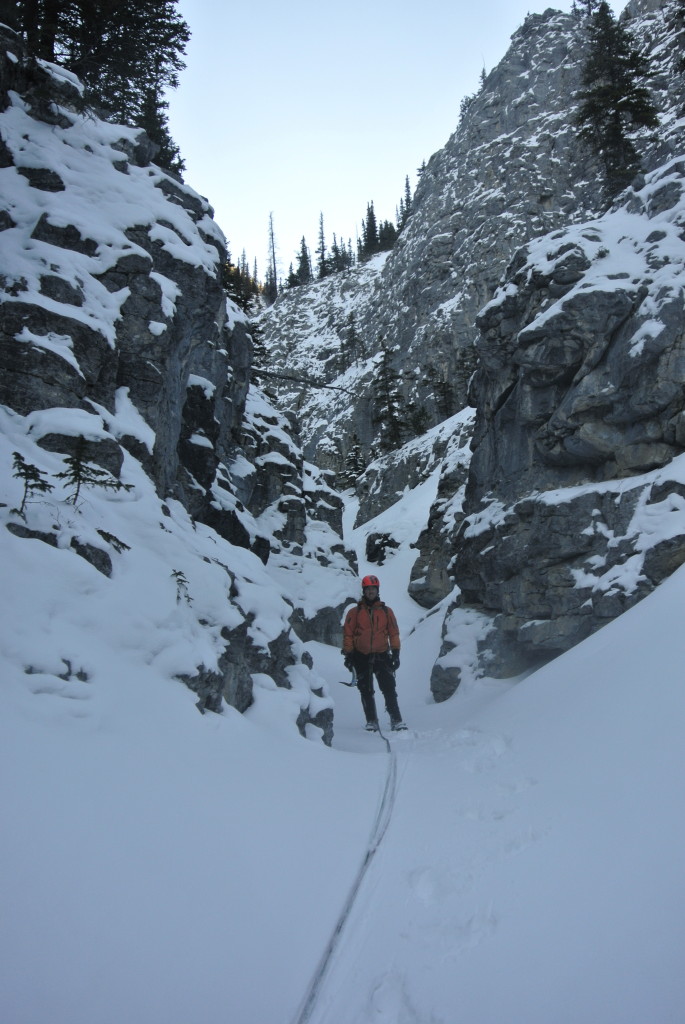 One of several small ice steps

Beowulf was an excellent climb, going up into a slot canyon with the business pitches at the beginning and end. The remainder of the canyon consisted of small, easy ice steps and rambling snow wallowing between. We topped out at sunset (as usual), then rappelled down and slogged back to camp for a long day. The weather had quickly warmed due to a gathering Chinook, with almost comfortable winds at our backs.

The next morning, we again split into three smaller groups. Lachlan, Steph, and Clemens went up This House of Sky, while Neil and Artem repeated the slog to Beowulf. Getting up later, the rest of us went to the GBU (WI4-5). This approach had changed: previously snowy sections were stripped to bare WI1 ice (ie flat climbing). This also included some exciting river crossings – elsewhere you could typically find some stepping stones across the river, but not today when we ran and jumped quickly across the water. We set up a giant top rope on some lines here and spent a nice day cragging in the sun and warmth (around 0C or even above) due to the Chinook. 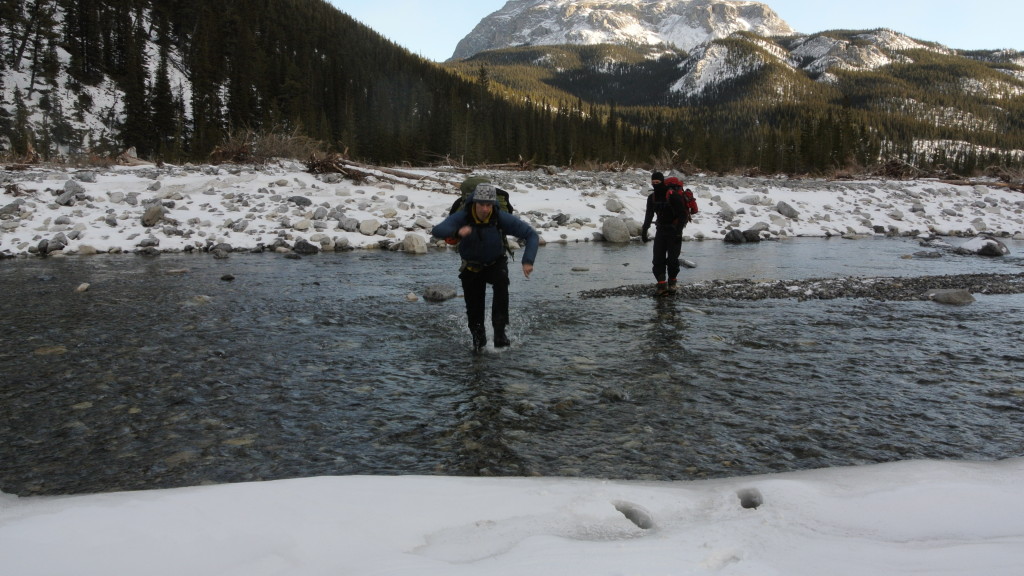 The Good, Bad, and Ugly

On the final night, we were blasted by winds (The Ghost Valley Road Restructuring Program) and I wondered again if my tent would become airborne (spoiler – it didn’t). We left in the morning after massive gear faff and drove to the Big Hill. We found a couple daytripping with a stuck truck, but they managed to remove it without any additional help from us, having worked on it for 2 hours already. This let us know that we could easily drive out of the Ghost, so we parked at the Banff National Park boundary at the South Ghost. We all headed to Sunshine (WI3), where Ian, Lachlan, Artem and I climbed and then went on to Aquarius (WI4) while the others climbed at Sunshine. Escape from the North Ghost. Bag faff on the roof! 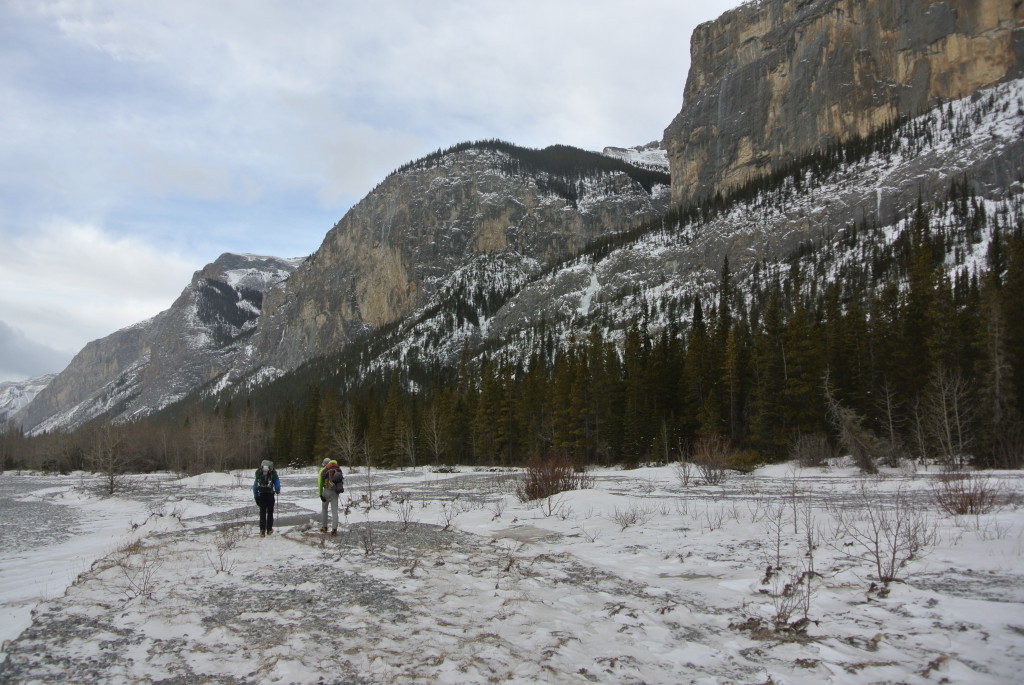 Ian led Aquarious, the aesthetic and only entrance to the Recital Hall, a perfectly circular canyon accessed only by that climb. In the Recital Hall, heinously difficult climbs Rainbow Serpent and Fearful Symmetry come down the walls. This top-out was probably the highlight of the trip for me, a part of the mountains that could not be accessed any other way. 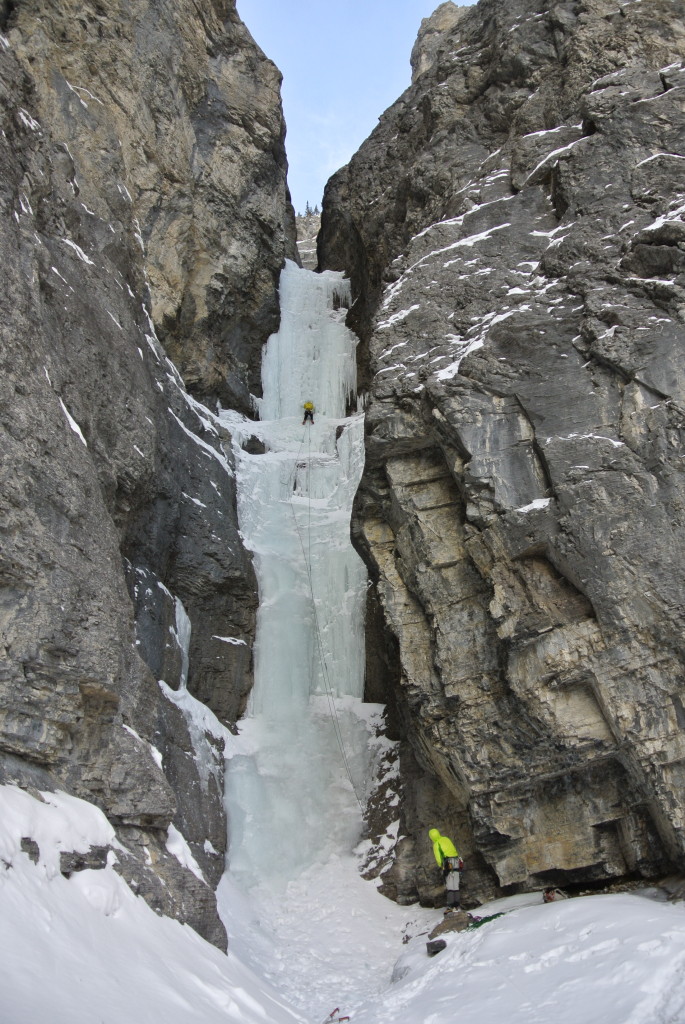 In the Recital Hall, a perfectly circular basin with one exit. Artem and Rainbow Serpent (WI6, next time!) We rappelled out of the canyon and back to the cars (before dark, too! strange….), where everyone regrouped and headed out of the Ghost. We left without any incidents, with Ian and I headed to Christmas Eve dinners at our respective families and the others enjoyed Christmas Eve Chinese take-out on the floor of an unfurnished condo. They would be climbing tomorrow, but my Rockies adventures had come to a close.