Ian had combed through the old ice guidebook and found an adventure behind Yamnuska to Association Peak. One of these routes was a 200m WI3 and the other a 100m WI2, without much more info. Tom, Ian, and I made the approach, sandbagged by the guidebook as “five hours,” starting just before dawn and slogging through snow in boots while pushing through forest.

Around noon we reached Old Fort Creek. The guidebook wasn’t clear which drainage was the correct one for the shorter climb (there was one gully up the creek and another down the creek), but our primary objective was the longer one, so we kept going up the creek. We rounded a bend in the creek and saw the climb: DeMaio’s Dementia (WI3). It was situated right beneath a giant cross-loaded, wind-loaded, basal facet death snow bowl, so we bailed given the avy conditions. 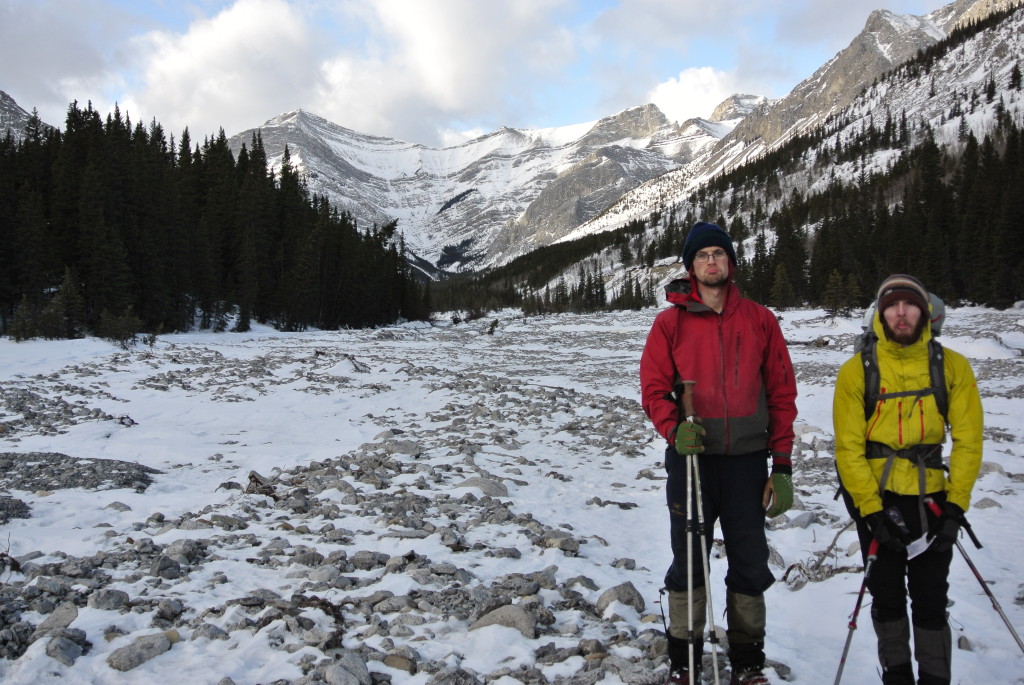 Turnaround! The DeMaio’s Dementia goes right up the centre of the bowl.

We found a great campsite at the base of a creek, complete with a small outhouse and cut firewood (even kindling). We dropped our gear here and headed up the creek. The guidebook claimed 15 minutes to the entrance of a canyon. We postholed through lightly snow covered talus mixed with new flood debris for over an hour to a canyon. Shortly after arriving at the canyon, we found the climb David Thompson Motor Inn, a snowy one pitch WI2. 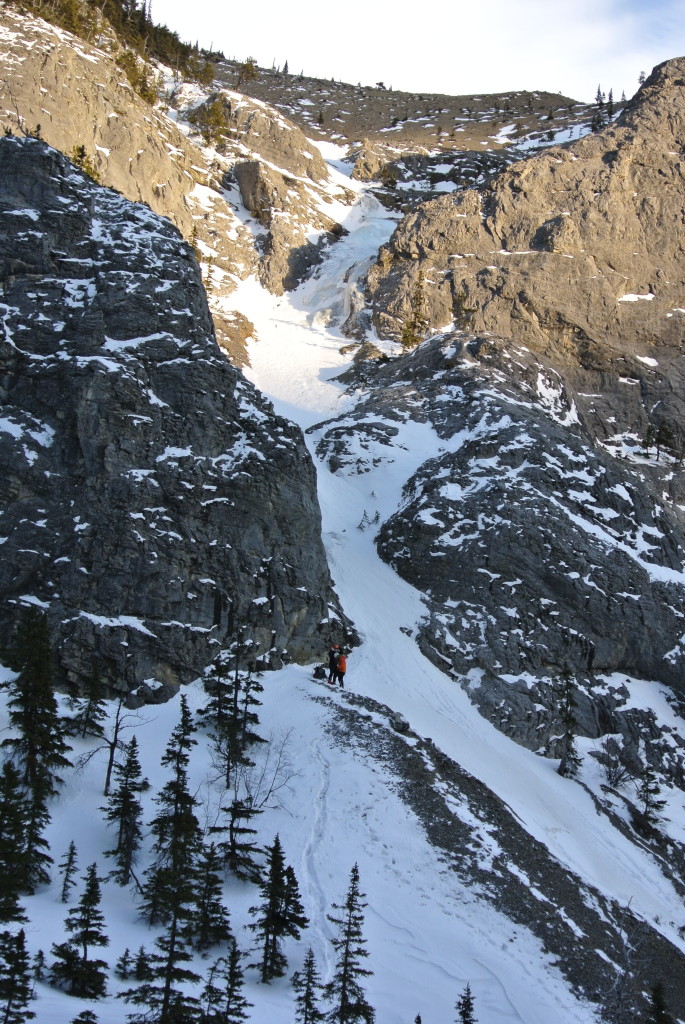 We topped out, decided not to explore the ridge further, then rappelled off a tree in the dark. We hiked down the side the creek and had a great fire. The temperature began to fall and snow started. We awoke early the next day in our 3-people-fit-into-a-2-man-tent, but decided it was still dark and to sleep longer. Over an hour later, it was still darkish, and we woke up the next morning to 20 cm of new snow keeping the tent dark. We began our bootpack out and the temperature started dropping. We then met up with Emily and Leandra in Banff and went for an evening soak in the hotsprings before the girls and Tom headed back to Vancouver by Greyhound.

The guidebook mentioned an unclimbed dagger just beside our climb on Association Peak. It had touched down, but was out of Ian’s league to lead (because, you know, it’s super hard). He posted it to Gravsports forum and at least one party headed out to check it out. Their TR:

Went in today. Ian and his partner are trail breaking machines! They boot packed, we snowshoed. Had to break trail in faceted snow from Old Fort Creek to the climb. 4h30 car to climb. 4 hours out. Bitch of an approach. …ski up the creek from 1A proper. No unnecessary up and down bullshit like the book suggests!

As for the climb: climbing line dry throughout, dripping to the right. This climb is a beast. Climbed 5m and quickly realized I was about to be over my head. Overhangs, brittle, glassy, extremely chandelier, fragile mushrooms, gymnastics climbing and sustained. WI6/6+

Good thing Ian didn’t go with him, could have done the whole approach again to climb nothing! Also, we are pretty much badasses for getting complimented by a Rockies hardman. 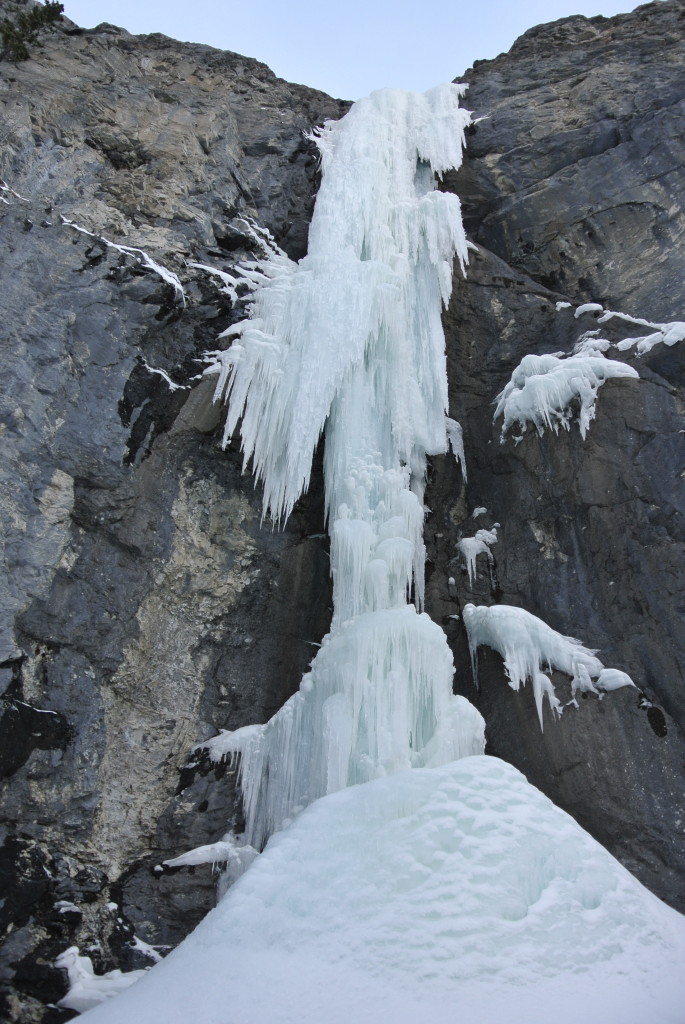 The next day, Ian and I got a late start to Moonlight (WI4) in Kananaskis Country. We got to the climbs after a relatively easy walk just as some other parties were topping out on the climbs. We chatted briefly, with these Canmore locals noting it was pretty chilly out and that they wore double boots (we were in singles). Turns out our gentlemanly starts allows it to both warm up a bit and climbs to become less busy. Ian made short work of the climb and we rapped off in the dark. 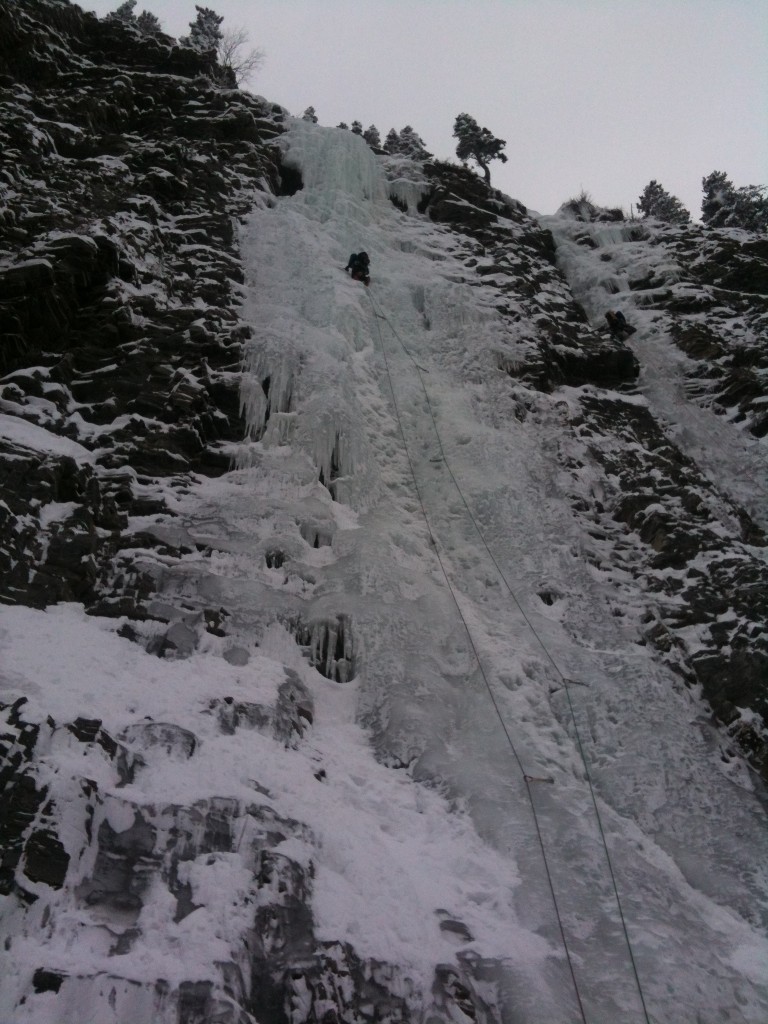 On Moonlight at Evan Thomas Creek

The next day was the last one before 8 more joined us, so we wanted to take an easier day. I needed a new helmet since I retired mine after a bit of icefall, so we stopped in Canmore before heading to Johnston Canyon in Banff National Park. We got to the Upper Falls, but there were far too many people there for us to safely climb and the open areas requiring more than a 60m rope. We went to Bear Spirit instead, just outside of Banff for a total of about 10km walked for only a couple of pitches of climbing before heading back to town to prepare for the Ghost (ooooh, ahhh!).

One Response to Rockies Ice Climbing: Part 2 – The Walking