I arrived in the Calgary Greyhound station weary, and battered. Sleep had come hard, as was typical on such ventures, and the ride from Vancouver was not made any easier by being on the tail end of a flight form Chicago. Sitting in the sterile fluorescent glow of the lobby, I waited to be picked up by Ian and company. After some time, through the door emerged one Stewart Picken, smiling broadly and offering help with my bags. Cramming the cargo into the back of Ian’s trusty Ranger, taupe and filthy from the elements, we set for the airport to collect Elise.

On the ride over, I observed that Ian and Stu had already had a good fill of adventure thus far – clear from their well worn clothes and gear. The truck’s cab clearly carried within it a pervading air of badassery. And just ass. But mainly badassery. We stopped in the airport and waited for a time for Elise to emerge from the gate. In due course, she was with us and we headed on our way, excited to get some cragging in yet that afternoon. It was decided that a spot called the Junkyard would be ideal to get our ice legs, with a mild walk in and short, accessible pitches.

We were met there by Mr. Kevin Martin, to whom I was introduced for the first time. We started to gear up when it was discovered that Elise had no helmet. She astutely pointed out that she needed none, and that the ice chunks had better wear helmets to protect themselves from her. Still, we persisted that a helmet would not be a bad idea, at least for modesty’s sake in the presence of other climbers, and Kevin, Elise, and Stuart headed into Canmore to shop for a bucket. Ian and I headed up to the climbs and got on it. He lead some WI3 pimple and set up a top rope for me. In crampons for the first time in a year or so, I ambled up to the climb with all the poise and grace of a newborn baby deer. With heels high, and skill low, I still made it to the top a happy camper. A few more lines saw the others join us, and we enjoyed ourselves until dark.

That night we drove a ways near Ya-Ha-Tinda ranch and camped in a parking lot near James pass. The next day we awoke to a bluebird day and headed into the hills for a fun day out. We set up ropes on a few climbs and continued to build up our familiarity with a new vertical medium. Unfortunately, many of the climbs were inaccessible to us as they involved a harrowing river fording (maybe– we actually didn’t bother to look) so we opted to head the way we had come from.

We made our way to Banff for New Years Eve. Emily was there with friends and her mum, where they were staying at a youth hostel full of people from all over, but mostly from one place. Dirty and putrid, we sat on a collection of magnificent couches in the hostel lobby zoning out whilst a raucous New Years bash was underway ‘down under’ in the basement. Ian, Kevin, and I made plans to climb Professor Falls the next day, whilst Stuart and Elise would go cragging. Not in the mood for the festivities, and more psyched for sleep, we shacked up in a park shelter nestled in timber behind the hostel complex as fireworks burst in the distance. The next day Ian, Kevin and I headed up the aesthetic and most-righteous Professor Falls which was a deceptively short route for eight pitches. And deceptively drippy; we made it back before dark very moist and in the mood for a drying day. So we made our way to Calgary in order to dry out the swag.

Kevin had to go home, and Elise caught a car share back to Vancouver from a friendly youth in a mini van, so we were now a party of three. We ate pulled pork  sandwiches and baby back ribs. Over our feast of kid ribs, we decided that the South Ghost was the place to be. We went to bed excited for the next few days, and caught some warm z’s next to the Christmas tree. The next day, we packed up the now dry gear and headed for the Ghost. The ride in was bumpy but fun and before we knew it we had arrived. With several hours of daylight left, we crossed the river bed and went over to the WI5 ‘Malignant Mushroom’. It was slush. With the look of a man possessed, Ian stared at the top and walked slowly towards the inverno fungi. It was on. 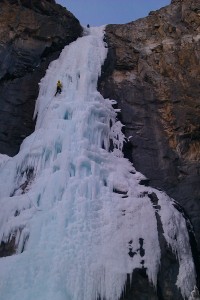 He shot up the big pitch at a steady and controlled rate, taking it easy to not get so tired. Every one in a while, he pushed a screw into the slurpee for a little boost in confidence. Stu and I were both scared. But success was at hand! He made it up and gave us both a belay from the top. The pro was real, real bad but the climbing was super plastic and quite fun. Satiated, we kicked up our heals and made a fire that night and ate our traditional meal of sweet potatoes and jujubes.

The next day we set out for Weathering Heights and Anorexia Nervosa. A really fun hour long or so approach through a boulder field covered in powder led us to WH, a 90m tall and very vertical pitch. It had a strange yellow look to it, like snow not meant for eating. Ian ran up 30m or so of the flow, and made a belay off to the right in a small cave. I followed, and then Stuart, and soon we all found ourselves hanging around at the awkward belay. An awkward, rear-puckering exit out of the cave led to the rest of the climb. Ian went up and I followed second. On this day, the ice was cold and brittle. On my way up, near the top, I heard a cracking sound that filled my heart, and Stuart’s trunks, with dread. A huge Ice flake the size of a largish mini-fridge was coming off. It fell most of the length of the big pitch, past Stu, and produced a most impressive BOOM! I was pretty excited.

We polished this all off with a night mission on Anorexia Nervosa and a 60m long top rope situation on the half ropes, which I have to be honest motivated me further not to peel off (those ropes are stretchy!). Another fire and celebration with sweet potatoes ensued. The temps dropped, and we went to bed in preparation for our final day out.

A reasonable morning start and pleasant walk led us to Wicked Wanda, a WI4 with a midway cool cave feature that involved traversing onto some chandelier-looking features. Today it was cold and standing around at the belays was a little less fun than the no fun it usually is. Stuart seconded Ian up pitch 1, and the nascent sounds of a Scotsman with the ‘barfies was soon resonating throughout the Ghost. I came up and we had a good time on the last pitch, no more hot aches. WW had some of the coolest looking features yet, and had some of the clearest, prettiest ice I had yet seen. A speedy rappel and trot back down to the car and we were on our way out. Thus endeth Rockies Ice 2013-14.