Posted on February 4, 2014 by Angelica Ruszkowski

Advertised as an intro to backcountry skiing trip, this amazing adventure offered experience not only in skiing outside resorts, but winter camping, survival skiing, and bushwhacking on skis! There was so much interest two groups were formed; one ventured to Manning Park while our group travelled to Caspar Creek.

As with most exciting adventures, it began pre-dawn. Gorgeous views of the rising sun from the North Shore and then along the Sea-to-Sky highway made the drive to Caspar Creek a fun one. The perfectly blue skies and sunshine helped set the mood.  The group met at Mount Currie for coffee with surprising punctuality that foreshadowed the congruency and awesomeness of the group. Once assembled, the caravan drove to the trailhead, soaking in the sun-bathed peaks the whole way.

The beginner backcountry skiers were given a lesson on how to put on skins and a then received a quick but critical avalanche beacon lesson. The excitement was palpable, the conditions were perfect! Sunscreen was shared and skins were donned. With shockingly little faffing, the group managed to get from the cars and onto the trail! 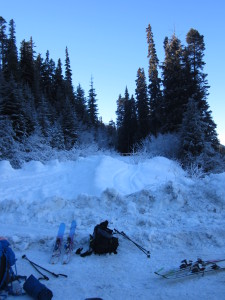 At first following a nice, open logging road it was easy going. Delayering happened after only a few hundred metres; the sun was warming us nicely and it was a slow but steady climb up. 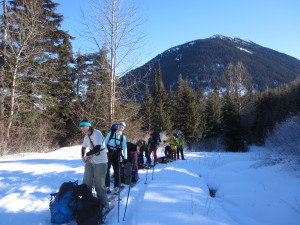 Delayering, warm from the beautiful sunshine!

We progressed onto a narrower logging road, but it was still a nice clean trail leading the group past beautiful views. 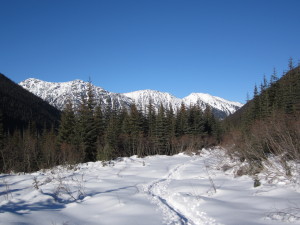 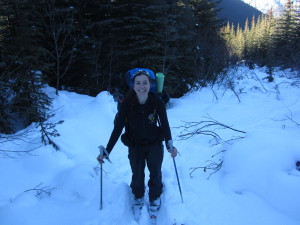 Having a blast in the backcountry!

After a quick stop for lunch, the group trekked on. We passed a couple avalanche-risk areas which were really quite imposing for a beginner backcountry skier. Seeing the power and potential force of the giant face of snow above me, I definitely picked up my pace to cross the area quickly. It only grew warmer as the day went on, but the snow had a very beautiful 3cm layer of Hoar Frost which I was seeing for the first time. It made the greatest sound when swiped with a ski pole! 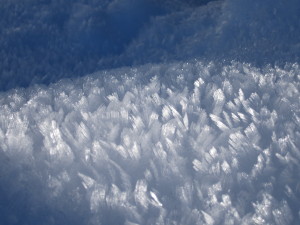 After a while the excitement of the trek increased as we got into some bushwhacking! The logging road wasn’t as nicely maintained all the way, and we had a fun time wrestling with the alder trees that were attempting to reclaim the road. It was interesting trying not to get skis and poles tangled as your pack is getting caught on every branch! At times the traverse was quite tricky since the top layer of powdery snow was resting upon tree wells, so if you tried to use your poles for support they’d just sink down to their handles! The bushwhacking slowed us down significantly and we ended up deciding to make camp at a location not quite as far as was planned. The campsite was situated in what seemed like a mountain hug, the stunning peaks at all sides were comforting and breathtaking. 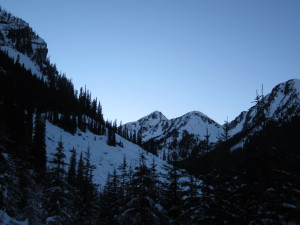 We set up camp: pitched tents, our leaders dug out our lavatory, and we made our kitchen table (this was new to me, and such a cool idea! Just a rectangular trench, but so practical!!). As the sun was setting, we had an exercise in emergency response, make-shift toboggan-making. Some impressive engineering skills and medical expertise were displayed as people constructed a toboggan for a hypothetically-broken-legged victim using skis, avalanche shovel shafts, a backpack, voile straps and tent ties. This was followed by an awesome VOC family dinner around our snow table. Again some VOC members showed off their diverse skills: the culinary talent of some members was astounding! Dinner was a great time to get to know the fellow VOC members. My favourite part of these trips is always the inspiration I get from talking to other (significantly crazier) VOCers; everyone has had such amazing experiences and shared fascinating perspectives and stories.

The night wrapped up in song: beginning with a multicultural rendition of Happy Birthday (5 different languages!) to celebrate one member’s special day, Cailtin’s songbook then made an appearance and we spent a good couple hours singing a good number of classics. Before bed, we also took some time to soak in the absolutely stunning night sky and do some stargazing. The Milky Way was vivid, as were a few planets, the Dippers, Orion’s hunting escapades, and Cassiopeia’s vanity.  A perfect end to a perfect day.

We woke up the next day at the reasonable hour of 8 o’clock. We all huddled around our camp stoves and cooked breakfast and made tea. One member even brought a fancy coffee maker! We decided we would hike for two hours up the mountain to try and find some turns and aim to break camp at around 2. We assembled a daypack, got on our skis and proceeded up the mountain through a forest. Because of the lack of snow this year the trail was through dense woods with little snow coverage. Twigs stuck up everywhere and there were many obstacles we had to maneuver around- involving some very interesting gymnastic moves being performed. 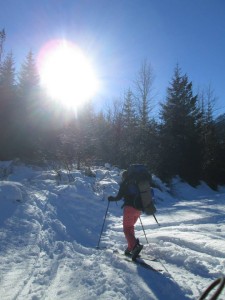 After saving someone from being eaten by a tree (stuck in a tree well) we decided that maybe our taxing hike wasn’t worth it for the low chance of getting some turns in. We decided we would go down and try something else. Most people kept their skins on because of the tricky conditions and lack of snow but a couple of us ventured onto an old avalanche path- trying to find some skiing. We reconvened near camp and broke into a few groups- some chilled at camp, some went on another hike up through some other trees, and a couple ventured up a steeper open slope to ski and potential run (although there were some ominous looking boulders covering it). 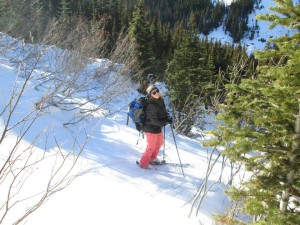 Tree skiing and a rocky run! Despite the lack of good skiing, trekking around and hiking was still fun and sort of like a game- you trying not to fall and the mountain trying to trip you.

It was yet again a beautiful day and we broke camp at around 2 in high spirits. The hike down was a lot faster but encompassed the same ongoing battle with the alder trees trying to reclaim the trail. We hit the loveable smooth logging trail when we all about had enough of falling when our ski got stuck under a branch. We took off our skins and skied down the logging trail as the sun was setting on the mountains. It created this magnificent view of golden tipped mountain ranges and a beautiful dimming sky. It was truly a remarkable ski out. We weren’t ready to say goodbye when we had packed our cars and were ready to go, so we decided to meet at Splitz’s Burgers in Whistler for dinner. Wow, was it good. All of us got various delicious burgers, that probably tasted ten times as good because of our exhaustion from the outdoors and from touring all day. What a rewarding way to end the day! All our smiling happy faces formed a circle and said goodbye to a wonderful group and great trip! Special thanks to Chloe Williams for organizing! It was a fantastic trip!