Posted on February 2, 2014 by Marie-Eve Myrand-Lapierre

On the weekend of 11-12 of January, a snowstorm convinced some VOCers that going on fancy backcountry skiing trips wasn’t a good idea. But staying home? Really, that’s a possibility? Instead of losing our time by sleeping, studying, cleaning or whatever other boring stuff you do at home, Diego had the brilliant idea of organizing a trip to practice our emergency skills. So, some VOCers went for a daytrip to Red Heather, some on Saturday and others on Sunday. On Sunday, we splitted up the group in two teams of four. My team was composed of me, Diego Ribas-Cadle, Jim Richardson and Jens Vent-Schmidt.

We started by two rounds of beacon search with multiple burial. Some mistakes were made for the first set. We realised how taking one more minute on the fine searching could save some precious minutes when you don’t dig at the right place. The second set, based on the observations of the first one, was way quicker and efficient. When we dug out the last “victim”, we found out that the poor backpack had a broken leg. I enthusiastically volunteered to replace the non-sociable backpack to act as the victim!

First, Jens made a primary and secondary survey. He found that only my leg seemed to be affected. Afterward, Diego assessed if my spine was injured. The test he chose to do was the “poking” one. In short, he poked me at different places (forehead, hand, legs, etc.) with a sharp and dull tool and asked me what I felt. When there is a mixed up with my answers it means that something might be wrong with my spine. Everything was fine, so they set me in the resting position to do a secondary survey on my spine. Once again everything seemed good so they concluded that the chances that I got a spinal cord injury are very low. Thus they carefully moved me onto a sleeping mat to get some comfort and insulation. Once I was on the mat, they covered me with an open sleeping bag and an emergency blanket, and use backpack as a pillow. It was quite nice and warm. Note to the rescuers: when you do stuff or move above the victim, be careful to not throw snow in the victim’s face!! 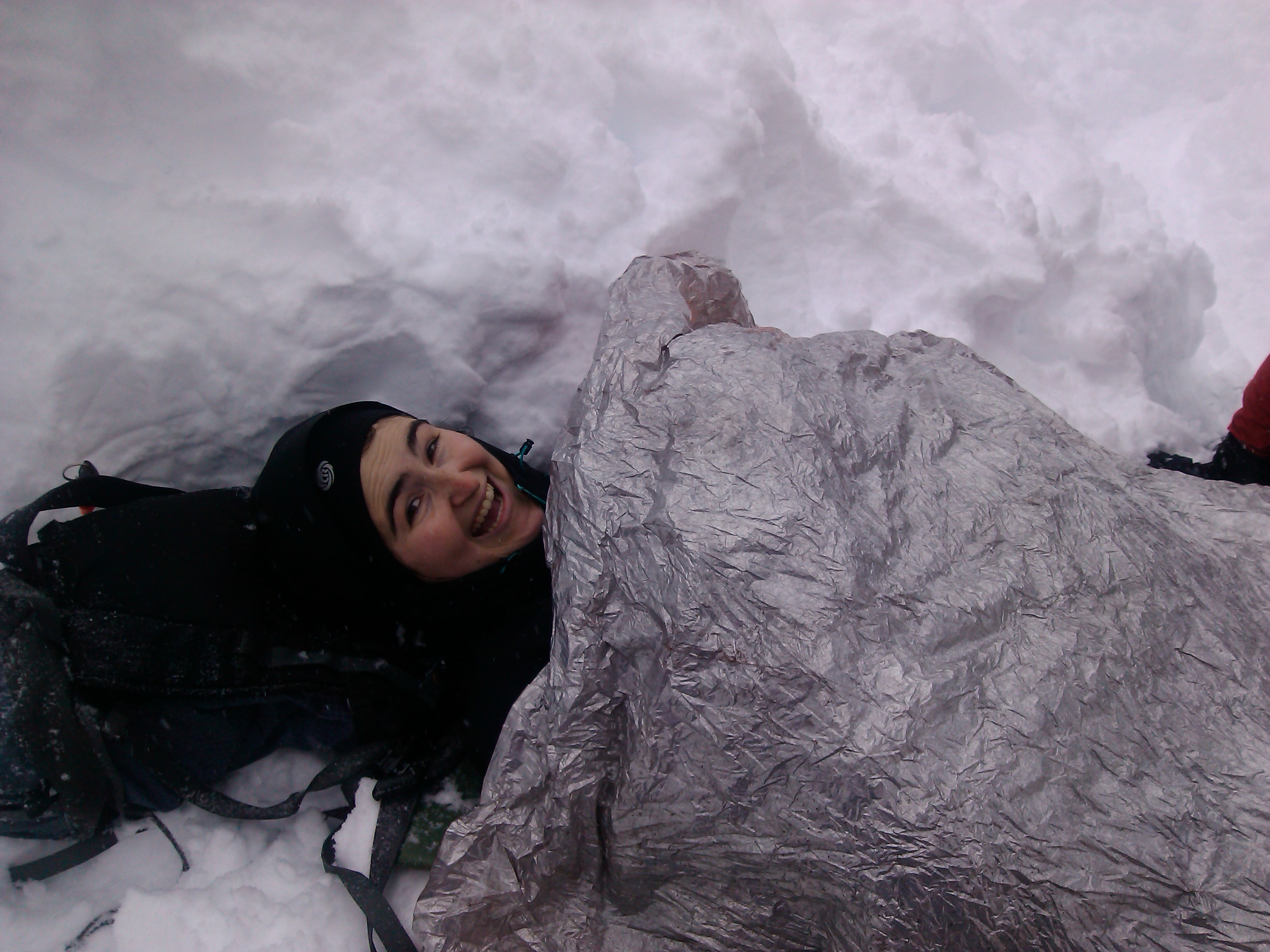 After I was comfortably installed, Diego started the sled construction. It was composed of only skis, voile straps, poles and probe. The probes were installed in a “X” configuration and retracted ski poles and shovel handles were used to solidly join the two skis together. 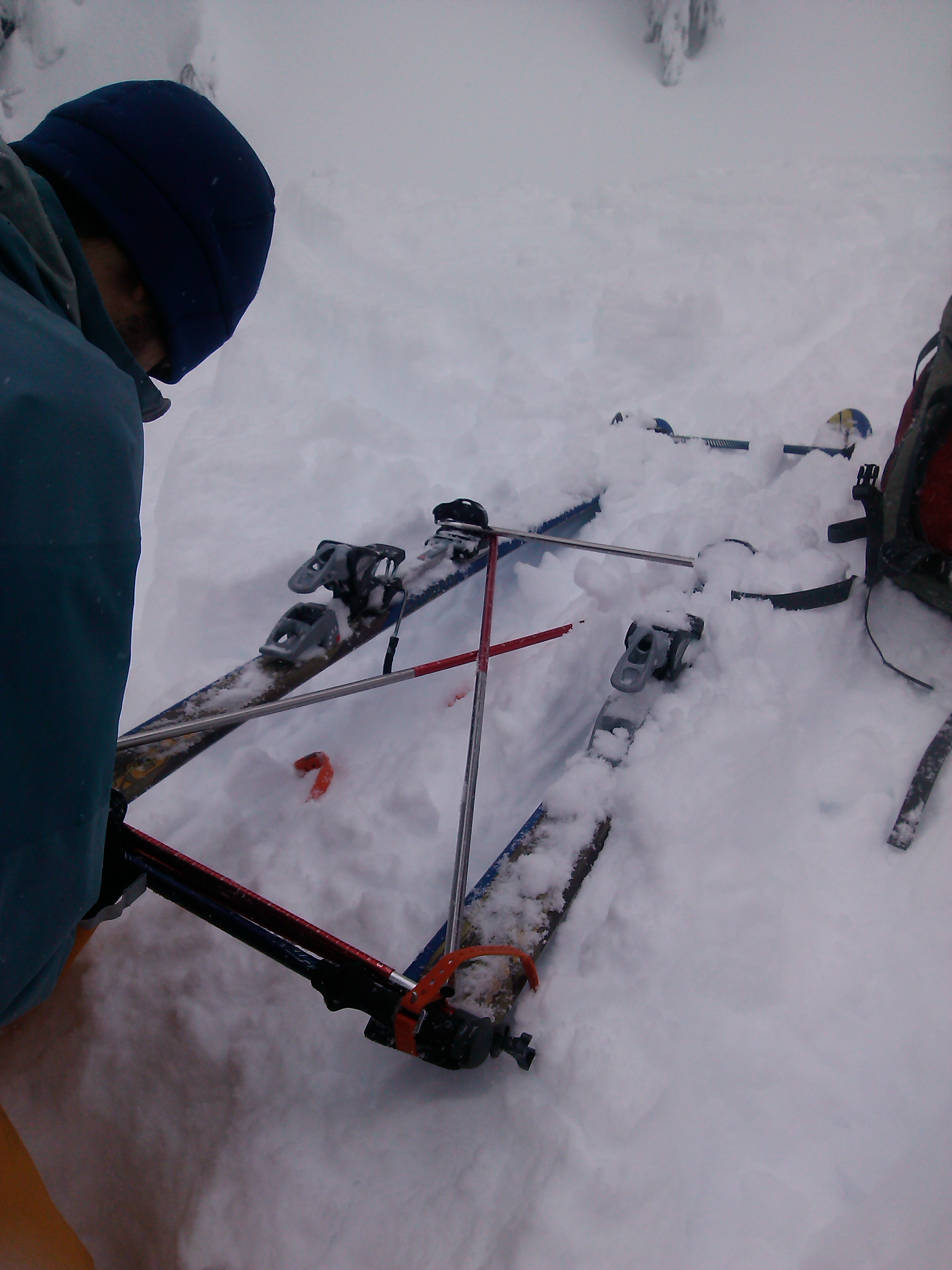 Once the frame was done, Jens added a shovel blade in the front to help the sled to break trail. Afterward, they added a backpack for more insulation and to give me more protection. The result was simply amazing! 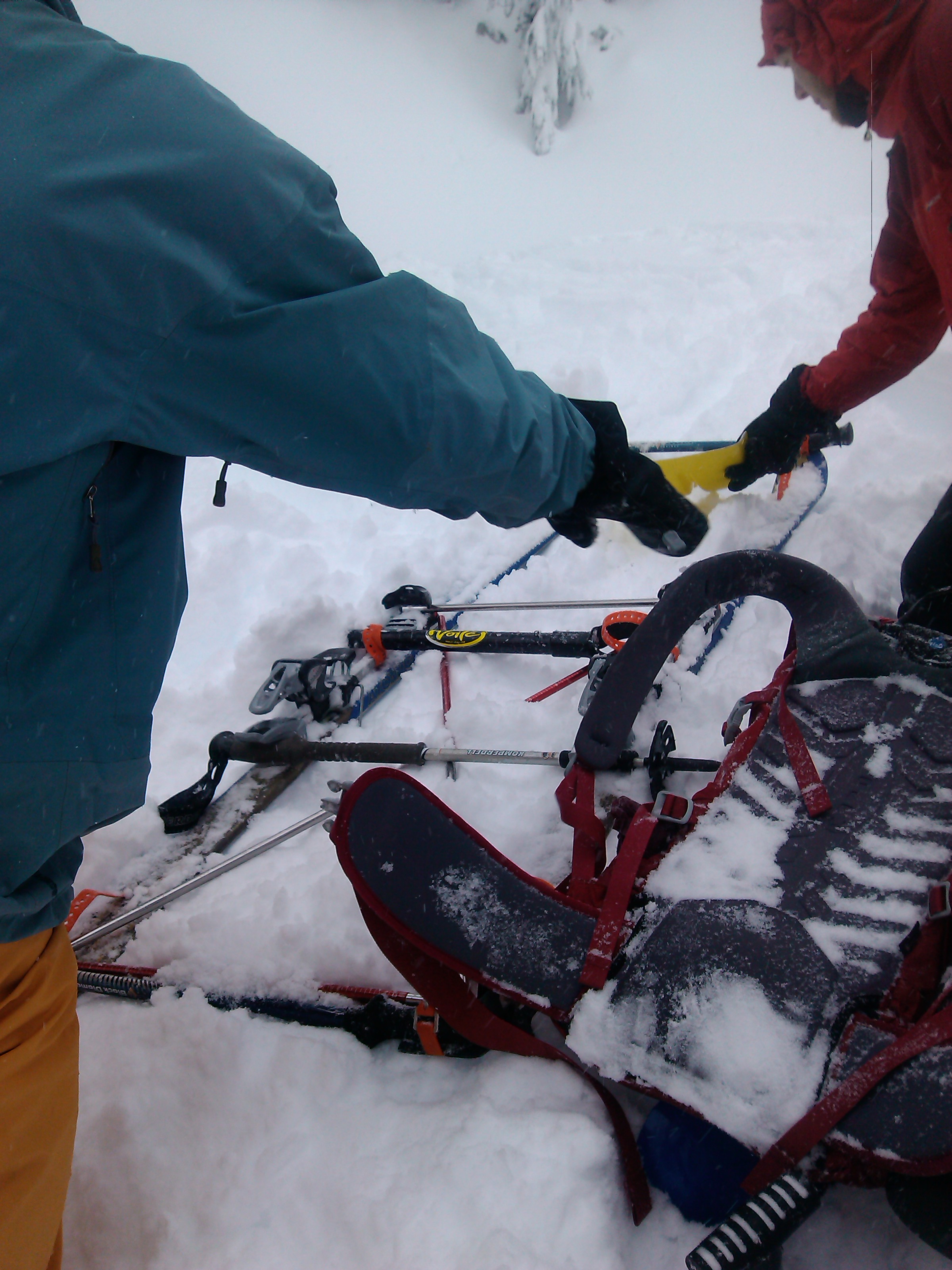 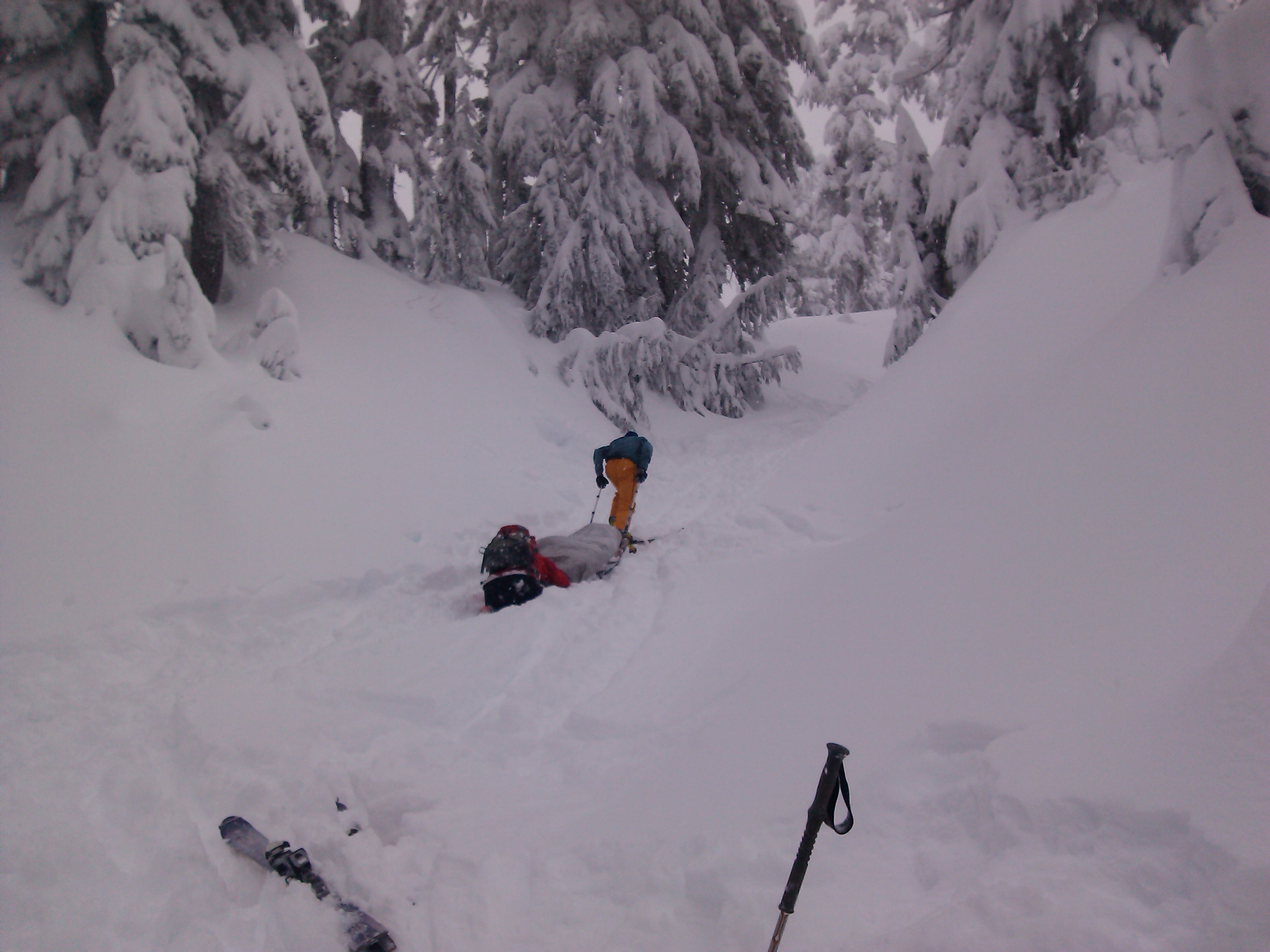 I quickly started to feel myself sliding backward… The skins didn’t stick properly and I was slowly getting out of the sled. Therefore, they had to attach me again… twice. I think the third time they tried a different technique involving my feet (well, I have no clue what they did since my head was underneath the blanket to prevent the snow from falling onto my face). Whatever they did, it was very efficient and I was nicely fixed on the sled. 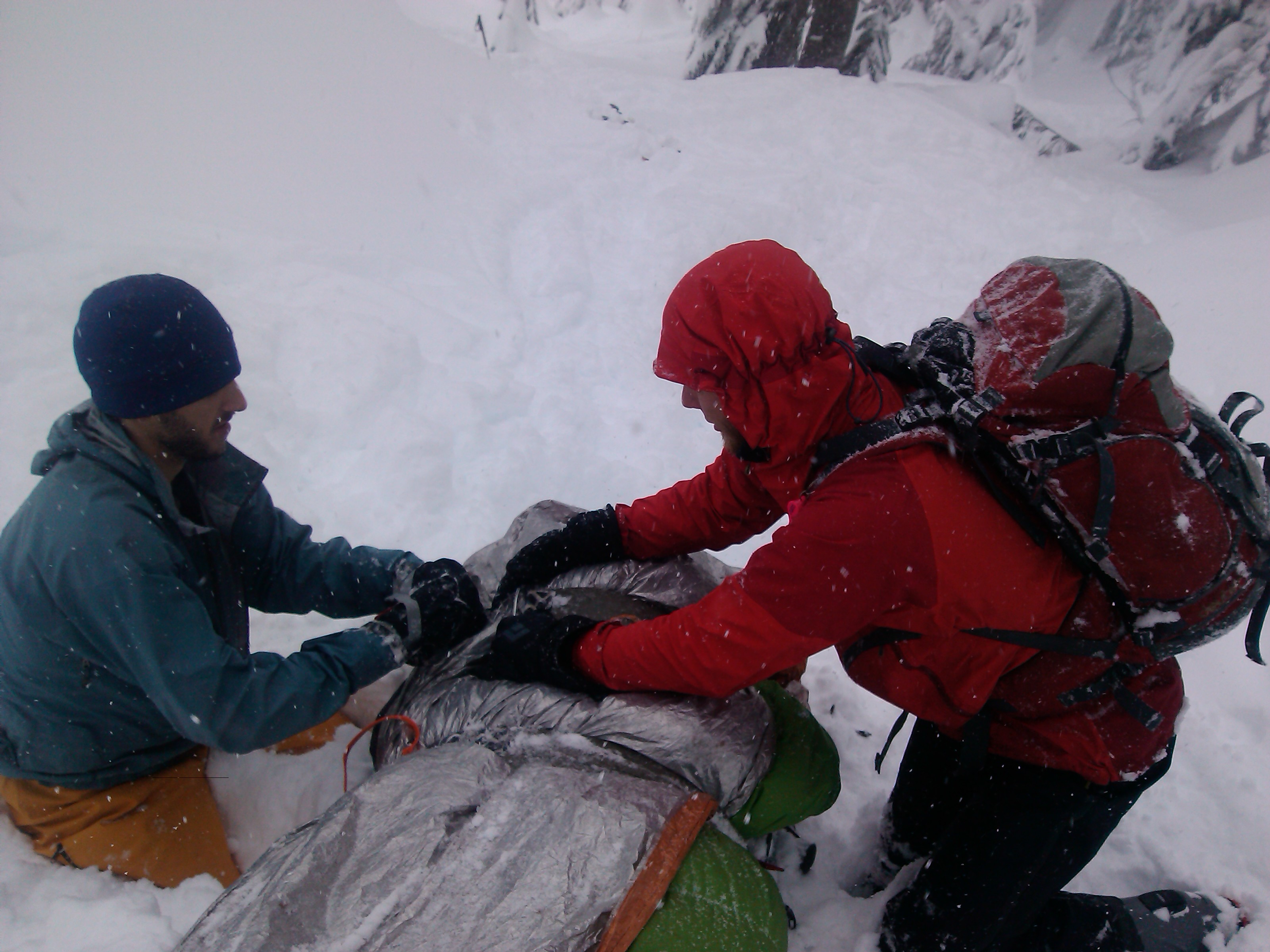 At this point the front of my legs (at the hip level) started to be painful. I was in the same position for almost an hour now. Diego explained to me later that apparently the maximum amount of time someone can stay attached to a sled without having too much pain is about two hours. Now I understand why. This is an aspect to keep in mind about the importance of the rescue rapidity… no pressure rescuers!

My head was downhill and now that I think about it, being in the other direction would have been better. First simply because having my head uphill is nicer, and also because of the proximity of my face with their head while they were pushing behind the sled… 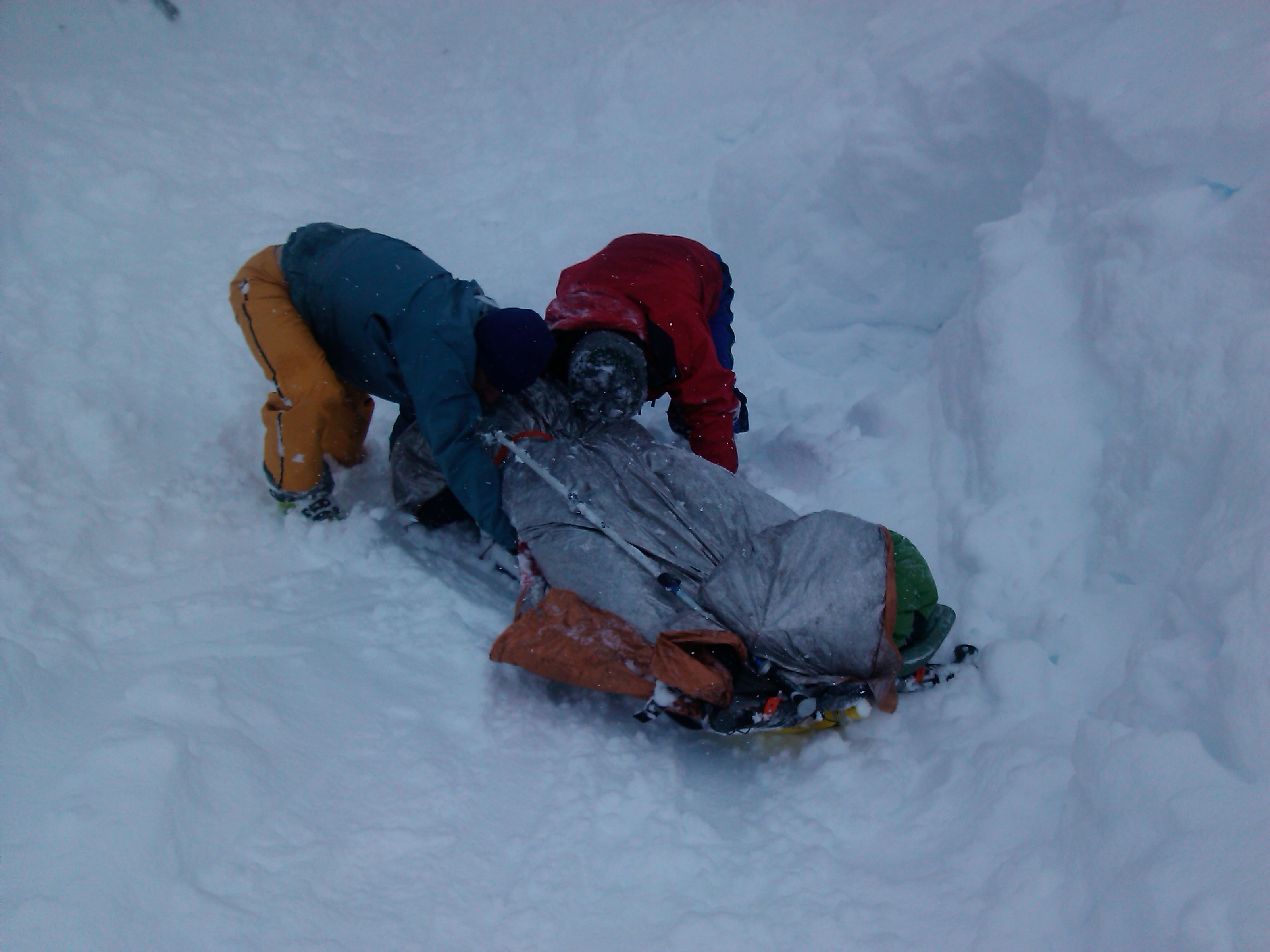 While they tried to get me out of there, it seemed that I wasn’t getting anywhere… The guys had to try different pushing techniques without satisfying results. At this speed, it would take the whole day to get out of the gully. The snow was very deep and the shovel blade wasn’t sufficient. Therefore, Jens took his shovel and started digging out the trail to help the sliding process. It worked pretty well! We finally managed to get out of the gully and reached a spot where the helicopter could get me.

After this great experience, we all realised how important practicing was. It took quite a while before they became truly efficient, and a lot of time was lost on small details. Remember, small details could make a big difference!