Over the weekend, delegates from countries who were members of the Small Carbohydrate Council (SCC) journeyed to Edward’s Cabin in Tetrahedron Park for a meeting that would set in stone the international definitions for each Small Carbohydrate (Biscuits, Cookies, Cakes, Pies, Muffins and Cupcakes). Though the main purpose of the meeting was to be on the legally binding definitions of small carbohydrates, it was decided that:

1)   There shall be skiing and climbing involved so as to provide sufficient blood flow to the delegates’ brains during the meeting.

2)   The meeting shall have regular whiskey and haggis breaks since it falls on the Robbie Burns Day and Australia Day (Someone really screwed up the scheduling on this one).

3)   At the final conclusion of the meeting, there shall be a friendly game of cricket which must be played on a white surface.

4)   With the exception of the Haggis, all consumables must be deep fried in oil. 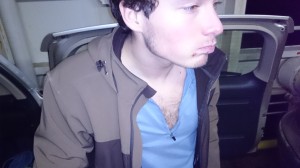 On the Friday, Artem, Diego, Andrew and myself drove to the trailhead where we skinned up the trail in the dark. We had flung our gear all over the ferry deck and had been eating large numbers of Baby Mum-Mum crackers for dinner, as per Artem’s request to buy “funny food”. At the trailhead a complete lack of snow made us uncomfortable about being in avalanche terrain where any slide might cause an ice crystal to get caught in an eye. This was the first time any of us had skied in June-uary, and not being familiar with the conditions, we were naturally cautious. However, we brushed the danger aside and continued on into the dark, arriving at Edward’s cabin at 12:30am.

Artem, Diego and I had been planning on climbing Tetrahedron the next morning, so setting our alarm clocks for three hours later, we got some shuteye. We awoke ready to go, yet my blisters from the skin up had slowed me down significantly. So, not wanting to slow Artem and Diego down, I decided to sit Tetrahedron out, go back to sleep and wait for the other party to arrive in the morning.

A beautiful day of warm sunshine woke Andrew and myself. The other party full of Australians, Canadians, Scots, French and English skinned up the trail where we all faffed around in the warm sun and decided to skin up Mt. Steele.

Natalie with her new and improved bindings (Photo by Natalie Makepeace)

Again, the lack of snow and previous weeks of sunshine made for an icy skin and descent. Natalie had made herself a binding out of Voile straps as she had lost her other boot somewhere on the way up. It was surprisingly effective and she motored up the slope along with everyone else. We arrived at a saddle as the sun was descending into the fog on the Georgia Straight and proceeded to slip, slide and survival ski down the bulletproof ice crust back to the cabin. Everyone slowly trickled back in, while Neil and the others began to boil the haggi.

Artem and Diego eventually returned from Tetrahedron reporting similar icy conditions on the ski down and a decidedly average climb. Although fun, it proved to have a terrible slog-to-climb ratio. And the assortment of gear (read: cams, nuts, tricams, screws, crampons, pickets, ropes) served as dead weight as they dry-tool scrambled up the West Buttress. The route did yield some bomber turf placements, which would’ve made Robbie Burns himself proud. 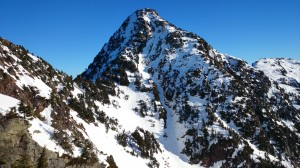 Neil, as per Scottish tradition, held a quivering haggis in his hand and, with an ice axe in the other, recited an ode to all Haggi before swinging the axe down into the Haggis. At this point the meeting was to begin. 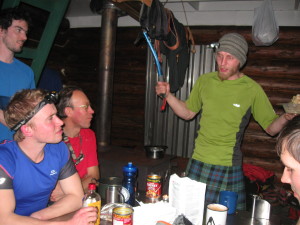 Whiskey was consumed in large quantities in between huge mouthfuls of haggis and after a while the delegates began to discuss the original purpose of the trip. However, what first began as a simple discussion as to the legal international definitions of small carbohydrates, quickly escalated into a heated argument. Haggis was flung, threats of torture by eating baby food were uttered and there seemed to be no peaceful conclusion to the mess of a meeting. 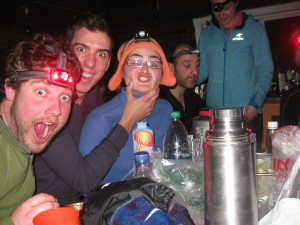 The argument got very heated (Photo by Marie-Eve Myrand-Lapierre)

After agreeing that a biscuit was by definition a small carbohydrate that is dry, terrible and sweet and a cookie is a small carbohydrate that must always be round and sweet, the delegates though peace was in the cards. But then someone mentioned the word “cake” and all hell broke loose again. In fact, the argument between the SCC delegates became so heated that there was talk about World War 3 being fought with cakes, cookies and exploding jelly donuts. This argument went on for at least two hours, and although the SCC did not reach consensus, there was a general agreement to take the talks to the HCC (High Court of Carbohydrates) to deal with the matter. The outcome of the decision now rests with the HCC and they are currently reviewing the facts (such as cookies having to be round) before proceeding with a final decision.

The discussion clearly took a huge toll on some of the delegates as they immediately demanded more whiskey, but it had all been consumed. In a desperate cry of desperation for drink, Neil and Artem nearly resorted to drinking white gas yet were persuaded not to by the rest of the delegates. The meeting hall was left a mess, with exploded haggis, half-half eaten candles and empty whiskey bottles strewn everywhere. 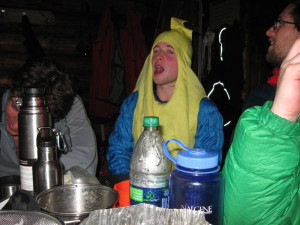 When I woke up to the warm sun, I looked down in astonishment as I saw someone had turned me into a banana. I can only guess that it was one of the Australians since they had only recently recovered from “Peak Banana” where banana prices had sky rocketed and left the whole country in a huge potassium deficit. I was wary the whole day that one of the Australians was going to try to eat me, but I realized I was probably too small to be of any real benefit to them. 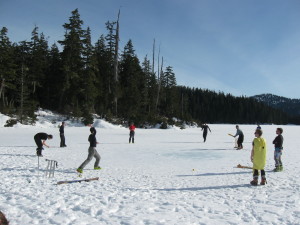 As part of the agreement, Artem and I also had to consume baby food, which consisted of a Turkey and Vegetable pureé that tasted slightly of ass. No wonder babies are constantly crying.

Though we had not come to an agreement within the SCC as to the definitions of small carbohydrates, there was the requirement to play a friendly game of cricket on a white surface. We skinned to the nearby lake, set up the cricket pitch on the frozen surface just to satisfy the potassium-deficient Australians and basked in the warm sun of June-uary…. sun’s out, gun’s out style.  Near the end of the cricket game we forgot the final rule of the council meeting: to deep fry every consumable. We quickly overloaded a pot with oil, heated it and poured the rest of our food into the scalding pot of fat. After our arteries were feeling full, we packed up, skied out and arrived at the car where a pair of my old, unwashed socks I had forgotten had melted a hole in Artem’s car.