There exists a legend of a treasure hidden away deep within the mountains of the Sea-to-Sky. It is a treasure as old as it is valued. It is a treasure of gold: liquid gold: liquid pleasure: BEER. Rumors echoed through the VOC, and a group of travelers rose to the occasion. Taking direction straight from the tale, they planned a course to the Brew Hut, determined to locate the fabled mountain-brew.

The morning was of typical Vancouver grey, but we weren’t deterred. We couldn’t be. After stopping at Tim Horton’s as per tradition for much needed coffee and second breakfast, we continued on into the impeding wet. The trailhead was as soggy as could be expected; water bars flowed like rivers and at points the road was more puddle than passable route. Eagar to escape the cold that comes from such rain, we loaded our packs and set off with minimal faff interference. It’s curious how weather can do that. 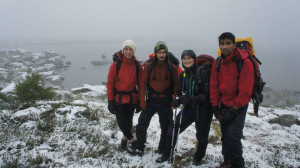 Our large group fragmented into smaller units. The quicker and more experienced moved swiftly into the trees and vanished behind the first mass of boulders, their speed presumably inspired by the comfort of shelter and drink that awaited. The slower were left to ponder what crazy whim drew us out on such a morning as the last remnants of dry were washed from our skin. The mountain beer had better be worth its legend.

Regardless of pace, all hiked the same trail and through the same weather. We moved from rain, to sleet, to snow, to blizzard.  Once stable rocks became slick with dust and eventually disappeared altogether underneath a blanket of white. The winds picked up and threw angry crystals in our faces. Visibility was poor and had it not been for those breaking trail, some of us might have been lost (though there were several individuals with GPSs – always prepared, they are!). The wind was strong and the snow fierce, but they still were not quick enough to cover our forerunners’ tracks. We followed them religiously to Brew. 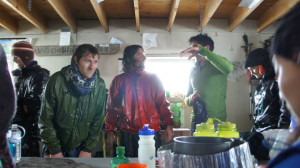 Nearly everyone arrived at the Hut soaked. The few who weren’t, soon surrendered their comfort to the elements as we headed once again into the storm to collect firewood. A few large logs and many smaller twigs were gathered before people lost morale for the effort; it was certainly a new experience to go swimming without the use of a lake or similar body of water. We then decided it was time to hunt down and enjoy some of the legendary Brew beer. We had paid our dues. 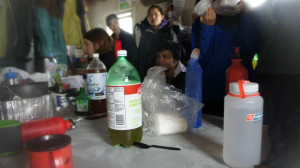 The storm raged on, but it soon faded into the background as food, company, and the glorious liquid gold took our focus. The beer was particularly enjoyable and between cards, drinking games and conversations that, in any other context, would be far too awkward, the supply waned. Once the beer had dwindled, everyone found themselves in a state of sleepy contentedness. We drifted off curious as to what the morning’s weather would bring. Was sun too much to hope for?

Of course it was. The weather was roughly the same as we had left it the night before. No one was terribly eager to brave the mountain’s anger, but with our supplies (of beer) gone, we had few other options. Though soon enough, we were out of the blizzard and back into the typical Pacific Coast rain. At the cars, we packed up and decided grab some food along with a final celebratory beer in Squamish before returning to our dry city lives; at least there we would finally be out of the rain (ha!). 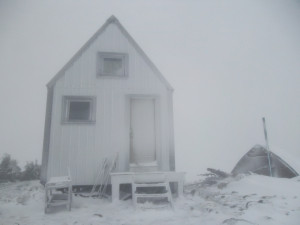 A very special thank-you to (Super) Jens Vent-Schmidt for crafting such a wonderful batch of mountain beer and for allowing us to consume nearly all of it. We missed you on this trip but are very grateful for your efforts. Thank you!