Saturday night after Son of Rock, I went to sleep with two nagging questions in mind, both concerning my newly purchased “vintage” racing kayak. One, will it float? And two, equally important, will it stay upright?

Rewind to Thursday same week. A friend of mine tipped me off about an ad in the almighty Craigslist about a Necky Phantom for sale for $250, in Whistler. Sounds like out of a bunch of interested people, I was second, and since the first guy didn’t pull the trigger, I was it. All I really knew is it’s an old school carbon-kevlar racer, 19.5 feet long, and 17 inches wide. So roughly 75% the width of a normal sea kayak. I wasn’t sure if I’ll manage the tasks of keeping it upright AND moving forward, but for the price, it was worth a try. It also had 2 severe-ish cracks in the bow, hence the price. Me and that boat are alike in 2 ways. We’re both cheap and both have a long nose. I came up with a creative solution for the repair, but didn’t have time to touch it until the night after Son of Rock. Which also happens to be the night before Tour D’ Indian Arm, one of the longer local races. In the few hours between getting home and going to sleep, I managed to complete the structural repairs and hoped the epoxy will cure by race day.

I got up early, and with the repairs still very tacky, figured I’ll finish the rest of immediately needed work and hope it’ll be ok by the time it hits water. Arrived at Deep Cove with just enough time for the final adjustments and brief test paddle before committing to a $50 race entry fee. As I was crawling backwards out of the boat after adjusting the footplate(home-made 90s technology?), this lovely middle aged lady comes up to me and asks “didn’t they do away with closed cockpits for racing boats”? To which I replied “this one is old…”  This was turning out like taking your dad’s backpack from his college days on your first elementary school camping trip. Then she said ” this reminds me of the Necky Phantom I paddled a long time ago”. Finally, recognition! maybe this boat is actually a great classic of some sort. “It IS a Phantom” I replied. “No way, really?! That boat was horrendously tippy!” Oh.

Finally, I got it to the water and recognized a major conspiracy that boat designers from the 90s came up with to keep racing boats for those with a natural born elite sense of balance (and away from people like me). It has a super short cockpit and a high back deck, meaning you have to sit on the back deck and go in feet first. Which is easier said than done when you need to do it while afloat in a boat that doesn’t want to stay upright. For the first time in my life, I asked for help getting in. And later for help getting out. Once in, it was actually comparable to a modern racing surf ski for the intermediate paddler. Phew. I signed up for the short course, 10k instead of the 17k long course. While the initial impression was good, I wasn’t sure how well the relationship was going to work out. I ended up as the only one in the men’s high performance class doing the short course, which on completion made me a winner of sorts. Or a loser of sorts. The race went well, for having not done it in ages. Racers seemed to have broken up into 2 main packs, with me in the middle between them. On the way back, headwind started up and became something of a nuisance to me and a bigger issue to stand-up paddleboarders, who catch way more wind than us kayakers. I have a new found respect for those guys by the way. They seem to be getting faster every year (and no I don’t actually get slower) and this year, there were a few of them well ahead of the regular and fast sea kayaks. Hella impressive to me since, every time I tried, I spent most of my time on a paddleboard trying not to fall off. By the end, a double almost caught up to me, but I managed to hang on. After which I proceeded to embarrassingly fall out of the boat while trying to get out of it on my own.

By the time people got off the water, the crew at Deep Cove had a bbq going and burgers ready to go, and man does food ever taste good when it’s free after a race! And a couple sponsors had free drinks, one that was supposed to be all natural, and one that had all sorts of funky artificial-sounding ingredients. They were equally free and consumed all the same. Laura from Western Canoe & Kayak won 2nd place on her stand-up board and was also happy to finish and enjoy the sunshine.  In the raffle, I won a t-shirt and a fancy pair of high-performance underwear, which almost paid for the entry ticket, and brought cheer of relief to the crowd that someone else won the underpants.

A good day had by all.

P.S By this point I thought that public nudity is a sort of a domain of the VOC and nudists. Until I got a full moon view of a fellow paddler changing in the middle of the parking lot as I was loading my boat. I guess some things in life are inescapable. 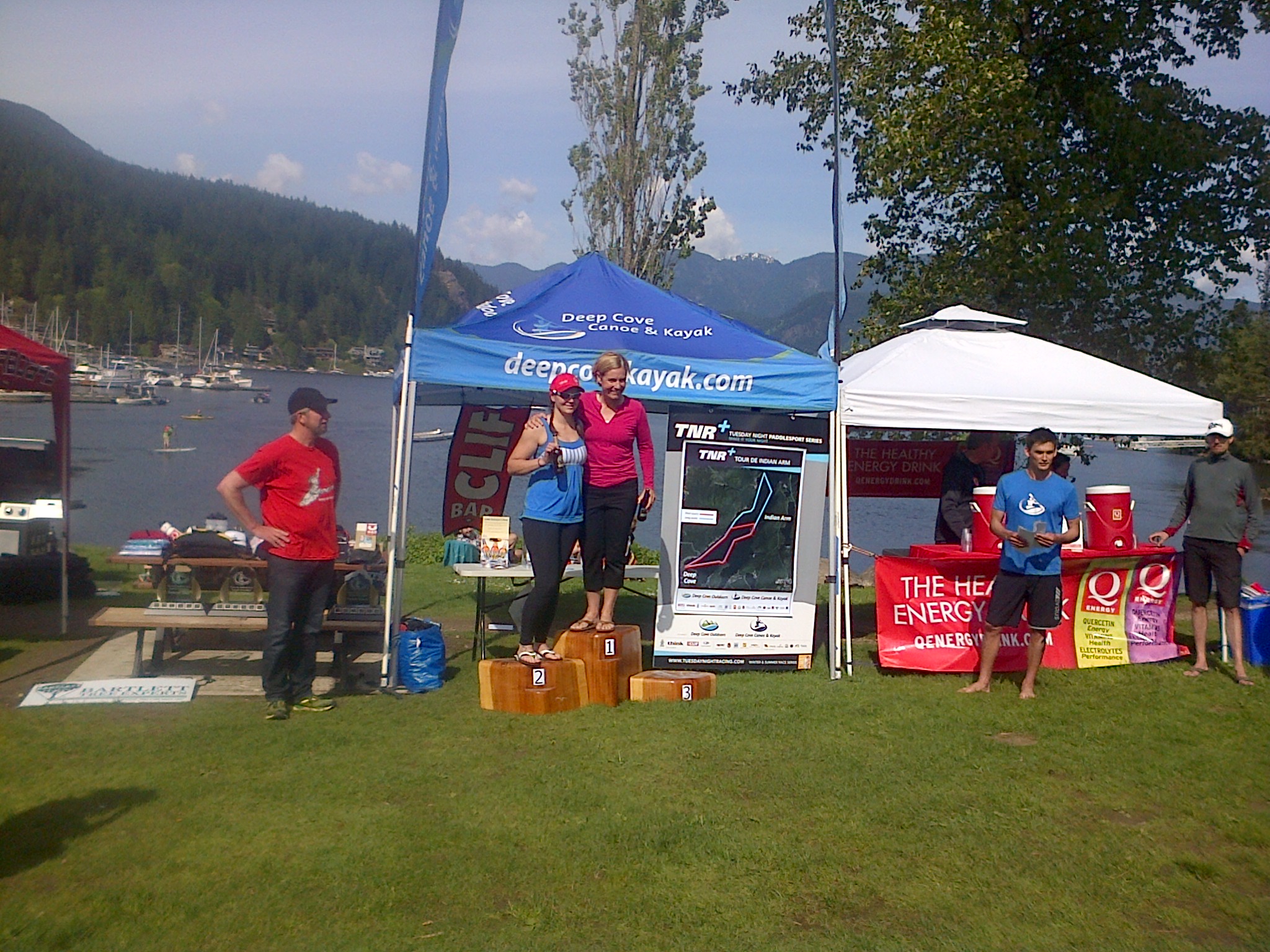