Trip report by Crystal To.

Being native to what most VOC’ers consider a foreign suburb (Burnaby), I was fortunate enough to be picked up at an ungodly hour by Martin the Skier (there were two Martins on this trip), who hails from the even more distant Surrey. We met with some others at Ben the Skier’s place (there were also two Bens on this trip) and off in Derek’s minivan we went. It’s a sunny Saturday morning. We soon arrived in the Rubble Creek parking lot to begin our adventure. I wasn’t quite sure what I was in for, this being my first overnight hike. Nevertheless, this trip had been labelled “beginner-friendly” which I hoped to be a good thing.

It’s a friendly well-maintained trail that switchbacks up to Taylor Meadows, and the snowline didn’t appear until we were about 2 km from the campground. We stopped for lunch on the way, and the whole hike wasn’t too bad (albeit a little dull in the scenery aspect). Whoever set the pace set a brisk one as we finished the hike in about 3.5 hours. 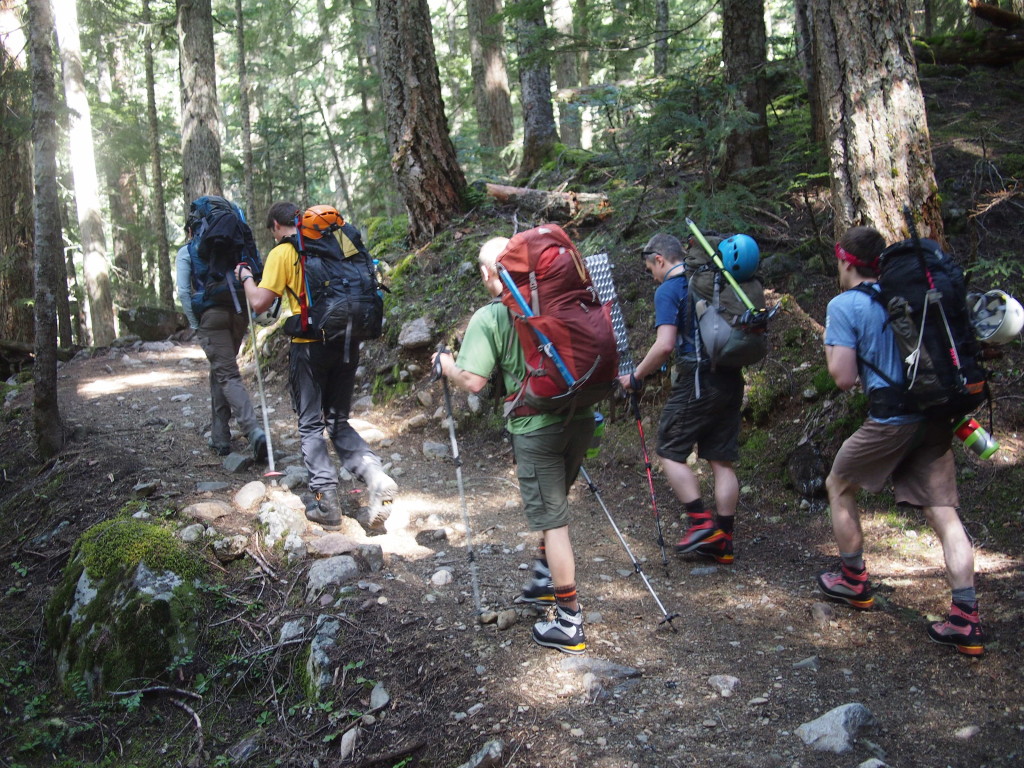 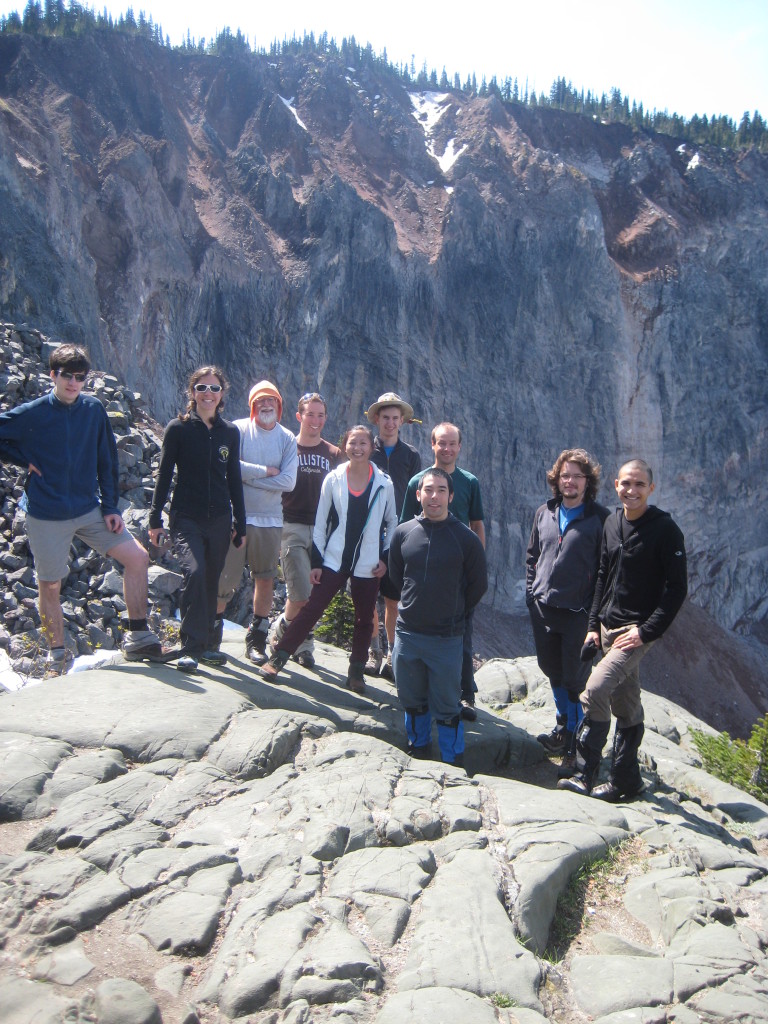 Overlooking the barrier. (Crystal To)

The Taylor Meadows campground was quite buried in snow, with a beautiful view of the Black Tusk (which will prove to be as far away as it looked!). We all set up camp (I found shelter with Roland and his wife Carla, who were wonderful and infinitely helpful all weekend) and ditched our heavy packs. 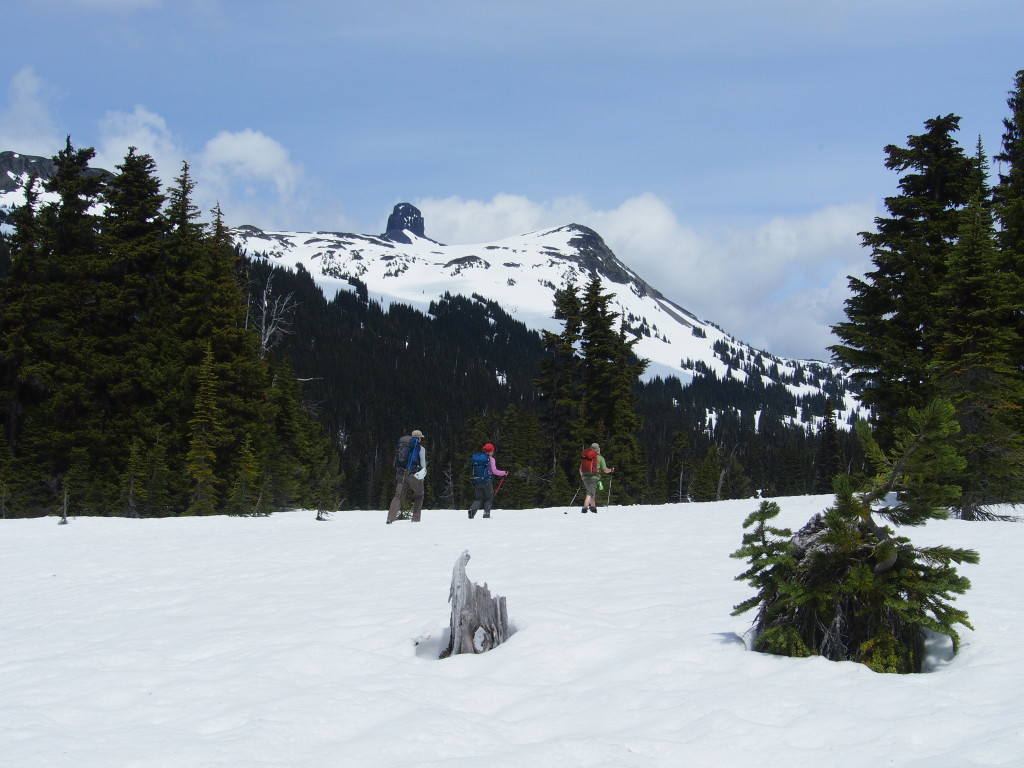 And so, off went the expedition to the Black Tusk. We sloshed through the snowy meadows for eternity, then after a break at a junction with a map, we began the hike up the steep, vast mountain of snow towards the Tusk. I kept pace with the main group for some time, motivated by the fear of being left to die. When I felt like I couldn’t take another step, I finally realized that there were slower hikers bringing up the rear, and I gratefully fell into pace with them. Some time later, Christine and I became the only ones left in Team Slow (or more affectionately known as Team Faster-Than-You-At-Other-Things) and that was peaceful. I got to “enjoy the view” (or more commonly known as “stop for a break”) often, and regained some energy. Seriously though, the view was absolutely gorgeous, and only got better the more steps we took upwards.

When we finally reached the base of the actual Tusk, there was a group waiting for us. Jens (who organized the trip) was great and stuck to the “beginner-friendly” thing about not leaving anyone behind; he was always waiting at the next milestone. He talked through what we were going to do next, and let us all decide whether or not we wanted to continue further. The next part was a kind-of sketchy walk on loose rock across the base of the Tusk to reach the easiest-to-climb “gulley” on the other side. At the base of the scramble, we were given another chance to turn back, by which point we were all pretty much committed to finish this damned thing already. 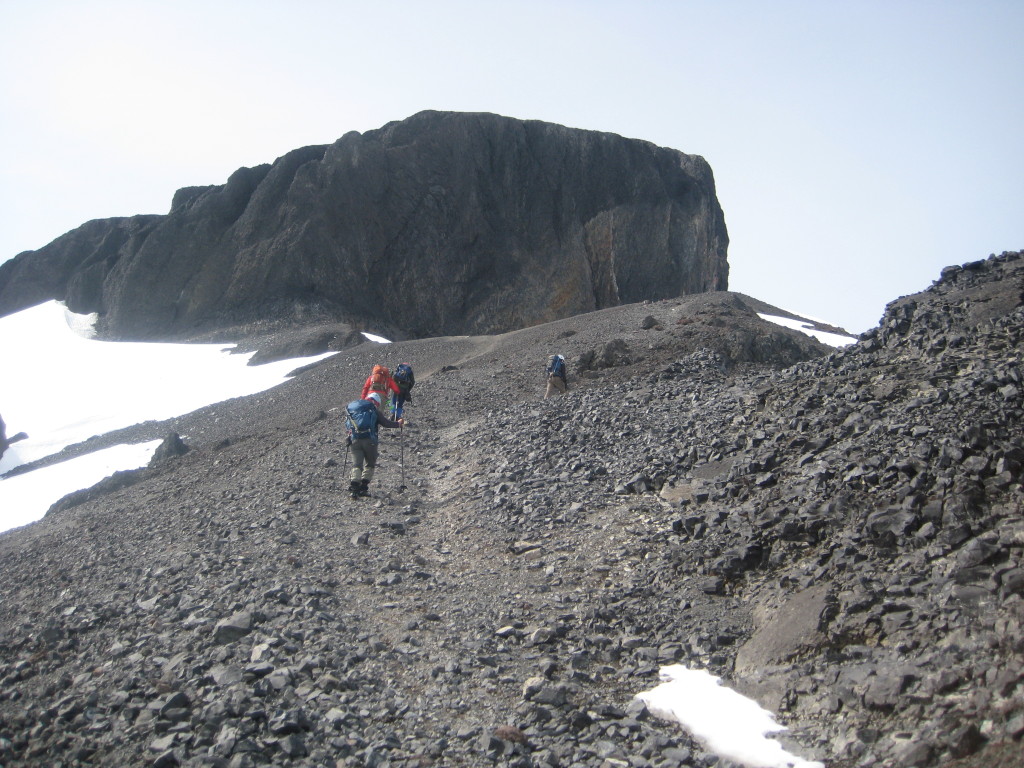 Traveling the scree towards the Black Tusk. (Crystal To)

The scramble was great fun. It is often described as a “chimney,” which is quite accurate as you are always surrounded on three sides by rock, meaning little exposure and a decreased psychological fear of falling to your death. There are also mini platforms throughout the climb on which you can stand for a bit, relax, and think the next part through. After emerging at the top, another short walk up on more loose rock led to (finally)… the summit! 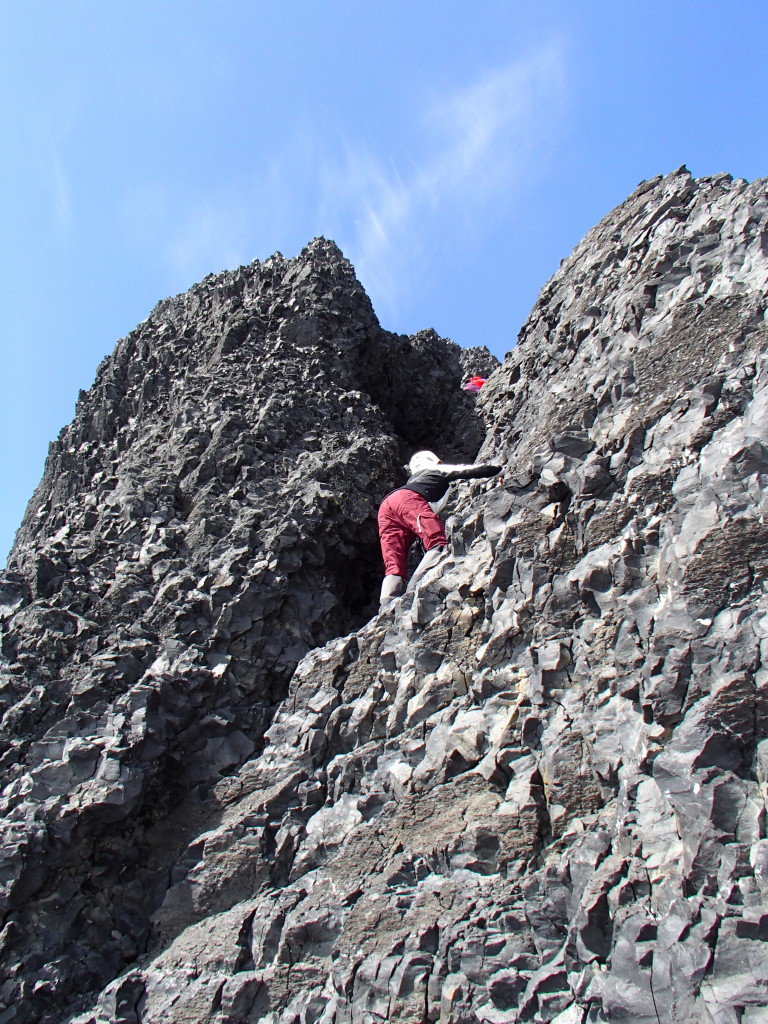 360 views, can’t explain it, the feeling of victory, can’t really explain that either. It was all pretty damn rad. Jens broke out a celebratory flask of maple whiskey, and we all took a well-deserved break. 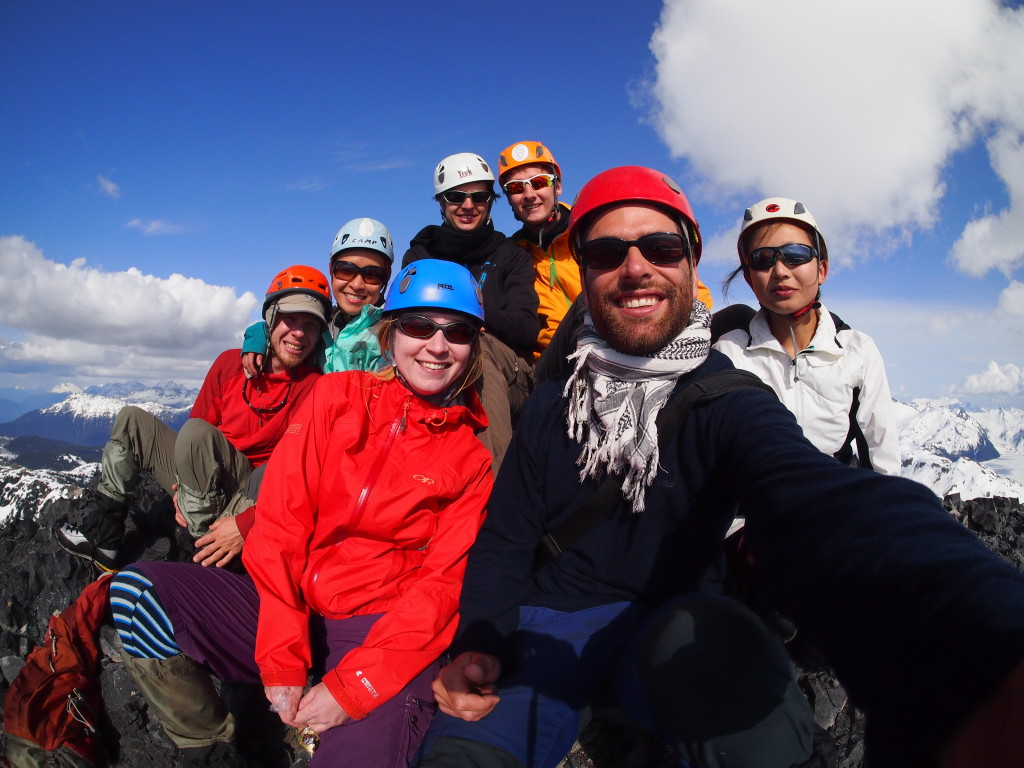 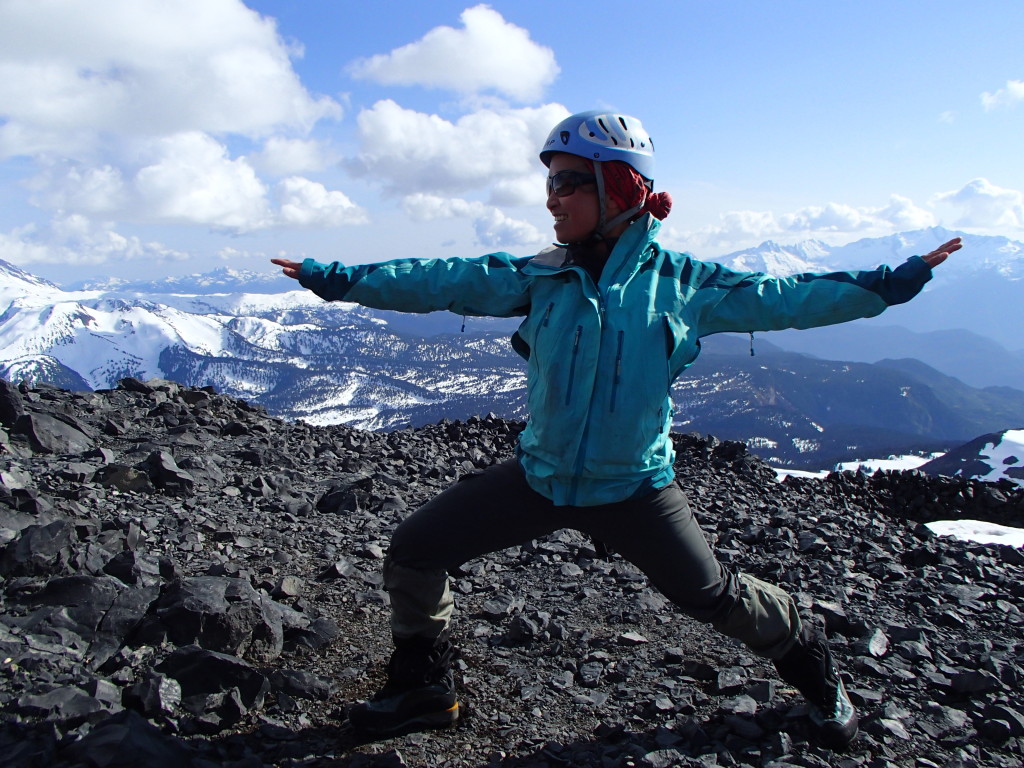 It was getting late though, so we hurried back down soon after. The descent back through the gulley was said to be scarier than the ascent, but it was okay. After that, we hiked down. As a plus, we got to have a lot of fun out of sliding down the same snowy slopes that were such a torture on the way up. The most exciting slide of all was that of German Ben (not Ben the Skiier), who whipped out a giant poncho to use as a sled! The hike down was vastly more enjoyable than the trek up, and after another eternity of hiking through the meadows, we were finally back at camp. 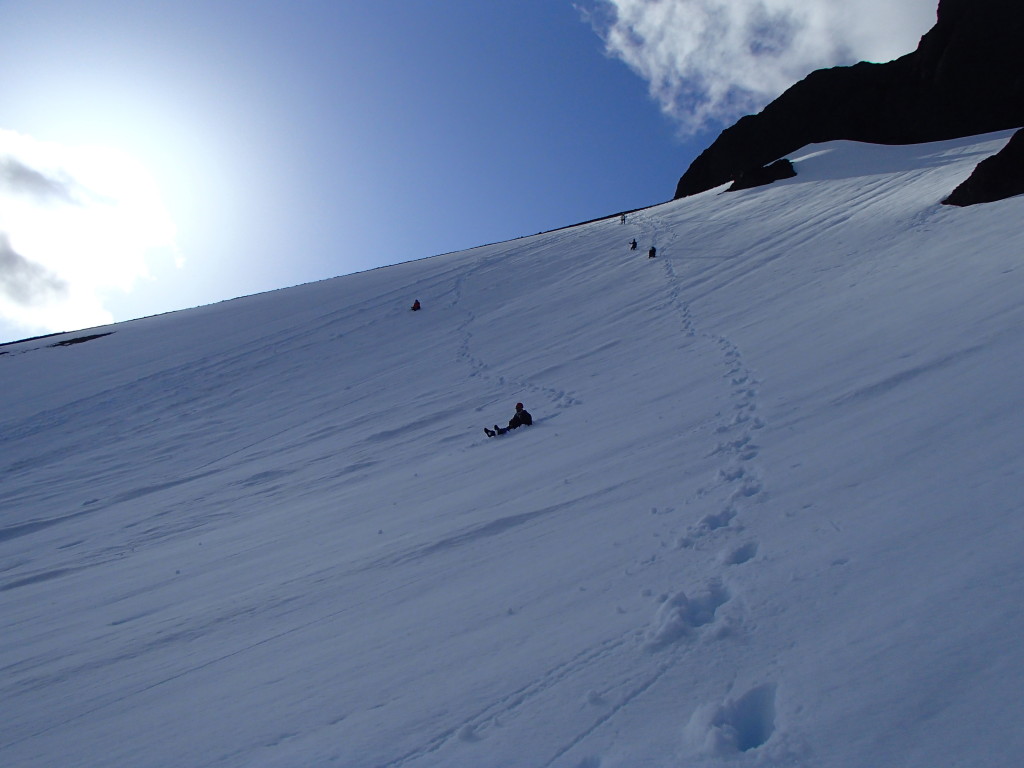 Bumsliding, an advantage of the spring ascent. (Jens Vent-Schmidt)

Food, glorious food! We all had dinner in the shelter, and with 20+ VOC members present, we filled the place with excited conversation. Highlighted meal: Frank’s masterpiece. He whipped out a ton of fancy ingredients (including a can of coconut milk and a tupperware of cantaloupe – “I can get away with carrying a heavier pack on beginner-friendly trips”) and concocted a delicious curry. As for me, I was lucky enough to share food with Roland and Carla! Carla brought a delicious dinner for the three of us, which seemed like 3-course gourmet as the pasta soup was followed by hot tea AND a gingerbread-Kahlua-infused pudding dessert.

I believe the party went on for much longer that night, but I retired early to sleep as I was exhausted from the long exhausting day. The night was pretty cold, but not unbearable, and it became wonderfully warm in the morning when Roland and Carla both woke up and threw their sleeping bags on me before leaving the tent.

Sunday morning: a group of hardy hikers, unaffected by the previous day’s activities, did another hike up to Panorama Ridge. The skiiers also left to get a few more runs in. The rest of the stragglers either slept in as much as they could, or mulled around camp relaxing in the sunshine. Everyone left camp at a slightly different time, but no one hiked down alone. I believe we all made it alive. 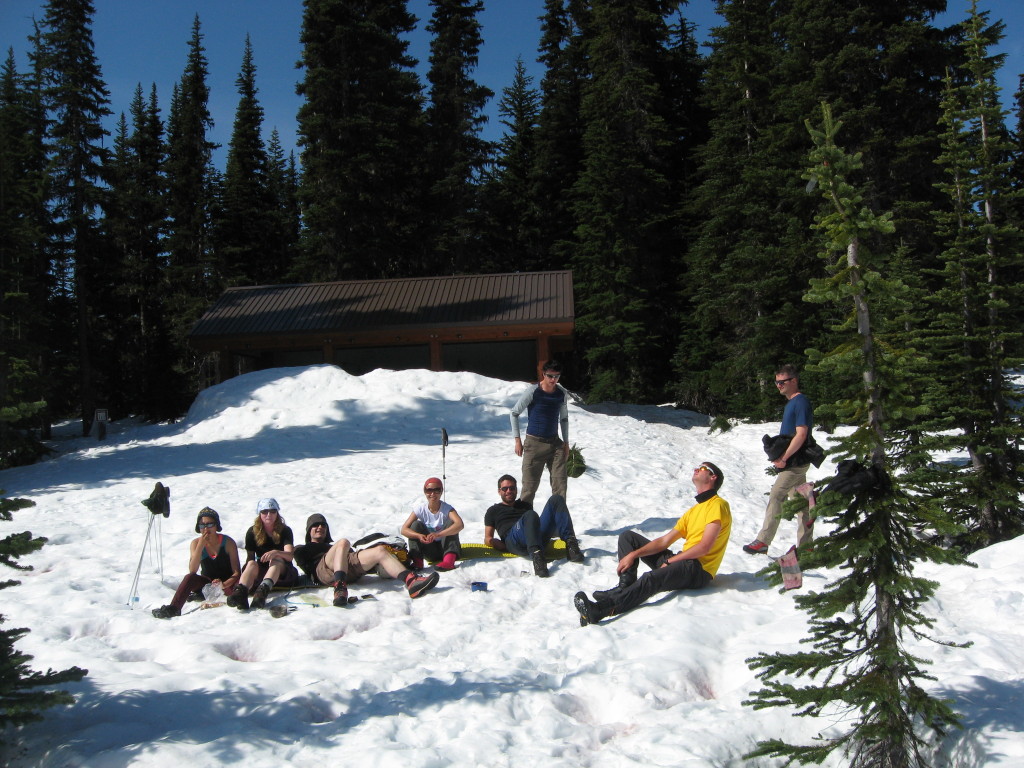 Faffing in the sun. (Deb Conrady)

Summary: It rocked! Thanks to Jens for organizing, thanks to Roland+Carla for shelter/food, thanks to everyone else for a good time. It was one of the most exhausting things I have ever done and I’m still surprised I ended up going all the way to the top. Can’t stress enough just how worthwhile it all was though (if any weary beginners are reading this). It was my first but won’t be my last trip – already looking forward to the next one.

This entry was posted in Climb, Hike, Trip Reports and tagged Garibaldi Park. Bookmark the permalink.

One Response to Beginner Friendly Intro to Scrambling: Black Tusk and Panorama Ridge