Saxony Climbing: How I stopped worrying and learned to love knots

Hello VOCers,
So in May I am going to be in Dresden for a while and there are some nice climbs in the area but they have this quirk that metal protection is not allowed. What this means is that one must use cord/slings and knots as your means for protecting a lead. I’ve never done this and while I understand the basic principals I can’t seem to force myself to climb on knots when metal is available (Cams/Nuts <3). I’ve been slowly buying some extra cord and practicing my knots to get proficient but I am just kind of going by what seems right.
Does anyone have any experience climbing in this style and willing to teach me/ want to experiment with me? I’m thinking before I leave if we go do some mixed metal/knot climbing to get used to placing soft protection and maybe falling on a few pieces (backed up of course) to build up a lead head in it. I don’t feel comfortable pushing any hard grades at the moment with this so some nice easy 5.6-5.8 climbing would be good.
Shoot me an email if you might be interested in this, I think it would be a really cool skill to learn and may be very versatile in the appropriate scenarios.
Cheers,
A

These might be good material for bulking up the knots.

And so my girlfriend Kat and I found ourselves in the German state of Saxony amongst some of the most beautiful sandstone formations we’ve ever seen. Being on the far-side of the Iron Curtain, a rich traditional rock-climbing ethic developed in these parts (and neighbouring Bohemia) independent from Western influence. Strictly (and the Germans mean it! ) no metal protection is allowed, instead knotted cord is used for passive placements or natural-pro (hour-glasses, chock stones, chicken-heads…) are slung. There is little to no sport climbing and top-roping is frowned upon, one leads and the second follows. It didn’t seem too bad reading about it but, as we were about to find out, terrifying in person. 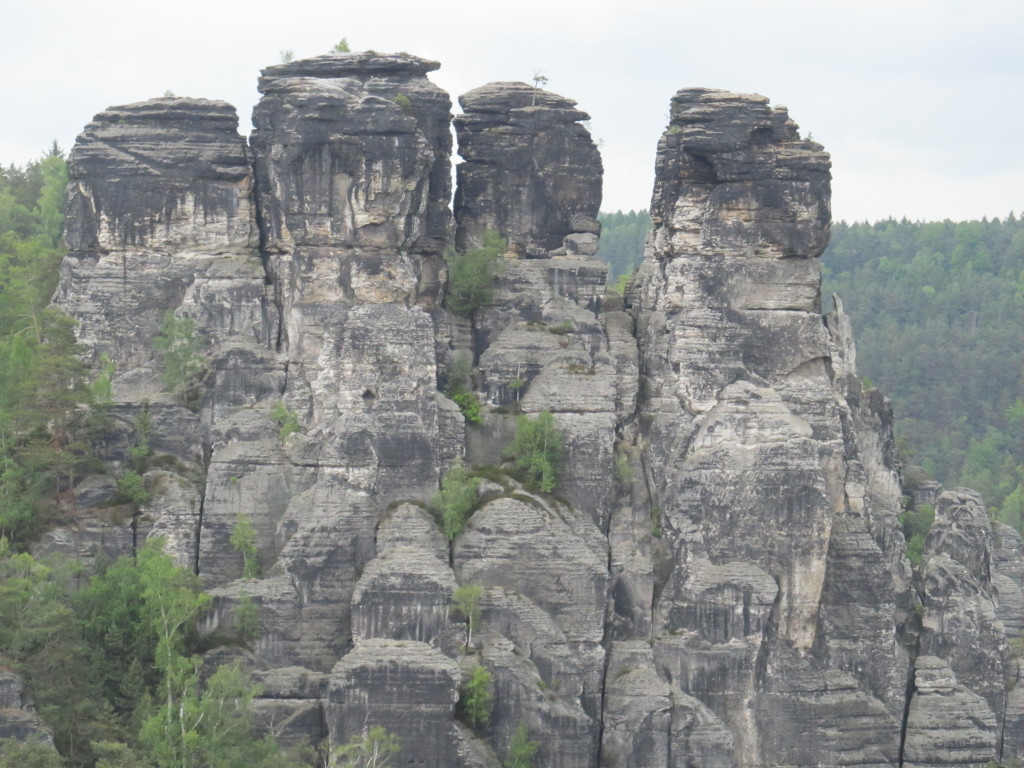 Taller rock formations in Bastei to give a sense of the rock.

Staying with Kat’s sister in Dresden we waited for the weather window to try out this style of climbing. Sunshine in the forecast, stoke high we took a bus to the village of Rosenthal-Bielatal, a 20 minute approach and we found ourselves steeped in a gorgeous sandstone crag. The rock is medium-grained sandstone, and you can feel sand linger on your hands after touching it. Chalk is not allowed, but you wouldn’t need it anyway with this rock. Kat “I could have never imagined to climb without chalk before (I love chalk) but it felt great!” The few bolts and protection we see are run out and very high (~10 m), since I (Artem) had to lead these pitches I realized that climbing here is committing, there are no half measures.

Opening our borrowed GDR guidebook, the German descriptions are scant, and Kat had trouble translating the German phrases into something useful A few routes are marked with an ‘!’ meaning they are particularly dangerous. We settle on ‘Schroffer Stein Vorderer SO-Rinne’ at Saxony grade III to learn the rock. Artem racked up a combination of single overhand to double figure-8 knots tied in static cord ranging from 5-11 mm, slings and a monkey-fist tied from 11mm cord. 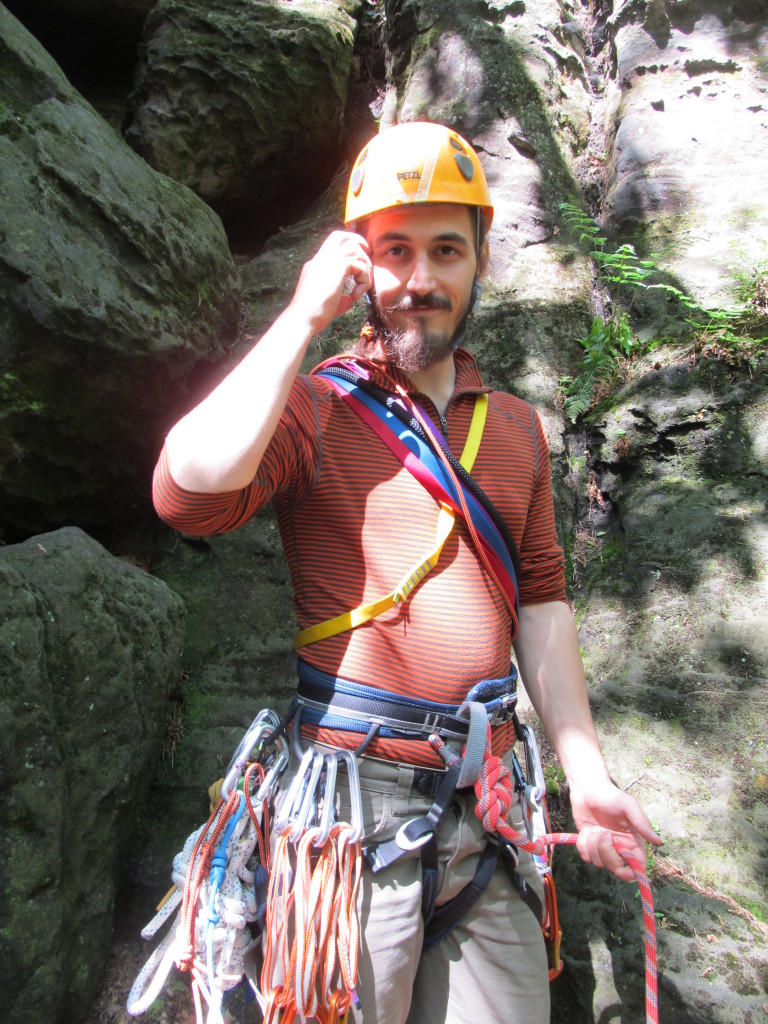 We both agree: The climbing was unreal; the rock had amazing friction and some of the most interesting features we have ever felt and started to love it. The tops of any features were eroded by the rain into perfect slopers with sharp underclings. We made our way up the first scramble pitch. Three pillars, fist-width apart, forming a right angle was the route in front of us. Climbing off the ledge there was a 15m drop behind me (Artem) and I jammed my way up. About half way up on the last pitch, I spot a chock stone in the crack and sling it. My first piece of pro in Saxony. I run it out to the end of the pitch. Kat follows bravely as I yell, “just try it, but don’t fall” and we end up sitting at the little summit, basking in the warm sun and signing the summit log. Artem is happy: The climbing here feels liberating, the simplicity of the pro gives a sense of adventure and tradition. All the gear and technology I learned to depend on didn’t matter here, the best protection here was your ability to climb, but as I found out, that’s not always enough. 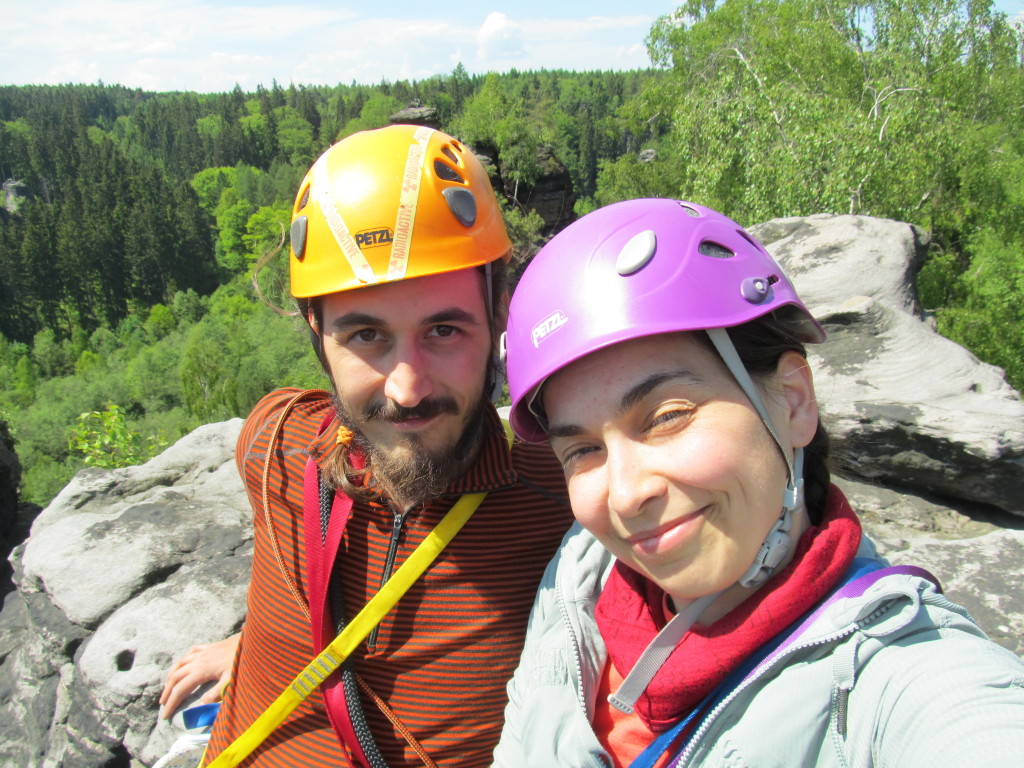 Basking in the warm sun after topping out.

Next we eyed two prominent pillars called ‘Little’ and ‘Large Hercules’, the moderate classic of the area, recommended by everyone we asked. As I (Artem) set up the first 10m or so I reach what looks like protection. I grab a 6mm cord tied into a loop with an overhand knot and wedge it in. I use a plastic spoon-handle to push it deeper into the wedge. As I set it and I am content, I feel rain drops on the back of my arm thinking to myself “It’s probably nothing, just a few drops, the weather has been gorgeous.” But as I look at the knot, I catch myself and think it might be best to back-off right here. Kat is relieved about my decision because EVERYONE (almost in panic) leaves the rock, it’s a rule! And it was good. As I reach the ground the drizzle turns thunderstorm. We grab all of our stuff and run into a nearby cavern. The locals give us hope. If it rains only for a short period of time, we might be able to climb again in an hour or so. But, the afternoon thunderstorm snuck up on us and we wait it out the downpour for the next hour and a half. Bummed that we can’t climb we contemplate returning to Dresden.

We are here now though, might as well risk it and see how the weather holds up for tomorrow. Everyone else has left the forest by now. We hike a little further and decide to bivvy under an overhanging piece of sandstone (“Boofen”) hoping that we will not get fined for it…The next morning we wake up early and find a different spot to nap in the warm sun. As we take up the warmth of the sun, we know that the rock is getting the same sun and drying up. In the late morning we go back to see what condition the rock is in. It’s dry, it’s time to climb. Yeahhh!!! But, wow, there is already an entire group of climbers in the area. We are a little amazed. They are at least around 60 years old and make it up the rocks as if it would be a nice stroll in a park. 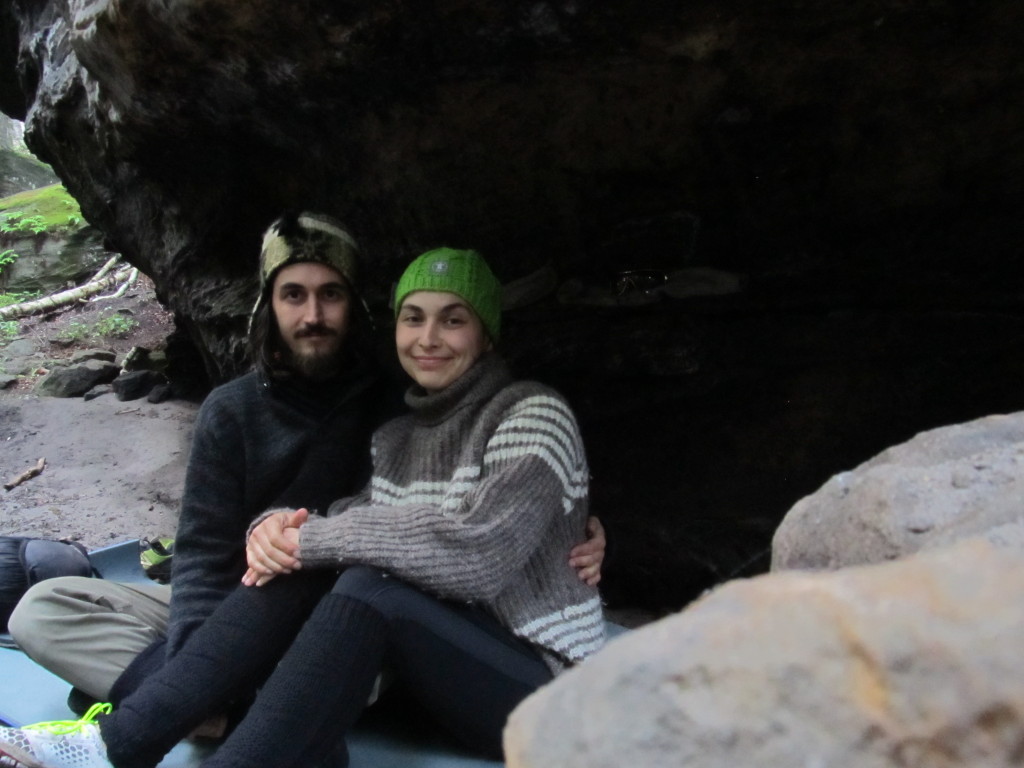 An overhanging rock offers ample protection to sleep in.

Artem climbs up to his previous high point on Hercules: I get my pro in and stare up at the route ahead of me. I could probably climb it, but it doesn’t feel secure and I can’t bring myself to climb hard above this shitty knot in front me. I make three moves up, hold and can’t reach the next good hold. I’m sweating and try to push the thought of falling on that knot out of my mind. I down climb, breathe and try again. It’s not in me, and this is supposed to be moderate?! I finally decide to back off. It’s just not worth it right now.

In the meanwhile on Kat’s side, a friendly, older gentleman passes by and starts chatting with me. He is wondering why Artem took all these knots and “child heads” (aka ‘monkey fist’…what?? that’s the German word for it!?! Seriously!?!) with him, there is no way to place them anyways. Actually, there is nothing for protection on the first pitch except one spot that is pretty much useless anyways. Well, that makes me (Kat) feel a little nervous, but I’m confident that Artem knows what he is doing. The man wants to help us and starts explaining to me how it would be best for Artem to proceed up as the route is everything but obvious. I’m translating and trying to communicate with Artem, but it seems that he can’t hear me very well due to the rock formations half way up. The local disappears around the corner and suddenly, he is standing close to Artem that is just about to come back down. He truly wants to help us with all means, apparently the second pitch is worth it.

Artem: As I climb down to the lower ledge a local scrambles up to me and explains that I’m going off route. The route traverses far left and then goes up the face. He walks me through the line and assures me it’s great. I take a few minutes and decide to go for it! 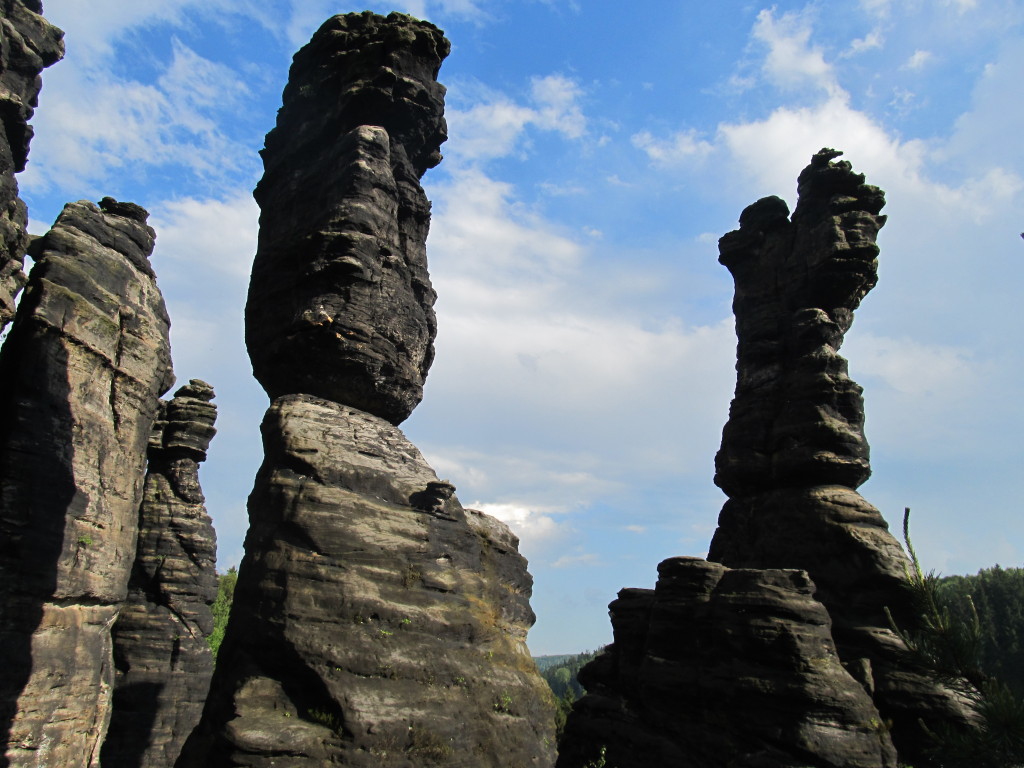 I go back, place the knot in the same sideways constriction and traverse left. It’s not too bad and I can mosey up the next few moves. As I climb higher and higher I realize ‘I’m now high’. High enough that even if that knot does hold it doesn’t matter since it’s too far down to matter. I feel an intense wave of fear come over me. I’m holding on here and I can make the next moves but there is little room for error. I let the fear pass over me like a thundercloud, I feel it ease and I make the next moves. I reach the belay-bolt and am intensely relieved. I anchor in and spend the next minutes calming down as the stress dissipates. I just want to get to the ground, I have no interest in continuing. I’ve had enough adventure, I want terra firma. I belay up Kat, tell her I want off this rock and she can see that I’m in no condition to keep going. We rap off, backing off again… 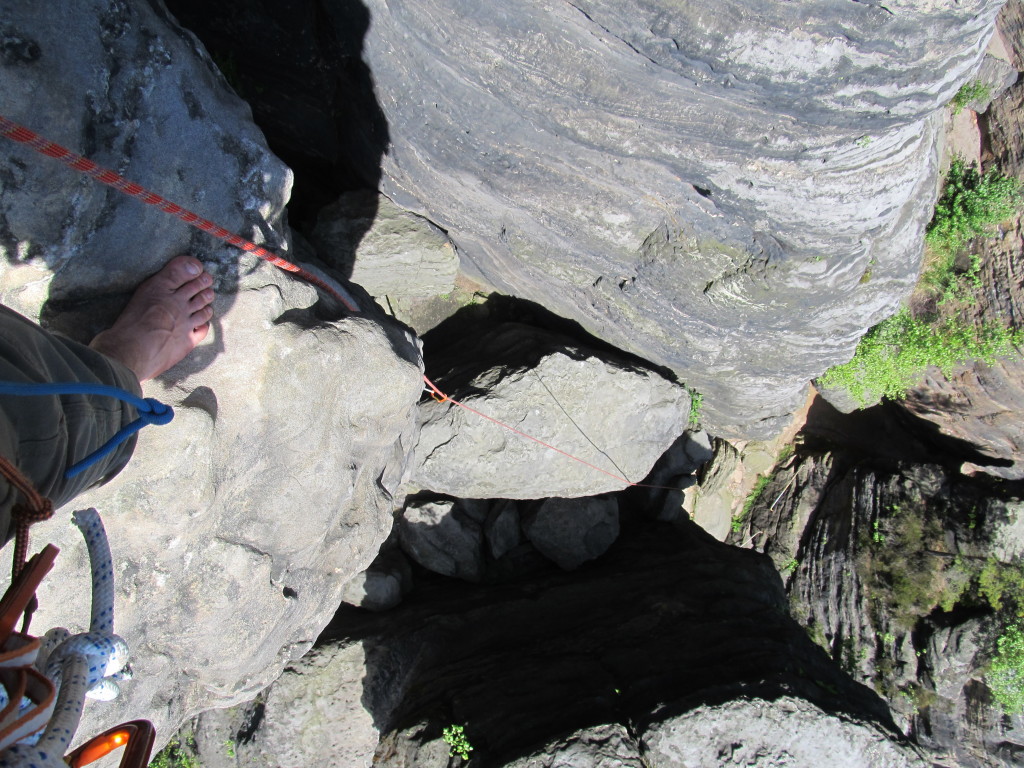 The end of the first pitch and the only pro I could place too far down to matter at this point.

As soon as my feet touch the ground I regret not having the courage to keep going. I could have probably kept going if I stuck it out. Well, lesson learned. The Saxony grade IV (~ 5.4) route was scarier than anything I’ve climbed before. We go around and find some easier scramble/climbs. We climb a little without rope (it’s pretty much what Artem did on lead anyways) and barefoot. It’s amazing and focuses me (Kat) a lot, it’s re-assuring. We mellow out for the rest of the day. Artem chats up a local later again and he confirms that he did the crux and the next pitch had really good hourglasses and protection possibilities for 5(!) pieces of pro. It’s alright I think to myself, only gives me a reason to come back.

We leave humbled with this taste from ‘old world climbing’. We will go back for sure! 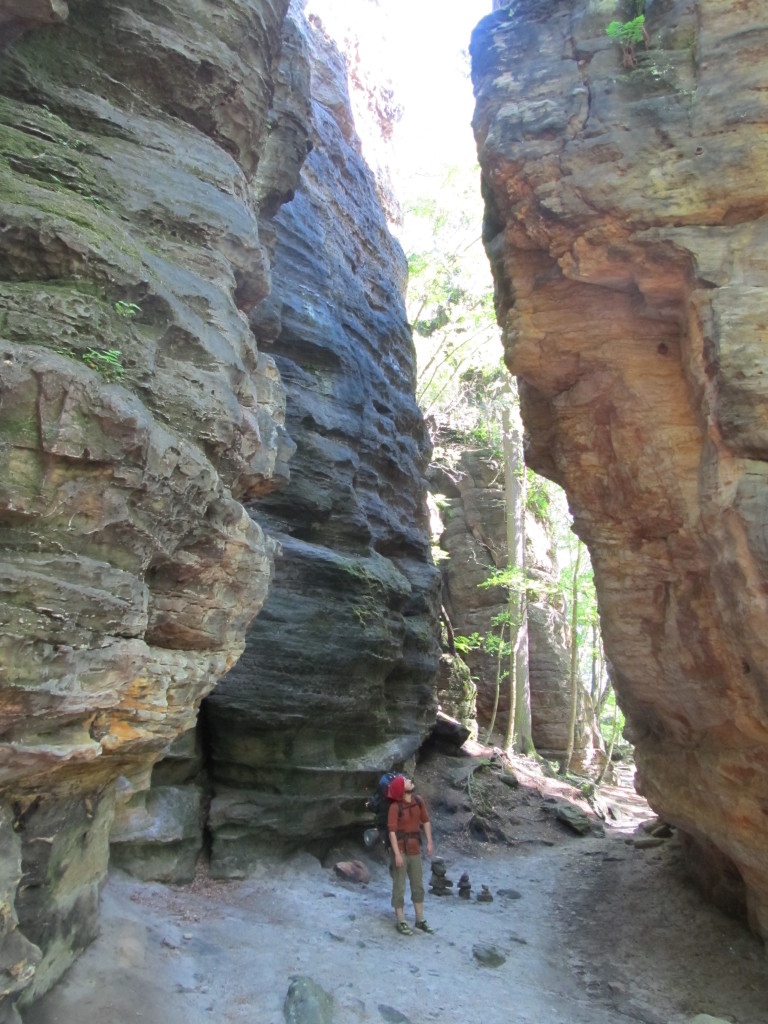 3 Responses to Saxony Climbing: How I stopped worrying and learned to love knots