There needs to be more stoke about the Mt. Rexford / Nesakwatch Spire area so I’ll try to pump it up with this TR.

After posting this trip on the message board there was some interest and an awesome group got assembled. In the end it was Julien, Jannu, Lena, and I who went up Friday night to camp at the trailhead. Piotr and Nick Gobin came in Saturday morning while Steph and Amin came in Saturday evening.

Saturday Jannu and Julien did the NW Ridge of the North Nesakwatch Spire and enchained it with the South Spire (including the cool offwidth summit block). Lena and I tried to do Mike Spagnut’s direct start to the West Buttress of the South Spire. Going off of an older topo (yellow line) we exited too early and ducked out of the big flake. The new topo (at bottom of this page) shows it going to the top of the flake. I lead the pitch deviating from it and it followed an exfoliating flake and then a licheny crack which was pretty tough. At this point Nick Gobin and Piotr (climbing up Rexford via the ridge) watched as I struggled up this pitch. After that though was a seriously cool #3 sized crack which goes up the big shaded area (green line). After that pitch it was easy to link into the regular West Buttress route which is phenomenal. There are some cool cracks and a killer 10b offwidth with roof followed by another nice crack.

Gobin, Piotr, Lena and I met up at the bottom of the climb and went to bathe in the creek. We all took turns soaking in the cold water and getting some funny pictures. Once back at our bivy slab we had troubles with our stoves (MSR Whisperlights) due to the heat. The check valve in the fuel intake spout assembly was stuck. Gobin got his out by pumping up the pressure and shooting it at his head (just missing his eye) and into his soup. Luckily it didn’t fly into the abyss. I got mine out with a leatherman. Anyways, funny thing to experience but something to think about when your stove doesn’t work and it’s hot out. After dinner we all headed up to a nearby summit to soak in the views which are world class. Later on Amin and Steph showed up to complete our gang.

The next day Piotr and Gobin went up the SW ridge of the N Spire. Their line looked awesome with a great crack to start. They even talked about a nice offwidth as well. I’ll have to go back and do that sometime. Amin, Steph, Julien, Jannu went up Mt. Rexford via the West Ridge. Lena and I attempted Frog Face but got turned around due to dirtyness. There was a rap sling there so Lena top roped the pitch and then we moved on. She had spotted a cool new line up a chimney so we went to check it out. Here is a description of that route and one we had done last year in the same area.

A – the Buckle/Frimer is a 3-4 pitch 5.9 somewhere nondescript over left of the main face up to the ridge line. Last year, going by the pink line on the original topo we climbed the first pitch of it and then messing around for another pitch or two to get onto the shoulder. This is shown as a red line on my picture. The first pitch is really varied and cool. There is a layback flake, offwidth, and an overhang to deal with. 5.9 seems right for it. After that it is wandering with variations possible. The line shown in blue on my picture is what we did this year. It is the next chimney up from the red line. There are twin cracks in the back of it and it is super cruisy 5.8. As you work your way up it becomes vertical and there is a roof to pull. Then this #3 sized crack appears on the wall and you can top out with it to a nice belay ledge. From there it is the meat of the route, a #3 sized corner crack that is 5.9ish but burly and then there is a roof (10a/b) as well which has a sweet finger crack in the wall to help out. After pulling the roof is a small ramp leading to a cool #.75 sized crack that has a positive edge for laybacking. That was seriously the best pitch I’ve lead in the alpine. From there we went up one more pitch straight up which  is the same as the last bit of the pink line in the original topo.

After that people went home while Lena and I stayed an extra night. It was pretty buggy with less wind. There was even a brief thunderstorm that night as well. On Monday it was getting hot and buggy as well so we declined on the SW ridge and went for Rexford instead. This included 3 pitches on the headwall, the upper two being two different variations. Really cool climbing (~5.9) including a crack which has you on an arete that is exposed so pretty cool positioning.

So yeah, pretty cool stuff to be on. We were really only touching the surface though because the best route is supposedly Dairyland and it looks great. The 5.9 dihedral start looks killer and so does the final crack.

Also, there are some single pitch climbs in the col between the N and S spires. They are accessed right from the ground and top roping is possible. Here is a 5.11 crack which is fun. To the right of that is a up and right trending crack which starts from fingers and goes all the way to a small vertical offwidth section (~5.9), super fun!

Drew Brayshaw’s topo as seen in the latest edition of Fred Beckey’s Red Book (this includes route descriptions as well).

Jannu, Piotr, and Steph all took pictures I believe. If you could post your links in the comments section that’d be stellar. 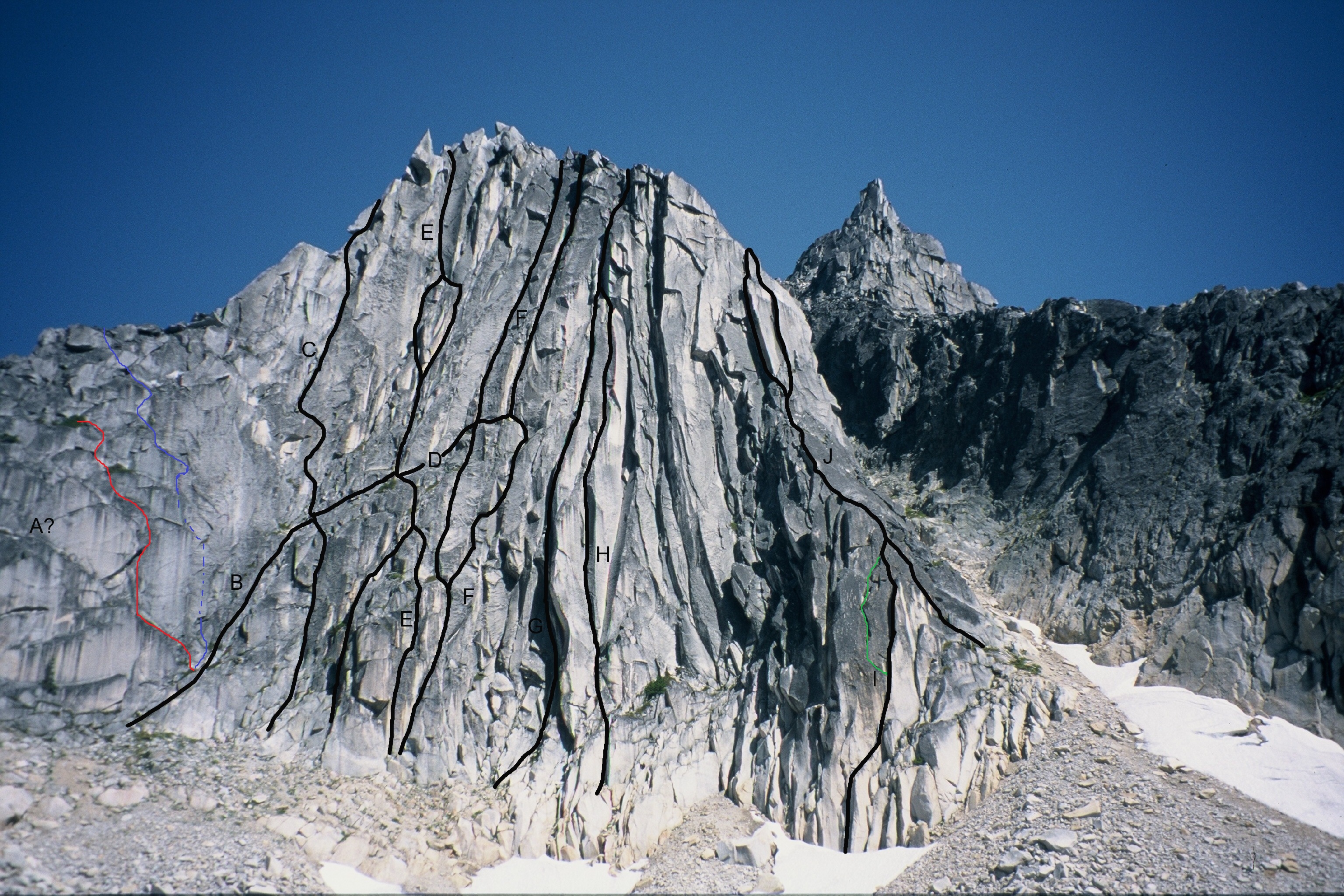 Shows some lines that Lena and I climbed. Red was last years. Green is a pitch variation to the direct west buttress start. Blue is a phenomenal line and begs more repeating.