Let’s be honest, we don’t really need an excuse to go out and have fun in the mountains, but if there’s a special occasion to give everything an official flair, then who would mind? As it happens, Saint-Jean-Baptiste Day is Quebec’s national holiday, and Marie-Eve decided to have a proper celebration on the preceding weekend. The plan would be to scramble Tricouni on one day, go cragging in Squamish the other day, and somewhere in between prepare authentic Poutine: 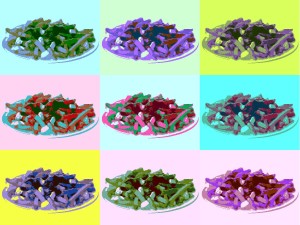 This classy dish consists of French Fries, gravy, and cheese curds, and during the pre-trip meeting it was decided that the only proper way to acquire gravy was to make it ourselves. Caroline invited us to a pre-trip dinner at her place on Friday evening, which with some additional email faff quickly turned into a proper potluck. 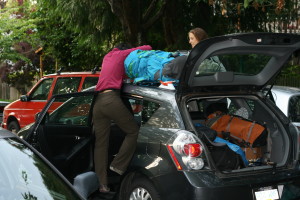 Speaking of faff, the car situation kept changing throughout the week, with Natalie and her car joining us last minute, with multiple concurrent email threads complicating the situation. But as those things usually do, it all worked out in the end and I was picked up 5 minutes early in Natalie’s car. I only knew it was a 4WD, so I assumed it to be some big sturdy Jeep/SUV/Truck thing, but to my surprise it was rather compact. This of course then added considerably to the faff as we had to strap a few backpacks to the roof via Voile-Straps. We had also agreed to take Jim’s overnight pack with us, so we had 6 packs in  5 person car. Did I mention that it was faffy? Well, it wasn’t too bad that we arrived late at Rodrigo’s place, since he slept in and was somewhat late. Late enough for Caroline and me to run to Main St and get some fresh coffee and the famous JJ Bean muffins (apparently they’re so famous that the muffin alone has a facebook fan page.), so all was well, and finally we were on our way. We met up with the folks from Andrew’s and Jack’s car at the usual Tim Horton, then entered the Squamish Valley Road and a maze of logging roads. \ Caroline giving us the OK after fixing a dangling exhaust pipe

We managed to get lost twice. First when we thought we had driven too far but hadn’t actually done so, and then again when we did indeed drive too far. Towards the end, the exhaust pipe of Natalie’s car detached when she went a bit too enthusiastically over a steep water bar. We decided to stop the car approach there and then, and luckily Caroline was able to reattach the car’s dangly bits. Andrew’s car had stopped quite a bit earlier. I guess he was a bit more concerned about the well-being of his vehicle than Natalie was. Luckily we had Jack and his sturdy high-clearance car, so he could do a shuttle while the rest of us waited around, applied sunscreen and engaged in various other faff.

Finally we were all assembled and started the logging road approach, which quickly turned into a somewhat muddy affair. Not minding the mud, we all enjoyed great company and perfect weather on the way in, and made it up to the lake in no time, where we stopped for lunch. 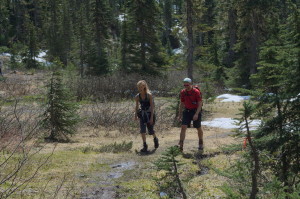 Good times on the hike in 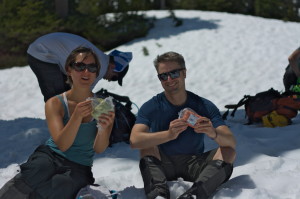 Lunch at the Lake

At the lake, we discovered that Ailsa didn’t bring sunglasses at what turned out to be a very sunny day. Snowblindness can set in quite rapidly, so first, Andrew offered to lend her his sunglasses for the day while staying behind in the shadows, but Caroline had a better idea: 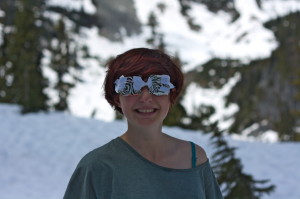 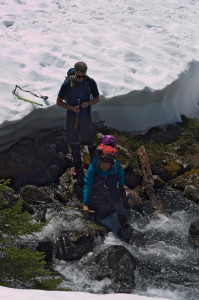 Once everyone was sorted out, refreshed and replenished, we set off towards the summit of Tricouni. This involved a bit of route finding through the meadows and over a stream, and then we managed to go up the steep side (instead of the easy side) of a water fall, but that also made it more fun. As we all were happily slogging and scrambling along, we noted that time was running a bit short, so we weren’t sure if we’d even make the summit, but decided to give it a go. It was the day of the summer solstice anyway, so we’d have plenty of day light. We decided on a turnaround time of 4:30. We also thought that at least those without prior experience in snow travel should spend a few minutes playing around with their ice axes and practise self-arrest. 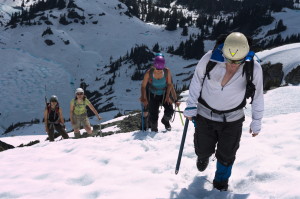 En route to the summit

Well, we made it to a point pretty close to the summit by that time, so we decided to just push on anyway, and in no time we were all on the top, enjoying the gorgeous views and posing for pictures. 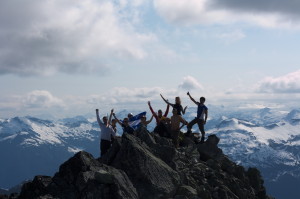 On the summit of Tricouni 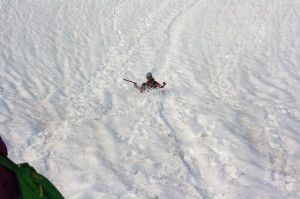 The best way down The way down went fast enough, with lots of butt-sliding and a bit of bouldering. Well, only I did boulder. I also did manage to forget my gaiters, so my feet were thoroughly soaked from the snow. At some point I did lose sensation in my left foot, so I had to warm them up with my hands for a while. At least the outside temperatures were very mild, so I wasn’t too concerned about frost bite.

Once back at the cars we quickly drove to the Chief campground where we ran into the folks from the Lead Ladder climbing course, who all were stoked about their day and about the routes they’d be climbing the next day. At that time we were all quite ravenous, so each batch of freshly fried poutine was devoured in no time. A fair bit of Quebecois fruit beer was consumed as well and the evening went on for quite some time, but at some point the tiredness took over. In line with the lighthearted nature of the trip, Caroline brought a massive 8-person tent that the bulk of the trip’s participants shared. I had other plans, though, since there’s this “secret” spot at [redacted, because it's secret] where I intended to camp under the stars. Caroline had never been there and was keen to see this secret spot, so she excused herself from the 8-person tent as well. When we arrived at the spot, we also found the entire posse of the lead ladder, who built a little tent city there. 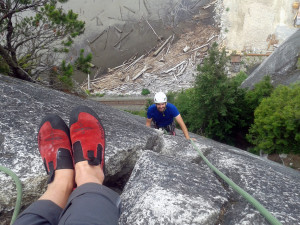 Waking up in the morning was fun: We first got woken up by a crew for a photo shooting with Dean Potter who were scouting out a possible location, and loudly exclaimed their bewilderment with a few “Holy Fucks”. Then one by one the lead ladder students emerged from their tents and got on their way. Caroline and I decided to use the morning to climb something directly on the Malamute while the party tent was still sleeping. After a quick breakfast, and waking up Natalie, who had slept in her car, we hiked back and rappelled down to the approach of High Mountain Woody, a Top 100 5.9 climb. My ankle was still feeling a bit funky, so I was more than happy to let Caroline take the lead. Opting for the harder but more direct and aesthetic line, she took a good whipper onto a solid cam, but that wasn’t nearly enough to diminish her good spirit. Now taking the slightly easier route, she was up the 45m pitch in no time, and I was following up this extremely enjoyable climb. We suspected that by now the others would probably have been up and left for Area 44, so we decided it was no use hiking back just yet and instead set up a top rope on another very enjoyable 5.10a finger crack.

Boy were we ever wrong. By the time we figured it’d be nice to have lunch at the camp ground, the party tent was just about to wake up and have breakfast. After much additional faff, we all squeezed into the cars and drove to Area 44 to end the day with some nice sport climbing. Everyone was busy climbing, so there aren’t that many pictures from this. Let’s just say: Area 44 has tons of loose rock, especially at the Marble Wall and the gully. Let’s also say that The Rifle is a weird climb with holds that feel a bit insecure for 5.10a. And that Rocky Horror (10a in the old, 10b in the new edition of Squamish Select) is an absolutely insanely fun climb, with “in your face” tricky and physical sections interspersed with good spots to rest body and mind. Both Caroline and I led it, and for me it was the absolute highlight of the day. After that, I was happy just lounging around and basking in the sun. The somewhat faffy nature of our trip concluded when Nat couldn’t find her backpack and lots of hiking around the crags ensued, but in the end all was well.

An uneventful drive back on the Sea-to-Sky concluded this tremendously enjoyable trip with beautiful mountains, exciting climbing and great crowd of lovely people. 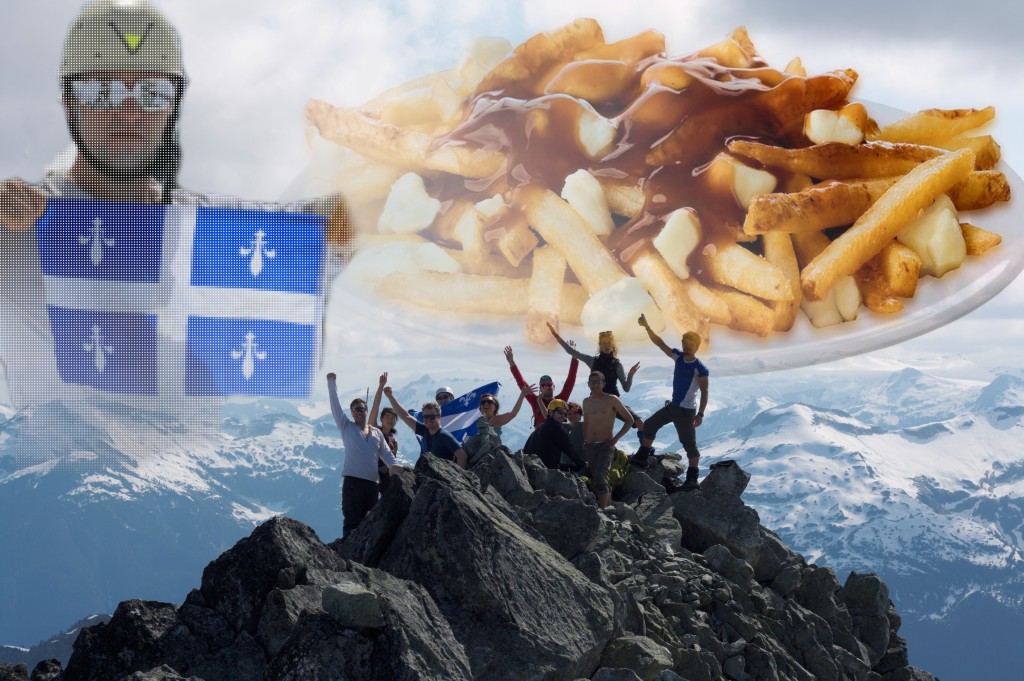