At 9pm on a Friday night, after tossing around a few other ideas, Piotr and I decided that Marhor-Needle traverse sounds like a fun way to spend a day, and by 7am the next morning we were on the way to the Coquihalla summit. I have done Needle Peak recently and thought it’s a fantastic short scramble, only wishing it was longer. Having done a bit of homework I discovered that indeed, it can be linked with the nearby Marhor peak via the ridge between the two. I was stoked for the idea, even if the reports mention 2 exposed cruxes along the ridge that made me a bit uneasy. But with rope and a bit of gear, I felt confident we could do it without getting into trouble, seeing as other groups have done it without any gear.

We started out around 9:30 from the salt sheds, up into the wet bush towards Marhor. There’s no trail up there, so chose the path of least resistance and become one with your inner forest bear. After about half an hour we saw a huge exposed slab, but my stoke was soon extinguished as we found it to be quite slippery, and after a few minutes, back into the bush we went. After about an hour and a half total bushwhacking time, we got onto an increasingly clean scramble and around noon we were standing on the Marhor summit. There we proceeded to have lunch , relax and look at the imposing pointiness that was Needle Peak that we were to eventually ascend. I changed into my shiny new five-ten approach shoes that felt fantastic on clean rock, and we started on the way down to the saddle. The descend follows a ridge and is basically a walk down slabs with long cracks. One crack was basically as wide as my body and Piotr found it best to use his butt as a contact point, I found it just plain awkward. But eventually we were down onto the saddle and heading up the ridge.

At the bump on the ridge we met up with another party, precariously checking out Crux #1, an exposed descend down a ridge that got progressively steeper and narrower towards the bottom. I ended up downscrambling it, Piotr opted to rapell , and after much discussion, the other climbers decided it was too much and turned around calling it a day. The downscramble felt exciting but secure and the rock ridge solid . Next came some steep scrambling up to the next part of the ridge over some rock that turned out a bit crumbly.  I found this part more “interesting” than the crux we just passed, but in all quite reasonable. At that point I started eying what looked like a big blocky step, which I could see no immediate way around, and I was certain it’s  Crux #2.

After more ridge walking and fun scrambling we got to it. Crux #2 was not really a block/crack as I thought from far, it’s actually more like a super narrow path along the left side of it. Since we had the gear,good spot to place it , and the spot was very exposed, upon Piotr’s strong suggestion we roped up and made it up with no issues. In hind sight, rope was a much safer option as some of the rock was crumblier than you want it to be and fall would be fatal.

After some route finding and more fun scrambling, we went up the final chimney up to the Needle Peak. It was glorious. There we again stopped to chill, change out gear and snack.

After that came the fun downscramble off Needle. On the way down there’s 2 huge boulders that I named the Devil’s Balls on my first trip there, and upon hearing the name Piotr felt compelled to climb them. Which he did, successfully.

The hike down to the car was pleasantly short and was followed by my traditional stop at DQ in Hope. Because a Blizzard always makes for a delicious end to a great day.

Overall took us 9 hours, a bit more since we decided to chill at the ridge after Needle Peak and could have been done in 8 if we wanted to, still comfortably. So far, this has been the best ratio of scrambling to minimal amount of slog and suffering out of any trip I have done, and the views fantastic. The rock on the ridge was a bit crumbly, not as awesomely solid as on Needle itself for some reason. A great fun intermediate trip, though I would not quite recommend to a novice scrambler. 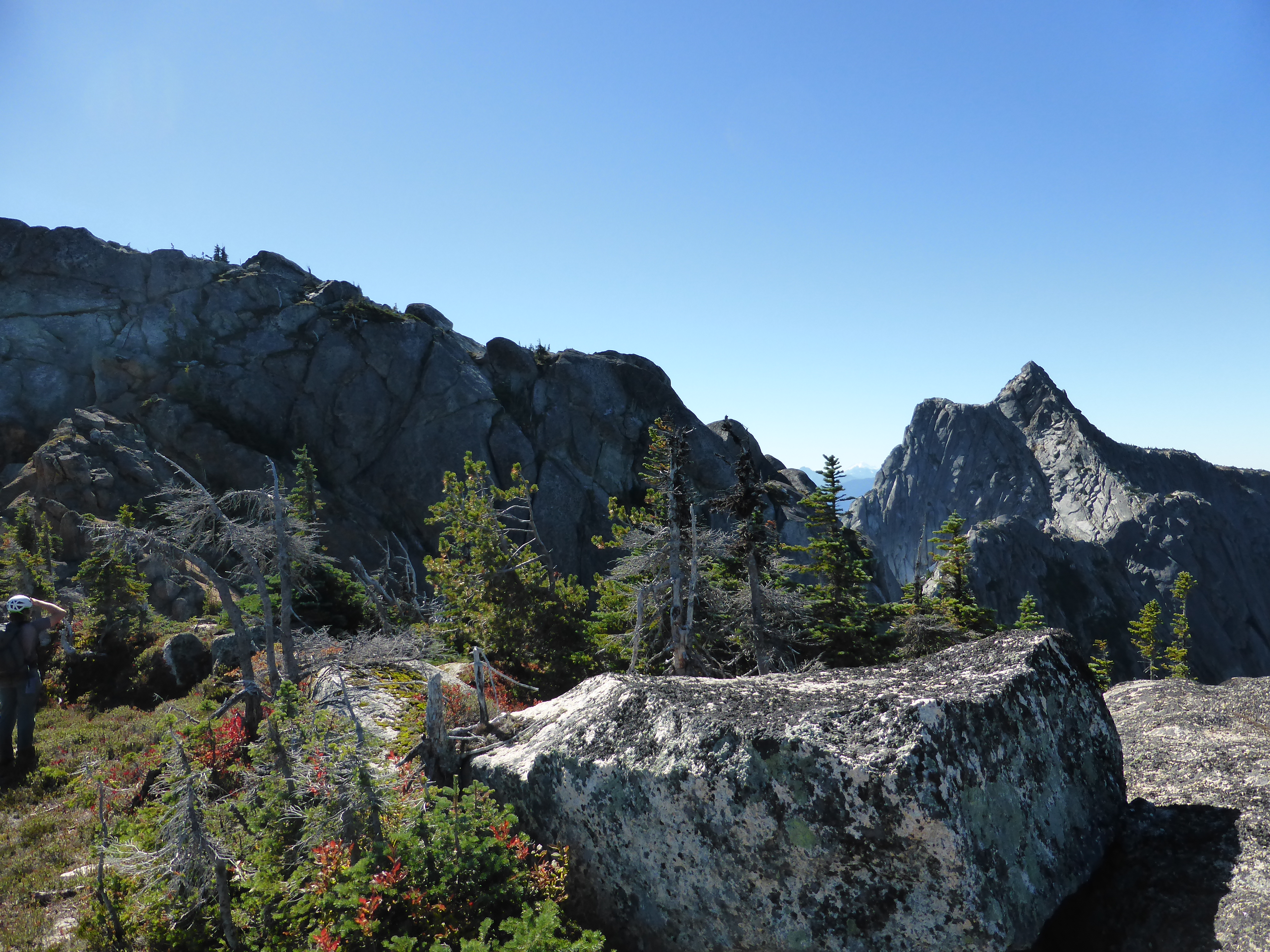 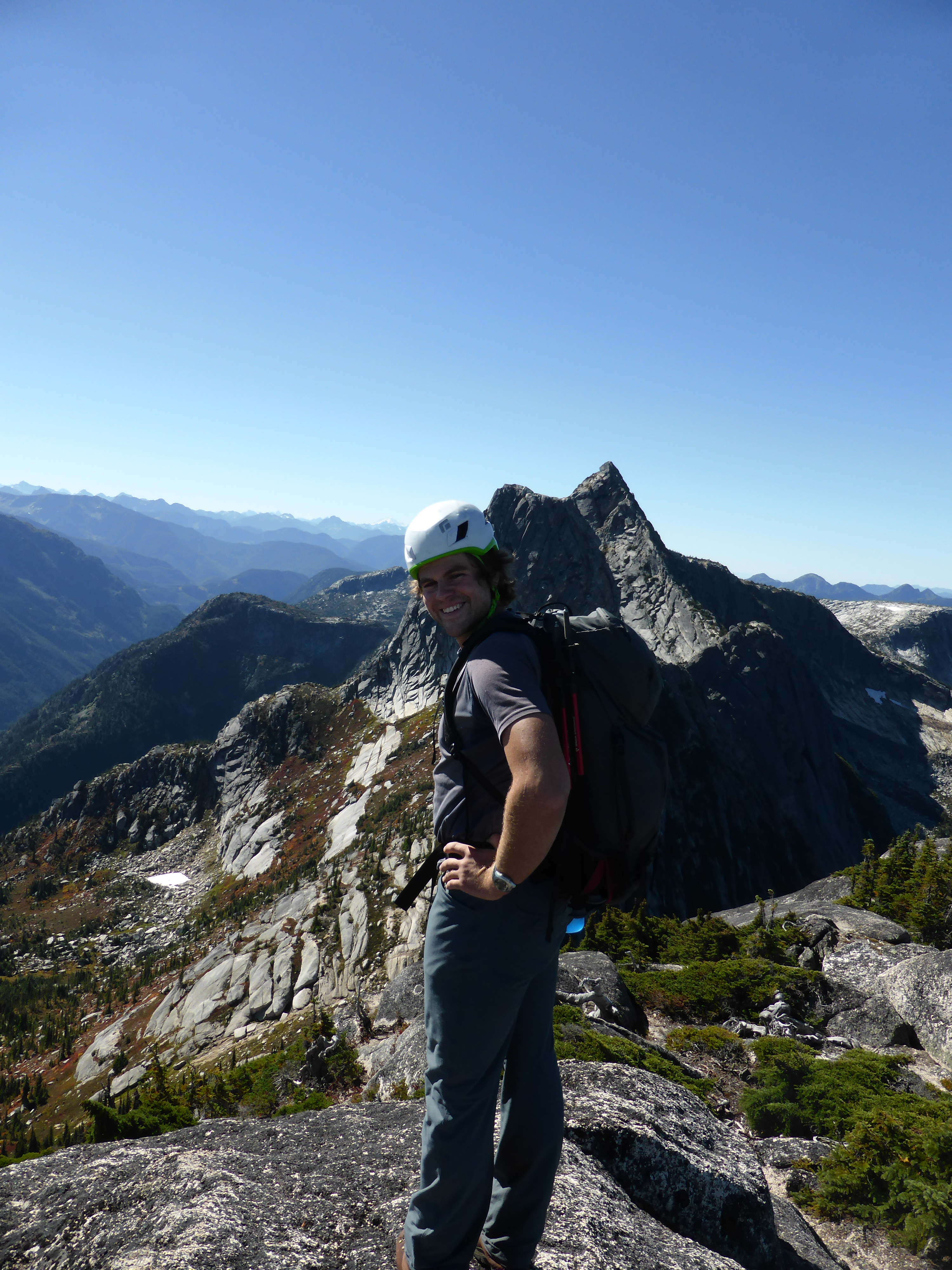 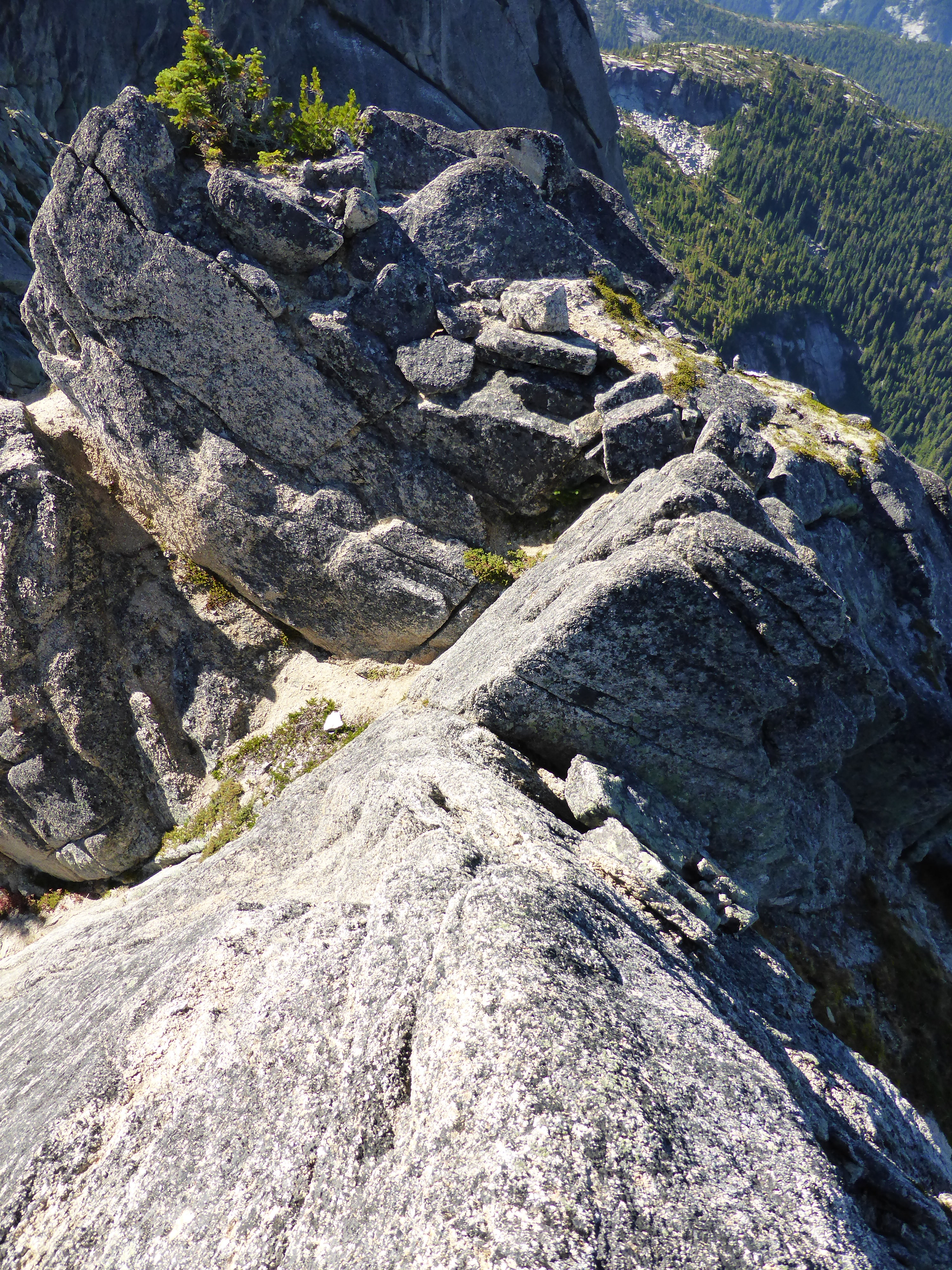 Crux 1 looking down-it’s not quite as steep as it looks, but it is steep 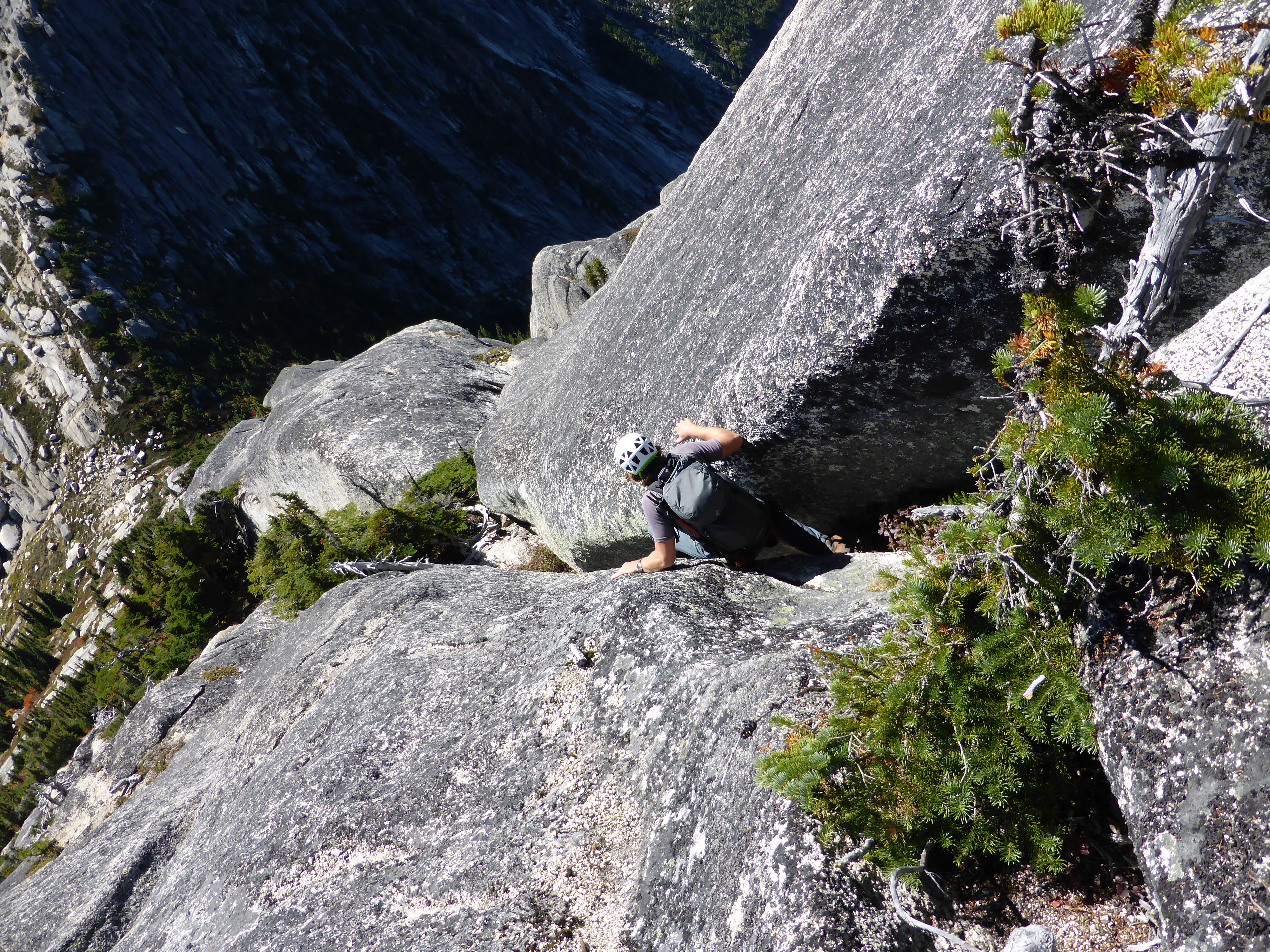 Piotr and the butt-wide crack 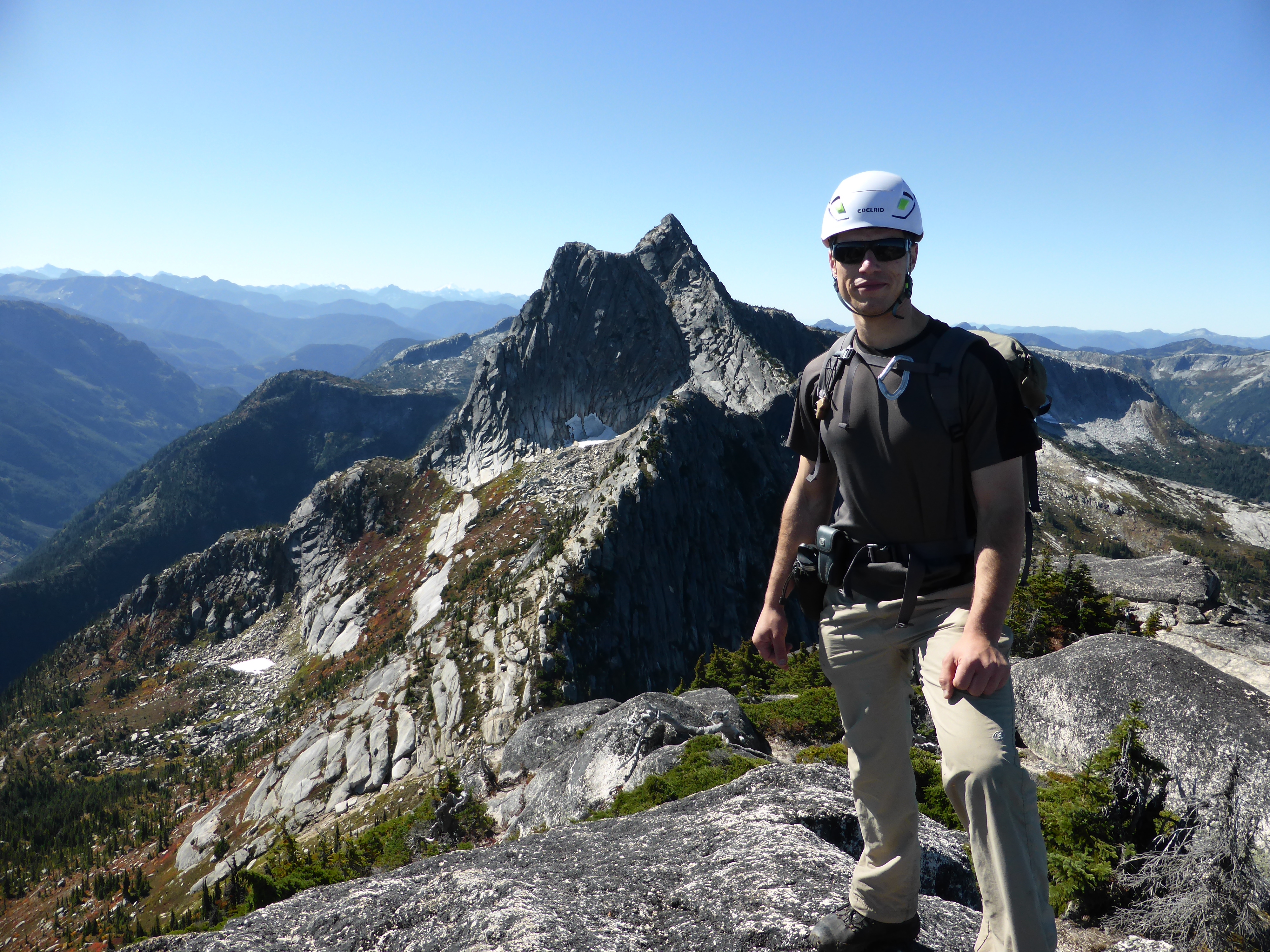 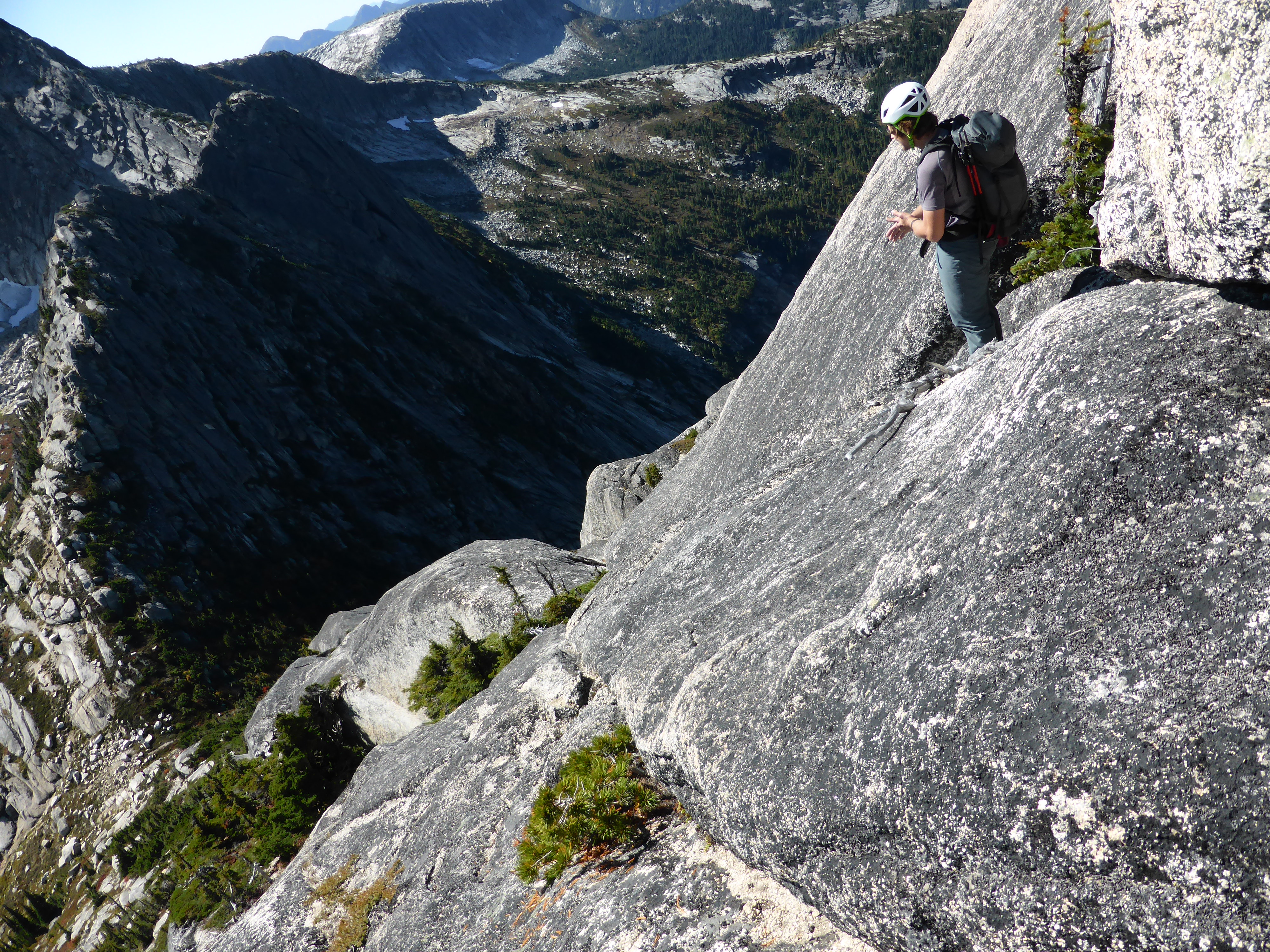 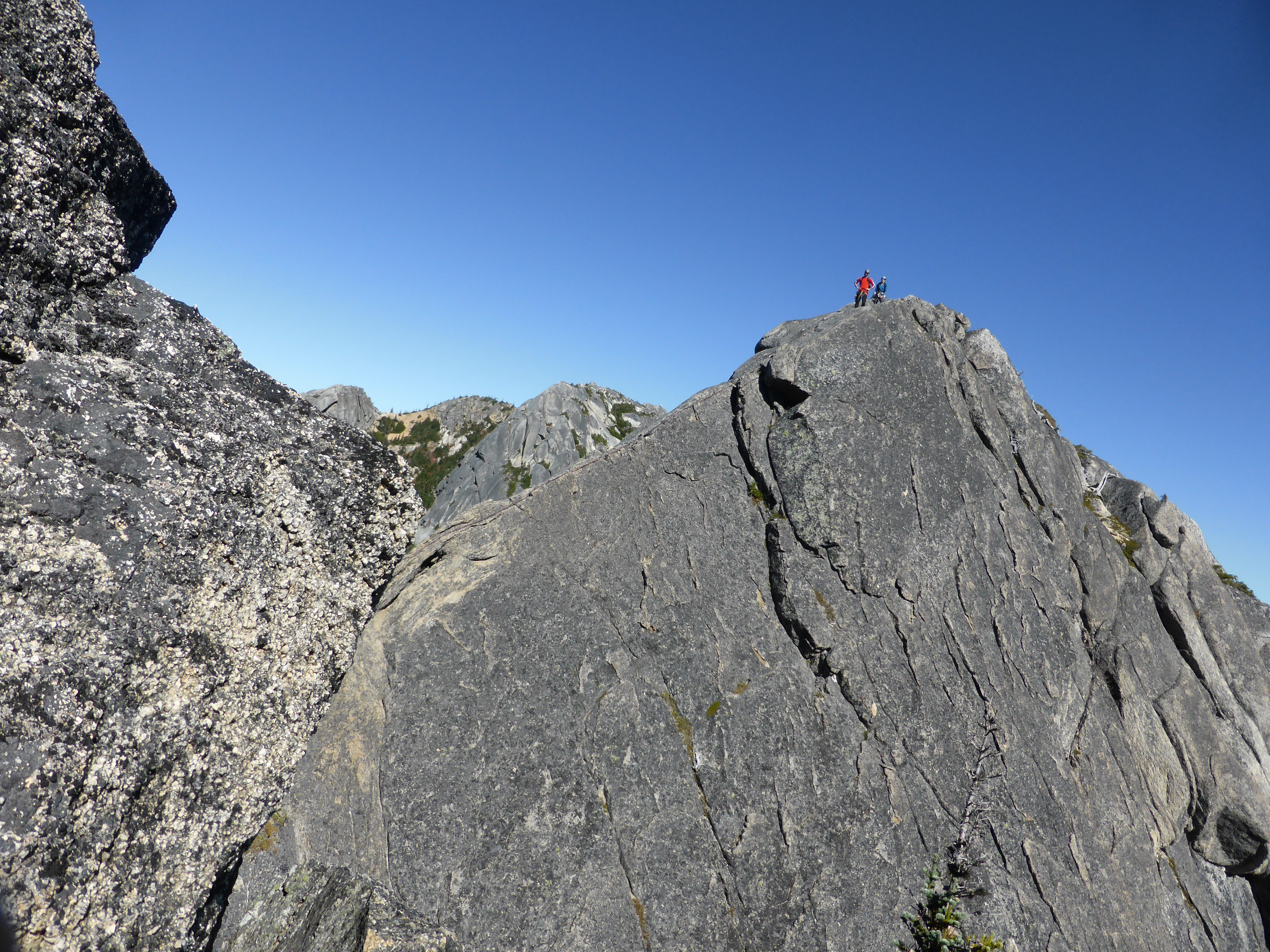 Scramble up ridge after Crux 1 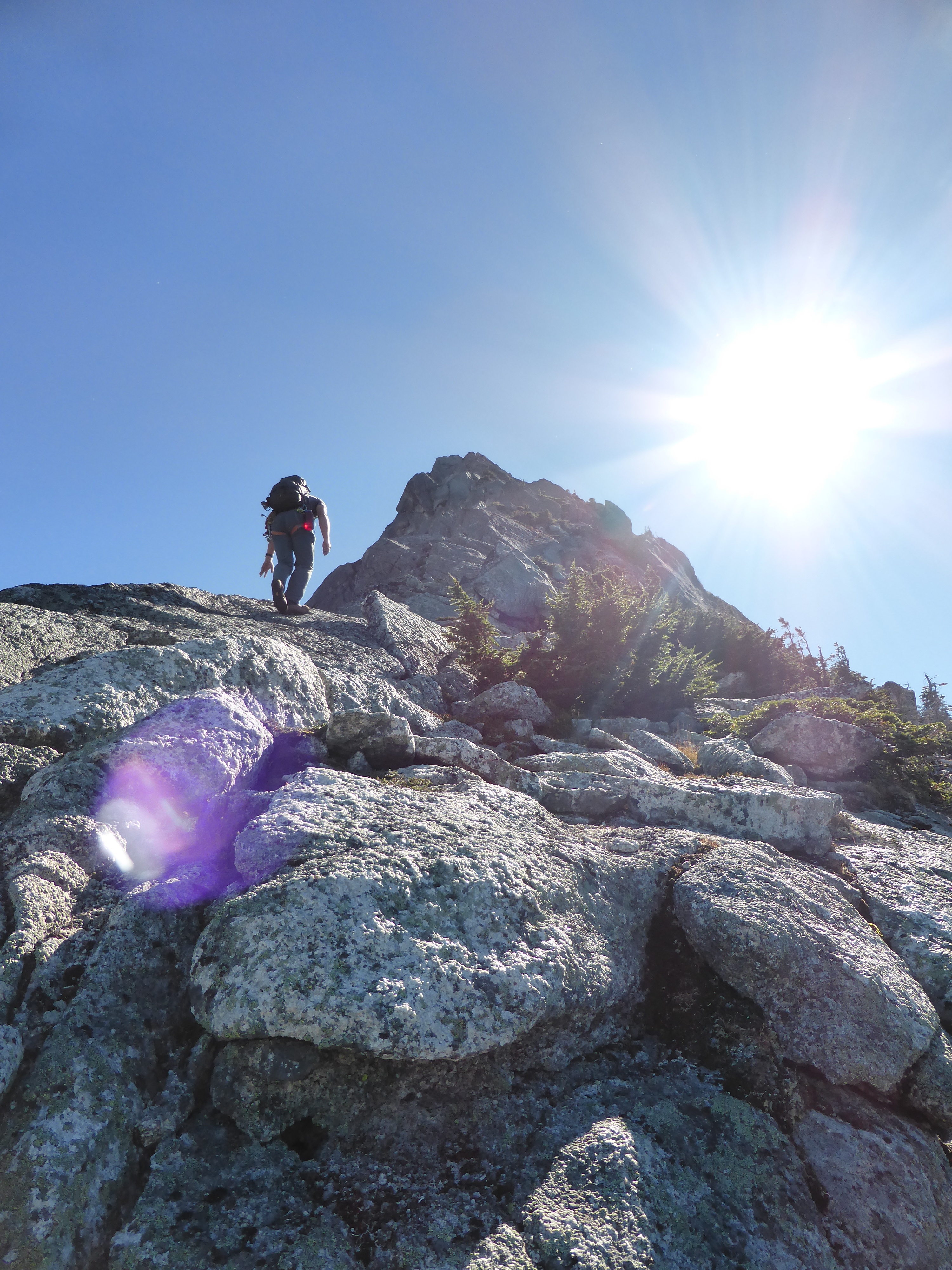 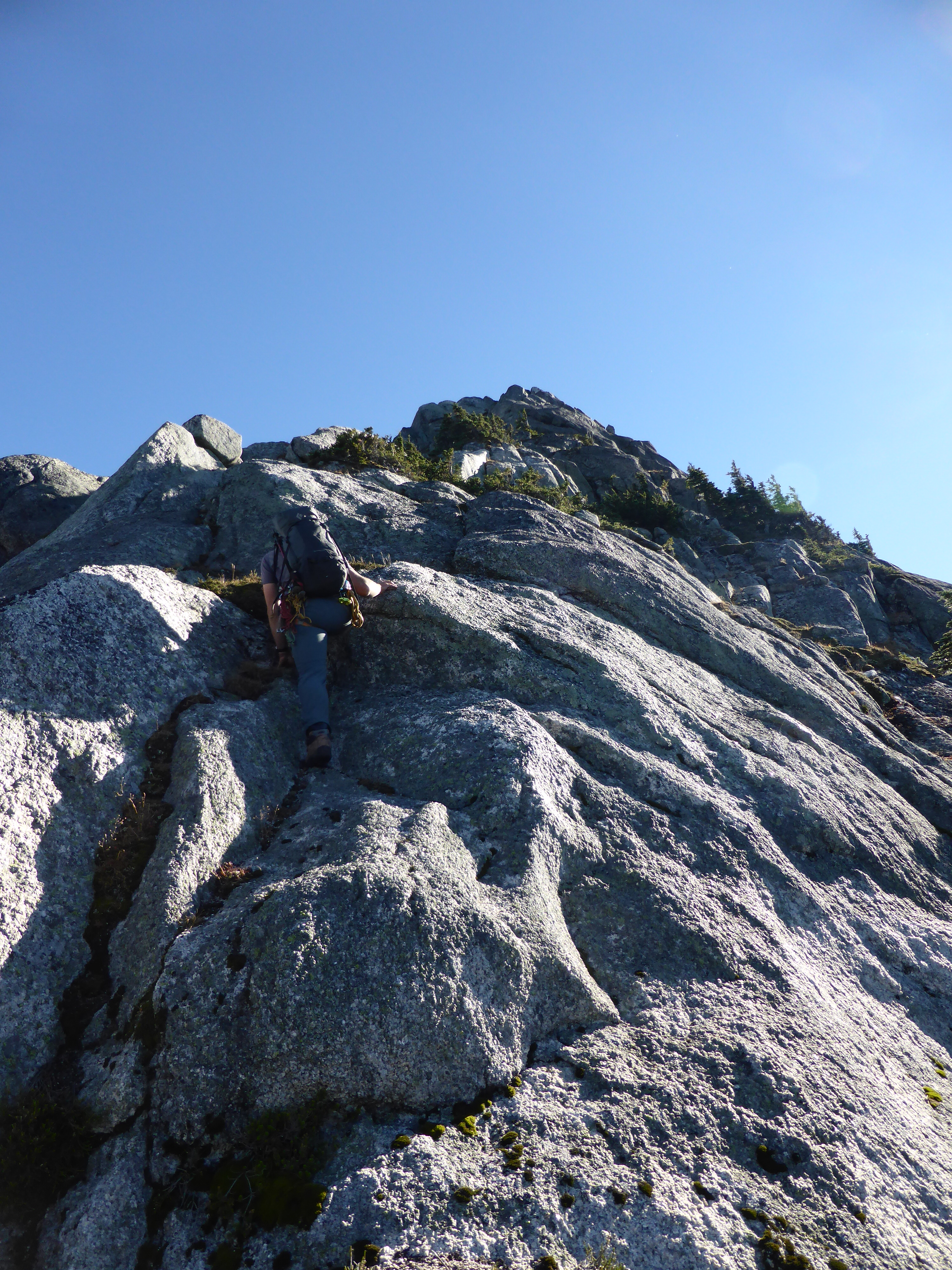 Piotr coming up the final chimney 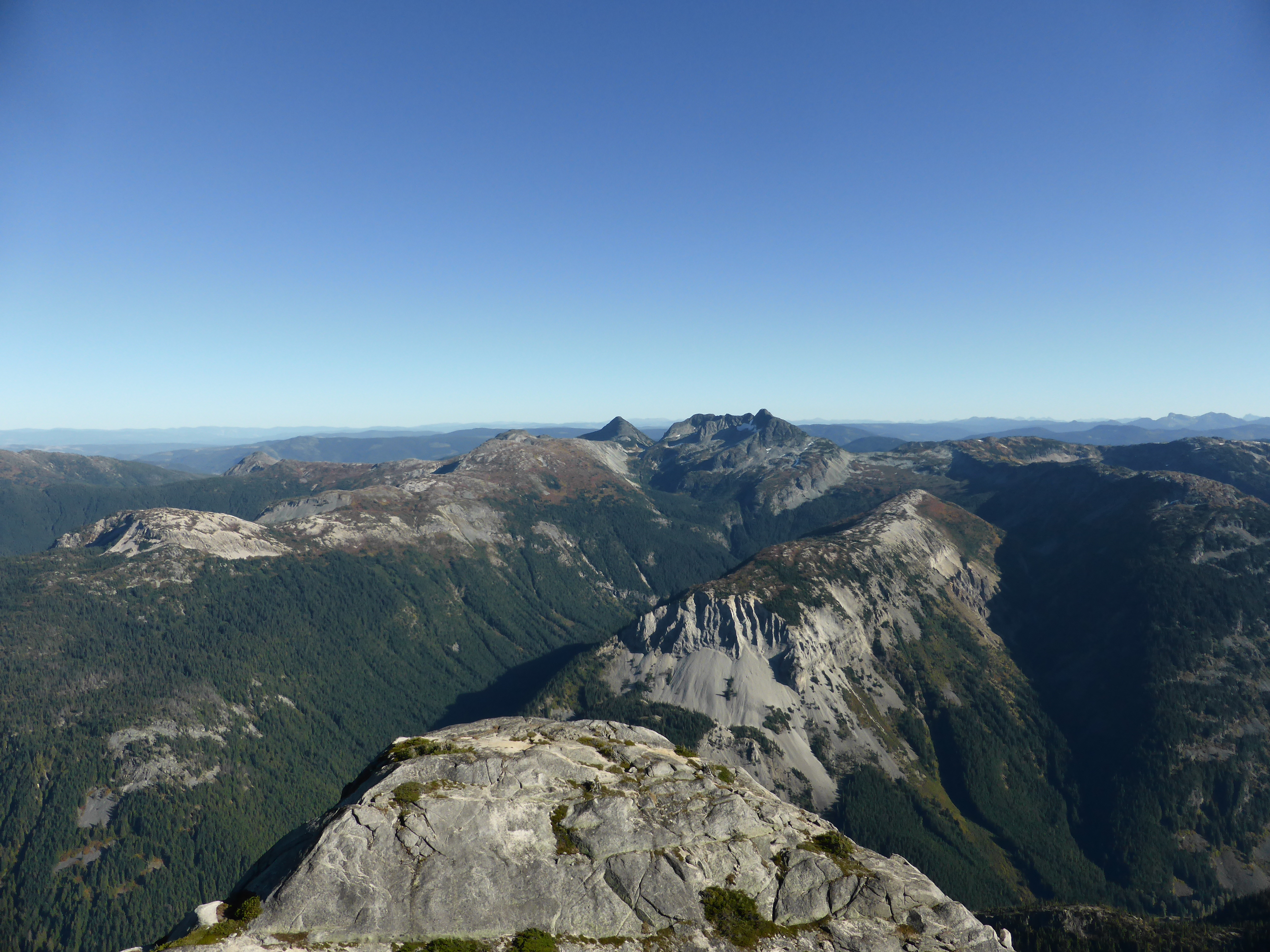 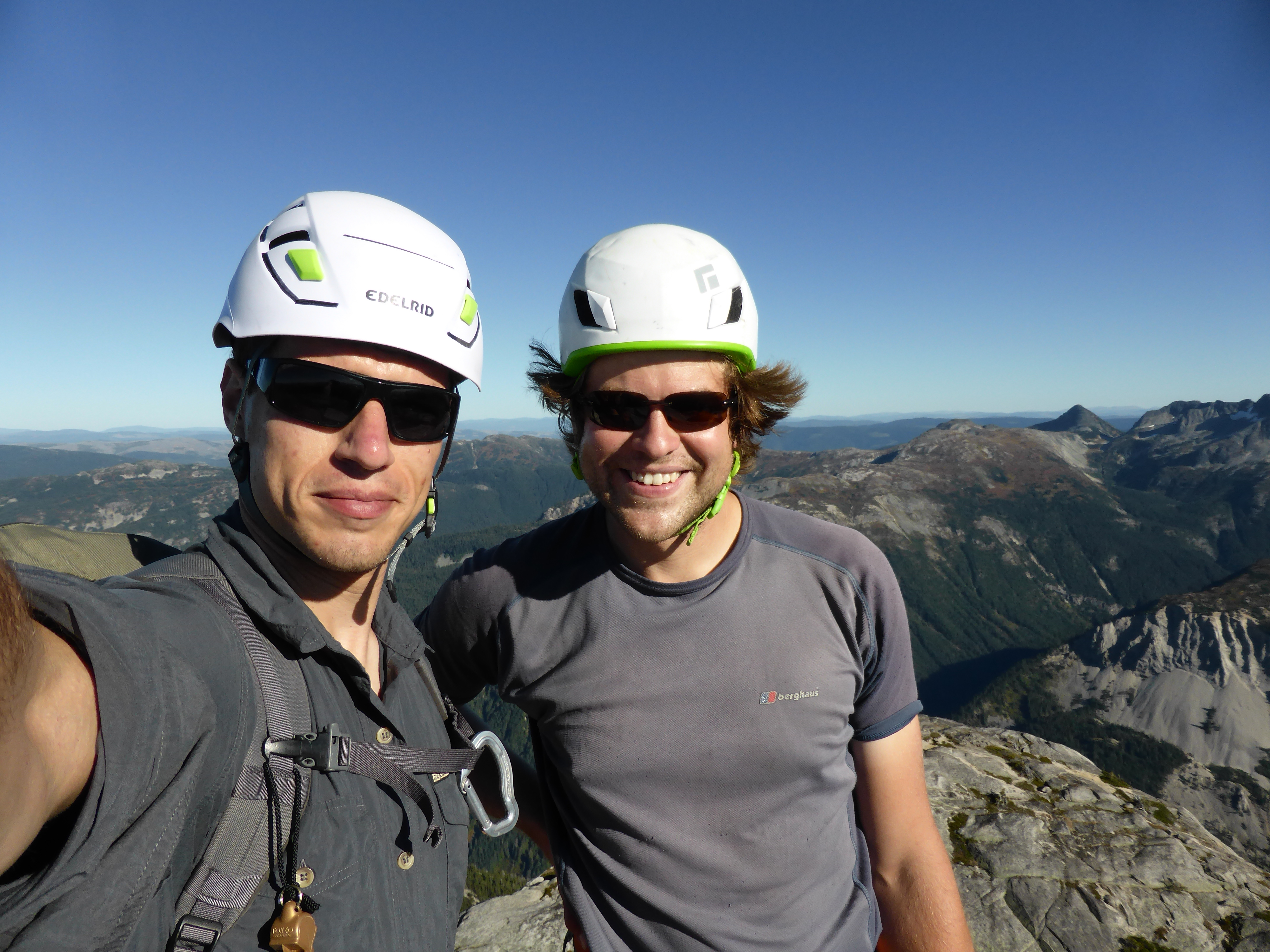