In search of an Epic on Shuksan 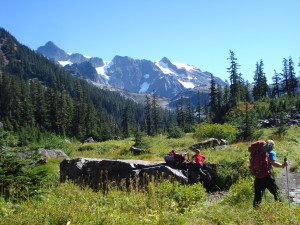 Lake Anne Meadows with Shuksan in the distance 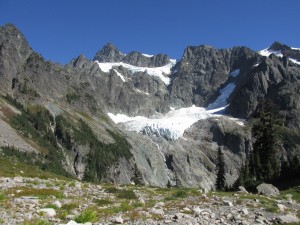 In the early mists of time, when the world was but a primordial soup, Alex and I made a plan to go climbing. As the months drew by Alex suffered many a sleepless night (due to the arrival of his son, Amund, not from fear of the coming adventure!) and I was sure that this arrangement would never come to pass. On my part, I made a good attempt to renege on this promise by severely twisting my ankle, but it healed quickly and Amund behaved himself to allow his dad out for his first mountaineering trip of the year. Steph had been keen for another attempt on Shuksan so, as a merry band of three we headed down to Washington to climb what Fred Beckey describes as ‘the crown jewel of the Cascades’ by the uber-classic Fisher Chimneys. 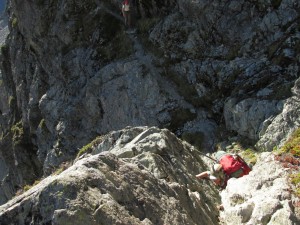 Scrambling in the chimneys – Note the aerials sticking out of my pack as a tertiary defence against getting lost, if our 2 GPSs failed I was able to connect directly to the satellites

Much had been made of the potential for epics on this mountain, and good route finding was critical at all stages. With this in mind we spoke to veterans of epics, studied every trip report we could lay eyes upon and carried a small librarys’ worth of pictures and descriptions up the mountain. Armed with 2 GPSs and an altimeter, 2 maps (admittedly one was for Duffey Lakes) and a compass we felt over-qualified to deal with anything the mountain threw at us! To our surprise, all it had to throw at us was a path. Yup, we found a well worn path all the way from the trailhead to our bivy at the top of the chimneys. It was that easy; we just walked, stopped for a swim and scared some tourists at the lake by baring our white arses to all that couldn’t get away in time, walked some more, ate berries, scrambled on awesome rock to the top of the chimneys. Sweet, what was all the fuss about? In fairness the conditions were great – there was no snow in any of the gullies and visibility was 100% under glorious September sunshine – but it was almost disappointing how straightforward it all was. 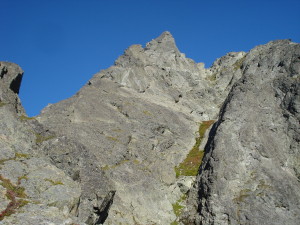 Upper section of the chimneys, and the last of the berries 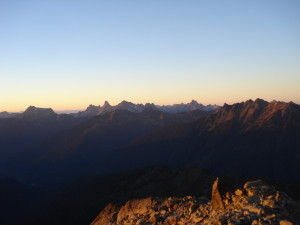 Sunset over the Cascades

After watching us knock over the pan spilling half the water, Steph took over my cooking duties which left Alex and I plenty of time to do nothing and enjoy an awesome sunset over Baker and the North Cascades (thanks Steph!!). One useful thing we did was contemplate the meaning of the empty tent that was sharing our bivy site with us. We came to the conclusion that its inhabitants were having an epic on the mountain, and since we could do nothing about it we went back to enjoying the sunset. It turns out that our musings were indeed correct This we learned when two enthusiastic young mountaineers stumbled back to camp at midnight boasting of having spent a totally awesome 17hrs getting to the summit and back. Mmmm, more bad tidings, we could only assume that we were too late in the season and the glacier was totally broken up and we’d have to worm our way round miles and miles of open crevasses. None of us felt motivated enough to either get some useful information out of them and/or tell them to shut up. Instead, we just lay listening to their bromantic tales (punctuated with the occasional hugs) about how they were lucky to be alive and how they would sleep so well after such an adventure. Eventually they did and we got back to our intermittent sleep between swirling gusts of wind. 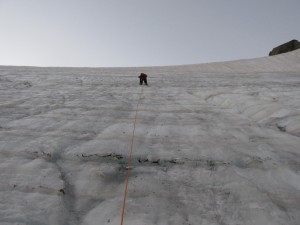 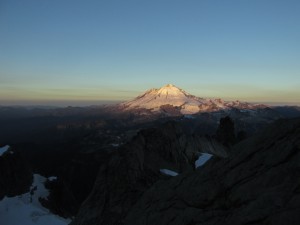 With a worse night sleep than even Alex was used to, we rose a wee bit later than planned and discussed the impending doom that we were about to lead ourselves into. Hey-ho, we’ll just have to go and have a look – we had hints that our bivy companions were quite inexperienced, and since we were carrying two GPSs we surely couldn’t fail! With a hop, skip and a swing of my ice tools we were up Winnies slide and confronted by a group of a gazillion people camping on a second perfect bivy site looking directly across the seracs of the Upper Curtis glacier. We greeted them as we passed through their camp, wished them a pleasant day and before they could say hello we were climbing onto the Curtis and admiring the incredible scenery of the mountain. Too much gazing at the jaw-dropping crevasses was not advisable as we were soon forced to jump a few cracks and climb in and out of a few smaller gaps, all of which Steph led us through without any mishap. We then dropped down towards Hells Highway which was indeed one hell of minefield – but on the plus side pretty much all the snow bridges had collapsed so the holes were obvious. We climbed a steep snow slope on the right-hand edge of the Highway which wasn’t really protectable by ice-screws or pickets, and Alex pointed out that we really should have some Scottish winter pro, like a buried whisky bottle! 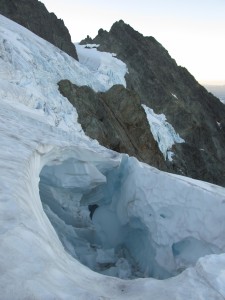 The Upper Curtis and Hells Highway 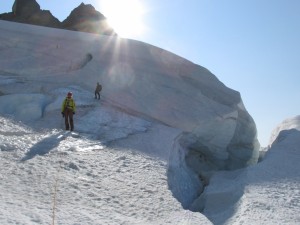 Without further ado, we were passed the second crux and the summit pyramid was in view – a mere 3hrs after leaving camp. How, we asked ourselves, had it taken those muppets 17hrs? As if just for adventures sake we eventually screwed up our route finding and gained the south ridge of the pyramid way too low, learning just how time can disappear when you get lost. We observed two obvious pinnacles, discussed how it could be tricky to pass them, and then ignored this and casually aimed to join the ridge below them, as it looked less steep than anywhere else. Not only were we mindful of the difficulties we may encounter but there were other parties amassing under what looked like an obvious gully system leading directly to the top – pah, what do they know!? Clearly a lot more than we did. What started with nice scrambling soon turned into sketchy down climbing and traversing, after which we found ourselves under a steep pile of choss that gave us a few moves of 5.6ish to the top of the second pinnacle. From here we made use of rap tat left by others who had obviously fallen into the same trap, and dropped back down to where we could traverse into aforementioned obvious gully to the top! What followed was 100m or so of top notch scrambling on sound rock and a beautiful summit. The Summit Pyramid, we took the right hand skyline, the easiest way is centre right of the triangle Great views of Baker from the summit

Then a long descent, where we down climbed the two steep icey sections and remained roped up all the way back the bivy. We had a quick stop at camp to pack away our gear and have a blether with some aspirant guides who were 7 days into their final assessments and hoping to finish with some sweet routes on the north side of Shuksan. The scramble down was fairly uneventful, except for when Stephs eagle eyes spotted the one berry left by the crowd of guides, which she duly devoured. We had to rappel one 10m section and from the bottom of the chimneys booked it back to the car, stopped for blueberry pies at Grahams in Glacier and boosted back to town content with our endeavours, though slightly disappointed it was all so straight forward! 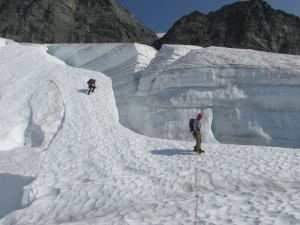 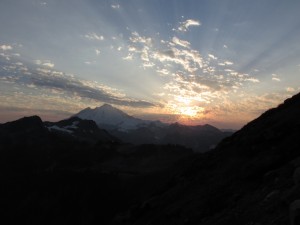 3 Responses to In search of an Epic on Shuksan